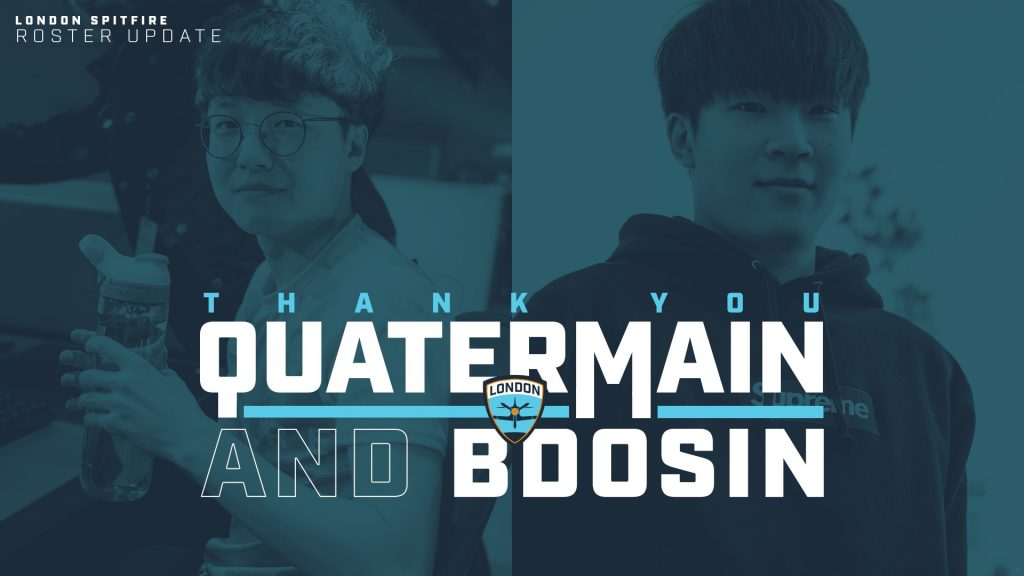 Today, we mutually part ways with Quatermain and @BdosinOW.

Thank you to the duo who supported our team during the #OWL2019 Season – we can’t wait to see what your future holds for you! 💙 pic.twitter.com/GmOJSu84Nx

This offseason has been a liquidation sale of sorts for the Spitfire. They have released a total of eight players so far, including DPS players Jihyeok “Birdring” Kim and Juyoung “Profit” Park, and Tank players Jaehui “Gesture” Hong and Junho “Fury” Kim. Now, their main support duo is gone as well. All of London’s 2018 Overwatch League Champions squad is no longer with them.

After their win of the inaugural OWL season, London struggled to recreate that success. 2019 saw them only make two out of four playoff brackets. Their highest placement was a 5th-8th finish in Stage 2. After Stage 4, London managed to barely escape the play-in stage but then went winless in the main playoffs for a 7th-8th place end to their season.

Yunghoon “Krillin” Jung is the sole remainder from the 2019 roster. London have also signed Kim “Fuze” Tae-hoon and Se-won “BERNAR” Shin from the Philadelphia Fusion academy team. Even with this, the London Spitfire now boasts a roster of just three players.

While there is still time in the offseason for teams to finalize their rosters, the London Spitfire are seemingly not even close to that point. Whether their plan results in another team competing for the top or a team tanking at the bottom, London have to play their cards soon.