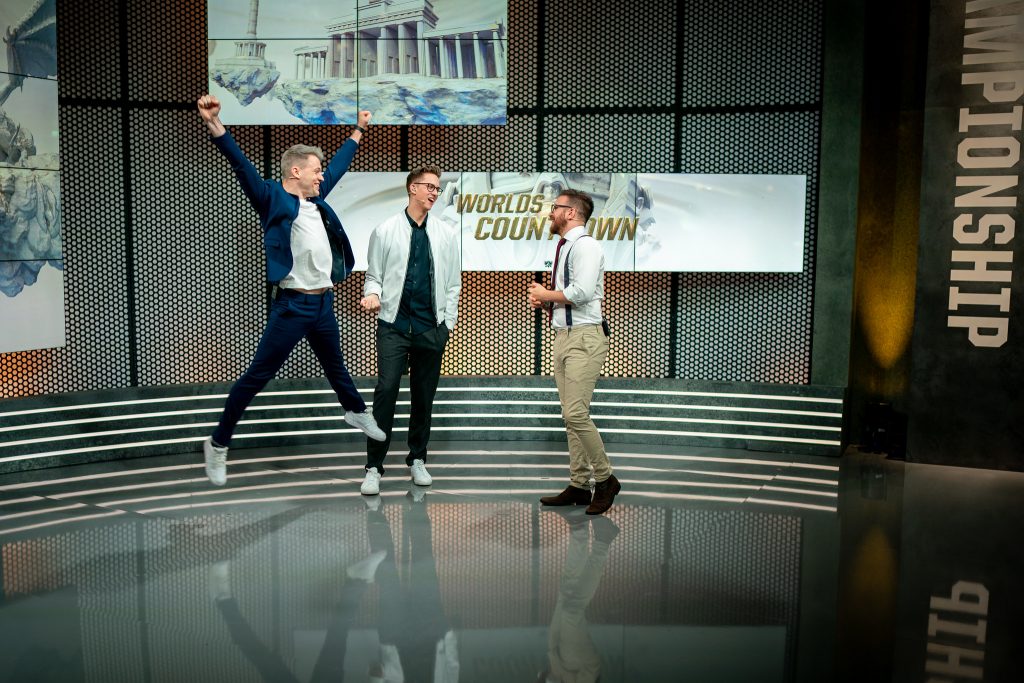 With play-ins finished, four teams should be jumping for joy as they advance in the LoL Worlds 2019. (Photo by Michal Konkol/Riot Games)

The Play-in Stage of the 2019 League of Legends World Championship has officially come to a close. All four number one seeds advanced from the Knockout Stage, meaning DAMWON Gaming, Clutch Gaming, Hong Kong Attitude and Splyce have joined the sixteen-team field that will fight for the ultimate crown in competitive League of Legends. Let’s review where we are so far in Worlds 2019:

The opener of the Knockout Stage proved that winning would not be a given for even the most overwhelming of favorites. DAMWON Gaming exited the Group Stage looking more like a championship contender than a team that still needed to play their way into the big dance. But Lowkey Esports weren’t afraid in game one, even as they fell behind early.

LK bot laner Nguyễn Phước “Celebrity” Long Hiệp took advantage of Tristana’s insane late-game scaling, coupled with an upgraded Ornn item, to pull off the biggest single-game upset of the stage. DAMWON Gaming had a huge 5.4k gold lead at 16 minutes and picked up three infernal drakes, but squandered it all through a series of sloppy plays and overconfidence. LK ended the game down 16 kills to 25, but left with a win.

DAMWON Gaming tightened up after that opening loss, turning back into the juggernaut we saw in the Group Stage. They went on to win the next three games, none being particularly close. Game three ended even on kills at 14 apiece, but DAMWON had built a 7k gold lead by 19 minutes and were up more than 10k gold when they closed the game, courtesy of their superior CS numbers and a nine-turret-take advantage.

Clutch Gaming left the Worlds 2019 Play-ins group stage looking the most vulnerable of the one seeds, having lost twice to the Unicorns of Love before winning the first-place tiebreaker. Whether it was UOL’s unconventional picks that threw them off or they’ve gotten more comfortable as the tournament has progressed, Clutch Gaming has no issues dismantling Royal Youth three games to zero.

The series was so non-competitive that we have to look to the opening minutes of game one to see the only time that Royal Youth had a gold lead across the series. At 3 minutes into game one, RYL had an 84 gold lead. Clutch Gaming, overcoming that massive deficit, then led the next 91 minutes of game time en route to the series win.

CG’s Cody “Cody Sun” Sun continued his redemption tour after being benched in 100 Thieves’ 2018 World Championship run. The star bot laner finished this series deathless, going 23/0/12 on Kai’Sa and Lucian in the series.

Hong Kong Attitude made their region proud one more time, defeating Isurus Gaming three games to one to advance to the Main Event. The League of Legends Master Series, known as the LMS, is dissolving to combine with Southeast Asia’s LST to form the SEA Tour in 2020. HKA now bring the LMS’ third team to the Main Event in their last hurrah.

An easy game one win for HKA was expected, but Isurus Gaming bounced back with a game two win. ISG took control at a dragon fight 15 minutes in. ISG mid laner Édgar Ali “Seiya” Bracamontes Munguía’s Akali picked up a triple kill and started the snowball, resulting in three infernals and two mountain drakes for ISG. They took their lone win of the series in 33 minutes.

HKA were not dominant in kills in their final two wins, besting ISG by only one in each game, but their lane pressure and map movements allowed them to push their leads nonetheless. This was never more evident than their final play to win the series in game four. Two members of HKA held up three members of ISG at dragon while HKA’s other three pushed the ISG Nexus turrets. ISG could not defend against the burst damage of Syndra and Veigar, allowing HKA to destroy the base before the other members of ISG could return to defend.

Despite the defeat, ISG top laner Mateo Alejandro “Buggax” Aroztegui Zamora had a phenomenal series, finishing with a 15/10/8 K/D/A.

The last series of the Worlds 2019 Play-ins was the most hotly contested of the four, going the full five-game distance. The LEC’s Splyce and LCL’s Unicorns of Love fought over the hearts of Europe, each determined to be their third representative at the Main Event. In the end, it was Splyce that were able to secure the game five win and guarantee the LEC three teams in the Group Stage.

Unicorns of Love were the most feared two-seed in the Knockout Stage, and they showed why in game one of the series. They fought off a nearly 8k gold lead from Splyce to continue scaling until their combination of Gangplank, Kayle and Kai’Sa could no longer be contained in the late game.

Splyce bounced back to win games two and three. They were in control for a majority of these games, winning in kill count handily and needing only 30 and 31 minutes to send UOL to match point.

UOL’s jungler Kirill “AHaHaCiK” Skvortsov busted out Karthus for game four to great success, taking advantage of Nocturne’s inability to invade him to scale up. UOL controlled this game through aggressive play and forced a deciding game five.

Splyce held a small lead throughout the game, but were having a hard time extending their advantage. They made their way to Elder Drake at 37 minutes, securing it before turning onto UOL. Kasper “Kobbe” Kobberup’s Kai’Sa ulted to UOL’s backline and Andrei “Xerxe” Dragomir’s Qiyana cleaned up to give Splyce a 5-for-1 ace and entrance to the Main Event.

The sixteen-team field is now set for the Main Event of the 2019 World Championship. Four groups of four teams will battle it out in a double round-robin to advance to the quarterfinals. The Group Stage begins Saturday, October 12 and concludes on Sunday, October 20.

Make sure to follow Hotspawn throughout the League of Legends World Championship for continued coverage.