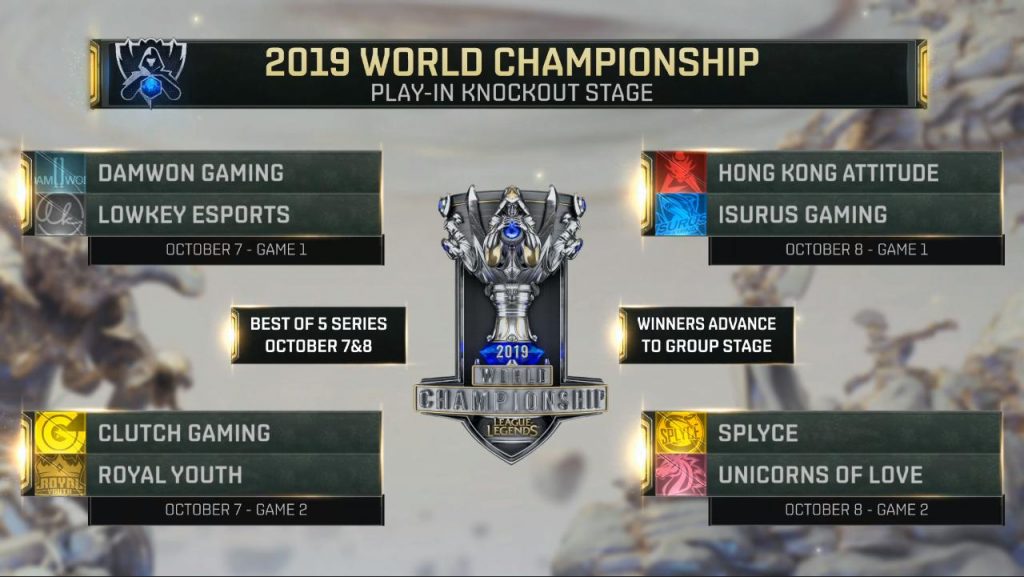 The first week of LoL 2019 Worlds Play-Ins has wrapped up. (Image via Riot Games)

The first week of the League of Legends 2019 World Championship has concluded. Eight teams have earned a chance to play a best-of-five for a ticket to the Main Event, while four have been sent home. With each group shaking out a bit differently, week one of LoL Worlds 2019 has had many storylines to follow.

Group A started us out hot with a rock-paper-scissors group. Clutch took their two games off of Mammoth, Mammoth off of UoL and UoL off of Clutch. Due to a game-length tiebreaker, Clutch was saved from third seed, leaving UoL and Mammoth to play for their lives. This time, UoL found their stride and knocked Mammoth out of the tournament. The final tiebreaker match also went the opposite of usual with Clutch taking down UoL and earning first seed.

.@Huni has a message for the fans here at the @LEC studio 💛 pic.twitter.com/I4fCqk1sHs

Group B was a much more standard affair, with the LEC team in Splyce being a cut above the minor region teams. Splyce locked first seed after a 3-0 start. DFM, on the other hand, went 0-3, deciding the group entirely before the final matches. In an act of defiance, the Japanese squad refused to go home without a win. They pulled off an upset win against Splyce, going out in a glorious blaze.

In a similar fashion to Group B, the major region’s third seed advanced at the top spot. The difference came in the fact that after day one of the group, all the teams were tied at 1-1. A day’s rest later and HKA had fixed their prevailing issues and sailed to first seed. Unfortunately for MEGA, they couldn’t do the same and exited the tournament with just one win.

The most polarizing group of the play-ins stage shook out with the Korean squad dominating their opponents. DAMWON earned the only 4-0 sweep of the week and look poised to qualify for the Main Event. However, the race for second seed was an interesting one. Both Royal and Flamengo took a game off of each other, forcing a final decider match.

The only tiebreaker outside of Group A ended with the Turkish Royal side sending the Brazilian Flamengo squad home.

After the final eight play-in teams were decided, a draw was held to decide which first seeds faced which second seeds. The result is:

While most of these are expected to go cleanly in the way of the first seeds, there are a couple of potential upsets that could send some unexpected teams through. Especially Splyce vs UoL, which is affectionately being dubbed an EU vs EU grudge match. Coverage starts on October 7th at 7:00 a.m. EST (1:00 p.m. CEST) on Twitch.