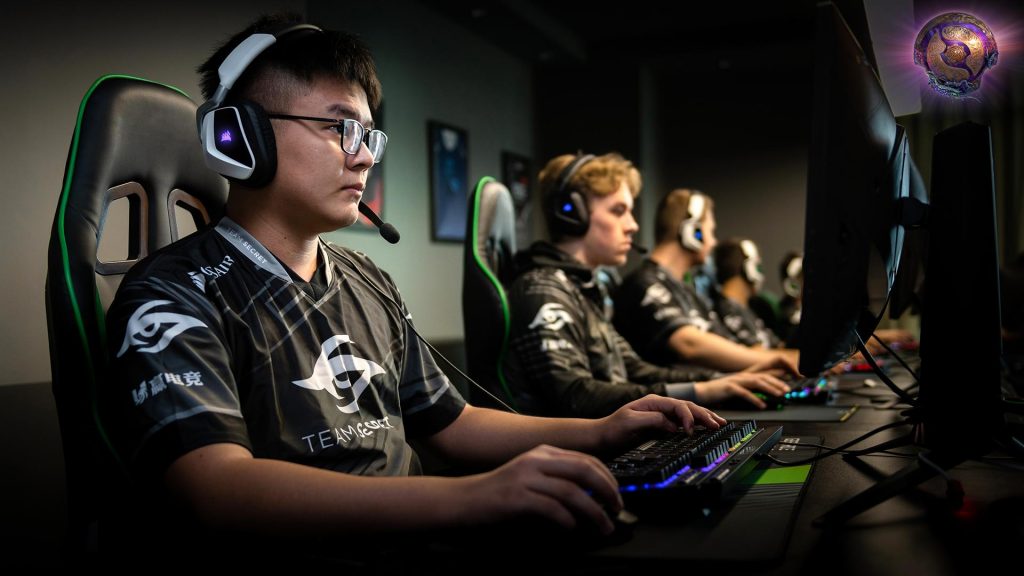 Team Secret looked unstoppable on day one of TI9. (Image via Team Secret)

It’s finally here, The International 2019, the biggest event in the Dota 2 calendar. After waiting over a month since the end of the Dota Pro Circuit, fans finally get a chance to see the best in the world battle it out for supremacy. And even after just a single day of group stage games, TI9 has proved to be full of thrilling games, with unexpected results. Day one of TI9 was played out in five heats, with four series played simultaneously. Each set of series featured teams from one group, beginning with Group A, then Group B, then back to Group A and so on.

Without further ado, here are the scores on the door from the first day of world championship play.

Group A – Series Set One

Liquid Gh claims the First Blood of The International 2019. #TI9

Liquid looked incredibly weak versus a Newbee team that shouldn’t have given Liquid as much trouble as they did. This was certainly not the only matchup of the day in which a top team was pushed to the limit by an underdog squad. These were not short and easy games, but instead a pair of 40-minute slogs that Newbee had to finish off methodically. In particular, Yawar “YawaR” Hassan played out of his mind in these two games, first on Sven, and then on Gyrocopter. Even without winning lanes, he was able to dominate the late game.

Secret baited Alliance into not picking Broodmother in game one, with a Kunka first pick, only to later pick up the spider hero for themselves. Faced with a greedy scaling team, Alliance crushed in the early game, as Michał “Nisha” Jankowski seemingly found himself caught again and again on Arc Warden. However, the considerable lead created by the early game dominance wasn’t enough, as Yeik “MidOne” Nai Zheng’s Broodmother took control of the game, defeating Alliance. In the second game, Secret would not leave things to scale too late, showing off their ability to close games out in quick fashion, and taking the series.

LGD blew out Chaos EC in the only match result that went as expected in the first set of series. The Chinese side showed precisely why they’d earned a plethora of podium and top-five finishes this year. They dismantled a Chaos squad that, yet again, seems to be playing as individuals rather than a cohesive team.

In a pair of games that would put the fourth stream behind schedule for the rest of the day, Keen and TNC had an absolute brawl, which saw two almost hour-long games. TNC remained in control for the majority of the games, but Keen Gaming frequently looked poised to turn things around and snatch victory from the jaws of defeat. Of particular note was the fantastic play of Wang “old chicken” Zhiyong, leading the charge on every comeback attempt. But in the end, TNC proved to be too much for their Chinese opponents.

Vici Gaming vs. Royal Never Give Up, 2-0

Vici is definitely one of the favorites to win the tournament and proved why in this incredibly strong showing versus RNG. A slow start in game one suggested that Vici would take time to find its feet at TI9. But after a stellar performance from Zhang “Paparazi” Chengjun on Gyrocopter in game two, Vici finished up the series with a 2-0 record.

Virtus.Pro vs. Ninjas in Pyjamas, 2-0

In a game that proved that Virtus.pro had turned up to play, the Russian team defeated Ninjas in Pyjamas in a pair of slow and methodical games. Relying on big cooldowns and wombo-combos in both games, VP used picks such as Enigma, Kunkka and Centaur Warrunner to focus down key NiP targets and pick up the win. NiP had no answers and looked to be on a much lower tier than VP when it came to map rotations and patient gameplay.

In an incredibly disappointing showing, Evil Geniuses failed to land a blow against Fnatic. A team that would have been considered an even matchup for EG during the DPC. Fnatic dismantled the North American team, with scaling heroes whose attack speed and raw damage proved too much. EG had no answer to the siege by the 30-minute mark in each game and lost shortly after that.

In the first draw of the day, defending champions OG managed to hold a tenacious former championship side to a respectable 1-1 finish. For OG, it was the potent combo of Anathan “ana” Pham and Topias “Topson” Taavitsainen that secured the first victory. In game two, however, Na’Vi struck back with a Viper pick that proved just too much to handle for OG.

Welcome to The International 2019 Dota 2 Championships from Shanghai! We wish all contenders the best of luck as the first day of Group Stage begins. #TI9 pic.twitter.com/Hfj9rHAKSp

The expected grudge match between Chaos’ MATUMBAMAN and his former team rapidly descended into a one-sided stomp, at TL attempted to make up for the day’s past poor performance. While the first game was somewhat competitive, game two was complete destruction, and Team Liquid proved why they’d secured an early invite to TI9.

In a Southeast Asian showdown, TNC, the new hope for the region, took on the veteran representatives Mineski. And incredibly, it was the open qualifier team, Mineski, who took away the win. TNC fought valiantly against their regional rivals, but Mineski triumphed, thanks to both a better set of drafts and their game plan execution.

Keen Gaming has already shown they aren’t on the level of some of their fellow Chinese teams. Here, LGD was sure to push home that point with an exclamation mark on it. Wang “Ame” Chunyu looked almost too comfortable on both his Templar Assassin and Sven, quickly picking off his opponents. However, neither game was a complete stomp. Keen Gaming managed showed off their high-tempo style of play and demonstrated an ability to compete at the highest level.

Newbee has already set itself up as the hope for NA at TI9. An incredible win versus Team Liquid proved they have what it takes to hang with the “big boys.” But there’s always a bigger dog out there. And in this case, it was Team Secret. One of the most promising favorites to win the tournament, Secret is not prone to making the same mistakes that a TL had in their loss to Newbee. And while Newbee pushed and again put on one of the most impressive showings that anyone has against Team Secret in a long time, the team was unable to convert it into a win. Team Secret look incredibly strong so far.

There were signs once again of the unreliability of late-season Virtus.pro, as the Russian team allowed a draw against one of the “second-tier” of Chinese teams. Royal for their part executed on a fantastic gameplan, rallying around Gao “Setsu” Zhenxiong’s Outworld Devourer to ultimately secure victory against a Virtus.pro who had overcommitted to it’s Io/Invoker picks.

EG and Na’Vi both had disappointing opening series in the tournament. And with everything to prove in their second match-up, what resulted was a two-hour war between these teams. Game two went for 80+ minutes, with neither squad willing to lose. But in the end, EG managed to clutch out their first victory, while Na’Vi had to settle for their second draw of the tournament. EG has underperformed this TI thus far, and without a stellar day two could already be looking at early elimination.

After a draw against Na’Vi, the defending champions almost deserved a comfortable victory. And against Infamous, that’s precisely what they got. The South American representatives were just not on OG’s level, even if this is not the same caliber of team that made a miracle run last year. Game two was the shortest of the tournament so far, and Infamous fell in just 19 minutes.

In their second series of the day, Vici again looked like top contenders to win the tournament. Even in game two, as Fnatic’s Abed “Abed” Yusop attempted to launch a comeback with his Arc Warden, Vici never looked too pressed. This was partly due to the sheer dominance of Zhou “Yang” Haiyang’s Windranger, which picked apart his opponent’s team.

Secret and Liquid faced off in what was a perfect example of how much better Team Secret is than the rest of its EU counterparts. The team made short work of Team Liquid, who had already struggled against Newbee and not immediately put down Chaos EC. What’s more, it did so with two wildly different drafts that showed Secret is prepared to experiment ahead of their almost-guaranteed trip to the playoffs.

.@teamsecret really showing why they're the DPC leaders. One of the best teams at playing from behind I've seen in a long while. #TI9

TNC is rightly being heralded as a sleeper pick to win TI9. Faced with one of the strongest performers of the early parts of the tournament, they had a chance to prove their worth. In game one, they did just that, robbing LGD of an undefeated day, as Armel “Armel” Tabios ran amuck with his Ember Spirit. But in game two, LGD showed why they’d been undefeated up until now. A Sven/Ogre Magi combo proved too much to handle, LGD secured the second game.

Alliance has, confusingly, both under and over-performed so far. The team pushed Team Secret to the limit in their opening game, proving they have what it takes to defeat top teams. However, against a Chaos Esports that was simply unable to match up with any of their previous opponents, Alliance faltered. In game one, the team failed to draft an answer for the late game potency of Dragon Knight, leading to a hard loss. In game two, this mistake was rectified, and Alliance grabbed their first win of the tournament.

In spite of a series of disappointing games to start the tournament, Keen finally came online with the super fast-paced gameplay they excel at. A win against Mineski proved that their TI9 spot wasn’t just a fluke. Keen are best when they’re in the driver’s seat and dictating when and how the game happens. But against their previous opponents, that just wasn’t possible. Against Mineski, they could do as they pleased. With Song “dark”’ Runxi Shadow Demon providing a solid supporting backdrop for the team, they 2-0’d one of SEA’s strongest teams.

Day 1 at #TI9 is not disappointing! I feel like EVERY game I'm seeing different hero prioritization and I LOVE IT!! #dota2

You can see the current in our tables below. Be sure to check out all the group stage action for day two on Twitch and visit Hotspawn again for more coverage of all things The International 2019.

Group A – Day One Standings

Group B – Day One Standings