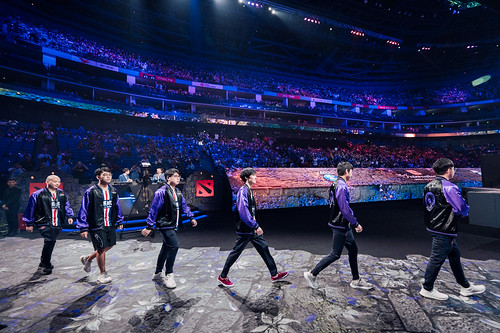 PSG.LGD look to make a dramatic return to the DPC despite their continued roster issues. (Photo courtesy Valve)

PSG.LGD have once again shuffled their roster just hours ahead of the start of the ESL One Los Angeles Major China Open Qualifier. The squad released details of their new lineup in an announcement in the early hours Wednesday morning.

The line up of @PSGeSports team for ESL One Los Angeles 2020 Major China Open is as follows:

With hours between the initial announcement of this finalized roster by LGD and the start of the Chinese qualifiers for the ESL One Los Angeles Major, initial hope for the team’s performance was limited. However, LGD have surpassed expectations already, scoring an initial win in their opening game.

ESL Dota 2 Los Angeles Major China Open Qualifier, @PSGeSports First match of the day is in the bag! Chalice was unable to be killed!

LGD have been largely absent from the Dota 2 international scene this season. Apart from a lone appearance at the ONE Esports Dota 2 World Pro Invitational Singapore, the squad has missed almost all international competition. After their third place finish at The International 2019, the team missed out on the Chengdu Major, instead focusing on regional tournaments. Then in the overcrowded DreamLeague Season 13 Opens, they fell in the best-of-one bracket after an unlucky loss to FTD.apollo.

For the rest of the Chinese region, LGD’s absence has been a welcome reprieve. One of the top teams in the world last season, in missing several DPC events, LGD have allowed the likes of Vici Gaming, Invictus Gaming, and others from their region to flourish. Now the squad looks to return to their winning form with a qualification to ESL One Los Angeles.

LGD’s qualifying efforts will continue throughout Thursday, with a trio of victories needed to send them to the closed qualifiers. More news on LGD’s roster moves can be found on their official social channels.