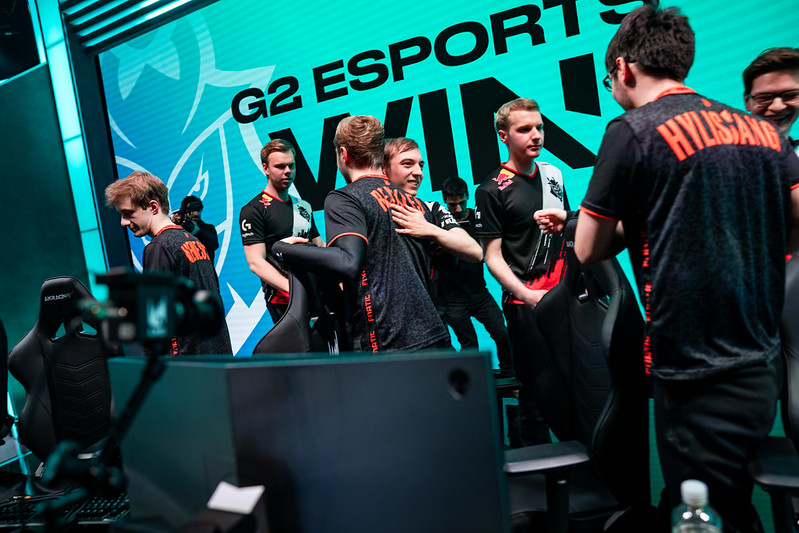 The League of Legends European Championship (LEC) has concluded the third week of the 2020 Spring Split. G2 Esports continue to pace the league with a 6-0 record, while Team Vitality and FC Schalke continue their downward spirals to 0-6. We take a look at where things stand in the LEC by looking at the top story lines so far in Europe.

The two best LEC teams in 2019 met for the first time this season in a rematch of the 2019 Summer Finals. Though he played against them several times last year, it was also the first time Rasmus “Caps” Winther would be facing his former teammates in his new role.

G2 Esports picked up First Blood bot lane after over aggression from Fnatic. Zdravets “Hylissang” Iliev Galabov and Martin “Rekkles” Larsson engaged on Mihael “Mikyx” Mehle, but Martin “Wunder” Hansen had teleport advantage to turn the fight around. Wunder picked up the first kill on Rekkles and Caps flashed after his old teammate Hylissang to secure the double for G2.

Fnatic responded with their own pair of bot lane kills. Tim “Nemesis” Lipovšek and Oskar “Selfmade” Boderek visited bot lane to repel a G2 push and pick up kills on Marcin “Jankos” Jankowski and Caps. Hylissang attempted to pick up a third on Mikyx under turret, but Mikyx survived with almost full health and taunted Hylissang by spam dancing. Only seconds later, Wunder and Luka “Perkz” Perković failed a dive of their own top lane, resulting in Gabriël “Bwipo” Rau spam dancing in response.

G2 broke the game open at 23 minutes. Fnatic failed to catch Wunder in their jungle while Perkz was top lane, giving him enough time to recall to base and teleport behind Fnatic. Rekkles was separated from the team and blown up to start the fight. Fnatic tried to collapse on Perkz, but his Stopwatch bought enough time for G2 to rally around him. In all, G2 picked up all five members of Fnatic, taking a 5k gold lead and denying Fnatic their fourth dragon.

A Baron later and G2 had enough power to close out the game in 32 minutes. Caps finished 6/2/15 in his first matchup with Fnatic’s bot lane, while Hylissang had a rough 1/8/3 showing on Nautilus.

With Fnatic’s loss and Origen’s loss to Misfits Gaming, G2 Esports now have a two-game lead over the rest of the LEC. As promising as Fnatic, Rogue, Origen, and the rest look, there is no disputing that G2 stand alone in a different tier in Europe.

Even though the offseason is often a time for optimism, there was cause for concern for FC Schalke 04. Losing the trio of Elias “Upset” Lipp, Lee “IgNar” Dong-geun, and Kim “Trick” Gang-yun was not ideal. Still, the replacements seemed promising. Konstantinos “FORG1VEN” Tzortziou and Han “Dreams” Min-kook seemed like an above-average LEC bot lane, while Erberk “Gilius” Demir has still shown the skill to rank highly on the EUW solo queue ladder.

The results through three weeks are a disaster. Schalke, a prominent preseason playoff pick, have yet to win a game and are 0-6 to start the season. They got absolutely destroyed in a 16 kills to 0 match against Misfits Gaming before falling to the struggling SK Gaming 18 kills to 6. S04 aren’t just losing, they’re now getting dominated and losing to non-playoff teams.

S04 tried to mix things up by calling up Lukas “Lurox” Thoma in place of Gilius, but the team looked even worse. That’s not because Lurox looked any worse than anyone else on the team, but S04 were even more stagnant in the mid game. They slowly bled kills and objectives as Misfits and SK walked all over them.

S04 are reminiscent of a weaker version of the 2019 Misfits. They should be much better on paper, but the team doesn’t work well together. You can’t point to any one player as holding the team back. Dreams is struggling to find the right engages. FORG1VEN is dying too often to telegraphed ganks. Felix “Abbedagge” Braun is having mental lapses resulting in him getting caught out. There is no easy solution to fix the team’s problems.

Misfits Gaming gave their team all of the Spring Split and most of the Summer Split to figure it out. They never did. S04 have already tried one shakeup that saw their performance further decline. With less heralded players and no early wins to build optimism, it wouldn’t be surprising to see more changes coming sooner rather than later.

It wasn’t unfair to say Mad Lions E.C. downgraded their roster this offseason. Tamás “Vizicsacsi” Kiss retired, while Andrei “Xerxe” Dragomir and Kasper “Kobbe” Kobberup moved to free agency. They were great players and coming off a World Championship appearance. The replacements, though, don’t look too bad so far as MAD have raced out to a 4-2 start on the season.

For an even more impressive win, MAD Lions followed it up with a victory over Rogue. Sure, they benefited from Rogue’s stunning decision to leave Soraka open for a second straight game, but MAD still needed to capitalize. Orome went 0/1/14 on the ambulance, allowing Humanoid and Matyáš “Carzzy” Orság to aggressively dish out the damage. The two combined to go 13/3/10, aided by Zhiqiang “Shadow” Zhao’s impressive 4/2/11 Gragas performance.

I've been eating 10 bananas a day for a week in preparation for today pic.twitter.com/lYsnSLyjfY

Carzzy, in particular, has been making a huge impact so far for MAD. The rookie ADC is already one of the better bot laners in Europe, showing an ability to carry a team out of the gate. His 9.85 CS per minute ranks third among LEC ADCs, while his 453 gold per minute is second only behind Rekkles. Given that he’s only fourth in gold share, it shows that MAD isn’t just funneling him gold — Carzzy is earning advantages on his own.

It may be a surprise that MAD are 4-2 to open the season, but they’ve earned their way here. With so many teams relying on rookies in the LEC, anything can happen in the fight for the playoffs. MAD will get big tests against the powerhouses Origen and Fnatic in week four.

Misfits Gaming have pulled off four straight wins to come in as the hottest team in Europe outside of G2 Esports. Fabian “Febiven” Diepstraten is in the midst of a career resurgence and will have a fantastic match-up against Perkz. Rookie jungler Iván “Razork” Martín is gaining confidence in his play and showing off his high-level mechanics. He’ll get his first taste of playing against Jankos in the LEC.

A pair of 4-2 teams face off in a battle for second place. Fnatic traded blows with G2 early before falling apart, while MAD are fresh off an upset over Rogue. Bot lane will be important in this one, as both teams are reliant on the position to carry. It will be interesting to see how Humanoid and Nemesis fare against each other in their first match-up of their sophomore seasons. Selfmade’s aggressive play on champions like Lee Sin could be key for Fnatic to get out to an early lead.