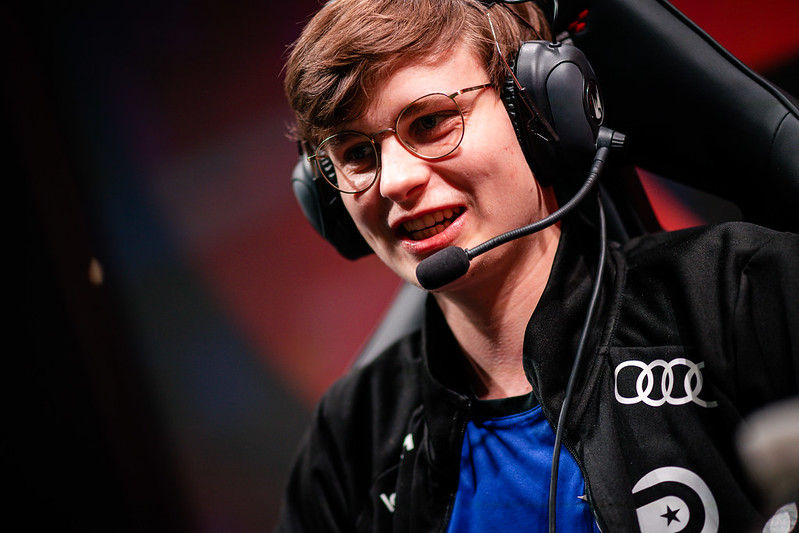 The LEC has concluded the sixth week of the 2020 Spring Split. Origen, Fnatic and G2 Esports all finished 2-0 to keep pace at the top of the standings. Meanwhile, Excel Esports beat MAD Lions in a game that could have important playoff implications. We take a look at where things stand in the LEC by looking at the top story lines so far in Europe.

Origen USES BACKDOOR TO STAY IN TIE FOR FIRST

Origen needed two wins to keep pace at the top of the LEC and got both against FC Schalke 04 and Rogue. Their first game against S04, though, came down to the wire and ended with a backdoor that would make their boss, Enrique “xPeke” Cedeño Martínez, proud.

The game started out slow, as both Origen and FC Schalke 04 are tied for the longest average game time in the LEC at 36.5 minutes. First Blood didn’t come until 15 minutes in, when Felix “Abbedagge” Braun’s Syndra killed Erlend “Nukeduck” Våtevik Holm’s Nautilus in a fight for dragon. S04 then made a couple of picks in a fight for Baron vision before securing the objective at just under 30 minutes. Their third drake a minute later put them on Soul point. Which was especially important because Ocean Soul is the most powerful of the four Souls.

As S04 pushed bot, Origen responded with a team fight win, giving them breathing room to reset for the next set of objectives. With a pick onto Andrei “Odoamne” Pascu in mid lane, Origen secured the next Baron. Meanwhile, the rest of S04 set up around dragon and began to burst it down immediately upon spawn. Origen got there in time to contest, but Lukas “Lurox” Thoma smote it down in time to secure Ocean Soul for S04. Origen won the ensuing fight, but the permanent power belonged to S04.

OG used their Baron power to take down top inhibitor, but S04 took it to them in the next team fight mid. Minions took S04’s first Nexus turret, prompting Barney “Alphari” Morris’ Aatrox to teleport to the base to try to end the game. Alphari took the second turret but was repelled by backs from Abbedagge and Nihat “Innaxe” Aliev’s Aphelios.

With the man advantage, S04 rushed Elder Dragon and turned to Baron. S04 had all three inhibitors back up, but Elias “Upset” Lipp still decided to teleport for the backdoor. S04 committed to finishing Baron but Andrei “Xerxe” Dragomir stole it away, preventing S04 from getting empowered recalls. With no teleports available, nobody could get back to base to stop Upset and the OG ADC ended the game.

🇬🇧 @UpsetOG teleports for the base push and win. What a game!

Origen had a much less eventful second game of the week against Rogue. Xerxe was active on Gragas early, setting OG up for a lead they would never relinquish. OG took their usual slow, methodical approach to never allow Rogue back into the game. OG secured three Infernal drakes for Infernal Soul, giving their composition centered around Corki and Aphelios a huge DPS boost. Upset finished 3/0/5 and OG cruised to a 10 kills to four win in 34 minutes.

EXCEL GET IMPORTANT WIN OVER MAD

Excel Esports faced off against MAD Lions in a game with important playoff implications. In a possible season saving win, Excel beat MAD to improve to 6-6 and move to only one game out of the playoff picture.

The most important play of the game happened before minions even spawned. Excel grouped as five and moved into the top river for a level one invade. Whether by great preparation or a good bit of luck, Tore “Tore” Hoel Eilertsen’s Thresh threw a blind hook into MAD’s lane brush and hit Zhiqiang “Shadow” Zhao’s Olaf. Son “Mickey” Young-min’s Tristana was donated First Blood and the timing of the early death set Shadow behind in the jungle.

Things only went worse for MAD as they attempted a dive on Ki “Expect” Dae-han’s Renekton at 12 minutes. Shadow tanked enough damage that Marc “Caedrel” Robert Lamont’s Karthus Requiem from across the map killed him, while Expect killed Matyáš “Carzzy” Orság’s Kalista before going down. Meanwhile, the other four members of Excel were pushing top and mid turrets and farming both sides of the jungle. By the end of the play, Excel were already up 3k gold in 13 minutes.

With their lead, Excel controlled vision around Baron and took it down before MAD noticed at 23 minutes. MAD aced Excel on their attempted Baron push, but only minutes later Excel secured Cloud Soul after MAD mistimed their invulnerabilities to Karthus Requiem. Excel used their fight win to end the game through bot lane, winning with a 17 kills to nine lead in under 29 minutes. Caedrel finished 8/2/7, while Mickey dealt a game-high 17.5k damage in a 5/2/9 performance.

A superb performance from the team as we move to 6-6 in the #LEC Spring Split standings.

While both teams finished the week 1-1, Excel will be much happier with the final results. Excel are now 2-0 against MAD on the season, giving them the head-to-head tiebreaker if the teams finish the year tied. With such a muddled middle of the table, that could be huge for Excel, especially after they dropped their second game of the year to Rogue.

Fnatic, G2 Esports, and Misfits Gaming all entered week six tied with Origen for first place in the LEC. With OG’s 2-0 week, the three teams needed to be perfect to keep pace. Fnatic ended that hope for MSF in their first game of the week, while G2 Esports cruised in victories over a pair of bottom table teams.

Fnatic versus Misfits entered with a lot of hype, but the gameplay itself was rather one-sided. Tim “Nemesis” Lipovšek’s Veigar opened the game with First Blood on rookie of the split candidate Iván “Razork” Martín’s Pantheon. After helping mid, Gabriël “Bwipo” Rau’s Gangplank walked back top and solo killed Danny “Dan Dan” Le Comte’s Sett. Within the first five minutes of the game, Fnatic already had a 5 kills to 2 advantage with a 1.2k gold lead.

It might not seem insurmountable, but it was a big problem for Fnatic to get so far ahead early. Pantheon jungle is meant to play from ahead, so Razork was an easy target for Fnatic when he fell behind. Couple that with the incredible scaling of Gangplank, Veigar, and Aphelios, and Fnatic made the game non-competitive. Though they only held a 20 kills to 12 lead in the end, Fnatic needed only 28 minutes to knock down MSF’s Nexus.

It was a similarly one-sided game for Fnatic against FC Schalke 04. They didn’t get going until a double kill bot at 11 minutes, but they never looked back from that gold lead. Martin “Rekkles” Larsson atoned for his early season Aphelios losses by dominating in his second straight game, picking up a triple kill in the game ending fight and finishing 9/1/4. Nemesis’ Diana never picked up a kill of her own, but she supplied the damage with a game-high 19.3k dealt to S04.

This Split is prime @RekklesLoL. He's your @AMD MVP once again.

Two more multikills takes him to 12 for Spring.

G2 Esports started their first 2-0 week since week three with a quick 26 minute win over SK Gaming. It was a typical scrappy G2 game, operating at more than a kill-per-minute pace. The tipping point occurred at 15 minutes in top lane. G2 chased Kim “Trick” Gang-yun up the river and committed all five members to the fight. Picking them off one-by-one, G2 eventually dove all the way past SK’s inner turret (while the outer turret was still up) to pick up an ace and 5k gold lead. G2 ran away with the game from that point in a 19 kills to 8 win.

Unsurprisingly, G2 played another bloody game against Team Vitality to close the week. Rasmus “Caps” Borregaard Winther and Mihael “Mikyx” Mehle ran an unconventional double exhaust bot lane to compensate for their non-farming Senna ADC. It worked out just fine as the duo survived laning phase and the top half of the map ran wild on Vitality. Luka “Perkz” Perković picked up a pair of double kills in his first Akali game of the season to pace the team. With this 7/2/5 showing, his combined K/D/A across both games totaled 12/2/16 for an impressive week.

The first of G2 Esports’ two games against the other first place teams in the LEC. This will be a very interesting stylistic clash between G2’s heavy chaotic, skirmish heavy style and Origen’s slow, methodical pace. Origen have the firepower to match G2 in every lane, but they might not have the synergy to make the snap decisions G2 can force. On the flip side, OG will have no problem closing out a lead if G2 get sloppy in the early-mid game — something G2 have been known to do.

The final regular season matchup of the two biggest rivals in the LEC. G2 crushed Fnatic in their week three meeting, but Fnatic have since been the hottest team in the league. Zdravets “Hylissang” Iliev Galabov has recovered from his slump that saw him go 1/8/3 in the first meeting, but he and Rekkles need to be counted on to win bot lane. These teams have the fastest average game time and highest total kills in the LEC, so expect action early and often.