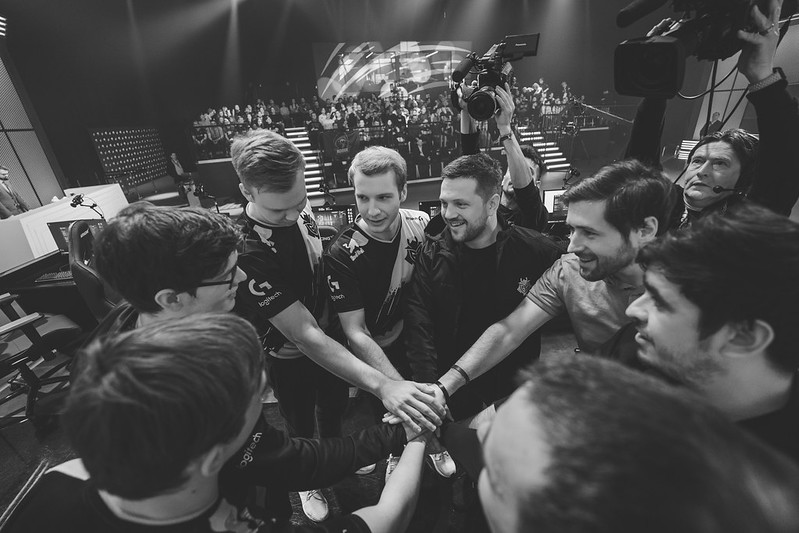 The LEC has concluded the seventh week of the 2020 Spring Split. G2 Esports took back control of first place with wins over Fnatic and Origen. On the flip side, three teams have officially been eliminated from playoff contention. We take a look at where things stand in the LEC by looking at the top story lines so far in Europe.

Three teams entered LEC week seven tied for first in the LEC: G2 Esports, Fnatic and Origen. Though G2 already held the head-to-head record against both, their three losses to middle table teams left them vulnerable to losing their spot atop the league. But in their toughest week of the season, G2 rose to the occasion, defeating both Origen and Fnatic to take sole possession of first place.

Marcin “Jankos” Jankowski was on fire in G2’s opener against Origen. Combined with Martin “Wunder” Nordahl Hansen’s Sett they picked up First Blood on Barney “Alphari” Morris’ Gangplank at 4:45 to get the ball rolling. He then showed his synergy with Rasmus “Caps” Borregaard Winther’s Ezreal by kicking Elias “Upset” Lipp’s Aphelios straight into a Trueshot Barrage for another kill.

In addition to his clean ganks, Jankos made sure to secure objectives for G2. He picked up all four elemental drakes, giving G2 Cloud Soul at only 25 minutes. G2 used that spike to secure Baron a minute later and a team fight win on the back end. Jankos sniped out Upset with a Sonic Wave to eliminate OG’s top damage threat. A forced 4v4 team fight at Elder Dragon minutes later secured the win for G2.

Coming off his dominant performance against Origen, G2 put their faith in Jankos against Fnatic. G2 picked Olaf and surrounded him with enchanters in Yuumi and Janna top. Fortunately for G2, Wunder is no stranger to picking support tops, as this was his fifth support pick in 14 games.

Though Jankos helped Caps secure First Blood, Fnatic were in control for the majority of the game. Part of that can be attributed to weak early lanes, but Fnatic used their great Gragas and Rakan engages to dictate a lot of the early action. G2 were often caught on the back foot as they lacked the engage to start fights on their own terms.

Fnatic were up 4k gold at 27 minutes when they started Baron. It made sense: Fnatic had vision control, G2 were slow to react, and Jankos’ Olaf didn’t have flash to get into the pit. Unfortunately for Fnatic, nobody thought to pop the Blast Cone behind Baron Pit. Jankos seized his opportunity and stole Baron after Oskar “Selfmade” Boderek smote Baron down to 13 health. Jankos died for his effort, but G2 used the buff to take several turrets and even up the gold.

NEVER COUNT US OUT 👊

A fight in mid lane at 33 minutes sealed the game for G2. Fnatic couldn’t burst through the Yuumi heals and Janna shields before G2’s sustain won out. On the back of another heroic performance from Jankos, G2 beat Fnatic 11 kills to 6 in 34:40.

With their wins, G2 now have virtual two-game leads over Fnatic and Origen because they hold the head-to-head tiebreaker over both. With only two weeks remaining in the regular season, G2 can clinch the number one seed with a perfect week eight. They’ll face two teams fighting for a playoff spot in Rogue and Excel Esports.

While the top half of the standings remain packed together, three teams have separated themselves from the rest of the LEC. Not in a good way. Team Vitality (1-13), SK Gaming (2-12), and FC Schalke 04 (3-11) have all officially been eliminated from playoff contention with two weeks left in the season.

The #LEC Standings after Week 7 🔥

Team Vitality underwent a major transformation in the offseason, but the results have not followed. The team parted ways with head coach Jakob “YamatoCannon” Mebdi, Daniele “Jiizuke” di Mauro, and Amadeu “Attila” Carvalho in favor of bringing up some younger prospects. Unfortunately, their preferred mid laner Aljoša “Milica” Kovandžić has yet to play in a game due to visa issues, forcing Lucas “Saken” Fayard into the starting lineup.

Vitality tried switching things up, bringing on Marcin “Selfie” Wolski and Pierre “Steeelback” Medjaldi this week, but the team continued their losing ways. VIT pushed Excel Esports to 42 minutes, but Rogue destroyed Vitality 16 kills to three in only 24 minutes. Vitality will continue experimenting with their roster as they look to the Summer Split.

SK Gaming knew they were in for a transition period after losing Selfmade and Han “Dreams” Min-kook in the offseason, but they must have expected better than this. Losses to S04 and Fnatic dropped them to ninth place on the season. Kim “Trick” Gang-yun looks like he’s on his last legs, despite being the only player on the roster signed through 2021. Juš “Crownshot” Marušič is worth building around, but SK need to fill in more talent around him.

FC Schalke 04 made their roster changes early on in the season, but things haven’t gotten much better. Lukas “Lurox” Thoma replaced Erberk “Gilius” Demir in week three before Nihat “Innaxe” Aliev replaced Konstantinos-Napoleon “FORG1VEN” Tzortziou in week four. S04 lost to MAD Lions before beating SK Gaming to pick up their third win of the season. It will be interesting to see if S04 try to re-insert FORG1VEN into their lineup with a revamped roster for Summer, or continue with the more team-focused Innaxe.

Rogue took care of business in their first game of the week against Team Vitality. While that was somewhat of a formality, their real test came against MAD Lions. The teams entered the game with matching 8-5 records, but MAD held the tiebreaker with their week three head-to-head win. This time, Rogue came out on top to inch their way closer to locking in a Spring playoff berth.

Rogue started the game by throwing a curveball in their draft. They put mid laner Emil “Larssen” Larsson on the marksman Tristana and bot laner Steven “Hans Sama” Liv on the mage Syndra. Both would have been strong kill lanes paired with Nautilus, but Syndra offers more crowd control and burst without having to jump into melee range.

Hans Sama avoided an early gank bot with a simple flash, allowing Rogue to respond with an early tower dive on Andrei “Orome” Popa to give Finn “Finn” Wiestål’s Sett First Blood at three minutes. Only two minutes later, Rogue called down all five members to bot lane to pick up an easy dive on Matyáš “Carzzy” Orság and Norman “Kaiser” Kaiser. Zhiqiang “Shadow” Zhao picked up a counter kill at the end, but Rogue crashed a large wave and took a very early 2k gold lead.

The teams converged to fight over Rift Herald at 16 minutes, neither wanting to concede the objective. MAD finished it off with a nice combo from Shadow, but Rogue easily won the ensuing fight. Finn’s Sett applied massive crowd control and damage with a Facebreaker into The Show Stopper combo. Rogue picked up four kills, and despite losing the Rift Herald, left with a 5.5k gold lead at 16 minutes.

It was a pretty simple close from there. With such a gold lead, Rogue had engage tools from Sejuani and Nautilus to force any fight they wanted. Tristana has excellent siege potential, while Syndra offers the burst to pick off targets. Rogue didn’t concede a single kill after the laning phase, beating MAD 20 kills to 2 in only 28 minutes. All three of Rogue’s carries — Finn (5/0/8), Larssen (8/0/7), and Hans Sama (3/0/14) — finished deathless.

With the win, Rogue moved themselves into a tie for fourth place with Misfits Gaming. Fortunately for Rogue, they’ve won both games against Misfits, so they own that tiebreaker. Rogue have a tough week eight against top teams G2 Esports and Fnatic.

Both teams are coming off impressive LEC wins and 2-0 weeks. G2 Esports need to close the season strong to wrap up the one seed, while Rogue are still fighting to earn a playoff berth. Rogue have actually had better early games than G2 so far this split, so they definitely have the laning power to make things interesting. Rogue have been unwilling to have Finn play support top laners, so it will be interesting to see if they leave Sett up for Wunder to first pick.

Both MAD Lions and Misfits Gaming are coming off tough playoff positioning losses to end week seven. Misfits won their week five matchup, so another win over MAD will virtually guarantee they will finish ahead in the standings and clinch a playoff berth. It will be a battle of contrasting priorities, as MSF want to play through mid laner Fabian “Febiven” Diepstraten, while MAD prefer to play through star rookie Carzzy.