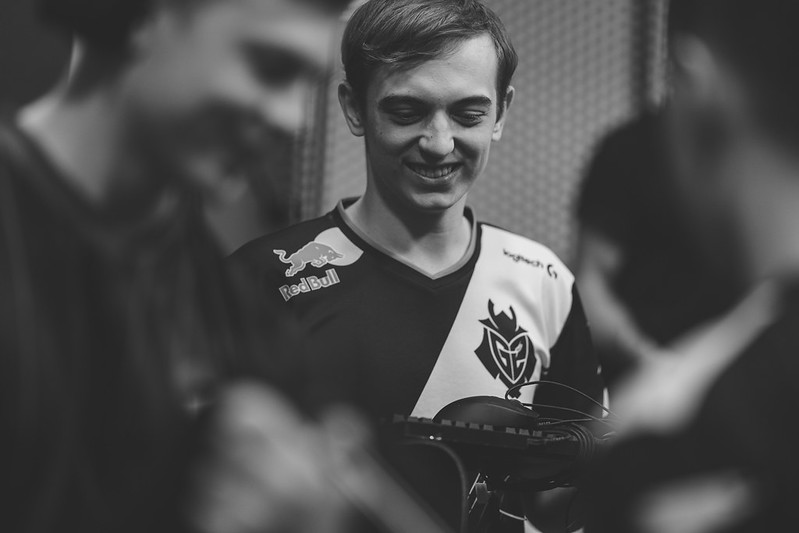 The League of Legends European Championship (LEC) has concluded the seventh week of the 2020 Summer Split. G2 Esports continued their mastery of Fnatic, taking a 2-0 week to move back over .500 on the season. Meanwhile, FC Schalke 04’s four game win streak has them chasing a playoff spot heading into the final week of the regular season. We take a look at where things stand in the LEC by looking at the top story lines so far in Europe.

Though it’s considered the best rivalry in European League of Legends, there hasn’t been a lot of competition between G2 Esports and Fnatic in 2020. After Fnatic pushed G2 to a game five in the 2019 Summer Finals, G2 have not lost to Fnatic again. That includes both regular season matchups in the Spring, a 3-0 Spring Finals victory, and the first game of the Summer Split.

This kind of one-sided dominance between teams, though uncommon, isn’t unheard of. Fnatic may have looked to Gen.G and their big win over T1 in week five for inspiration. Both teams certainly weren’t hurting for motivation as they each entered 7-7, neither having secured a playoff berth. Still, the game was seemingly more important for Fnatic, for the same reasons Gen.G needed to beat T1 to prove they could do it. There’s no doubt that this was Fnatic’s biggest game of the season.

Unfortunately for Fnatic, the result was the same as the previous six matchups in 2020. Fnatic kicked things off with a great First Blood on Luka “Perkz” Perković’s Caitlyn, but it turned sour quickly. Oskar “Selfmade” Boderek’s Lee Sin was in position to counter gank Marcin “Jankos” Jankowski’s Volibear, but Selfmade extended too far under G2’s turret chasing the kill, giving the momentum right back to G2. Jankos used that early kill to pick up a pair of kills top, grab the Rift Herald, and start the snowball for G2.

Rasmus “Caps” Winther’s Leblanc took over from there, becoming an assassination machine. With Lee Sin so far behind and building damage, Fnatic five squishy targets for Caps to feast on. Caps took advantage, building a Mejai’s Soulstealer and fighting his way to an 8/2/6 score. Perkz also recovered to deal a game-high 25.5k damage, leading G2 to the 25 to 9 kill victory in 34 minutes.

This was the G2 Esports we’ve been accustomed to seeing the past two years. Outside of a slip up by the bot lane early in the 2v2 early, G2 were in control for the majority of the game by roaming Jankos and Caps around the map. G2 also took care of Team Vitality in their first game of the week, giving them their first 2-0 since week two of the split. At 8-7, G2 have put themselves in a great position to make the playoffs with one week to play. No matter what their record ends up, no team will want to play the LEC champions in the first round of the playoffs.

On the other side, this was a crushing loss for Fnatic. Not only did it drop them to a game below .500 on the season, the game was not competitive. Selfmade, who has been one of Fnatic’s most consistent performers along with Martin “Rekkles” Larsson, had his worst game of the season, going 1/7/1. Tim “Nemesis” Lipovšek had a pair of critical mistakes as well, erasing the memories of his improvement in week five. Zdravets “Hylissang” Iliev Galabov added seven more deaths to his season total of 71, giving him an incredible 30 more deaths than the next closest LEC support.

Fnatic are still in playoff position at 7-8, but they have left themselves little margin for error in the final week of the season. They play the red-hot FC Schalke 04, Excel Esports, and SK Gaming in their final three games of the season.

FC Schalke started the season 0-8. A win over Fnatic to close week four ensured that they would not go winless on the split, but subsequent losses to Rogue and SK Gaming in week five seemed to seal their fate. At 1-10, there was no real reasonable way to expect S04 could make the playoffs. Even if it was mathematically possible, nothing in their play suggested an imminent turnaround.

When FC Schalke 04 beat both G2 Esports and Misfits Gaming in week six, it was seen as more of an indictment on the current state of the two expected playoff teams than S04. Obviously S04 had improved to get to this point and were celebrated for being competitive, but a 3-10 season-long record doesn’t earn you respect.

But now, after wins over Excel Gaming and Origen in week seven, we have to ask: are FC Schalke 04 a playoff team? Their 5-10 record is still bottom of the league, but they are now only two games behind Fnatic and Excel for the final two playoff spots. With games against Fnatic, Team Vitality, and MAD Lions in week eight, S04 have a real shot — even if they’d need to win out — to make the playoffs.

S04’s opening win over Excel Esports came featuring a pop-off performance by ADC Matúš “Neon” Jakubčík. Playing Senna, Neon managed to deal a game-high 15.7k damage while going 7/0/3. That 10 of 12 kill participation was highest on the team as S04 took a quick 12 kill to 4 victory in 27 minutes.

S04 were then ahead by 7k gold against Origen when it looked like they might be on the verge of throwing the game away. After a couple of picks, Origen had five members alive and were in position to secure Baron. However, the double Smite combination from Han “Dreams” Min-kook’s Tahm Kench and Erberk “Gilius” Demir’s Lee Sin allowed Gilius to steal away the objective to keep S04 in control. They would need only a few more minutes to close it out after that, leading 17 kills to 5 in 35 minutes. Neon went 0/0/14 on Senna to complete a deathless weekend.

Much like nobody will want to face G2 Esports in the playoffs, it’s hard to imagine any team wanting to face FC Schalke 04 with their playoff spot on the line. S04 are now owners of the longest active win streak in the LEC at four games. With God Gilius at the helm, they’ll aim for three more and a playoff berth in week eight.

WITH SEASON ON THE LINE, MISFITS GAMING TURN TO DENYK

If not for the terrible slumps from G2 Esports and Fnatic this season, we’d be talking about Misfits Gaming as the most confusing team in the LEC. Coming off a 10-8 Spring Split that saw them finish fifth in the league, MSF made arguably the biggest upgrade between splits by replacing Ju “Bvoy” Yeong-hoon with Kasper “Kobbe” Kobberup. Even if Kobbe might not be quite as good as believed when he joined TSM this off-season, it was still undoubtedly an upgrade at MSF’s weakest position.

However, Misfits didn’t just plug Kobbe into the lineup. They ran tryouts at their support position, eventually opting to play Mads “Doss” Schwartz over Petr “denyk” Haramach because of his better lane synergy with Kobbe.

Though it might have looked that way in scrims, the results did not translate on stage. Misfits started the season 5-8, and though there were several problems on the team, Doss looked out of place in the LEC. He was often caught out of position, resulting in him having the second highest deaths among supports in the LEC.

Look out for him in the #LEC this weekend vs SK and XL!#MSFWIN pic.twitter.com/wnO4GnDpUX

It took until week seven, but Misfits finally made the switch to denyk. Though he finished an ugly-looking 1/8/7 on Sett in his re-debut, denyk actually played quite well. His engages and CC were crucial for Misfits to turn around an early deficit to SK Gaming, eventually coming back to win despite ending down 15 kills to 17. The second game was less promising, as his Alistar pick seemed doomed from the start. Denyk went 0/4/3 against Excel Esports as Misfits lost 10 kills to 5 in 33 minutes.

After a 1-1 weekend, Misfits Gaming still find themselves on the outside of the playoff picture heading into week eight. With a mixed bag performance from denyk, they have a big lineup decision as they make their final playoff push. They have an incredibly tough final weekend schedule featuring MAD Lions, G2 Esports, and Team Vitality. 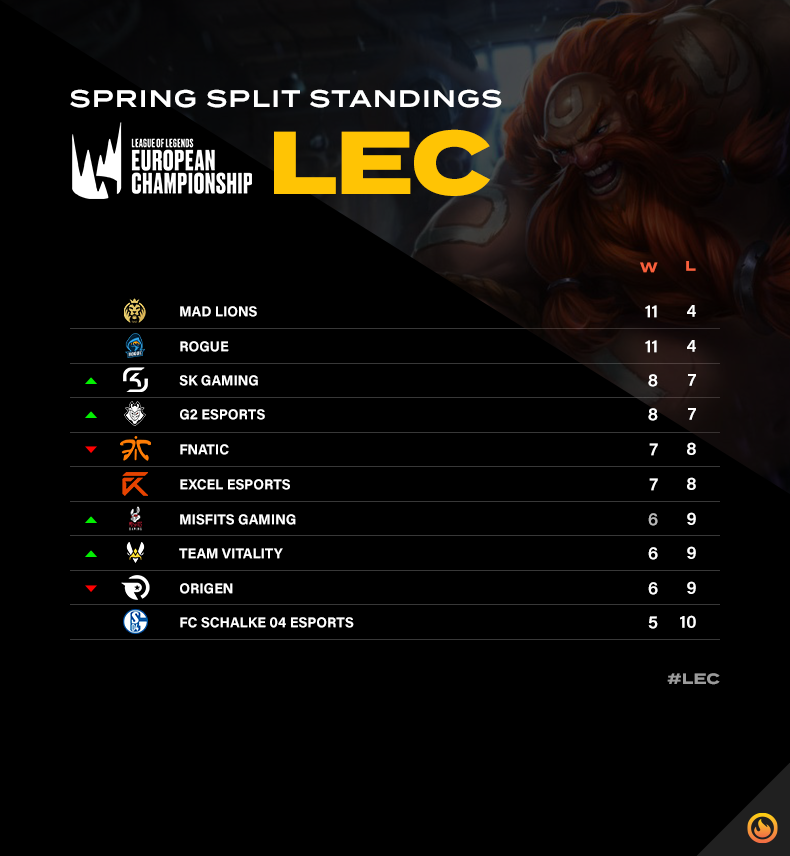 MAD Lions and Rogue remain the only two teams locked into a playoff spot heading into week eight. Tied atop the standings, the pair will get a shot at each other in the second game of the week. At 8-7, G2 Esports and SK Gaming are the next closest to clinching a playoff spot.

FC Schalke 04’s four game winning streak has made the race for the final playoff spots even more interesting. No team is eliminated from contention heading into the final weekend of the season. Spring Split playoff teams Misfits Gaming and Origen are on the outside looking in, while Fnatic is clinging to fifth place.

Who would’ve imagined only a couple weeks ago that this matchup would have huge playoff implications? Nobody in the LEC is hotter than FC Schalke 04, who ride a four game win streak into week eight. Gilius and Felix “Abbedagge” Braun are playing with a ton of confidence, while Neon and Dreams just aren’t giving up deaths bot lane. Meanwhile, Fnatic have struggled to do anything without Rekkles carrying them. Selfmade and Gilius’ jungle matchup will be the one to watch. Selfmade was brought to Fnatic to win critical games like this.

With both teams tied atop the standings heading into the final week, this matchup will probably determine the number one seed heading into the playoffs. MAD Lions won their first matchup in week three, meaning they will get the head-to-head tiebreaker with another win. Both teams like to play through their mid laners, as both Marek “Humanoid” Brázda and Emil “Larssen” Larsson are MVP candidates. Look for the junglers Zhiqiang “Shad0w” Zhao and Kacper “Inspired” Słoma to set the pace early.