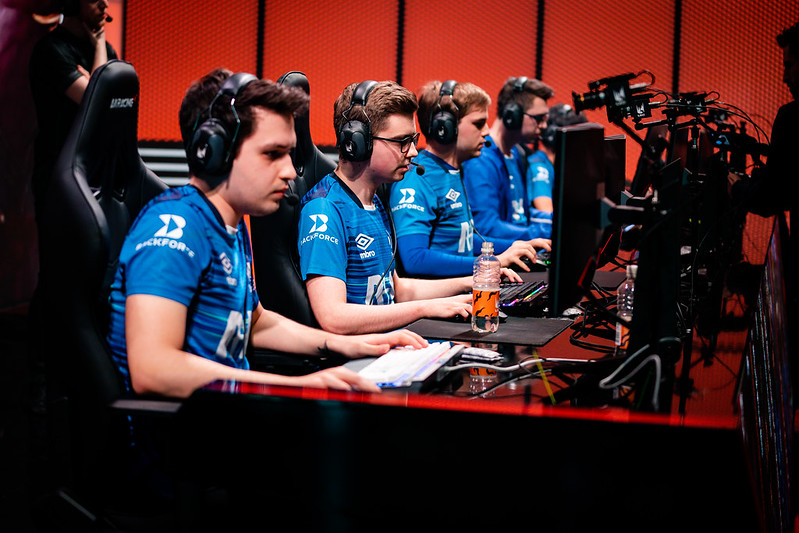 The LEC has concluded the fourth week of the 2020 Spring Split. FC Schalke 04 picked up their first win over G2 Esports, who also fell to Misfits Gaming to pick up their first two losses of the season. We take a look at where things stand in the LEC by looking at the top story lines so far in Europe.

This last week wasn’t a very good one for Schalke 04. After headlines following Konstantinos “FORG1VEN” Tzortziou quitting on the team and another lopsided loss to Rogue, they got exactly what they needed in a big win over G2 Esports.

The game got off to a good start at three minutes. G2 initiated a four-man dive bot, but a quick teleport from Felix “Abbedagge” Braun’s Cassiopeia made G2 pull off. With help from the turret and Ignite from Han “Dreams” Min-kook, Nihat “Innaxe” Aliev was able to pick up First Blood on Mihael “Mikyx” Mehle to start S04’s early snowball.

S04 continued their dominance early, picking up seven of the first nine kills in the game. Every aggressive G2 move was punished by an S04 teleport and turned around in S04’s favor. Fortunately for G2, their four to two turret lead allowed them to stay even in gold at 20 minutes. That and a sneaky two-man Baron at 20 minutes from Rasmus “Caps” Winther and Marcin “Jankos” Jankowski actually gave G2 a gold lead despite losing out on every early skirmish.

Still, S04 pressed on. They preyed on G2’s overextended side lanes, punishing Luka “Perkz” Perković and Mikyx to take an uncontested Baron at 27 minutes. With that buff in tow, S04 took G2’s mid inhibitor as G2 were unable to win any kind of 5v5 team fight. A well timed Perkz Realm Warp earned G2 a four for one fight win at 30 minutes, but G2 still trailed 14 kills to 7.

S04 picked up another Baron at 34 minutes to extend their lead. But even though they were winning every team fight, G2 weren’t going down easily. Perkz split pushed as often as possible, even taking two of S04’s inhibitors despite G2’s disadvantaged state. It looked like G2 might pull off another incredible comeback.

As S04 took their third Baron at 40 minutes, Perkz took another bot lane inhibitor. Martin “Wunder” Hansen teleported with him to attempt to end the game, but S04 were able to get back. Meanwhile, Abbedagge and Dreams pressed onto G2’s base and were finally able to put G2 away for good. It took a 27 kills to 8 lead and over 42 minutes, but S04 finally got the job done.

This was an incredibly important victory for the Schalke organization after the angst of an 0-7 start and two roster changes. Innaxe looked like he belonged, but more importantly, Dreams looked much more comfortable with him. Andrei “Odoamne” Pascu also popped off with a 7/0/9 performance after giving a very emotional interview to end week three.

After looking unstoppable in the opening three weeks, G2 Esports finally looked vulnerable in week four. It all started with a loss to the suddenly first-place Misfits Gaming in the final game of Friday’s action.

G2 actually got an early three for one trade on a Misfits bot dive gone wrong, but were never able to really build a lead from it. That was due in large part to Caps having his worst game as an ADC, and perhaps even as a pro. Caps died four times in the first 10 minutes of game action and was only getting started.

The gold stayed even through the early game until MSF won a fight and took Rift Herald and a run of G2’s turrets. From there, MSF absolutely dominated the game, picking up the final 9 of 10 kills and every objective along the way. Caps died five more times without ever picking up a kill, running his final K/D/A of the game to 0/9/4. His counterpart, Ju “Bvoy” Yeong-hoon, looked much better in a 5/2/10 performance on Xayah.

well. we watched that.

If that had been the only loss of the weekend, it could be explained away. Misfits Gaming have been on a surge, and with Caps off his game and Wunder’s Sona looking questionable at best, it could be chalked up to a one-off loss. However, the previously detailed loss to FC Schalke 04 left some questions to be answered for G2.

Sure, most other teams would’ve folded when unable to win team fights throughout the game. It’s a testament to their macro game that G2 even lasted as long as they did in the match. But S04 had been a disaster through three and a half weeks before ripping through G2 in every team fight. Even if G2 are known to get a bit sloppy in mid games from time to time, it was shocking to see them get out-team fought from even gold states.

You can blame the draft if you want, but G2 weren’t lacking in engage or damage. Ornn and Nautilus can start fights any time they want, and you can’t be backed by more damage than Ryze and Aphelios. Playing to the limits will always come at a cost, and G2 paid that price in this game by continually getting caught out in side lanes.

G2 are no stranger to losing head-scratching games in the regular season, so there’s no reason to panic yet. It would be surprising if they didn’t bounce back with a 2-0 week over Excel Esports and MAD Lions. But for at least one week, the once invincible G2 Esports were knocked down a rung on the ladder.

RAZORK AND CARZZY BATTLING FOR ROOKIE OF THE SPLIT

With all due respect to Petr “denyk” Haramach, the flashier roles of jungle and ADC have made the LEC rookie of the split a two-man race between Iván “Razork” Martín and Matyáš “Carzzy” Orság. Not only have the pair instantly joined the elite among their position in Europe, both Misfits Gaming (6-2) and MAD Lions (5-3) are exceeding expectations in a big way.

In addition to helping Misfits to a 2-0 week over G2 Esports and Team Vitality, Razork had another big week individually. His 8/2/6 Ekko was everywhere on the map against G2, including an awesome The Show Stopper and Parallel Convergence combo with Danny “Dan Dan” Le Comte’s Sett.

Through four weeks, Razork ranks in the top-three among LEC junglers in KDA (4.0), CS per minute (5.3), team damage percentage (16.4%), and gold percentage (17.5%). As you can guess from the numbers, he prioritizes farming and efficiency with his ganks as opposed to volume. That’s allowed him to be such a big threat for MSF in the later stages of the game without falling off.

Carzzy is coming off a more mixed-results week. He and Norman “Kaiser” Kaiser were outplayed by Elias “Upset” Lipp and Mitchell “Destiny” Shaw — who had his best game of the split on Leona — in MAD’s loss to Origen. But he and Kasier then beat up on Martin “Rekkles” Larsson and Zdravets “Hylissang” Iliev Galabov, finishing 5/2/10 on Miss Fortune.

As we noted last week, Carzzy’s early season numbers are impressive. He now leads LEC ADCs with 598 damage per minute and a 33.3% damage share, all while still holding only the fourth-highest gold percentage share. His ability to maximize damage in team fights without dying too early is beyond his years.

The two players will face off in the first match of week five of the LEC. On this high profile stage, whoever comes out on top will have the early leg up on winning the coveted rookie of the split award.

The two leading candidates for rookie of the split in Razork and Carzzy face off for the first time as professionals. Misfits Gaming have climbed all the way back to a tie for first-place after dispatching G2 Esports. Mid laner Fabian “Febiven” Diepstraten has looked as good as he ever has in his career. MAD Lions will need Marek “Humanoid” Brázda to be on his A-game to keep up.

The other two of the expected big three LEC teams will face each other for the second time this season. Origen wiped the floor with Fnatic in the opener, but Fnatic have been playing better of late. That said, Fnatic’s bot lane, particularly Hylissang, have been struggling at the same time that Destiny has been coming on. Gabriël “Bwipo” Rau may be left the final counterpick on red side to try to grab top lane priority for Fnatic.