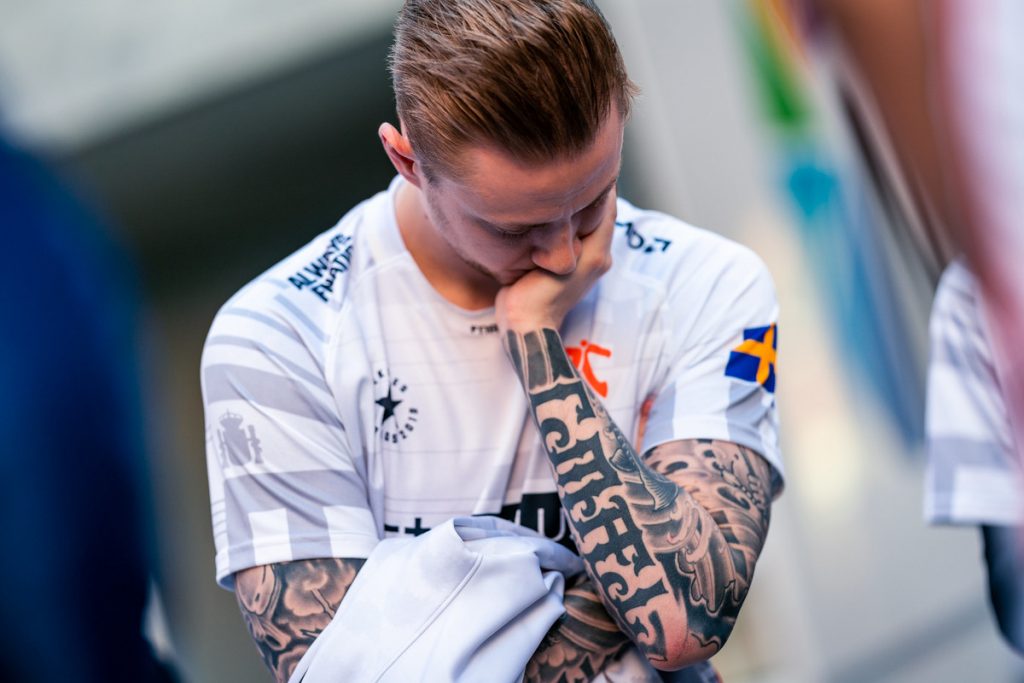 The League of Legends European Championship (LEC) has concluded the fourth week of the 2020 Summer Split. Fnatic and Origen continued their slow starts and head into the break at 4-5. Meanwhile, FC Schalke 04 picked up their first win of the season. We take a look at where things stand in the LEC by looking at the top story lines so far in Europe.

With all due respect to MAD Lions, Rogue, and every other promising team in Europe, there were still three big names to watch entering the Summer Split: G2 Esports, Fnatic, and Origen. They were the best three teams in the Spring Split regular season, retained all of their players, and only had more time for their rosters to jell. But we’re now halfway through the split and their combined record is a shocking 13-14. G2 Esports are 5-4 and have dealt with another lane swap and Luka “Perkz” Perković’s absence, so they can have a pass. Origen and Fnatic, though, have much bigger issues.

We wouldn't even make #LCS finals playing like that.

Fnatic did pick up a nice win over SK Gaming this week, snapping a four-game losing streak. But just when you think they might be getting some momentum, Fnatic follow it up with a loss to the previously winless FC Schalke 04. It’s fair to note that these are all professionals and no win is a gimme, but there is also a difference between losing to S04 in a close game and getting blown out 15 kills to 1.

Fnatic’s struggles have not been solely on any one player. Zdravets “Hylissang” Iliev Galabov has had one of the worst splits of his career, but it’s always harder to look good as an engage support when your team is struggling. Both solo laners Gabriël “Bwipo” Rau and Tim “Nemesis” Lipovšek have also struggled mightily, leaving a lot of the burden to carry on Martin “Rekkles” Larsson. Rekkles has played well, but Fnatic won’t be reaching their goals if they can’t get their solo laners out of their slumps.

Origen dropped both of their games this weekend to also drop to 4-5 at the halfway point. Their first loss to Rogue, while disappointing, wasn’t too bad. Rogue are now tied with MAD Lions atop the league and Origen made them work until 46 minutes to secure the win. Origen would have liked to continue their dominance over Rogue, but there’s no reason to panic from a loss to them.

Origen have a history of disappearing in the Summer Split — just look at 2019 — so the team will hear that narrative as they try to turn things around in the second half of the season. They have tough games against Misfits Gaming and G2 Esports when the LEC resumes in two weeks.

NOBODY BEATS SCHALKE NINE TIMES IN A ROW

This has been one of the most competitive splits in recent LEC history. Only three games separate first from ninth place after four weeks, resulting in a five-way tie for the final two playoff spots. That tenth team, FC Schalke 04, started the season 0-8 and looked to be the only team without a chance to make the playoffs. However, S04 picked up their first win at the halfway point in the season to head into the week break with that burden off their backs.

That win was over none other than Fnatic. S04 got off to a quick start with a cheeky level one collapse on Hylissang’s Nautilus. Andrei “Odoamne” Pascu’s Wukong and Erberk “Gilius” Demir’s Lee Sin wrapped around through bot lane while Han “Dreams” Min-kook’s Leona hid in the dragon pit. Caught in a pincer, Hylissang blew his flash before ultimately going down to Gilius for First Blood before minions spawned.

Fnatic got a kill back on a bot lane dive at 3:30, but it would be their one and only kill in the entire game. S04 picked up 14 consecutive kills and led from start to finish. Gilius was aggressive and proactive, going 3/0/7 on Lee Sin and earning the game MVP. Every S04 player picked up three kills, including Dreams’ Leona.

Even with Fnatic’s struggles, it may have seemed like a big upset to most, but S04’s head coach Dylan Falco was not surprised. He told our Tom Matthiesen after the game: “I think our viewpoint on this week, compared to the public’s view when they see us going into this week going 0-7, was a bit different. Internally, we’re doing very well in scrims. Coming into this week, we were looking to pick up our first win and we thought that there was a decent chance that we could win one or both games.”

S04 did pick up their first win, but they still have a way to go. The crowded middle of the pack means S04 are only three games out of a playoff spot, but they have to leap a lot of teams to get there. Playoffs might not be a realistic goal this year, but S04 think they are better than their record indicates. Their win over Fnatic might be the start of proving that to everyone else.

G2 Esports played with a new player for the first time since Hampus “promisq” Mikael Abrahamsson relieved an ailing Mihael “Mikyx” Mehle in 2019 Spring. Perkz sat out week four to take time off and regroup after a stressful beginning to the Summer Split, forcing Kristoffer “P1noy” Albao Lund Pedersen into the starting lineup. Though P1noy is a very experienced professional, G2 Esports will be happy to get through the week 1-1 without Perkz.

G2 kicked off the week with a surprisingly easy win over Misfits Gaming. Rasmus “Caps” Winther popped off on AP Kog’Maw, going 13/1/7 while dealing 38.6k damage to champions — three times more than anyone else in the game. P1noy also had a solid 5/1/5 debut for G2 on Ezreal. G2 Esports took the win 22 kills to 8 in 26 minutes.

G2 had less luck against Excel Esports. They drafted a very short ranged team with Sett, Trundle, Senna, and Wukong, relying on Caps’ Azir to dish out the damage. Caps didn’t have pixel perfect positioning in this one, getting caught out as G2’s primary source of damage too often. Marcin “Jankos” Jankowski’s Trundle also had Infernal Soul stolen by Patrik “Patrik” Jírů’s Aphelios, extinguishing G2’s final win condition.

Still, G2 know that they can flip the switch on in the playoffs, so a 5-4 start for them isn’t as worrying. With the LEC going on a week break, G2 Esports may have Perkz back for week five as well. G2 will play MAD Lions and Origen when the LEC resumes. 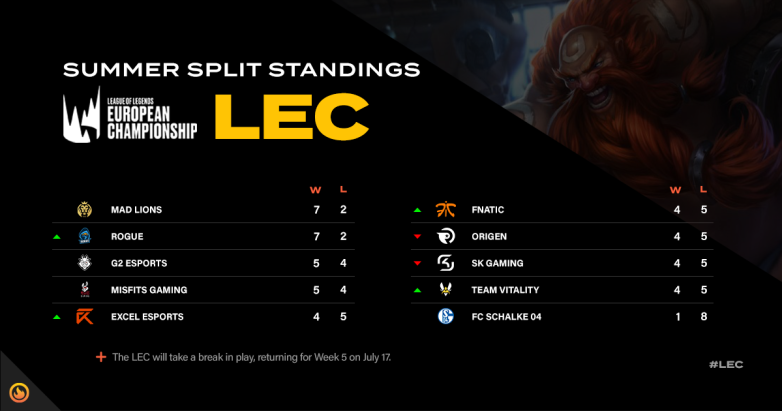 FC Schalke 04 still bring up the rear, but they now do so with a win to their name. Five teams are tied for fifth place at 4-5, including expected playoff teams Fnatic and Origen.

This has the makings of one of the next great LEC rivalries. MAD Lions upset G2 Esports in the Spring playoffs before falling to them in the semifinals in the rematch. G2 Esports got the best of MAD in the opening game of the Summer Split, but MAD are two games ahead of G2 in the standings. This will be even more fun if Perkz returns to play, but it will still feature great matchups like Marek “Humanoid” Brázda against Caps and Zhiqiang “Shad0w” Zhao against Jankos.

Both teams have started slower than they wanted to, but Misfits are coming off a big win over MAD Lions to close week four. Misfits have continued to stick by Mads “Doss” Schwartz after his slow start, but Doss looks to be getting better with more experience. Fnatic need Nemesis to snap out of his funk if they don’t want Fabian “FEBIVEN” Diepstraten to run away with the game. With Kasper “Kobbe” Kobberup in the fold, Oskar “Selfmade” Boderek won’t be able to focus on any one lane without repercussions.