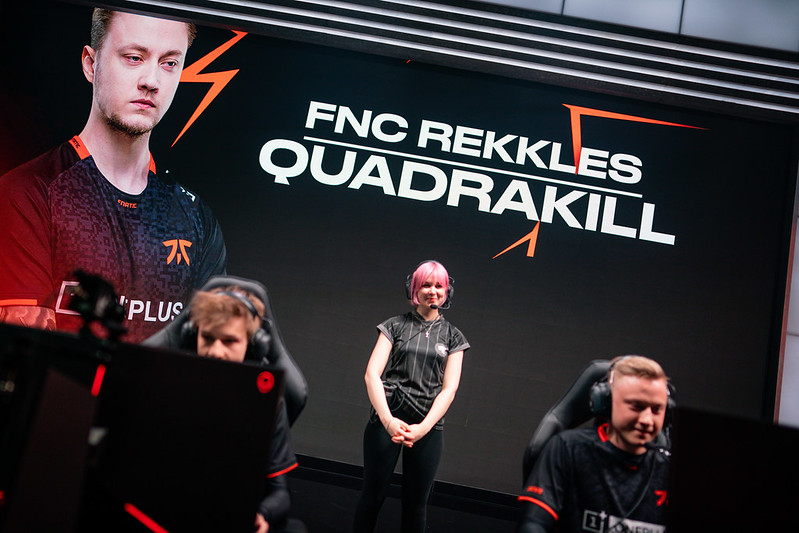 The LEC has concluded the fifth week of the 2020 Spring Split. Fnatic picked up quality wins over Rogue and Origen to create a four-way tie for first place. Meanwhile, G2 Esports have three losses in their last four games. We take a look at where things stand in the LEC by looking at the top story lines so far in Europe.

Fnatic opened the week with an interesting draft against Rogue. After seeing Rogue commit to Syndra and Kled as their solo laners, Fnatic called an audible and flexed their first pick Ornn mid in favor of Zac top lane. Gabriël “Bwipo” Rau is the first player to pick Zac top in the LEC since the 2016 Summer Split, but he might not be the last after his performance.

Finn “Finn” Wiestål’s unfamiliarity with the champion surely played a part in Fnatic’s First Blood. Finn got Bwipo down to a few hundred HP while still at full health and went for the solo kill. Bwipo used his Let’s Bounce! To buy time and restore health with his passive to force Finn to dismount. When Bwipo went into Cell Division, Tim “Nemesis” Lipovšek teleported on top of Bwipo to save him and use his Call of the Forge God to pick up the kill.

The addition of Zac to a composition that already had Rek’Sai, Ornn, and Rakan made it so easy for Fnatic to engage on their terms and lock down Rogue members without response. Emil “Larssen” Larsson’s Syndra felt the pain of dying from a CC-chain on more than one occasion. More specifically; dying from full health under his own mid turret at 16:40.

By being proactive on the map with their engage, Fnatic took an early kill lead and stretched it by forcing more fights. A Baron force at 27 minutes resulted in a Martin “Rekkles” Larsson quadrakill and an easy return for the buff for Fnatic. With the buff, Fnatic had no problem corralling minion waves and diving into Rogue with their tanky stats. A final pentakill for Rekkles at 32 minutes sealed the game and win for Fnatic.

Fnatic picked a more standard composition against Origen, but the results were the same. They allowed Barney “Alphari” Morris to pick Soraka, but Fnatic responded by picking Pantheon to pick on her vulnerability to ganks. They did just that, killing Alphari twice in the first ten minutes. Bwipo even picked up a solo kill on Erlend “Nukeduck” Våtevik Holm’s Ryze for good measure.

Once again, Fnatic’s ability to engage fights at will with Ornn, Taliyah, and Pantheon allowed them to dictate the mid game. Bwipo and Oskar “Selfmade” Boderek attacked Ryze in the side lane with their semi-global ultimates. Fnatic used their picks to secure the first four drakes of the game for Cloud Soul. A five-for-zero ace around Baron at 29 minutes secured the win for Fnatic and a tie for first place.

Even though they are still in a tie for first place after five weeks, there is no doubt that G2 Esports are performing below expectations. They fired off to a 6-0 start but have only gone 1-3 since. That includes another loss this week to MAD Lions. In contrast, G2 began both the 2019 Spring and Summer Splits at 9-1 and with commanding leads in the standings before they started to get comfortable and conceded games.

One of the problems for G2 this year has been their slower start to games. They were dominant in 2019 in gold differential at 15 minutes, leading by an average of 1k in Spring and a whopping 2.6k in Summer. Both first in the LEC. That number has fallen off in 2020. G2 are now only averaging a 677 gold lead, third in the league behind Rogue and Fnatic.

But that isn’t the only problem for G2. They were actually up over 3k gold against MAD at 15 minutes, but ended up on the back foot in skirmishes against MAD. Marek “Humanoid” Brázda’s Leblanc danced around G2, evading gank attempts and leading assassination attempts, specifically on Luka “Perkz” Perković’s Sylas. It’s not often you can say that G2 were outperformed mid lane, regardless of whether it was Perkz or Rasmus “Caps” Borregaard Winther, but Humanoid made it happen in a 7/2/6 performance.

Tough weeks but we will get back in shape😐

That brings up the issue of the player swap. In theory, swapping the more aggressive, lane dominant Perkz for Caps would give Fnatic even more lane dominance, but that hasn’t been the case. While Caps was able to offset losing lane matchups with his huge roaming numbers, Perkz has been victimized by being camped in lane and later when pushing side lanes. Similarly, Caps can’t get out of losing lane matchups bot lane because ADCs must stay and collect as much farm as possible to remain useful.

You can see that in the CS differential numbers. At 10 minutes, Perkz averaged CS leads of 3.3 and 5.3 in 2019 Spring and Summer, both good for second in the LEC. Meanwhile, Caps is averaging a 1.3 CS deficit at 10 minutes so far this season. It may not seem like much, but G2 did not have a single top, mid, or ADC player average a CS deficit at 10 minutes in either split in 2019. Perkz’ 1.8 average CS lead among mid laners also is less than Caps’ 2.8 and 3.9 in 2019, which is notable because of how much more often Caps roamed early.

It’s too early to say that G2 should swap Perkz and Caps back, but it has definitely made them weaker so far. Perkz needs time to re-acclimate himself to mid lane, while Caps has transitioned to a role he’s never played before and must build synergy with Mihael “Mikyx” Mehle. That said, it behooves G2 to decide as soon as possible whether they want to commit to it for the rest of the year or make the swap back. Every regular season game, scrim, and even solo queue game rep is important when the ultimate goal is a world championship.

Another crazy week in the LEC has resulted in a four-way tie for first place with Fnatic, G2 Esports, Misfits Gaming, and Origen all sitting at 7-3. Of the teams, only Fnatic and Origen have played each other twice. Fnatic’s win over Origen was huge, as it guaranteed a season split of a game apiece between the teams. It also makes sure Fnatic didn’t fall essentially three games behind Origen.

Misfits hold a strong advantage over G2 and Origen with early season wins, but they have already dropped their second loss of the season to Rogue. If the 6-4 Rogue are able to make up a game in the final four weeks of the season, they will hold the tiebreaker over Misfits. Rogue are set up well to end the season with games against FC Schalke 04 and SK Gaming in the final week of the season.

Behind the 7-3 teams, Rogue and MAD Lions are both 6-4, and Excel Esports are seventh at 5-5. With no teams running away with the league like G2 Esports had been in 2019, there are several contenders all bunched together. Only FC Schalke 04, SK Gaming, and Team Vitality seem to be out of the running for a playoff spot.

In the race for first, G2 have get-right matchups against SK and Vitality in week six. By contrast, each of Misfits, Fnatic, and Origen have one game against a current playoff team and one game against the league’s bottom three.

Misfits get a chance for revenge after getting crushed in their week one game against Fnatic. Rekkles popped off in a 10/0/3 Aphelios game, so there’s a good chance Misfits won’t allow him to get through again. Though it’s been years since he left, it’s always interesting to see Fabian “Febiven” Diepstraten against the team he once led. He’ll match up against the new Ornn one-trick Nemesis. Iván “Razork” Martín could build his rookie of the year portfolio with a good game against Selfmade.

Rogue have the early game to keep up with any team in the LEC, but they need to transition it better in the mid game. By contrast, Origen have been the best team in the league at converting a win after taking a lead. Rogue want Finn to be aggressive, and Origen just came off a defeat to Fnatic in which Alphari was repeatedly targeted early on. Expect Andrei “Xerxe” Dragomir to offer Alphari some early support as Origen look to compensate for their week five mistake.