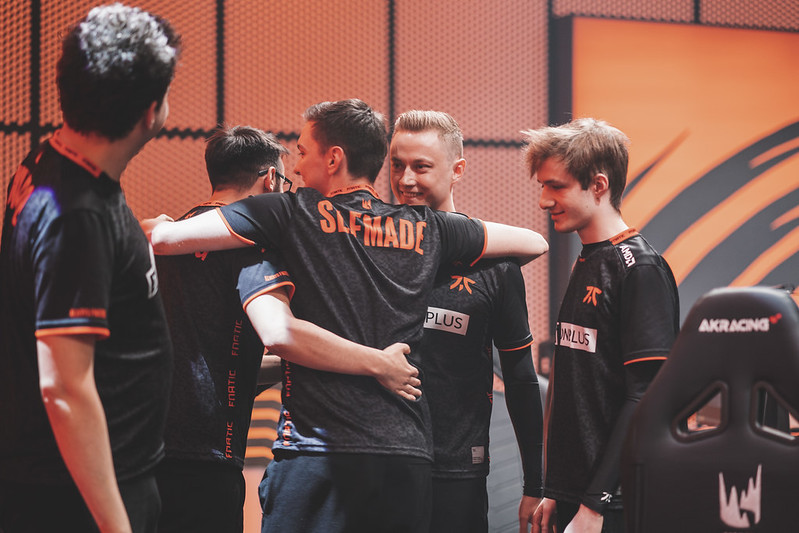 After a week’s delay, the LEC has concluded the eighth week of the 2020 Spring Split. This was the first week of the new online format to combat the ongoing coronavirus pandemic. G2 Esports, Fnatic, and Origen all felt right at home, going 2-0 to keep pace at the top of the league. Meanwhile, MAD Lions, Misfits Gaming and Rogue clinched their spots in the playoff field. We take a look at where things stand in the LEC by looking at the top story lines so far in Europe.

All three of the LEC top teams will remain so for another week. G2 Esports, Fnatic, and Origen all secured 2-0 weeks heading into week nine, the final of the regular season.

G2 kicked off the week with a win over Rogue. Their trademark aggression was on display early. Marcin “Jankos” Jankowski’s Pantheon picked up First Blood on Emil “Larssen” Larsson’s Ekko at 3:21 as part of a three-man roam. He then transitioned that into a kill on Finn “Finn” Wiestål’s Aatrox a minute later. Two lane ganks through bot resulted in two more kills for G2 as they went up four kills to zero by seven minutes.

Rogue fought back by sending Kacper “Inspired” Słoma bot for a pair of kills, but G2 had the proper response. Luka “Perkz” Perković used his Corki Package and Rasmus “Caps” Borregaard Winther used his Taliyah Weaver’s Wall to close the distance and turn the fight around in G2’s favor. They killed all three of Rogue’s players and started the dragon stacking that would eventually net them Ocean Soul. G2 would go on to win by a 22 to 11 kill score, closing it out in 36 minutes. Perkz finished a perfect 6/0/9 on Corki.

G2 made quicker work of Excel Esports. Jankos reprised his role on Pantheon and took over the game, beginning by playing his part in Perkz’ First Blood. Jankos went on to finish 12/0/9, giving him the highest kill participation on the team in their 28 kills to 12 win. His 12.5k damage was almost double Perkz’ 7.2k on Qiyana. They held Excel to a single turret take in their 22 minute win.

Don't try Sett support at home unless you were nurtured as a child by wild bears in the forests of Bulgaria. 🇧🇬@FNCHylissang is your @AMD MVP in our win against @Rogue. #FNCWIN #LEC pic.twitter.com/i1AEKPCurT

Fnatic also played Rogue and Excel this week and also went 2-0. The first victory was against Excel. Fnatic caught Tore “Tore” Hoel Eilertsen napping before minions spawned, picking up First Blood 44 seconds into the game. They never trailed in gold from there, even when they lost a big Rift Herald fight in the mid game. Fnatic regrouped, picked up a double kill in top lane, and continued the dragon stacking that would give them Cloud Soul at 25 minutes. They would go on to win 19 kills to 8 in 30 minutes.

Fnatic’s game against Rogue may well have been their cleanest of the year. It started in the draft phase, as Fnatic came away with Ornn, Sett, and Gragas as power picks. They punished Rogue’s bot lane mercilessly, if not by kills, but by denying Steven “Hans sama” Liv the ability to get gold. Martin “Rekkles” Larsson’s Ezreal finished a full two items ahead of Hans sama’s Xayah as Fnatic put on a clinic of methodical map play to beat Rogue. Gabriël “Bwipo” Rau earned game MVP with a 2/0/7 Ornn performance.

🇬🇧 @xPeke, after the game vs. @SKGaming: "I am SUPER happy about this weekend. #LEC is back! Hope to see you again next week! #OGWIN!" pic.twitter.com/MqIcyGlXcv

Origen had the easiest schedule of the trio this week, picking up wins over Team Vitality and SK Gaming. In their opener against Vitality, Origen actually trailed in gold for the majority of the game. But that’s not unusual for such a slow-paced team, and Origen turned it around with a couple of fight wins around an Ocean Drake. The scaling of Ornn and Aphelios came through, and Origen picked up the final nine kills of the game to come out victorious. Elias “Upset” Lipp finished 6/0/4 in the win.

Their win over SK Gaming was one of their fastest of the season. New SK top laner Simon “Ventair” Tschammer was the only player to pose any problems, playing a good Camille top into Barney “Alphari” Morris’s Renekton. The rest was all OG. Andrei “Xerxe” Dragomir was not punished for going Karthus jungle, using his ultimate to stack his Mejai’s Soulstealer en route to a 4/0/6 score line. Upset and Mitchell “Destiny” Shaw both went deathless as well, and OG needed “only” 29 minutes to close out SK.

G2 Esports are in the driver’s seat for the top playoff seed entering the final week of the regular season. They have a one game lead and hold the LEC tiebreaker over both Fnatic and Origen, meaning they need only to beat either FC Schalke 04 or Misfits Gaming to clinch first. Fnatic and Origen will need to play an additional tiebreaker game if they have matching records after week nine.

While the top three LEC teams all clinched their playoff spots last week, the rest of the playoff field was set this week. MAD Lions, Misfits Gaming, and Rogue have all secured their playoff spots. However, week nine will still be important for determining seeding, especially with a top four spot still up for grabs.

Thanks to @G2esports' win today, our spot in the #LEC Spring Playoffs is locked!

MAD Lions were the biggest winner of the week. They leapfrogged Misfits and Rogue to jump into fourth place after wins over SK Gaming and Misfits. In their first win over SK Gaming, MAD were in control all the way. They had already secured two drakes, Rift Herald, and first turret before Zhiqiang “Shad0w” Zhao finally picked up First Blood at 14 minutes. MAD never conceded a kill without earning one themselves, rolling to a 13 kills to 4 win in 36 minutes.

But their second match against Misfits really set them up in a good spot heading into week nine. After an even early to mid game, MAD found the fight they needed at 21 minutes. Fabian “Febiven” Diepstraten went deep into MAD’s jungle to try to finish a kill on Shad0w, but the jungler escaped with his life and the rest of his team collapsed on Misfits. MAD picked up three kills, Baron, and turned the game in their favor. After two more big team fight wins, MAD took the game 19 kills to 8 in 34 minutes.

While Rogue and Misfits will be happy about clinching their playoff spots, they won’t be happy about their week eight performances. Rogue lost to Fnatic and G2 Esports, which isn’t surprising or particularly problematic, but that now moves them to 0-6 against the top three teams on the season. Rogue are 9-1 against the rest of the league. That’s a fine recipe to make it into the playoffs, but they’ll need to find a second gear in order to make any noise when they get there.

On the flip side, Misfits should definitely be disappointed with their pair of losses. Losing to MAD Lions isn’t concerning, but it allowed MAD to jump them in the standings in the fight for the important fourth seed. Had Misfits won it, they would have taken a virtual two game lead over MAD, given MSF won their first meeting in week five.

The loss to FC Schalke 04, though, may haunt them. Maybe it had something to do with playing from home for the first time, but Misfits didn’t look themselves. They stuck their best performing player, Febiven, on Ornn. He promptly got destroyed by Felix “Abbedagge” Braun’s Azir, ending the game down 150 CS and 8k in gold. Off games can happen, but this was a pretty bad time for MSF to look lost.

The good news for Misfits is their remaining LEC schedule could line up favorably. They open week nine against Team Vitality before closing their regular season against G2 Esports. That normally wouldn’t be great, but G2 need only one win to clinch the first overall seed, and they play Schalke to start the week. Assuming G2 wins, they’ll have nothing to play for against Misfits. They may not opt to use any subs, but they’ve shown a willingness in the past to play for fun in such scenarios.

Both teams will still be playing for seeding in this one. Fnatic are guaranteed a top four finish, but they can play their way into selecting their opponent in Round 2 of the playoffs. MAD Lions can clinch top four if they win out. Bot lane will be the matchup to watch. Matyáš “Carzzy” Orság should be Rookie of the Split, and he gets another duel against the LEC’s all-time best ADC. Marek “Humanoid” Brázda has also been rounding back into form recently, making his matchup with Tim “Nemesis” Lipovšek intriguing.

Another game of MAD Lions against one of the two teams chasing G2 Esports for the top seed. It’s possible that G2 will have already clinched by Saturday, but Origen will still be fighting Fnatic for the second seed at minimum. These are two of the slowest teams in the LEC by average game time, so don’t expect fireworks early. Both will want to funnel farm into their mid and AD carries and play for a powerful late game team fight. Xerxe will be tasked with shutting down any aggression from Shad0w.