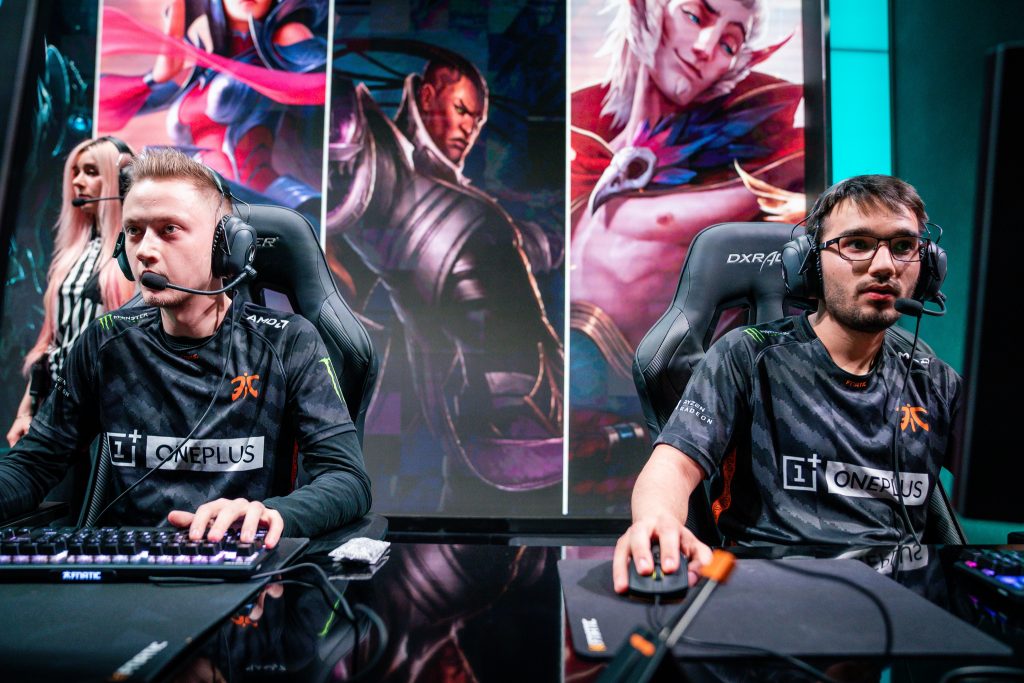 Fnatic locked up the second seed entering the LEC Spring Playoffs in the final week of the regular season. (Photo courtesy of Riot Games)

The final week of the 2019 LEC Spring Split is in the books. Origen secured the 2nd seed ahead of Fnatic, SK Gaming won the tiebreaker for the final playoff spot over FC Schalke 04, and Misfits Gaming ended up on the outside looking in. We take a look back at the match results, top storylines, best plays, and standout individual performances from the past week in Europe.

Fnatic lost their star mid laner to G2 Esports in the offseason. They also got demolished in the first matchup, losing in the fastest game in LEC history (at the time). You think they wanted this one?

Broxah and Bwipo clearly had a plan going into this game. Seeing that Jankos would start his red, they late invaded to bully him off the buff to springboard Broxah’s Karthus off to an early three buff lead.

That play had huge ramifications in the early game. With the lead, Broxah was able to make sure he could power clear without fear of a Jankos invade. Broxah also took part in a four-man dive bot at 6:30 to secure the first two kills of the game for Fnatic. On the flip side, Jarvan IV is a champion that needs to gank early to be successful. By losing early tempo and getting behind in levels, Jankos could not impact the map early to help out his laners.

Fnatic were absolutely stomping the jungle, mid, and bot lane in this one. They had jumped out to an 8k gold lead by 22 minutes, looking to return the favor of an embarrassingly quick win on G2.

Notice that we didn’t mention top lane. Bwipo picked Gangplank into Wunder’s Ryze, but we hesitate to call it a counter pick because their was no countering going on at all. Wunder absolutely smashed the matchup so hard that he single-handedly kept G2 in the game. The phrase “1v9” is overused, but it fits here for the first half of the game.

G2 were able to hold up in their base fight-after-fight, including two times that Wunder was able to dodge Broxah’s Karthus ult by timing it with his Ryze ult. Despite the huge gold deficit, G2 could defend because Fnatic didn’t really have a great siege composition or any front line to force a dive.

Down three inhibitors at 35 minutes, G2 managed to rush down Baron before Fnatic could react, allowing them to continue stalling out the game. Through their base defense, it was becoming very apparent that G2 would win every 5v5 fight at this point in the game. The scaling of Ryze and Cassiopeia had been realized, while Fnatic’s Irelia and Lucian were falling off.

Fnatic tried to take Elder Drake just after 42 minutes, but G2 responded. Wunder used his Ryze ult to give Promisq’s Alistar the perfect flank. With his E-Q combo layered with Janko’s Jarvan IV, G2 wiped out three Fnatic carries instantly. Hylissang kept his head in the game, though, and snuck into G2’s base to kill the bot lane inhibitor with the help of Baron empowered minions.

That play proved pivotal minutes later. Fnatic rushed down Baron at 47:30, needing to keep it away from G2 or face certain loss. Fnatic finished it, but G2 had their own plans. Wunder and Perkz ran straight down mid lane while the rest of G2 tried to stop their backs to give the duo time to end the game.

Instead of panicking, Fnatic had their own solution. They would just run to G2’s base:

Just five seconds before that bot lane inhibitor Hylissang killed would respawn, he and Rekkles ended the game. If they had taken five seconds longer, G2 would have finished Fnatic’s Nexus while Caps and Jankos stalled out Rekkles and Hylissang. Games like this illustrate how League of Legends really is a game of inches (or seconds).

Coupled with their win over Splyce on Sunday, Fnatic clinched the 3rd seed in the LEC playoffs. From 0-4 to 3-7 to 11-7, Fnatic are easily the hottest team heading into the playoffs. They chose Team Vitality as their Round 1 opponent, staying away from the SK Gaming team that beat them twice in the regular season.

G2 had already locked up the 1st seed and were playing Promisq while Mikyx got some needed rest for his wrist. They should be back to full strength when they take on 2nd seeded Origen in the playoffs.

LEC fans have spent the whole Spring Split proclaiming that SK Gaming 3-0’ed Fnatic on the season, given the re-made game that was all but over in SK’s favor. That is no longer their most important 3-0 on the season as they won all three games in the final week to break into the playoffs.

A harder than expected fight in their first game against Rogue left some doubts as to whether SK Gaming would be a worthy playoff team. Rogue have improved as the season has gone along, but were playing for nothing and gave SK Gaming a fight for 40 minutes.

But SK regrouped and obliterated Team Vitality in their 2nd game of the week. Their win in just over 20 minutes broke G2’s record for the fastest win in LEC history. SK took that game 13-kills-to-1, conceding only Rift Herald and a single turret.

All that was left was to defeat a limping FC Schalke 04, and that they did. Crownshot had another great performance, finishing 5/1/3 on Tristana. Pirean’s Zoe dealt the most damage in the game at 12.2k while finishing a deathless 1/0/6.

The 26-minute win sent FC Schalke 04 packing. After such a promising start to the season, they finished with eight losses in their final 10 games to finish 7th on the season.

Origen left no drama in their final week of play. They won handily over FC Schalke 04 and Excel Esports to secure the 2nd seed and a matchup with G2 Esports in the playoffs.

With the new LEC playoff format, the 2nd seed is a huge deal for Origen. The winner of their matchup with G2 Esports will advance to the finals, while the loser will play in Round 3 against the final team left standing of the 3-6 seeds.

The most hyped up LEC team in the offseason won’t be attending the playoffs. Misfits Gaming had their chance to force their way into the tiebreaker, but could not get past Splyce.

The early games remain no problem for the team, but they just fall apart in the mid game. Misfits had as large as a 4.5k gold lead at 25 minutes, but Splyce were the better side from that point on. The coaching change mid-season seemed to revitalize the team for a week, but their issues persisted throughout the season.

A win over G2 in their final game was meaningless for the standings but may be something positive for them to take into the Summer Split. They need anything they can get after their 5-10 record in their final 15 games doomed them to 8th place.

Player of the Week: Selfmade

The best player on SK Gaming showed up when it counted. Selfmade was the better jungler in SK Gaming’s three wins to propel them into the final playoff spot.

On Skarner, Rek’Sai, and Lee Sin, Selfmade finished a combined 9/7/24 in the final week of the LEC regular season. He had his best game in the upset against Team Vitality to force the tiebreaker, finishing 5/0/6 on Rek’Sai and snowballing the game out of control for SK Gaming.

Despite being on a middle-of-the-pack team, it’s clear that Selfmade is one of the best junglers in Europe. His stats bear that out as well. He is top five among LEC junglers in KDA, CS per minute, and gold per minute, even as those are somewhat team reliant.

Ranking 1st in kill participation (74.5%), kill share (23.6%), and gold share (18.5%) among junglers shows how reliant SK Gaming are on Selfmade to carry for their team. He will have a good first test in the playoffs against Xerxe and Splyce in the opening round.