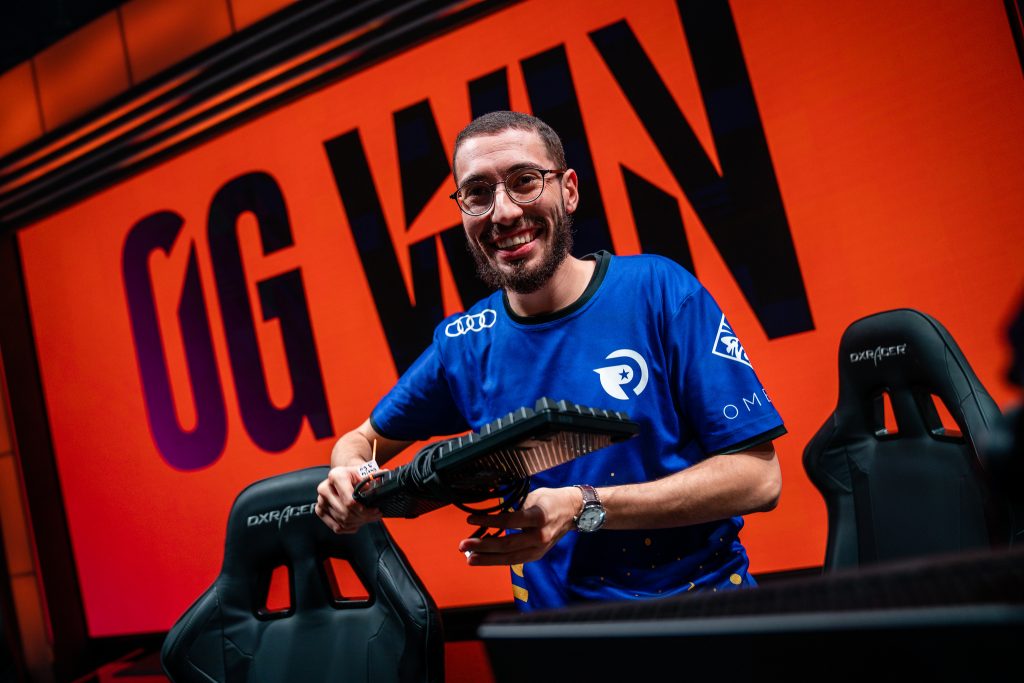 Origen and Splyce join G2 Esports and Team Vitality in the LEC playoffs after their performances in Week 8 of the Spring Split. (Photo courtesy of Riot Games)

Week 8 of the 2019 LEC Spring Split is in the books. G2 Esports clinched Europe’s first seed, while Excel Esports and Rogue are the only two teams eliminated from playoff contention. We take a look back at the match results, top storylines, best plays, and standout individual performances from the past week in Europe.

For much of the 2019 Spring Split, the fight for 2nd place in the LEC was between FC Schalke 04 and Team Vitality. However, Origen and Splyce have made hard charges down the stretch to secure their playoff spots, all while evening up with Vitality as FC Schalke 04 fell down the standings.

Origen’s most important match this week was their first. SK Gaming came into the week at 7-7 and, even with their two losses this week, are still in playoff contention.

Kold and Origen had no trouble with SK Gaming at all. Nukeduck’s Leblanc held Pirean’s Jayce in check, finishing 2/0/5 to Pirean’s 1/2/1. Selfmade has been the biggest playmaker for SK Gaming all season, but Kold outpaced him in this one. Kold’s Rek’Sai finished 5/1/3 for eight out of nine kill participation in the match, while Selfmade finished a meager 1/2/1.

It was not an especially bloody game, but Origen controlled it all the way. SK Gaming were only able to manage two objectives for the game, both being turret kills. Werlyb played the entire game in isolation, finishing 0/1/0 in the 30:30 defeat.

Origen had even less trouble in their matchup with Rogue. They needed less than 30 minutes this time, finishing with a 15-kills-to-5 lead, and sacrificed only one turret in this game. Kold had another stellar performance on Rek’Sai, finishing 6/0/5.

Splyce had a bit more difficult of a schedule this week than Origen to clinch their spot. In addition to facing SK Gaming, Splyce had to go through G2 Esports.

G2’s composition might have been favored in a long game, given that they had Irelia, Karthus, and Kai’Sa all scaling up. Spyce had more fall-off among their team in Renekton and Jarvan IV, but they had Sivir insurance. Kobbe proved that a full build Sivir is enough for any team to scale into the late game.

Splyce were in control throughout the mid-late game, though their gold lead didn’t tell the full story. They ended the game up 12k on G2 Esports, but all of the carries had similar items when the game ended. The difference in this one was Kobbe’s Sivir, finishing 12/1/11 and dealing 45.2k damage to G2 Esports, almost double anyone else in the game.

A key part to the Splyce win was also holding Jankos’ Karthus down. He scales incredibly well and eventually hit his power spike of double penetration items and Deathcap, but Jankos never got ahead and Splyce were able to itemize some resistance against him before Jankos got too strong. Jankos ended the game 1/6/5, one of his weakest performances of the year.

As is their nature, Splyce had another longer win in their game against SK Gaming. Xerxe controlled the game with a 4/0/12 performance on Aatrox, Humanod’s Zoe pumped out 28.2k damage to SK, and Kobbe cleaned them up with eight kills on Vayne.

Origen and Splyce will be in a fight with Team Vitality and Fnatic for 2nd place heading into the playoffs. Origen close the season against FC Schalke 04 and Excel Esports, while Splyce will face Misfits Gaming and Fnatic.

Remember, the 2nd seed in the LEC is especially important this split, as that team will receive a bye to Round 3 of the playoffs.

With a loss in their first game of the week to Splyce, G2 Esports were suddenly no lock to finish 1st in the LEC Spring Split. A loss to Team Vitality would have brought Vitality within one game of G2 on the season. Fortunately for G2, they took care of business in this one.

It didn’t start off great, though, for the best the LEC has to offer. Cabochard’s Jarvan IV solo killed Wunder’s Camille to kick off the game. Minutes later, Jiizuke turned around a Jankos top gank to give Vitality another 2 kills to none.

A fourth kill for Vitality was picked up 20 seconds later as Mowgli made his first gank appearance of the game. Jankos tried another top gank and was countered again, putting G2 in a 2k hole only eight minutes into the game.

Things started to turn around at nine minutes as Vitality overextended themselves. Plays were made both top and bot lanes, and though the kills came out to three apiece for the teams, that was a big win for a G2 squad that was down in levels and 2k gold this early in the game. They also picked up shutdowns on their kills, even if they ended up losing some minions to the turrets.

Vitality were still able to balloon their lead, peaking at 5.4k ahead 17 minutes in. But through superior skirmishing, G2 Esports were able to make plays in the mid-game to pull the game back. Caps’ Ryze was huge, picking up a double kill on Rek’Sai and Lissandra just before 20 minutes.

Vitality started Baron just before 24 minutes, but G2 forced them off and won the fight. G2 picked up three kills and took Baron afterward, evening the game up on gold. Utilizing Baron buff, G2 pushed down four turrets and took a 3.8k gold lead at 28 minutes.

Team Vitality were still making it a tough game, though, and forced Baron again at 31 minutes. This time, they picked it up before G2 could contest as a full team and were able to pick off G2 one-by-one, ending up with three kills. Surely this would swing the game back to Vitality, right?

G2 faced a 2v5 base defense against a team with Baron, but they pulled it off. Mikyx’s Galio hit a big taunt and Vitality didn’t feel comfortable pushing any farther with G2 spawning soon.

Vitality secured the next Baron at 38 minutes, but at a big cost. Caps and Wunder were busy tearing apart Vitality’s base, and Attila and Jactroll were dropped by the three-man squad of G2 during the Baron fight. Caps expertly used his Ryze ult to bring his whole team and minions over to Vitality’s Nexus turrets, allowing them to force Vitality into a now-or-never defense.

G2, unlike Vitality minutes earlier, were able to win a big fight under the double Nexus turrets to finally secure the game. There were wild back-and-forth swings throughout, but G2 Esports were victorious in 40 minutes, earning the 1st seed for the LEC Spring Split playoffs.

Player of the Week: Kold

Origen have hold some hot and cold streaks throughout the season, but Kold has been as consistent of a performer as the team has had. He had another pair of stellar performances in their playoffs clinching wins this week, finishing 5/1/3 against SK Gaming and 6/0/5 against Rogue. Both games came on an emerging power pick in Rek’Sai.

The 8/9 and 11/15 kill participation in his games this week was good for 79%. That number would be tops among LEC junglers for season average, and brings up Kold’s kill participation up to 64.5% on the season. It’s a welcome sight for Origen fans, as he is 2nd last among LEC junglers in that regard. But that is also something that comes with having good laners, as Jankos’ 63.9% can attest to.

Kold thrives in controlling the pacing of the game, as his other numbers point toward. He is top five among LEC junglers in KDA, CS per minute, gold per minute, kill share, and gold share. While he isn’t a carry oriented jungler often, he showed this week that he can do some heavy lifting when put on a jungler with more damage. He’ll need to keep that momentum up this week to help Origen try to secure 2nd place and a round 3 bye in the LEC playoffs.