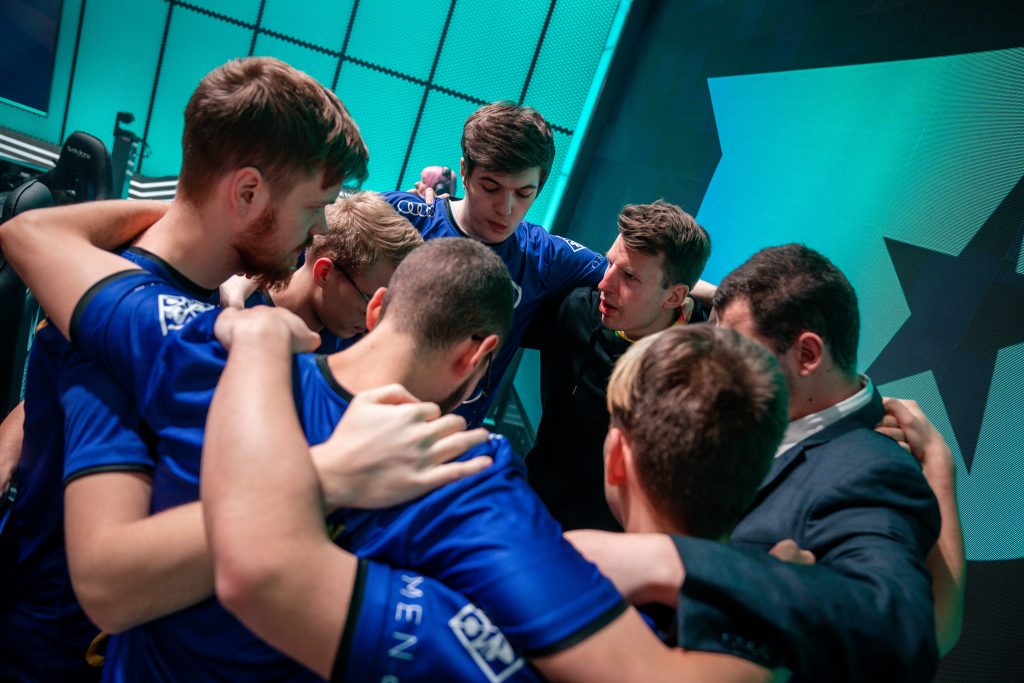 Origen entered the week in the middle of the pack, a big outing has them surging. (Photo courtesy of Riot Games)

Week 7 of the 2019 LEC Spring Split is in the books. G2 Esports continue to hold a three-game lead for first place, while Excel Esports moved past Rogue for ninth. We take a look back at the match results, top storylines, best plays, and standout individual performances from the past week in Europe.

Origen were squarely average heading into week 7 of the LEC. Sitting at 6-6, they had beaten up on some bottom of the table teams, but — aside from the G2 Esports upset — had poor results against the top teams. That included their week 7 opponents Splyce and Team Vitality.

This week Origen flipped that script, evening up their season series records with the two contenders.

Origen’s game against Splyce wasn’t explosive early, but Origen dictated the game on their own terms throughout. Kold controlled the early elemental drakes, grabbing two oceans and infernal without contest.

The gold was still even at 30 minutes, but Splyce hadn’t made a proactive play the entire game. Origen found a pick onto Norskeren’s Tahm Kench and then turned their attention on Baron. OG picked that Baron up — again without contest — while also taking kills on Vizicsacsi and Humanoid.

From there, Origen just walked into Splyce’s base with Baron buff and took ran right through them. The final scoreboard showed an 11 kills-to-2 win in just over 33 minutes.

For their second match of the week, Origen faced Team Vitality, the LEC’s second place team. Vitality were without Jiizuke due to illness, but were still powerful enough to beat Misfits Gaming with Saken in their opener.

Nothing much happened in the first 15 or so minutes of the game. Origen and Vitality traded a mountain drake for Rift Herald, but CS remained even and no kills were on the board. But that meant Patrik’s Draven was continuously stacking up his passive, waiting to cash out.

Cash out he did at 17:30. Kold came bot lane and Jactroll’s Tahm Kench was caught out. Attila had already completed his recall, so Jactroll had no support. He tried to pop his E Thick Skin and flash the wall, but Patrik’s ultimate secured the kill. In addition to the First Blood money, Patrik earned over 1k worth of gold for his passive stacks.

With that huge influx of gold, you would assume the bounty on Patrik’s head would balloon. Hilariously, it instead lowered itself from 500g to 450g immediately after. Rest assured that even in pro play, nobody can figure out how the bounty system works.

The first big teamfight came at 30 minutes. Vitality had pushed OG back around Baron pit, but in the process had grouped up very tightly. Alphari’s Vladimir took that opportunity to teleport in behind Vitality and hit a huge R Hemoplague on four members. OG were able to pick up kills onto Cabochard and Saken and turn to Baron.

With double mountain drakes, Origen melted Baron without contest. Then using that buff, they were able to take the infernal on spawn and really continue the snowball.

Vitality tried to make a play onto the 4 man group of OG at 33:30. Jactroll ulted in to get it started, dying almost instantly, but VIT were able to pick up a kill on Alphari. The 5v4 fight ended up in a 2-for-2 exchange, all the while Kold’s Rek’Sai took bot inhibitor.

As Kold moved over, OG held the numbers advantage once again. They used that and their double mountain drakes to shred through VIT’s remaining turrets. The final tally for OG was a 6-3 kills win in 34:30.

The wins over Team Vitality and Splyce were crucial for the playoff seeding hopes. Not only did it move them up to 8-6 on the season, good for a tie for 3rd place, the wins made sure that neither Vitality nor Splyce will have the season series tiebreaker over Origen.

G2 Esports are easily the top team in Europe, and arguably one of the top contenders in the world. SK Gaming are a middling to bottom tier team in the LEC, though they did pick up two wins against the now resurgent Fnatic.

So this game was supposed to be fairly one-sided, and it absolutely was for 24 minutes. G2 led 16 kills to 9, picked up all three elemental drakes, and had just taken the first Baron of the game. Following the script of all their other games, this was the time for them to put it into full throttle and end the game in the next few minutes.

Instead, they got much more than they bargained for from SK Gaming. G2 took their first inhibitor just after 24 minutes, but in the process, they lost three members and gave a double kill over to Crownshot’s Jinx.

It looked like it still wouldn’t matter, as G2 Esports immediately assassinated Crownshot in the next fight mid. However, Perkz and his 1k gold bounty also immediately died, and SK Gaming were eventually able to pick up the team fight win on an over chase by G2.

G2 were still up 7k or so gold, but SK Gaming were able to pick up their first infernal drake afterward. That swing from G2 potentially having two infernals to one apiece meant SK Gaming actually had a chance to scale up and make this one interesting.

Just a quick rotation later, SK picked up their first Baron of the game. Caps and Mikyx tried to 2v5 and predictably failed, giving SK 2 more kills for their troubles.

SK Gaming took Baron buff and started their siege bot lane. Werlyb matched Caps top lane, but with Caps having no teleport, Werlyb made the move to teleport down to his team and force the action. SK picked up 2 kills on the 4 man squad of G2 and finished the Nexus before Caps could even get both Nexus turrets down.

While an incredible performance by SK Gaming to pull this one back, we also can’t ignore that it took a comedy of errors from G2 to allow them the opportunity. Surely nobody wants to lose a game pro play, especially a game they were leading by 8k at 24 minutes, but maybe this one didn’t hurt so bad for G2. Check out Perkz’ tweet after the weekend:

SK Gaming already has a 2-0 season win over Fnatic, so they will beat them out in any tiebreaker scenario. With that win over G2, they move to 7-7 and match Fnatic’s record on the season. Maybe G2 don’t mind seeing their good pals Fnatic sweat a little to make the playoffs this Spring Split?

There’s no way G2 would intentionally lose the game, but it seems pretty obvious that they aren’t losing much sleep over it.

Player of the Week: Nemesis

Fnatic finished 2-0 for another week, running their win streak to four straight, along with them moving to .500 for the first time on the season. Nemesis was a huge part of that this week, as he and the LEC showed that they can actually play Sylas after a rough start. Nemesis picked up both his wins on the champion, finishing 1/2/4 against FC Schalke 04 and 4/0/5 against Rogue.

Nemesis was much maligned during Fnatic’s rough start. Fans knew he wouldn’t be Caps right away, but Fnatic continually drafted him into losing matchups and he seemed content to concede CS as Fnatic would slowly lose the game.

He’s shown a more aggressive side of late, not coincidentally as the team as a whole is playing better. Critics could say that his 5.50 KDA, best in the LEC among mid laners, is a product of his safe play. But that wouldn’t hold up when you consider that he also has the highest kill participation among LEC mid laners at 66.4%. Those are amazing numbers for a rookie in a league with names like Caps, Nukeduck, Febiven, and Jiizuke.

Hopefully, he and Fnatic keep growing together so we can see what a more seasoned Nemesis and Fnatic squad are capable of accomplishing. They’re on the right track.