LEC Week 6 Recap: Fnatic are Back 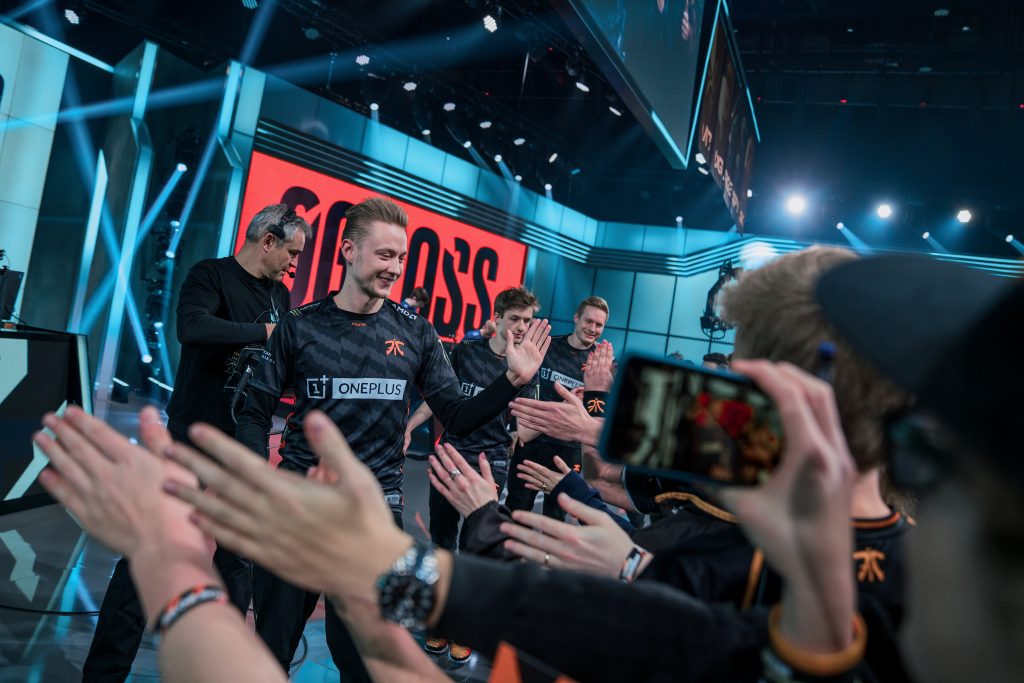 After a season of ups and downs, it seems like Fnatic has finally put it together (Photo courtesy of Riot Games)

Week 6 of the 2019 LEC Spring Split is in the books. G2 Esports have a three-game lead for first place, while Rogue and Excel Esports are tied for last. We take a look back at the match results, top storylines, best plays, and standout individual performances from the past week in Europe.

Fnatic showed us they are still capable of beating some of the top LEC teams in Week 5’s win over Splyce, but they have also shown their inconsistency in a loss against SK Gaming the next day. Week 6 may be looked back upon as the point in the season Fnatic put it all together.

Their first game was against Origen, who were coming off an upset of G2 Esports and were on a 5 game win streak.

Broxah kept that pressure up bot lane and visited for a level 2 turret dive. Broxah picked up a kill on Mithy and blew 2 more Origen summoners, though Hylissang greedily held his flash and died for it.

Origen tried their own first play of the game at 5 minutes. Kold ganked mid lane, trying to take advantage of Zoe’s low mobility early. Unfortunately for them, Hylissang had already rotated and was there to hit a flash taunt on Kold. Rekkles teleported in, Broxah collapsed from top river, and Fnatic turned the gank around to a 2-for-0 in their favor.

Building upon that early lead, Fnatic constantly used their semi-global ultimates from Sion, Nocturne, and Galio to make plays across the map. Origen’s bot lane was specifically targeted, as was evidenced by their 12 deaths in the 28-minute game.

The only 3 kills Origen picked up in the game were onto Mithy’s Tahm Kench. These were a result of Fnatic dives that still gave them an advantage, and Hylissang was the sacrificial lamb each time. The 23 kills to 3 win was reminiscent of the 2018 Fnatic squad.

Although Origen were hot, Team Vitality were the clear-cut 2nd place team headed into their matchup with Fnatic. That played out in the game, as Vitality gave Fnatic all they could handle.

Vitality targeted Nemesis’s Zoe early — like Origen — but were successful. Jiizuke traded a kill on Nemesis for Nocturne’s first ultimate and Mowgli returned minutes later to collect her kill on the flash-less Zoe.

On the other side, Fnatic were crushing their bot lane 2v2 matchup. Rekkles’ Lucian was up 40 CS on Attila’s Ashe at 12:30 when Vitality swapped out of the matchup, sending Attila and Jactroll top to dive Bwipo’s Yorick.

If you only looked at the kills at 22 minutes, you would see Vitality up 7-5, but that didn’t tell the whole story. Yes Cabochard was up 60 CS on Bwipo top lane after a big 4 man dive, but Fnatic were crushing the other 3 roles. Broxah was up 46 CS in jungle, Nemesis 60 CS in mid, and Rekkles 51 CS in bot. That gave Fnatic a 2k gold lead despite being down in kills and only up 1 turret in the game.

After some trades of fights back-and-forth, the two teams were in a battle for Elder Drake at 38:30. Fnatic tried to rush it down with their double mountain drakes, but a well-timed Q Tongue Lash from Jactroll’s Tahm Kench stole Elder for Vitality. Though they had no elemental drakes of their own, it was an important denial for Vitality.

Vitality then tried to go for the backdoor play. Jactroll brought Attila along with him in his R Abyssal Voyage and they were able to take mid inhibitor. That was all they would get, though, and Jiizuke and Cabochard died to stop the Fnatic recalls.

With that opening, Fnatic rushed to Baron with their double mountain drakes. Mowgli flashed the wall to try for the steal, but Broxah’s smite was true this time and Fnatic secure Baron. Fnatic picked up kills on Mowgli and Cabochard and pushed forward to try to end the game. They did just that, as Rekkles picked up a double kill and Fnatic showcased the calm under pressure they exhibited all during 2018.

We noted in last week’s LEC recap that Misfits Gaming might be looking to bring in a new voice for their squad, and they did just that in advance of Week 6. Hussain “Moose” Moosvi returned as Head Coach this week, and Misfits returned to their winning ways from early in the season.

Misfits came out fast against SK Gaming, picking up the first three kills of the game. Given their scaling advantage in team composition, they were content to play it out for the long haul. Misfits picked up three Barons in the game, including the first right after it spawned at 20 minutes. SK Gaming did pick up the last Baron, though it was simultaneous to their Nexus falling to three members of Misfits.

Origen drafted Karthus jungle, so Misfits took a page from G2’s playbook and countered with Ivern in the jungle. They also grabbed Febiven Orianna, giving them four total shields when you count the self-shields from Urgot and Kai’Sa.

A rough week for Origen’s bot lane continued, as Misfits also crushed them in the 2v2. Hans Sama’s Kai’Sa picked up First Blood at 8 minutes on Mithy’s Braum, set up by a nice combo from GorillA’s Alistar.

A pick onto Nukeduck’s Zoe gave Misfits a numbers advantage at 26 minutes. They used that to take Baron, though they also sacrificed their bot inhibitor in the trade.

After more back-and-forth trading, the game was in an interesting state at 39 minutes. Misfits had crashed into Origen’s base, taking down 2 inhibitors and a Nexus turret. Meanwhile, Origen were able to take the Elder Drake in advance of the next Baron spawn.

Misfits were able to take Baron and wait out the Elder Drake. With that power and an exposed Nexus, Origen were forced to take a fight in their base. Misfits won the fight easily, utilizing their shields to keep Hans Sama alive and rendering Origen’s Zoe and Karthus burst useless.

The 2-0 week moved Misfits Gaming back into a tie for 5th place at 6-6. The win over Origen was also very important for tiebreakers, as Misfits hold the 2-0 edge over Origen for the Spring Split.

Player of the Week: Rekkles

It’s been a rough 2019 for Fnatic, but Rekkles and the squad looked to turn a corner in Week 6. Rekkles, in particular, was dominant this week, as he and Hylissang crushed their lane against Origen and Team Vitality. Rekkles finished 10/0/6 on Kai’Sa against Origen and 3/2/5 on Lucian against Vitality. Don’t let that score against Vitality fool you, though. Rekkles dominated the laning phase via CS and kept Fnatic afloat while the top half of their map struggled.

Speaking of laning phase, Rekkles has continued to crush his LEC competition in that regard. His CS per minute of 10.54 is still tops among European AD Carries. He is also tops among ADCs in terms of gold share (25.9%) and kill share (34.6%). His kill share is 3.3% higher than Upset’s 2nd place number of 31.3%. This indicates that Rekkles and Hylissang, while given a lot of resources, are also doing work on their own in the 2v2.

Buffs to AD Carries have certainly helped, but Fnatic may have found their groove by playing through Rekkles in Week 6. We all know that they played around Caps in 2018, and deservedly so, but Rekkles proved again that Fnatic can be a dominant team by playing around him as well