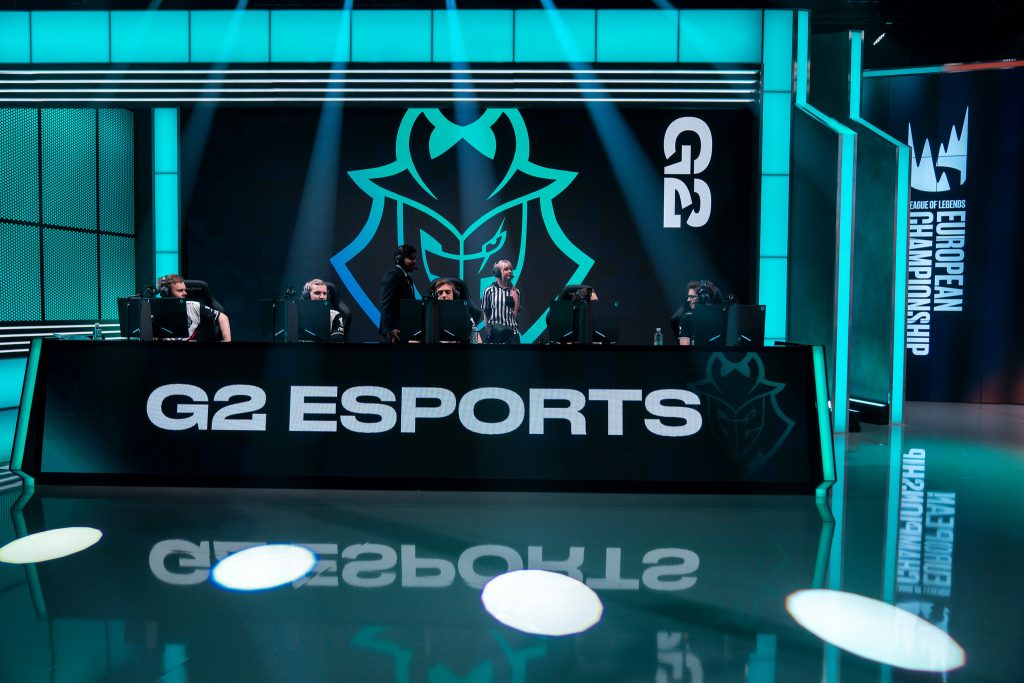 Week 4 of the 2019 LEC Spring Split is in the books, with G2 Esports still in sole possession of first place thanks to a dominant performance. (Photo courtesy of Riot Games)

Week 4 of the 2019 LEC Spring Split is in the books, with G2 Esports still in sole possession of first place and Rogue the last team searching for a win. We take a look back at the match results, top storylines, best plays, and standout individual performances from the past week in Europe.

Fnatic had this one circled when the schedule was released. G2 Esports, their top rival, took their star mid laner in the offseason. Fnatic spent the offseason talking about how they babied Caps and how he’d be in for a wakeup call when the season started with his new team. We all know that since then, Fnatic have been the ones needing a wakeup call in 2019.

After this one, you can’t explain away Fnatic’s start anymore. There is no game they’d prepare harder for or want to win more than this one. And they got crushed.

Let’s start with the draft. G2 Esports first picked Jayce, a very versatile pick that can go to any lane or jungle. Fnatic picked up Ornn and Thresh in their first rotation. Regardless of how strong you think those two champions are, there is a big problem with that rotation. By taking Thresh, you throw away the flexibility of Ornn by declaring that Ornn will be top lane and Thresh will be support. That allows G2 to immediately know that they have a winning lane for Jayce top and are free to counterpick bot lane.

G2 do exactly that in their next rotation, taking Lucian and Braum. They can get in the face of Thresh and Fnatic have no hope of finding a winning lane matchup bot. Of the meta champions left, Ezreal would have made a lot of sense here for Fnatic. They could concede lane priority but still have a strong scaling champion that can farm well in a losing lane.

Instead, they picked Jinx. Into Lucian and Braum. While already having locked themselves into Ornn vs Jayce.

Now trying to figure out who to blame for drafting is impossible. Players aren’t machines and have limitations on champion pool, have certain comfort picks, and nobody knows for certain who is making the final call on the picks. However, it’s safe to say that something for Fnatic as a team is failing in the draft phase. They are one of the best teams at converting a lead into wins — as they’ve shown in their two wins this year — but they consistently draft losing lanes that eventually outscale their opponent. They never get the chance to scale and show off their macro play.

All to say, this game was doomed before the players loaded in. G2 Esports made sure of it, converting the fastest win in the history of the EU LCS/LEC in 20:35.

Shockingly, Perkz and Mikyx picked up First Blood bot at level 2 by just walking at and killing Hylissang in lane 2v2. G2 followed that up with a free infernal drake take at 7 minutes.

Broxah made his first move top lane just after the drake, picking up a kill on Wunder’s Jayce. Unfortunately, Bwipo was already down 61 to 35 CS only 7 minutes in and would still remain well behind Wunder in gold, just based on the awful lane matchup. Meanwhile, G2 brought Jankos to dive Rekkles and Hylissang in a 2 for 0 exchange.

It only got worse from there. Jankos walked from lane to lane, picking up kills everywhere he went. G2 had lane priority in all 3 lanes, including in the Zoe vs Lissandra matchup mid. Caps wasn’t a focal point for G2 this game, but that may have been the point of his transfer. He doesn’t have to be on this team.

G2 Esports took a 10k gold lead before 17 minutes, Caps solo killed Nemesis to put a cap on the domination, and the game was over just 3 minutes later.

Jankos and Mikyx both went deathless for G2, while Rekkles and Hylissang had 0 kill participation for Fnatic.

Origen’s first game of the week was a walk in the park. Rogue continue to be winless on the season and were outmatched by Origen throughout the entirety of the game. Consider the damage to champions by Rogue’s team:

Only Sencux’s poke champion Zoe made it to double-digit damage, putting in 11k damage to Origen’s lineup.

The big statement win was in their second match of the week against FC Schalke 04. Schalke had been the clear 2nd place team so far in the LEC, cruising to wins against every team not named G2 Esports.

Origen methodically took Schalke apart, finally flashing some of their potential. Mithy especially looked like his old self, participating in the first three kills of the game for OG and catapulting them to an early lead.

After capturing the first seven kills of the game, OG had an incredible composition to close the game out. Engage from Kennen, Sejuani, and Kalista throwing in Alistar made it so that OG could force fights when and wherever they wanted.

Origen took all 11 turrets, Rift Herald, four elemental drakes, and Baron Nashor in their dominant win. Schalke picked up only two turrets and two kills, and both of those kills came at the cost of allowing OG to pick up more real estate on the map.

OG are coming together as we finish up the first half of the split, and the rest of the LEC will be put on notice.

Misfits’ sOAZ was the first to pick Sylas in the LEC. He went 0/4/0 against FC Schalke 04. Rogue’s Profit was next. He improved Sylas’ numbers in pro play, finishing 0/4/1 against Origen. Finally, Excel’s Expect put together the best Sylas performance of the weekend. He finished 0/0/0 against Fnatic.

Europe’s top laners did not look good on Sylas.

To be fair, you could argue that all three teams that picked Sylas were underdogs in their matchups. Excel had more wins than Fnatic and Misfits had more hype than Schalke, but it wasn’t like G2 Esports were losing to Rogue with Sylas.

Still, teams in Europe might consider some pause when throwing Sylas into a lineup. Neither heavy AP damage nor heavy tank Sylas did much of anything in the game, though he spikes much harder when he reaches level 16. Unfortunately, teams aren’t lasting that long in the current meta.

As the game slows down and tanks become more prevalent on Patch 9.3, Sylas will surely become a better pick. Players and teams will also get better at using the champion, and the sample size of three games is very small. But for now, the answer to NA Jayce might just be EU Sylas.

Player of the Week: Jankos

G2 Esports continued to cruise in the LEC, hardly breaking a sweat against Fnatic and Team Vitality. Jankos crushed it this week, going deathless in both of his games: 4/0/13 on Karthus against Vitality and 6/0/4 on Olaf against Fnatic. Though it was on Karthus, he even had the rare game where the jungler dealt the most damage to champions, dishing out 20.4k to Vitality.

On the season, Jankos dwarfs his LEC jungle competition statistically. His KDA of 12.13 is more than double Xerxe’s 5.5 KDA in second place. He also leads junglers in CS per minute and gold per minute.