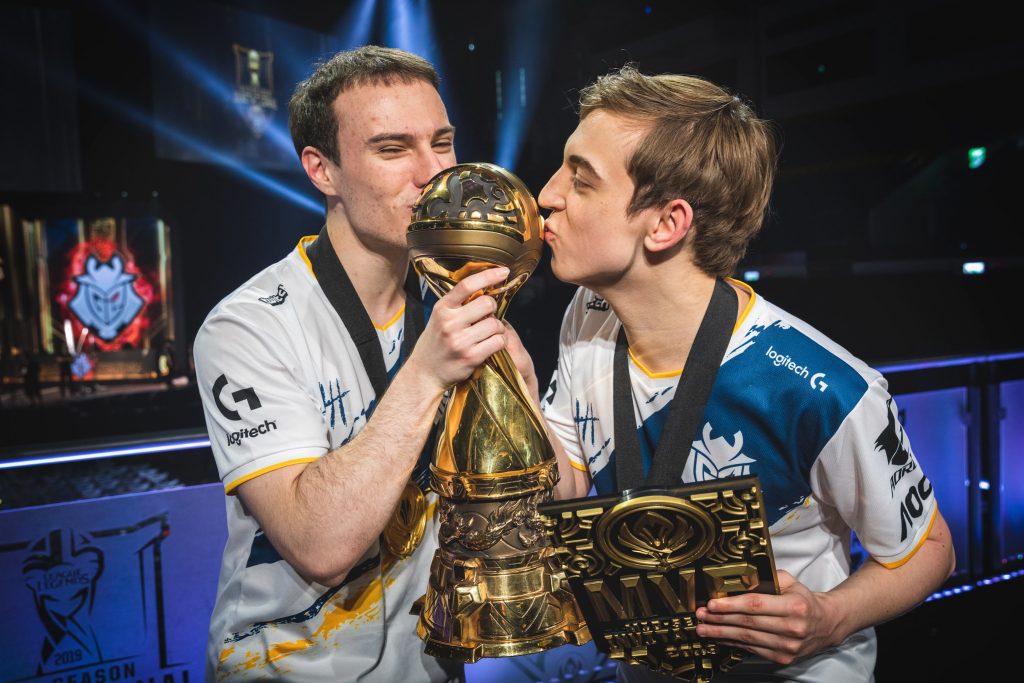 G2 Esports return to the European Championship with the region’s first international title since 2011. Image via Riot Games.

There’s a question rippling around the world of League of Legends after G2 Esports lifted the Mid-Season Invitational trophy in Taipei—is Europe the best region in the world?

Well, maybe. G2 is definitely one of the best teams in the world right now, and you can’t deny that when the side defeated SK Telecom T1 in the grand final. Whether or not you agree the whole region is powerful, one thing’s for sure. When the League of Legends European Championship returns this weekend, more eyes will be on the competition than ever before.

For most of the European teams returning for the LEC Summer Split, their question is simple: can they make it past G2? Right now, that’s all that matters for teams bidding for a championship. If that’s not possible, however, there are still two more slots available for Worlds 2019.

The LEC returns on Friday, June 7, with ten teams competing across a double-round robin format in the regular season. Once nine two-game weekends have been played, the competition breaks into a Top Six finals format. The first and second-seeded teams receive double-elimination changes in the postseason playoffs.

How have the bottom-of-the-table teams improved for Summer?

There were three teams that notably struggled in LEC 2019 Spring—Misfits Gaming (8-10), Excel Esports (5-13) and Rogue (2-16). While Excel and Rogue may be able to blame their poor run on roster composition, Misfits is a different beast altogether.

After signing stars like Paul “sOAZ” Boyer, Fabian “Febiven” Diepstraten and LCK champion Kang “Gorilla” Beom-hyun, many expected Misfits to be battling for the title in Spring. Instead, they suffered defeat after defeat and never seemed to click.

Misfits have looked lost in the LEC, despite boasting a roster dripping with international talent. (Image via Riot Games)

For Misfits fans, the LEC Summer Split may be a major concern, as the team decided against making roster swaps. Not so for Excel and Rogue, both of whom have made major overhauls to their starting squad in a bid to challenge for playoffs, and Worlds.

Kacper “Inspired” Słoma and Finn “Finn” Wiestål have joined Rogue from their regional team, while the team also signed Marcin “Selfie” Wolski on a trade-swap deal for Kim “Wadid” Bae-in. On paper, this team is one blooming with potential, and just waiting to have it tapped properly. Rogue will be a wildcard this season for LEC, with their possibilities resting on whether their young graduates can make the jump to the main stage.

Excel has also seen an improvement, on paper, for their roster. Former Worlds semifinalist Petter “Hjarnan” Freyschuss has returned to the European Championship with something to prove, while the UK organization also added former Schalke 04 coach David “DLim” Lim.

Out of the bottom three teams, Rogue has the best chance to boost themselves into playoffs. How these three teams play against each other will be key for their campaigns, however, and early clashes between them will be must-watch matches to determine their eventual fates.

Which LEC representatives could earn qualification to Worlds?

Between the bottom teams in the LEC, and behind G2 Esports right now, lie several Worlds contenders. Team Vitality, Origen and Worlds finalists Fnatic could all potentially click into form in the middle of the split to challenge G2 or, like Fnatic in Spring, could tumble down the standings after a series of bad results.

Fnatic had a terrible start to Spring, before bouncing back with an 8-0 record to close out the split. (Image via Riot Game)

While Origen were in the grand final in Spring and finished second, it’s more likely Fnatic and Vitality are going to turn on their flair for the upcoming season. After a rocky start for the seven-time champions, Fnatic righted their ship and finished the split on an eight-game winning streak. They even defeated G2 in the final round.

It seems like Fnatic have returned to their 2018 form, minus Rasmus “Caps” Winther, and with the pain of Worlds 2018 still ripe in their minds they will likely march towards qualification with determination, and the form to back it up.

All that may stand in the way of these powerful rosters is G2 Esports.

If winning an international title makes you the best team in the world, then G2 Esports is returning to Europe as the most dangerous team in the world. A 3-0 against North America’s Team Liquid sealed their championship, while a 3-0 over SK Gaming in the LEC 2019 Spring final gave them the berth in the first place.

Really, only SKT have challenge G2 in best-of series in 2019. However, the MSI champions finished only a single win ahead of SK in the regular season, with 13-5 vs 12-6. That is where the rest of Europe can best challenge G2—best-of-ones are notoriously versatile in results, and nothing is guaranteed in the single-game series.

G2 Esports return to Europe having conquered the Mid-Season Invitational over SKT and IG. (Image via Riot Games)

However, this is the farthest a champion has looked ahead of the pack for some time. Because of battles in the final places between teams like Fnatic, Vitality and SK, there will be an opportunity for G2 to streak ahead if they can carry their international momentum back to their domestic battles.

Adding to the fact that the champions were already strong, it must be remembered that support Mihael “Mikyx” Mehle allegedly played most of the Invitational with an injured hand. It was so bad that Hampus “promisq” Mikael Abrahamsson was subbed in at the end of Spring, when G2 suffered the majority of their five losses for the season.

With Mikyx back at full strength alongside ever-improving AD carry Luka “Perkz” Perković, it seems like G2 may not have even hit their highest highs of the year. If the Spanish organization can get on a roll against their LEC rivals, dreaming of an undefeated split may not be out of the realms of possibility.

Then again, North America’s Team Liquid lost to Echo Fox in the LCS’ opening weekend to start with a 1-1 record, after smashing through Spring, so anything is possible. For now, LEC fans are going to have to assume that G2 Esports will be one of their Worlds representatives, at the very least, and that they’re very likely to clinch their sixth European title this Summer.