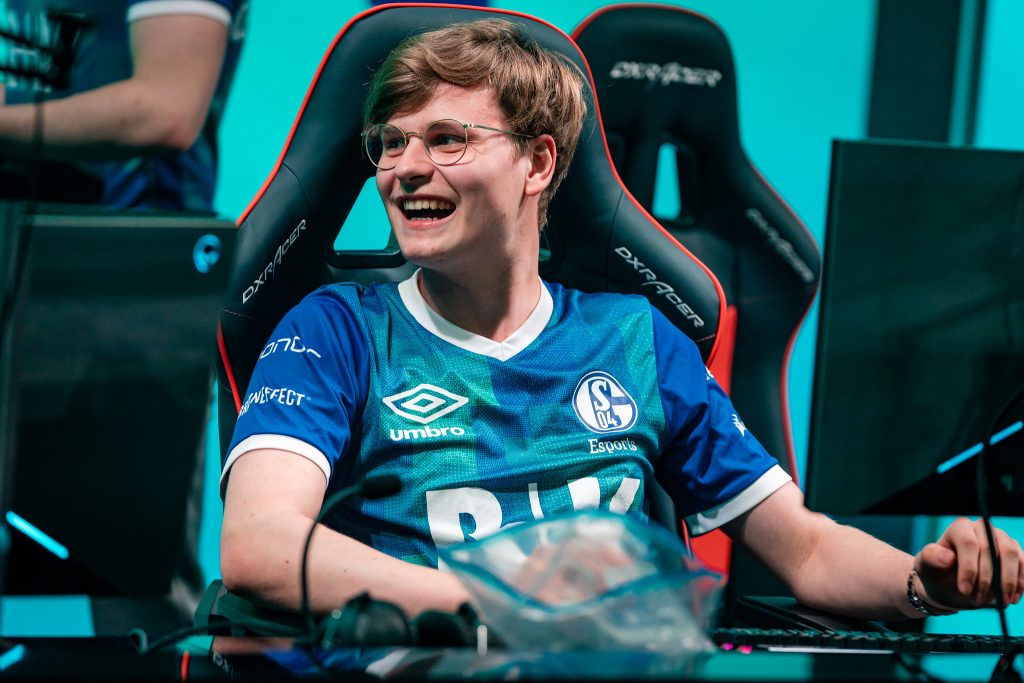 Schalke moves into fourth place with their first 2-0 weekend of LEC Summer 2019. Image via Riot Games.

In the LEC Summer 2019, G2 Esports clocked another 2-0 weekend to move clear at the top while mid-table battlers FC Schalke 04 finally secured their first clean-sweep round with victories over Team Vitality and Excel Esports.

At the other end of the table, SK Gaming has dropped off a cliff. The five-game losing streak has given more teams a chance to move into the top six and bid for those precious playoff positions. We look at where those results leave the LEC after Week 5.

With one of the most exciting rosters in the LEC, including two-time MVP jungler Kim “Trick” Gang-yun and bot lane star Elias “Upset” Lipp, it’s surprising that Schalke had become embroiled in the midfield battle of Summer.

Despite boasting some of the biggest names in the competition outside of the big two in G2 and Fnatic, Schalke has struggled to find a consistent rhythm to their season.

A win over Excel to open their campaign was followed by a 35-minute defeat to SK. Schalke ousted third-placed Splyce in a 45-minute epic, before dropping back into the loser’s circle after being steamrolled by Fnatic.

A win over Misfits came packaged with a loss to Origen in Week 3, and after the Rift Rivals break Schalke defeated Rogue and then slipped up against G2. It’s been a tale of consistency in inconsistency. It’s not been what Schalke have been after at all.

This weekend, however, the German organization has found success in their victories.

First off the bat Upset and support Lee “IgNar” Dong-geun combined on Xayah and Rakan to sweep Vitality away. Schalke’s marksman, in particular, shone in his ongoing personal battles against Amadeu “Attila” Carvalho on the other side of Summoner’s Rift.

The following day, Schalke clinched the 2-0 round with a 19-9 win over Excel. Trick ran rampant in the jungle on new pick Sylas, while Felix “Abbedagge” Braun shone on Aatrox.

Excel nearly found an opening in the 17th minute of the game to keep Schalke’s 1-1 streak alive though. After Abbedagge was caught out by Marc “Caedral” Lamont and Ki “Expect” Dae-han, Excel was able to pinch onto Trick and claim a mountain drake.

It was the only time – apart from a poorly timed Arcane Shift from Upset in the 27th minute – that Excel looked on top of the contest. Schalke was able to close out the clash at the half-hour mark and move into an uncontested top-four spot.

It’s all going wrong for SK Gaming as they slide to ninth place. Image via Riot Games.

SK Gaming in Free-fall Thanks to Losing Streak

While many teams seem to have found their feet after slow starts to the split, SK Gaming was copped with another 0-2 weekend after defeats Origen and Fnatic. The two losses, 32 and 26 minutes in length, stretched SK’s losing streak to five.

SK now drop to a 3-7 record alongside Misfits Gaming. It’s a sorry state of affairs for the squad that laid out playoffs as their aim for Summer, and one that may be irreversible soon if the rapid descent cannot be arrested.

Choi “Pirean” Jun-sik may not be the only reason SK have had such a difficult last three rounds, but his Week 5 performances are an easy place to point the finger for many. 1/5/8 against Origen and 1/6/2 against Fnatic is rough reading.

Even worse for Pirean’s record, eleven of those 19 kills came against Vitality and Excel. Outside of those two defeats, he’s averaged a single kill per game. In a meta where talented mid laners reign, that’s simply not good enough.

The problems with the roster are not just any single player’s burdens to bear, however. A tough streak has sent SK tumbling down the roster, with first, second, and third all in their recent past. The more worrying signs came from losses to Excel (1-9) and Vitality (4-6).

The 19-19 loss to Vitality is passable. Their opponents have been on the upswing recently, and an 8/1/8 performance from Attila is hard to ignore. Excel’s first win may be a little harder to swallow for SK, but the last-placed squad has also been on the rise.

SK Gaming don’t look set for a reprieve yet though. Fourth-placed Schalke and league leaders G2 wait on the horizon next weekend before SK face two organizations placing their full faith in rookie talent: Rogue and Misfits.

With Rogue and Misfits both turning their fortunes around, and Schalke and G2 in strong form, it’s not hard to imagine SK could end Week 7 without another win.

If two more weekends pass them by without change, it’s time to ring the bells for SK. A record of 3-11 isn’t going to earn them playoffs, and with the way the tables going, they may even be in a scrap for last place in the final fortnight of the season.

Game of the Day: Rogue vs Excel Esports

It’s make or break for Excel. They’re up against Rogue’s rookie roster, and they have to prove they have what it takes to win, or risk being left as a footnote on the LEC 2019 Summer split. Rogue are on the rise after a big win over Fnatic – if they want to make finals, Excel is a team they must sweep out of their way. Both teams have a lot to prove in Friday’s clash.

Game of the Day: FC Schalke 04 vs Splyce

Schalke chalked their first 2-0 weekend of the season last round. If they are to stay in the upper tiers of the LEC in Summer, they must back it up with another clean sweep. Splyce, on the other hand, are in a race to potentially lock a top-two seed. The Vipers cannot afford to fall prey to upsets this weekend, or else Fnatic and G2 will forge distance at the top once more.