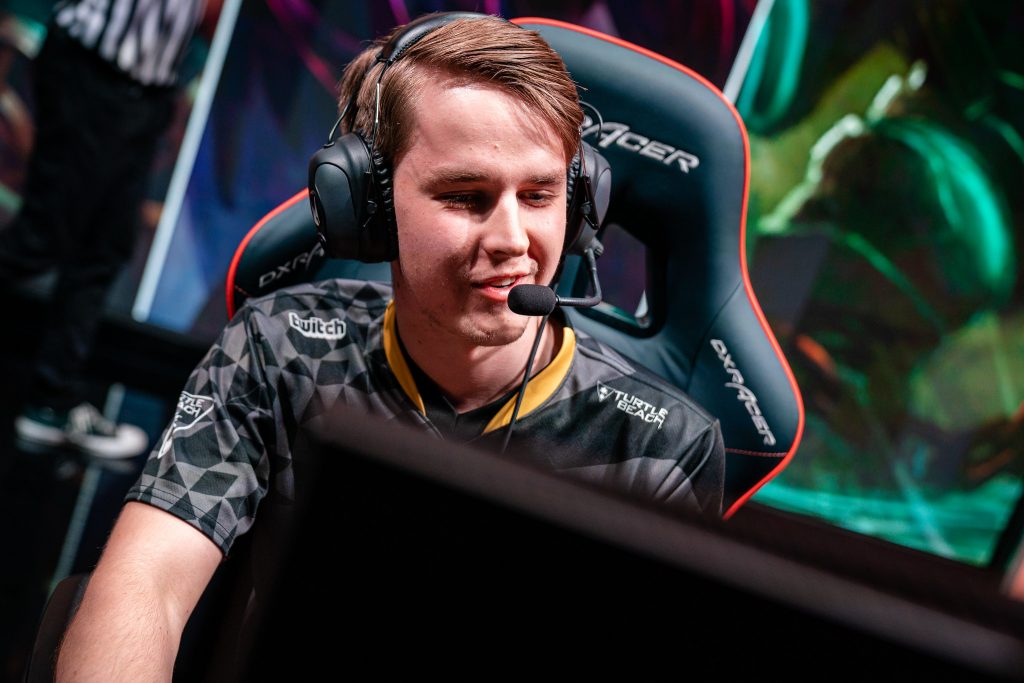 Just when it looked like Fnatic and G2 Esports were set to run away with the League of Legends European Championship title race, a new challenger stated their intent. Fnatic’s undefeated run has been ended by Splyce, and now the third-placed team is in striking range of the top spot. We look at where that leaves the LEC after Week 4.

Splyce Are Finally Here to Play in Summer

One thing is for sure after Splyce’s 42-minute upset victory over league frontrunners Fnatic – the third-placed Vipers can no longer fly under the radar. Their 25-13 win against a team that many were beginning to put in the top tiers of international League of Legends has reopened the battle between Fnatic and G2 Esports at the top and put Splyce right into the mix too.

Funnily enough, Splyce have never been a distinctly Summer-oriented team. The organization definitely had a strong second half of the year in 2016, when they represented Europe on the World stage. Since then the team has always fallen short.

This time, things seem different. Not much has really changed from Spring for Splyce. That’s exactly what they want though. Marek “Humanoid” Brázda was a major coinflip for the team when he first joined the roster. This weekend he blasted Tim “Nemesis” Lipovšek and the rest of Fnatic off the map with a 12/3/7 performance on new champion Qiyana.

Sure, it’s easy to shock a team with a pick they’re not used to. There might be an element of that here. That doesn’t lessen the Czech mid laner’s recent performances though. Splyce were much-maligned for signing Humanoid from Polish organization Illuminar Gaming. Now he’s put himself right in the conversation for one of the best solo laners in the LEC.

Young European mid laners man. What do they feed them on the mainland?

Luckily for Splyce, their roster composition isn’t just based on get Humanoid strong or lose. Kasper “Kobbe” Kobberup has been turning up with his usual late-game prowess in Summer, and the team’s supporting cast of Tamás “Vizicsacsi” Kiss, Andrei “Xerxe” Dragomir, and Tore Hoel “Norsekeren” Eilertsen.

There is one problem with Splyce’s strategies – the Vipers are distinctly a late-game team, and most of their wins have come from dragging the game out to that stage. The third-placed LEC squad has an average game time of 35:13 minutes. In comparison, G2 finishes games eight minutes faster at 27:07, and even mid-game superstars Fnatic boast a 31:06 average.

Only two other teams come close to Splyce’s average – FC Schalke 04 (34:42) who have have a 4-4 record, and last placed Excel Esports (33:42), who won claimed first win of the split against SK Gaming on Saturday.

With the meta so fast-paced, Splyce have to accelerate their gameplay if they want to stay relevant for the rest of the LEC split. It’s not necessarily a bad thing that the team wants to play the control-based metagame, especially with how beast Kobbe has been in Summer. Splyce’s marksman has the second best KDA this split with 8.3. He only trails Martin “Rekkles” Larsson on 9.4.

Bottom line – Splyce’s strategy is working for now. After a Misfits Gaming meeting on Friday evening, the third-placed organization has a battle against G2. This will be the ultimate proving ground of their late-game success. If they can hold off potentially the best team in the world, Splyce are in for a real shot at the title.

Excel Off the Mark Four Weeks into the Season

Europe’s flagging cellar dwellers are officially on the board. It wasn’t the most illustrious victory for the English organization, as they battled to a 30-minute, 6-6 win over SK Gaming. That won’t matter to the team as they moved to a 1-7 record though.

Third time’s the charm for the last-placed roster, after close defeats at the hands of Fnatic last round, and Origen on Friday evening. There were many that had one eye on Excel to break their duck, and SK were the unlucky team that eventually fell.

The game itself was calm and calculated from the young Excel roster. It’s a sign that bodes well for the squad as they look to stamp their authority on the second half of Summer.

Excel Esports are off the mark in Summer, moving to a 1-7 record with their win over SK Gaming (Photo courtesy of Riot Games)

There’s not a lot of hope for them to make playoffs after their 0-7 start, however. Considering they’re now just two wins behind the three-way tie between Rogue, SK Gaming, and Team Vitality, all of whom have a 3-5 record, it’s not impossible.

On the other hand, SK Gaming may just be imploding. Excel had a solid game against the German-based organization, yes, but SK’s mid-game struggles came to the fore in their 30-minute defeat. While Excel kept their foot on the pedal through a near-clinical performance from Patryk “Mystiques” Piórkowski on Tahm Kench, SK’s shot-calling was lackluster at best.

Alongside their support, import mid laner Son “Mickey” Young-min had a strong game on Corki, finishing 3/0/1 with half of Excel’s kills. Head coach David “DLim” Lim brought Mickey in to carry the side. That side of the Korean star has finally emerged.

Overall, Excel don’t have far to go from their 1-7 start to the split unless they forge out a miracle. Not finishing 0-18 will be a major prize for this team, who will be looking to 2020 with their rookie stars. At least they’ve shown they can kick it with the LEC’s best.

Game of the Day: SK Gaming vs Origen

SK Gaming had a woeful mid-game against Excel last Saturday, while Origen struggled to find their feet first in their 40-minute win over the same team, and then their defeat at the hands of Rogue the next day. SK and Origen may be the two orgs hit hardest by the Rift Rivals break, and both need to prove they can overcome this hurdle in Week 5.

Game of the Day: Splyce vs G2 Esports

If you’d told LEC fans that Splyce and G2 Esports would be battling for second place coming the fifth week of the competition, you may have been laughed at. Yet, here we are. Splyce are on the upswing, having just ousted Fnatic in one of the best games of the season so far. Now they have a perfect fixture to prove whether their Summer could be their best yet.