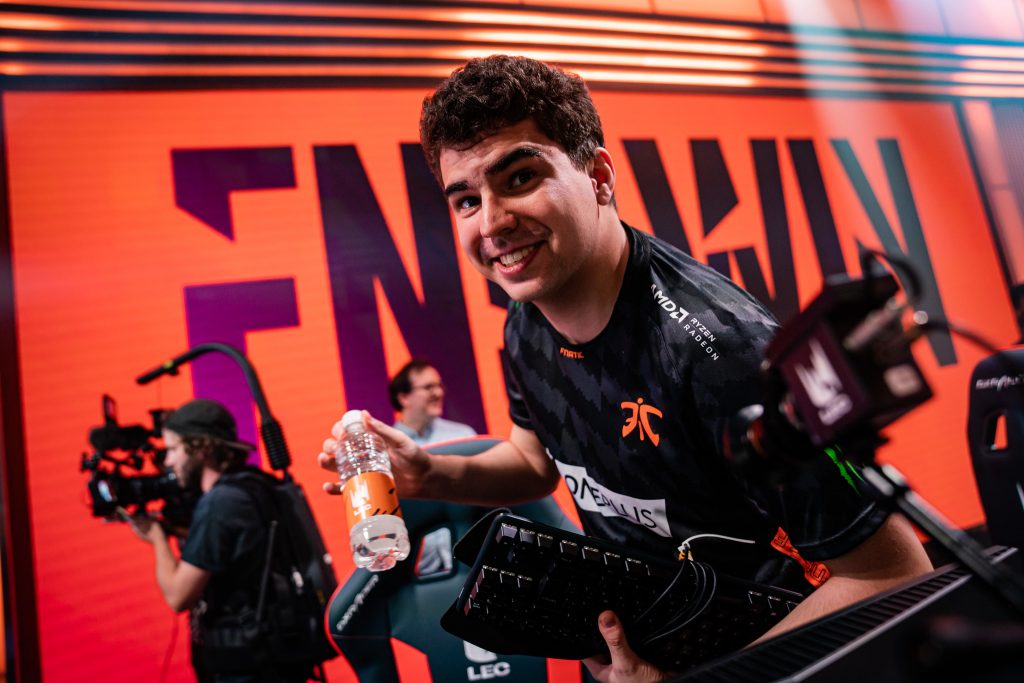 Fnatic have taken sole possession of first place in Europe after a 27-minute win over G2 Esports. Image via Riot Games.

For the first time in Summer, we have an undisputed leader in the LEC. In a potentially first-seed defining battle, G2 Esports were swept aside by Fnatic, and the defending champions dropped to 5-1. Meanwhile, Vitality may have entered the fight for playoffs, while Rogue and Misfits are rapidly falling out of contention. We look at where the LEC has been left after Week 3.

Considering the last time these two European titans met in the regular season it was billed as the “Match of the Century,” it was fair to say there was a lot of expectation around the Week 3 meeting.

Both teams had opened their Summer Seasons undefeated with four straight victories, and many believed Fnatic and G2 Esports were playing some of the best League of Legends in the world.

Fnatic were in the lead by 13.2K gold by the time they shattered G2’s nexus in a 27-minute victory that gave them sole possession of first. It hadn’t been the slugfest that last time’s regular-season battle had offered up. Instead, Fnatic had rolled over the defending champions 27-11 in a lopsided stomp.

There were a few out-of-left-field selections in the draft for Fnatic. After G2 showed in recent weeks that they could slot Pyke into any lane, Zdravets “Hylissang” Iliev Galabov rose to the challenge and selected it bot lane. It slotted in beside Martin “Rekkles” Larsson’s odd-ball Karma pick, and the duo quickly dominated the bottom half of the map.

It was the top side where the early game was won, however. Former Fnatic star Rasmus “Caps” Winther slotted into the top lane on Akali against Gabriël “Bwipo” Rau. He quickly came to regret the swap. Bwipo—playing the aggressive Renekton—opened the bloody game with a solo kill on his former teammate, and rolled on from there to a 9/3/4 final scoreline.

Mads “Broxah” Brock-Pedersen shone on Gragas in the jungle as well. Consistently popping up across the Rift, Broxah contributed to 20 of the 27 eliminations Fnatic earned—one per minute in their swift victory—and was awarded Player of the Game for his efforts.

G2 and Fnatic both turned around and chalked further victories on Saturday, though Fnatic had to come from behind to keep their perfect record intact. Their struggles against winless Excel Esports may have been a hangover from beating G2, but at the end of the weekend, they sit atop the European pile, 6-0 and very much setting the pace of the Summer season.

Team Vitality may have turned a corner in Summer after their 0-4 start has finally been snapped with a 2-0 weekend against Excel and SK Gaming.

First, the squad opened their weekend with a 19-6 dismantling of Excel, which nearly saw enigmatic bot laner Amadeu “Atilla” Carvalho score his first career pentakill. Then the team squared up against playoff hopefuls SK, and matched them 19-19 in a 36-minute match eventually decided by a team fight in front of Baron Nashor.

Both victories give confidence to Vitality that they’ve found their feet after two weeks they’d rather forget. When they faced Origen and Splyce, and then Rogue and G2, the team looked out of touch. Solo efforts were going wrong, ganks and combos were failing, and their macro-play was nearly non-existent. They had collected just 13 kills in their first three games.

Vitality has always appeared to be a confidence-based team. Once their 0-2 weekend started the split, there were many that were worried it was a blow to the ego the French organization may not have been able to recover from. Another 0-2 result seemed to seal that.

Now that they’ve scored two back-to-back wins, including one against a playoff contender rival like SK, the squad looks back on track. They may have gotten an even bigger shot to the arm if Atilla had been able to complete his first pentakill as he chased down Ki “Expect” Dae-han, but a quadra-kill and a win are never going to be sniffed at either.

Danish jungler Thomas “Kirei” Yuen may hold the answers for a Misfits outfit that looks lost on the Rift. Image via Riot Games.

A promising 2-1 start to the split against Misfits, albeit with their victories coming against Rogue and Excel, gave fans of the bunnies a reason to hope for Summer. Three swift defeats to mid-table rivals Origen, SK Gaming, and Schalke have seen the roster’s Spring problems rear their ugly heads once more.

It seems Misfits just don’t have a purpose they can work towards on the Rift. The injection of fast-starting import jungler Thomas “Kirei” Yuen earned them their second win, and it looked like they may have found their groove, but the return of Nubar “Maxlore” Sarafian earned the squad two more defeats.

There’s not an easy answer to their struggles, however. Kirei’s early aggression worked against Excel in Week 2, but when he returned to the side against Schalke in their sixth game he was outpaced by former European MVP Kim “Trick” Gang-yun as the side fell 26-5.

That’s just one poor showing for Kirei though, and not one that defines him. The team’s new jungle recruit showed he has the capacity to hard-carry with his championship run in Turkey, and now they may have to place their faith in him to do the same on the LEC stage.

For Misfits, adding Kirei and rookie mid laner Adam “LIDER” Ilyasov over veteran heads Maxlore and Fabian “Febiven” Diepstraten may yield long-term results, but it remains to be seen if the Dutchman and the Norwegian can do enough to save Misfits’ struggling 2019.

Friday, June 28
Game of the Day: Splyce vs SK Gaming.

Splyce are in third place, one win clear of the mid-table pack. Does that mean they’re the third best team in Europe or have they had a favorable schedule in the opening three weeks? Their meeting with SK Gaming (3-3) should reveal more about the quality of the Kobbe-led vipers as the battle for third continues.

Fresh off the back of a three-game losing streak, Misfits need something to go their way if they’re to slam the brakes on in Summer. On Saturday, they may have already tumbled to four straight with G2 on the menu. Vitality, on the other hand, are on the rise. Fnatic on Friday may through a spanner in the works, but the resurgent team is coming for Misfits’ place in the standings—and beyond—no matter what.