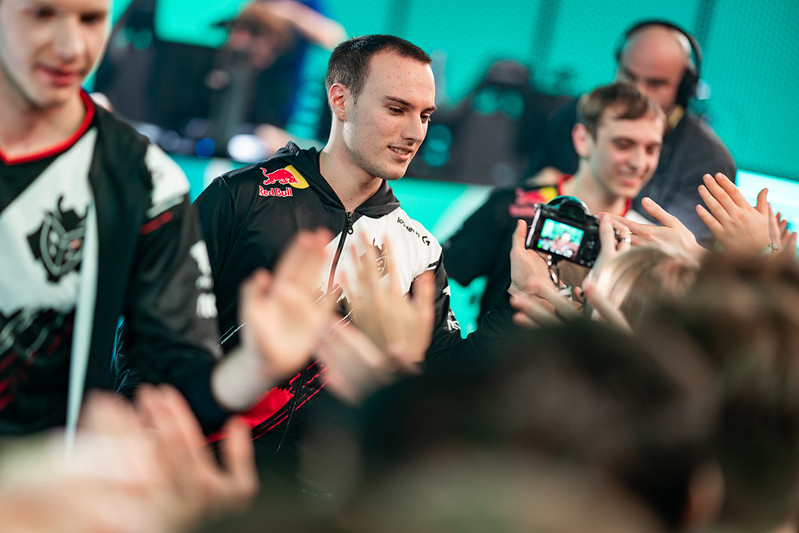 The League of Legends European Championship (LEC) has concluded the second week of the 2020 Spring Split. G2 Esports are the last remaining undefeated team in the league, while FC Schalke 04 and Team Vitality have yet to claim a win. We take a look at where things stand in the LEC by looking at the top story lines so far in Europe.

Can Anyone Stop G2 Esports?

Through two weeks of the Spring Split, it is clear that G2 Esports remain the class of Europe. After another 2-0 week, they are already the last remaining undefeated team in the region and have shown no signs of weakness so far.

Their first match against Team Vitality was a slaughter. The only death G2 conceded was Martin “Mikyx” Hansen’s Soraka getting ganked by the CC-train of Ornn and Gragas. Meanwhile, Luka “Perkz” Perković continued to show no rust as a mid laner, accumulating a 50 CS lead mid lane before 10 minutes. With the safety of a Soraka and Thresh, Perkz consistently danced around death, finishing 7/0/7 while dealing twice as much damage (17.4k) as any other champion in the game.

G2’s second match of the week against Origen was supposed to be their first big test of 2020, but G2 also handled them with relative ease. While Origen has plenty of star power of their own, G2 showed they are the more complete team right now. Erlend “Nukeduck” Våtevik Holm hadn’t died in his first three games, but Perkz dominated him in this matchup. Perkz’ Leblanc Flame Horizoned Nukeduck’s counter pick Sylas at 25 minutes, earning himself his second player of the game this week.

But that wasn’t the only mismatch for G2. Mitchell “Destiny” Shaw may blossom into a great player, but Mikyx handily outplayed him in their first matchup. Destiny missed a couple of key engages on G2, while Mikyx landed a hook on Destiny to secure First Blood and Rift Herald. Like Origen, Destiny flashed brilliance, particularly when he predicted Perkz’ dash with a knock-up, but the consistency of Mikyx and G2 was too tough to match.

Perkz is looking like the no-doubt MVP after two weeks, but don’t discount how well Rasmus “Caps” Winther has transitioned to bot lane. An 8/1/17 KDA for the weekend is another incredible score for a player role-swapping for the first time, especially with one of those games against Elias “Upset” Lipp. Mix in Wunder and Marcin “Jankos” Jankowski continuing to be at the top of their roles in the LEC, and it’s tough to see who can stop G2.

That said, G2 will face their toughest test of the season in week three. They play Rogue and Fnatic, the other two 3-1 teams, so G2 have an important week of preparation ahead. But if they continue to play like they have so far this season, can anyone in Europe stop G2?

It was a tumultuous off season for Fabian “Febiven” Diepstraten. He announced that Misfits Gaming had granted him permission to seek other opportunities, but ended up remaining on the roster heading into 2020. Meanwhile, MSF seemed ready to give their starting mid lane role to rookie Ronaldo “Ronaldo” Betea. That was the case for game one of the Neosurf Cup 2020 against Excel Esports, though Febiven played in three of the five games.

Febiven opened the LEC for Misfits, but both he and the team looked over-matched in a pair of losses. Not long ago seen as the premier European mid-laner, Febiven finished week one 1/3/7 in two blowout losses.

Misfits continued to put their faith in Febiven for week two, starting him both games against favored competition. Febiven rewarded that faith with two throwback performances, reminding everyone what he’s capable of in the right situation.

In their game against SK Gaming, that situation was playing as Qiyana in a Baron team fight. Febiven combo’d with Danny “Dan Dan” Le Comte’s Sett for massive burst damage across SK Gaming’s entire team, picking up a double kill and securing Misfits’ first win of the season.

Though that might have been his flashier play of the weekend, Febiven’s most well-rounded performance was in game two against Excel Esports. Son “Mickey” Young-min got to counter pick Febiven’s Leblanc with Morgana, but that made no difference. Febiven was once again a monster on assassin duty, using his chains to set up picks for his team and deleting the squishier targets on Excel. Against an expected playoff team, Febiven went 7/1/7 in a countered matchup while dealing the second-most damage (27.3k) in the game.

With Dan Dan and Ju “Bvoy” Yeong-hoon also coming off strong carry performances, Misfits’ Spring Split prospects look a lot more exciting than they did a week ago. Nothing is more important for them than keeping Febiven rolling, as he’s already shown the ability to be an elite LEC mid laner.

All the meta top laners from Season 10 continued to see play in week two. Ornn, Camille, Gangplank, Aatrox, and Rumble aren’t going anywhere, at least for the foreseeable future. However, two notable additions found their way to the top lane this week: Sett and Soraka.

Sett’s kit is made to counter tanks, making him an easy pick against teams locking up Ornn in an early rotation. But seeing him blind picked and picked into less favorable matchups like Aatrox and Gangplank show that LEC players and teams think the raw numbers on Sett make up for his lack of mobility and engage.

Europe clearly values him so far, banning him in five games and picking him in four. The only champion select that did not feature Sett was G2 versus Origen. That makes sense, though, as G2 were too busy bringing out their own new top lane pick in Soraka.

There haven’t been any recent changes to Soraka to buff her into viability, but pros have started to pick up on her potential as a non-support champion. Several Korean and Chinese ADCs have been running her in solo queue, while Western pro players have favored her as a top laner. Soraka’s spammable abilities make her deceptively annoying to lane against, while her global ultimate can help with plays across the map.

The insertion of Sett and Soraka into the competitive top lane meta is also interesting because of how differently they function. Sett is a playmaker who wants enemies to walk into him for fights, flashing 1v2 potential with the ability to take over games. He is the epitome of a carry top laner to focus your team around.

Meanwhile, Soraka is the exact opposite. It’s a victory for her if she can farm evenly in lane. Picking Soraka is guaranteeing a loss of pressure on the top side of the map and relegates your top laner to a heal-bot for the game. If even LEC’s best top laner Wunder is playing it, you have to think the other teams will catch on and make their top laners add her to their champion pool.

S04 have been one of the surprises of the split, but not in a good way. They look lost as a team and already have an 0-4 hole to climb out of to make playoffs. They take on a suddenly interesting Misfits team who are coming off a 2-0 week. Febiven against Felix “Abbedagge” Braun should be a mismatch for MSF, but S04 need to see more lane dominance by Konstantinos “FORG1VEN” Tzortziou and Han “Dreams” Min-kook.

The big showdown between the LEC’s two top teams. Tim “Nemesis” Lipovšek stood toe-to-toe with Caps in 2019, but this time he’ll be facing Perkz. Oskar “Selfmade” Boderek’s aggressive play style has been a perfect fit alongside Nemesis, making the jungle matchup with Jankos very important. Caps will also get his first chance to lane against former teammates Martin “Rekkles” Larsson and Zdravets “Hylissang” Iliev Galabov.