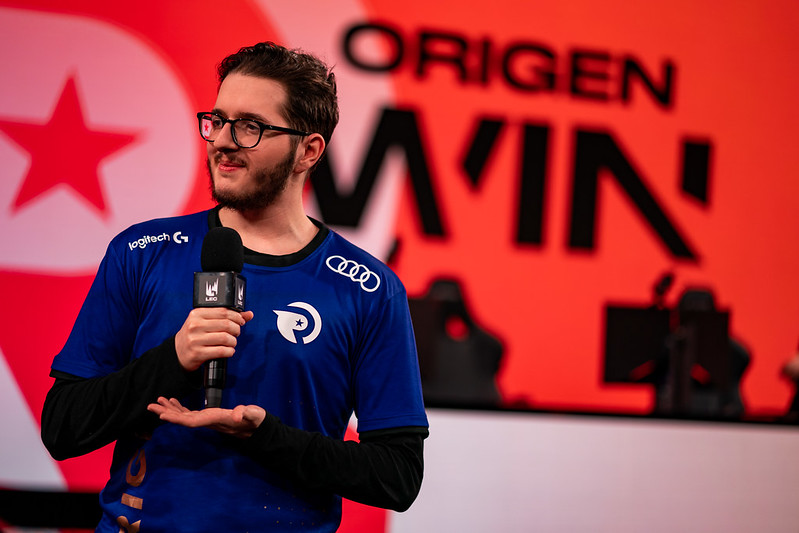 The League of Legends European Championship (LEC) has concluded the first week of the 2020 Spring Split. G2 Esports, Origen, and Rogue were the only teams to finish the first week undefeated, while FC Schalke 04, Misfits Gaming, and Team Vitality have yet to pick up a win. We take a look at where things stand in the LEC by looking at the top story lines so far in Europe.

ORIGEN DOMINANT TO BEGIN THE YEAR

Expectations were high for Origen after their big offseason pickups. They did nothing to slow that hype after a pair of victories over expected playoff teams Fnatic and FC Schalke 04.

Origen continued their momentum with another controlled win over FC Schalke 04. Erlend “Nukeduck” Våtevik Holm outclassed Felix “Abbedagge” Braun mid, earning 18 Mejai’s Soulstealer stacks in a 5/0/8 Leblanc performance. Add in Xerxe outpacing Erberk “Gilius” Demir’s Elise and Origen were able to dominate through the middle of the map. They took the game 15 kills to four in 37 minutes.

As dominant as the wins were, expectations must still be tempered. Remember, Misfits Gaming looked like a pretty good super team to open Spring 2019. It’s also worth pointing out that while OG controlled both games, they took longer than you’d want to see to close them out — 42 minutes against Fnatic and 38 minutes against S04.

Beating Fnatic was enough to send a message that Origen belongs in the elite tier of the LEC. OG have their chances against Rogue and G2 Esports next week to go a step farther and claim their status as the best team in Europe, period.

There was plenty of good news for G2 Esports in the first week of the LEC. The team started 2-0 despite falling behind in the early game twice. Luka “Perkz” Perković picked up right where he left off in mid lane, dominating his lane matchups en route to a 6/1/32 combined K/D/A. The team’s coordination and team fighting looked as good as ever. But with all eyes on Rasmus “Caps” Winther and the new bot lane, the results after two games were a mixed bag.

Things didn’t go well in the early laning phase for Caps and Mihael “Mikyx” Mehle. MAD Lions’ duo picked up a 2v2 kill on Mikyx and followed it up with a kill on a late ganking Marcin “Jankos” Jankowski. MAD then repelled an attempted four-man gank and turned it around to kill Mikyx’s Nautilus a second time in under 10 minutes.

While that may have been written off as Aphelios being too overpowered, G2 also struggled against SK’s Miss Fortune/Leona lane. With the help of Kim “Trick” Gang-yun, SK Gaming picked up First Blood on Caps, which itself wouldn’t be a big deal. But Caps teleported back into lane, prompting Mikyx to walk up and die himself. It was another confusing miscommunication with the new duo.

That said, Caps’ bot lane debut could hardly be deemed a failure. He still held CS leads bot lane despite the missteps, but he really looked the part once G2 entered the mid game. Caps navigated team fights like a seasoned veteran, waiting out enemy cooldowns for large CC effects while maximizing damage up-time. He ended the weekend with an absurd 17/2/20 K/D/A.

Stiffer tests will come for G2’s bot lane, particularly against Origen in week 2. If they can eliminate some early blunders, they already have the makings of an elite pairing.

Rogue took off after they moved Finn “Finn” Wiestål to their starting lineup late in 2019 Summer. The team snuck into the playoffs after a 4-8 start to the season and swept Splyce before falling to FC Schalke 04 in round two. Instead of trying to bid for the highest priced free agents, Rogue focused on retaining and extending their core, bringing back four members for 2020.

Those moves look like they’ve paid off in the early going. Instead of being one-hit wonders, Rogue look to have the core of an LEC playoff team for years to come.

Rogue dominated Misfits Gaming 14 kills to five in their 2020 Spring opener. The only new addition, bot laner Steven “Hans sama” Liv, showed why he was worth it by going 5/1/3 on Aphelios. Hans sama amassed 429 CS, only one short of a Flame Horizon.

Excel Esports put up a better fight, but Rogue also won their second game to finish their first 2-0 weekend as an organization in the LEC. Finn played one of the better Mordekaiser’s we’ve seen so far in 2020 and Hans sama again popped off in a 6/0/8 Senna effort. But the most important play came from Emil “Larssen” Larsson’s Vladimir assassination of Patrik “Patrik” Jírů’s Aphelios.

Rogue have bigger tests coming up on their schedule, particularly against Origen to kick off week two. They may not be in that elite tier yet, but Rogue are quickly cementing themselves as a top-four team in Europe.

Even though fans and players look to champions like Akali, Aphelios, and Senna as some of the most overpowered in the current meta, it was Gragas who dominated week one of the LEC. The fat man went 5-0, despite drawing only one ban and being completely passed over in four games.

Gragas remains strong in pro play for his potent early gank potential and ability to clear the jungle healthily, if not quickly. The threat he provides from fog of war allows his teammates space to breathe in lane and his reach with Flash into Body Slam all but guarantees an enemy Flash in return.

Korea largely ignored Gragas in the KeSPA Cup, but China has started to pick up Gragas as the season progresses. After finishing 20-9 in the Demacia Cup, Gragas rose from a 51.4% pick/ban percentage to 71.4% in week one of the Spring Split. His 18 bans trailed only Elise for most toward a jungle champion.

It would be no surprise to see Gragas even more involved in the pick/ban phase in week two. But given the current trend, he might start showing up as a ban more often than a pick.

Both teams head into week two undefeated and looking to prove they belong next to Fnatic and G2 Esports atop the LEC. Each team also upgraded their ADC in the off season, so expect a good fight between Upset and Hans sama. Finn has inserted himself into the conversation as one of the best top laners in Europe and will get a stiff test against the proven star Alphari.

No disrespect to MAD Lions, SK Gaming, or Team Vitality, but Origen will be G2 Esports’ first true test of 2020 Spring. Both teams have carries in every lane, but G2 should have the synergy advantage over Origen. This will be a good chance to see how Destiny stacks up to Mikyx in his first year of LEC action. Mikyx’s veteran experience could be key for G2 to set up their famous mid game team fights.