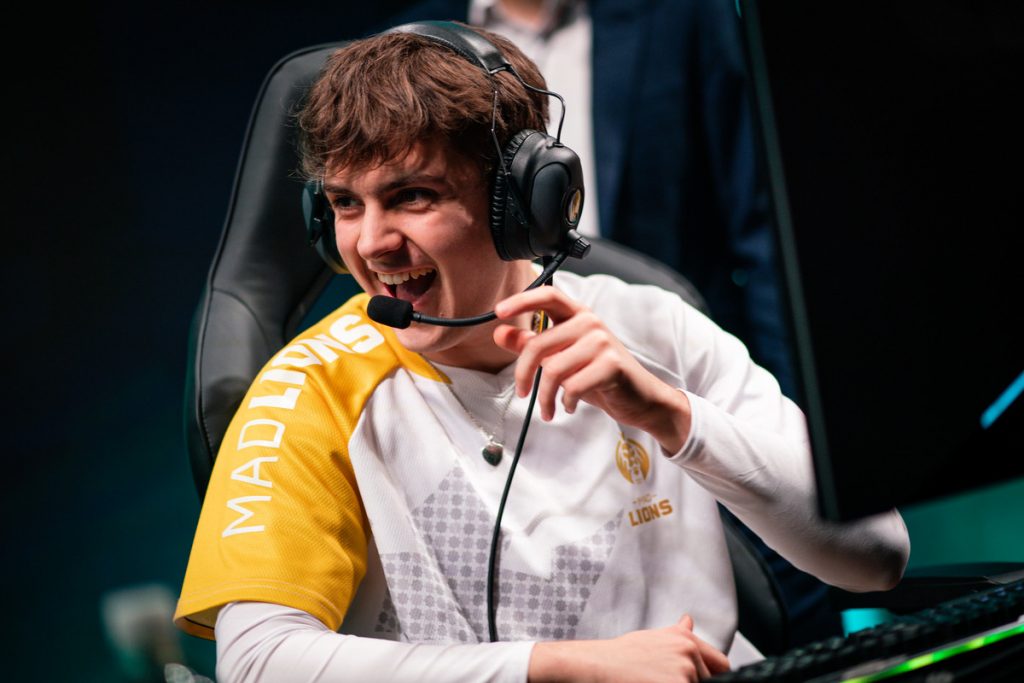 The League of Legends European Championship (LEC) Summer playoffs continue on with week two. The MAD Lions put an end to FC Schalke 04’s miracle run, securing the fourth and final LEC World Championship berth. Meanwhile, Fnatic finally picked up their first win over G2 Esports in 2020. We take a look at where things stand in the LEC by looking at the top storylines so far in Europe.

With Fnatic, G2 Esports, and Rogue claiming the first three LEC World Championship spots, the match between the MAD Lions and FC Schalke 04 was effectively a play-in series. Though both teams surely wanted to win the LEC Summer Split, there was no denying that this would be their most important match of the season. A loss later would sting, but a loss here would end your entire year.

FC Schalke 04 were probably considered the favorites heading into the match. Besides the fact that S04 entered the series on a 10-game win streak, S04 beat the MAD Lions in week eight to qualify for the playoffs. Even if MAD were the consistently better teams over the entire year, S04 got hot at the right time.

S04 extended their winning streak to 11 games by winning game one of the series. S04 picked on Zhiqiang “Shad0w” Zhao’s Sett, forcing him into a 1/7/3 score. Felix “Abbedagge” Braun continued his run of dominating every game, going 8/1/8 on Orianna. ADC Matúš “Neon” Jakubčík’s Ashe continued his steady play, going 4/0/11 with a game-high 28.5k damage dealt to MAD.

But after their opening loss, the MAD Lions flipped the switch. They quickly dispatched S04 in game two, needing only 28 minutes to win 15 kills to 5. Shad0w’s Lee Sin dominated his matchup with Erberk “Gilius” Demir this time, going 5/0/4 to Gilius’ 0/4/1. MAD’s bot lane also started to assert their dominance over S04’s bot lane in what would end up being the key to turning the series around.

Matyáš “Carzzy” Orság’s Ashe ended the game up 60 CS on Neon’s Senna in game two, but he and Norman “Kaiser” Kaiser were just getting started. Playing the same ADC matchup in game three, Carzzy (6/3/9) and MAD again came out on top. Shad0w also showed his ability to play Lillia, going 6/1/10 with a damage-focused build.

With the MAD Lions now a game away from clinching their Worlds berth, they went right back to Lillia. An early double kill springboarded Shad0w ahead of Gilius’ Lee Sin, and the Lions never looked back. Carzzy and Kaiser dismantled the S04 bot lane once again, this time playing the Senna side of the previous matchups. Carzzy went 3/2/18 while Neon went only 1/7/6 in S04’s final game of the season. Abbedagge’s Orianna (4/3/5) tried to carry, but the MAD Lions were just the more complete team. They won the series finale 25 kills to 14 in 31 minutes.

The MAD Lions later had a match with Rogue to try to move up in the LEC pecking order but lost, locking them into Europe’s fourth seed. They will have to open in the Play-In stage of the World Championship, but they have qualified. Regardless of how they perform at the tournament, this will be a great learning experience for the team. All five of their players are under contract through at least 2021, so they look like a good bet to stick together for multiple runs.

While it was great to see a young team like the MAD Lions get their first shot at Worlds, it was heartbreaking to see FC Schalke 04 fall short of qualification. No team improved more throughout the course of a single season, perhaps in the history of League of Legends. Victory Five went from winless in the Spring to a top contender in the Summer, but that was two different seasons with two different lineups. S04 went from a team who couldn’t win a single game in the LEC to the most feared opponent in a single split.

Much of their success came from unlocking the confidence of Abbedagge and Gilius. It had been clear that the duo had plenty of talent, but Abbedagge especially struggled to translate his scrim success to the stage. If the coronavirus pandemic forcing the LEC online helped any teams, S04 would be one of the leading candidates. It didn’t happen immediately, but the lack of pressure from expectations and live crowds seemed to help S04 play more freely later in the year.

The team functioned well with Abbedagge as the big-time carry, putting Gilius on aggressive champions to help him get ahead. Neon and Andrei “Odoamne” Pascu fit their roles well as solid players who were willing to cede resources when necessary. The MAD Lions eventually took advantage of S04’s bot lane, but MAD also boast one of the best bot lane duos in Europe.

These last few weeks I could finally feel again that i love playing the game, thanks to all the effort that my teammates and teamstaff put in and ofcourse all the support from the fans, it was a very fun ride. Thanks @dreams1LoL @neon_euw @GiliusLoL @OdoamneLoL ❤️

Unfortunately, this might be the last we see of this S04 roster. Odoamne, Abbedagge, Neon, and Han “Dreams” Min-kook all see their contracts set to expire in November. Only Gilius of the starters remains signed through 2021. Abbedagge’s second half surge will certainly make him a hot commodity on the open market, so it will be interesting to see if S04 can retain him.

Odoamne played very well down the stretch and offers a great veteran presence, so he would be a great re-sign as well. Neon and Dreams played well to end the season, but they don’t offer the same upside as the rest of the team. S04 could re-evaluate their options there for 2021. Regardless, every player in the starting lineup surely boosted their career prospects with their strong finish to the season.

Fnatic could not touch G2 Esports in 2020. Realistically, Fnatic have had trouble beating G2 Esports ever since Rasmus “Caps” Winther switched teams, but 2020 had been especially brutal. G2 Esports won all four regular season matchups and swept Fnatic 3-0 in the Spring Split Finals. Even with both teams massively struggling, at least by their own lofty standards, G2’s struggles didn’t extend to their games against Fnatic.

That all changed with their Upper Bracket Final matchup in the playoffs. Fnatic’s game one win was a statement that this wouldn’t be like all the other matches. Oskar “Selfmade” Boderek showed why Fnatic acquired him in the off-season, going 8/1/8 on Hecarim. Fnatic won 21 kills to 8 in 32 minutes for their first win against G2 in 2020.

Fnatic wouldn’t just run over G2, though. G2 won games two and four, while Fnatic won game three. Caps played out of his mind in the G2 wins, going a combined 13/1/16. When G2 dominated game four 17 kills to 4 in less than 26 minutes, it looked like this would another G2 triumph.

But after four relatively one-sided games, game five was close throughout. G2 built small leads up to 1k in the early going, but the gold stayed within 2k in either direction for the first 30+ minutes. A five-for-zero Fnatic ace at 32 minutes broke it open in their favor, but a Luka “Perkz” Perković triple kill at 41 minutes looked like it could be a game ender. G2 had four members alive to push for the win, while Fnatic had just Tim “Nemesis” Lipovšek’s Lucian and Martin “Rekkles” Larsson’s Senna. Somehow, the husband and wife combo held off G2’s game-winning push, allowing Fnatic to turn around and secure Ocean Soul.

With a pair of kills in that fight, Fnatic were now pushing for the win. Perkz went for a sneaky backdoor attempt, but Nemesis was waiting at the Nexus with teleport to hold him off. Nemesis easily solo killed Perkz, Fnatic continued their push, and Fnatic secured their berth in the Summer Finals. They won game five 21 kills to 13 in 44 minutes.

Fnatic will face the winner of G2 Esports and Rogue for the LEC Finals.

Rogue’s 3-0 loss to Fnatic in the first round of the playoffs, coupled with FC Schalke 04’s miracle run coming to an end, made Rogue a target for criticism. Because of their first place finish in the regular season, Rogue did not need to win a single best-of-five series in 2020 to make Worlds. And going into their match against the MAD Lions in the Lower Bracket, they hadn’t. Rogue lost to Origen 3-1 in the Spring in addition to the Fnatic loss.

So, though Rogue were already secure in their Worlds qualification, the team felt they had a lot to prove in their match against the MAD Lions. Whether gained fairly or unfairly, no team wants to be labeled as chokers. Fortunately for Rogue, their series against the MAD Lions should put a rest to all of those doubts.

Are we allowed to go Worlds now? XD #LEC

Rogue dominated their series against the MAD Lions from start to finish, picking up a clean 3-0 sweep. Rogue secured 60 kills to MAD’s 25 in the series, further showing how one-sided the series was. Jungler Kacper “Inspired” Słoma was named player of the series, going 15/5/24 against Shad0w. Rogue thoroughly dominated the team that just beat FC Schalke 04 3-1. There is no doubt now that Europe qualified their four strongest teams to the World Championship.

With that win, Rogue also secured their spot in the Main Event.

The LEC playoffs will wrap up next week. G2 Esports and Rogue will begin with the Lower Bracket Finals on Saturday, September 5th at 8 a.m. PST. The winner will move on to face Fnatic in the Summer Finals on Sunday, September 6th, also at 8 a.m. PDT.