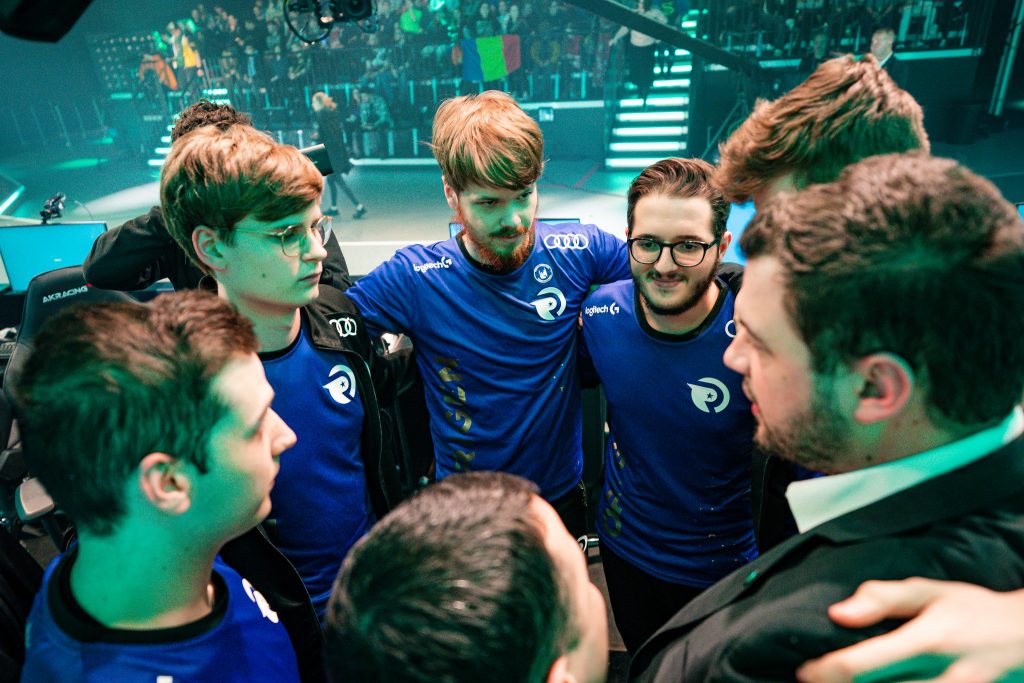 Origen took care of Rogue 3-1 in Round 2 of the LEC Playoffs to set up a date with G2 Esports. (Photo courtesy Michal Konkol - Riot Games)

Two of the favorites heading into the 2020 League of Legends European Championship (LEC) Spring Split faced off in Round 2 of the playoffs. Origen were sent to the Lower bracket after a Round 1 loss to Fnatic, while Rogue advanced from Round 1 with a 3-1 victory over Misfits Gaming.

Origen showed why they were the more consistent team in the regular season by dispatching Rogue 3-1 to advance to Round 3. Origen will take on G2 Esports next in an elimination match, while Rogue have been sent home until the Summer Split.

In a battle between teams known for their late-game team fighting, both teams drafted with scaling in mind in game one. Origen first picked Renekton for Barney “Alphari” Morris, but Aphelios and Kassadin offered them late-game insurance. Rogue prioritized fasting Senna/Tahm Kench for Steven “Hans sama” Liv and Oskar “Vander” Bogdan. Azir, Ornn, and Kindred rounded the composition out to have a potent team fight that scales even better than OG’s composition.

Rogue picked up the first kill of the series at 5:45. Mitchel “Destiny” Shaw landed a Thresh hook on Hans sama to kick off a 3v3 bot, but Finn “Finn” Wiestål’s Ornn joined the party with teleport. Alphari had just expended his to return top, so Rogue had a 4v3 advantage bot. Finn hit a nice double knock up on Origen and Hans sama followed up for the kill on Destiny. Finn then stayed in the bot lane brush as he leveled up to six and used his Call of the Forge God to catch Elias “Upset” Lipp’s Aphelios out under turret for another Rogue kill.

Did we do anything crazy or how did we win a game? woof. #GoRogue

With their early lead, Rogue secured the first three drakes of the game without contest. Origen postured around the fourth drake spawn at 25 minutes, but Erlend “Nukeduck” Våtevik Holm’s Kassadin never teleported in and Rogue picked up Cloud Soul uncontested. With that power spike, Rogue took Baron for free two minutes later to take command of the game.

Origen finally tried to contest an objective at Elder Drake 35 minutes in, but by then it was too late. Kacper “Inspired” Słoma’s Kindred secured the objective despite Andrei “Xerxe” Dragomir’s steal attempt and Rogue won the ensuing team fight four-kills-to-zero. They took game one 10-kills-to-2 in 35 minutes.

Though the teams swapped sides for game two, the champion priorities were similar. Rogue got first pick and grabbed Renekton for Finn, while Origen responded with Senna for Upset. The teams once again drafted with team fights in mind with Yuumi, Sejuani, and Corki versus Zilean, Cassiopeia, and Kennen. Rogue had the better engage, but Origen had a ridiculous amount of AoE damage if they could get the right fights.

Xerxe’s jungle Sett got the action kicked off in game two. He visited top lane at five minutes and picked up an easy kill on an overextended Renekton. He then ganked Finn twice more pre-12 minutes, earning Origen an early three kills. OG knocked down four turrets and took two dragons by 15 minutes to go up 5k gold early.

Rogue did try to fight to stop Origen from taking Mountain Soul at 23 minutes, but their attempt was a disaster. Inspired missed his Sejuani ult and Emil “Larsson” Larsson’s Corki died on OG’s re-engage. Now up 6k gold with Mountain Soul, OG were not going to be stopped.

OG secured Baron at 26 minutes and used it to push for the win. Rogue had plenty of engage, but Kennen, Cassiopeia, and Zilean all welcome engages into them. OG steamrolled Rogue’s base to take a flawless nine-kills-to-zero win in game two. One turret taken by Rogue was the only thing that prevented a perfect game by Origen.

Origen switched things up in game three to have an earlier power spike than their previous compositions. Miss Fortune and Nautilus are effective earlier than Aphelios and Tahm Kench, as is Aatrox into Ornn. Xerxe picked Pantheon to make sure he could offer pressure and support early for his teammates. Rogue continued with their preference for scaling and team fights.

Rogue bit off more than they could chew in a top dive gone wrong at 12 minutes. Their four-man squad pushed Upset and Destiny off the top wave, but Rogue wanted more for their time commitment. Inspired jumped in between the two turrets to hard commit, but OG responded with Xerxe’s Pantheon Grand Skyfall and Alphari’s teleport. Now with Rogue trapped between two turrets, OG collapsed for a huge four kills for zero team fight and 1.5k gold lead.

Despite winning the early skirmishes and taking a gold lead, Rogue picked up three of the first four drakes to keep the game extended. Dragons were only tied up at three apiece when Origen went for their second Baron at 39 minutes. Rogue showed up too late to contest the objective but did pick up two kills as Origen tried to get away.

Inspired went for the smite steal on Elder Drake at 42 minutes, but Xerxe came up clutch in a 1v2 to secure it for OG. With their gold lead and the Elder buff, OG had an easy time wiping Rogue five kills to two. With long death timers, OG pushed in for a 19-kill-to-10 win in 43 minutes.

With their backs against the wall, Rogue clearly didn’t think their compositions were the issue. They prioritized Aphelios for Hans sama again and went back to their Ornn, Sejuani, and Tahm Kench staples. Irelia was blind picked for Larssen, allowing Nukeduck to opt into the Leblanc matchup. With Rogue focusing so hard on scaling, OG were happy to once again field a lineup with an earlier power spike.

Hans sama came within 100 HP of a double kill to open things up at 5 minutes, but Alphari’s teleport saved OG and netted him First Blood. The difference between Aphelios getting two early kills versus dying for nothing in lane was monumental for the early game.

With that play working out, OG had the upper hand in every skirmish for the rest of the game. Rogue felt forced to contest objectives because OG are such a well-coordinated team with a lead, but their composition could not stand up to the power of Renekton, Sett, Leblanc, and Miss Fortune in the mid-game.

🇬🇧 @Deficiolol: "We just sent the players home. Playing 4 games in a raw takes some energy, it's a little bit harder online. There is a lot more work to be done in-between games. Very happy with the ending. Tomorrow is going to be a reset day. Thank you all for the support!" pic.twitter.com/zhqHeydxyB

Down 20-kills-to-3 at 26 minutes, Rogue went for a desperation Baron. Inspired’s Sejuani went down before Baron was in range for smite and Upset’s Miss Fortune Bullet Time ended up securing the objective for OG. OG wiped the team fight and needed only one more push to put an end to the series. In the end, it was a 30-kill-to-3 stomp in 28 minutes.

The LEC rolls on with the Winner’s bracket finals next up on the schedule. MAD Lions and Fnatic will meet on Saturday, April 11th at 8 a.m. PST with a spot in the finals on the line.