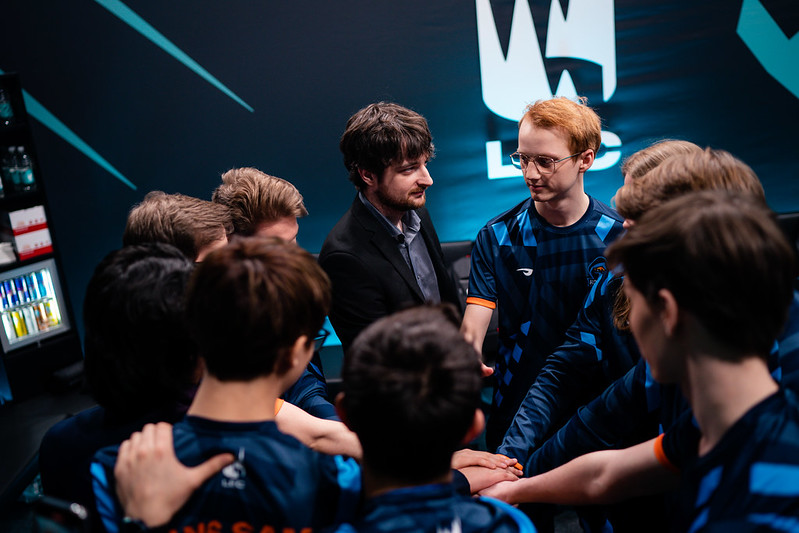 Rogue took care of Misfits Gaming 3-1 to advance to Round 2 of the playoffs. (Photo courtesy Michal Konkol - Riot Games)

After great starts to the season for both Rogue and Misfits Gaming, a disappointing final two weeks of the 2020 LEC Spring Split regular season saw both drop to the final two playoff seeds. Instead of starting their run in the Winner’s bracket, the loser of this series would be immediately out of the playoffs.

Rogue made sure their season would go on with a 3-1 series win over Misfits Gaming. They advance to play Origen in Round 2, while Misfits Gaming’s surprising season has come to an end.

Rogue made the first play of the series. Crashing bot wave at 2:20, they attempted an early dive with Kacper “Inspired” Słoma’s Taliyah behind Misfits Gaming’s turret. Unfortunately for Rogue, Iván “Razork” Martín’s Sejuani pathed straight down to bot, getting there just in time to thwart the dive. Both Inspired and Oskar “Vander” Bogdan’s Thresh fell to Razork and Ju “Bvoy” Yeong-hoon’s Kalista to put Misfits ahead early.

Fabian “Febiven” Diepstraten’s Zoe was an important part of Misfits’ mid game. His burst damage allowed him to pick off multiple members of Rogue, especially when combined with Razork’s Sejuani ult. Misfits only grew their early lead through the mid game.

Misfits picked up Baron just prior to 22 minutes. Rogue were unable to fight because Steven “Hans sama” Liv’s Draven was a full item behind Bvoy’s Kalista and Febiven’s poke made it hard for them to get a good engage. Misfits then picked up Ocean Soul at 24 minutes to give them the most powerful Soul in the game.

Posted by our GM @garkilol this February:

"The best thing about Bvoy is that he's getting better over time. We've picked champs like Senna and Miss Fortune, but it’ll be gg once he locks in a hyper carry. Just know you haven’t seen everything he can do yet."

After taking two inhibitors, Misfits backed off to set up for Elder Drake spawn. Rogue made a last gasp attempt at picking off Razork, but he was tanky enough for his team to arrive to save him. Misfits picked up four kills and moved straight into Rogue’s base to end the game. Misfits took game one with a dominant 16 kills to two edge in 29 minutes.

Rogue bounced back in game two. Inspired picked Sejuani away from Razork and was active early. He picked up two or Rogue’s first three kills and helped them jump out to an early gold and turret lead.

Finn “Finn” Wiestål played Renekton top again, but this time it was into Danny “Dan Dan” Le Comte’s Ornn. Finn was up nearly 100 CS by 20 minutes and was impossible for any member of Misfits to stop in the side lane, especially Dan Dan.

Rogue were in total control of the game as they took Baron at 24 minutes, but took their time as a slow-paced team. After using the buff to grow their gold lead, they were up 7k gold when the teams fought in top river at 34 minutes. With the sustained damage of Azir, Rogue took the fight slowly and chipped away at Misfits until MSF were in full retreat. The problem for Misfits is that they were retreating toward Rogue’s base.

Don't count us out! We win our first #LEC Game online 😅

Rogue finally corralled them in their top jungle. Emil “Larsson” Larsson’s Azir was in the perfect position to dish out damage, picking up a triple kill as Rogue completely wiped Misfits. The five for zero ace allowed them enough time to make it all the way to Misfits’ base and end the game. They led 13 kills to six as they won game two in 35 minutes.

An early Aatrox pick by Dan Dan allowed Finn to counter pick with his signature Kled. He and Inspired’s Pantheon dominated the top half of the map early, making up for the early double kill Bvoy’s Aphelios got on Hans sama and Vander. Just like in game two, Rogue would have side lane pressure throughout game three.

After a good performance by @FinnLoL he earned the right to play his signature pick.

Our picks for Game 3:

Misfits started Ocean Drake at 21 minutes, hoping Bvoy’s Aphelios would be enough to win them the fight. Instead, Inspired stole the dragon and Rogue cleaned up the team fight with ease. Vander’s Sett The Showstopper kicked off the Rogue CC train and Larssen’s Azir dealt massive damage to the clumped Misfits team. They ended the fight with Ocean Drake, three more kills, and a 3.5k gold lead.

Misfits tried starting the next dragon at 26 minutes, but had similarly disastrous results. Finn’s Kled charged in to disrupt Misfits, and Rogue took an easy five for zero ace. Rogue immediately turned their eyes to Baron, picking up both that buff and Ocean Drake to take an insurmountable lead.

Rogue cracked all three inhibitors before backing off to reset. Misfits used the downtime to deny them Ocean Soul, but their base was in shambles. Rogue waited to sync up their super minion waves and easily pushed through to Misfits’ Nexus to set up match point. Rogue won game three 18 kills to six in 37 minutes. Finn finished 6/0/7 on his pocket pick Kled.

Misfits Gaming raced out to the early lead in game four. The teams fought over Rift Herald at 10 minutes. Rogue secured the objective, but Dan Dan’s Sett picked up First Blood. Febiven’s top roam at 13 minutes gave Misfits another kill, and a dragon fight at 14 minutes grew their early lead to three kills to zero.

With a nice scaling advantage, Misfits were happy to remain even in gold in the mid game. Even if Ornn items would be coming through for Rogue, Misfits’ Sejuani, Rumble, and Aphelios would definitely out scale Renekton, Gragas, and Miss Fortune.

Misfits picked up the first three drakes of the game, setting up Infernal Soul Point at 25 minutes. Rogue knew they couldn’t give that up and made their stand. After Misfits expended their big ultimates and Hans sama barely remained alive in the back line, his Bullet Time turned the fight around for Rogue. Inspired’s Sejuani and Petr “Denyk” Haramach’s Thresh melted, allowing Finn time to recall and teleport back. Rogue denied the Infernal Soul and kept their hopes alive.

The teams met again for the next Infernal spawn. Rogue won that one too, showing a shift in team fight power at this point in the game. The next Infernal fight was the last. Finn immediately took out Bvoy’s Aphelios, Febiven’s Rumble fell quickly, and they secured the Infernal and ran down mid lane. With only Denyk’s Thresh left alive, Rogue destroyed Misfits Gaming’s base to win game four and the series. They won the final game 14 kills to nine in 40 minutes.

Here are the reactions of our players after the #LEC playoff game 😅 #GoRogue pic.twitter.com/yOd7fBmyrA

With the win, Rogue advance to take on Origen in Round 2 of the LEC playoffs. They will meet on Friday, April 10th at 9 a.m. PST.