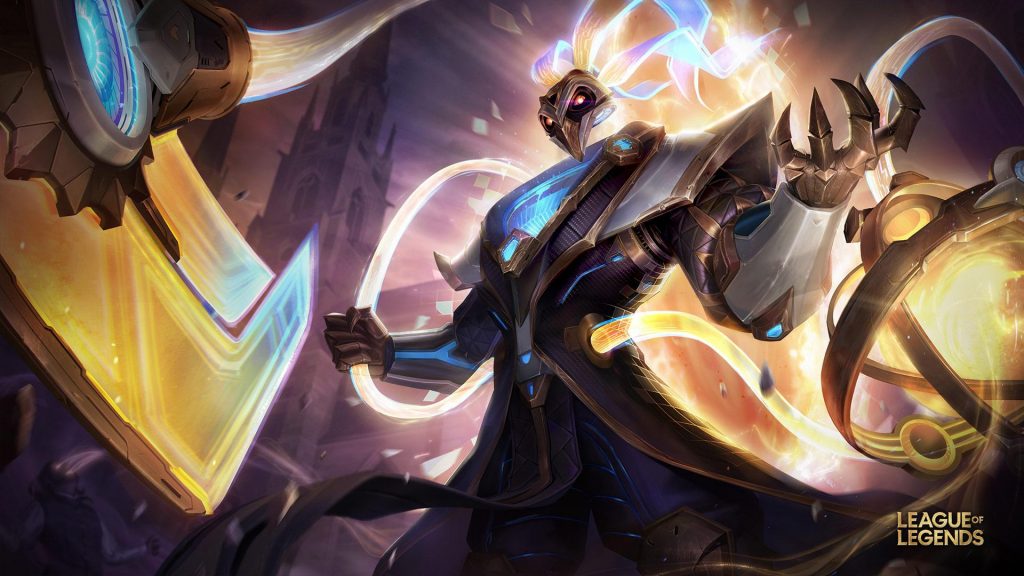 Patch 9.23 has been live for some time and we are here to see just how it has affected League of Legends (Image via Riot Games)

League of Legends Season 9 has come to a close, and Riot has given us tons of changes to seemingly every aspect of Summoner’s Rift, including the Rift itself. Every lane has been affected in some way, with the jungle undergoing the most substantial changes. We’ll give a brief overview of the most important changes, as well as some meta analysis now that patch 9.23 has been live for some time.

Let’s kick the highlights off with support item changes. Instead of purchasing each support item upgrade from the store, support items now automatically upgrade upon quest completion. Furthermore, Ancient Coin has been removed and there are now four support items: two with Relic Shield’s passive (with one granting AD and the other AP), and two with Spellthief’s Edge’s passive (once again with one granting AD and the other AP). Additionally, alcoves have been added to the top and bot lane to create new ganking angles and to allow for more active outplays in the side lanes. 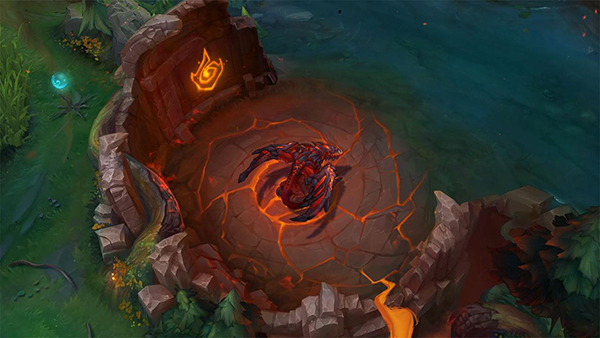 The additional of elemental dragons is a massive game-changer in patch 9.23 (Image via Riot Games)

The major change to Summoner’s Rift involves the introduction of Elemental Dragon-influenced landscape changes. The third drake that spawns changes the map in its own unique way. Infernal burns away some brush and walls in the jungle, Ocean spawns more Honeyfruits and brushes in the jungle, Mountain creates new walls in the jungle and near the Dragon pit, and Cloud creates a zone in the jungle that speeds up champions that walk through it.

The Dragons themselves now grant different buffs, with Mountain increasing armor and magic resist, Cloud granting ultimate cooldown reduction, Ocean restoring a percent of champion missing health every few seconds, and Infernal increasing AD and AP. Upon a team’s fourth capture of a dragon, they are granted a Dragon Soul; a permanent team buff that is unique to each element. Infernal makes attacks explode every few seconds, Ocean grants health regeneration every few seconds on attacks, Mountain creates an out of combat shield on champions, and Cloud grants movement speed after the use of an ultimate ability. The Elder Dragon also received a rework, and now spawns only after a team claims a Dragon Soul.

The new Elder now buffs its slayers with an automatic execution once they drop an opposing champion to 20% health or below. To balance out the map, Riot has changed the Rift Herald to now be able to spawn twice if she is captured early enough in the game, which can help a team exert early lane pressure and cash in on some lucrative plates if used properly. 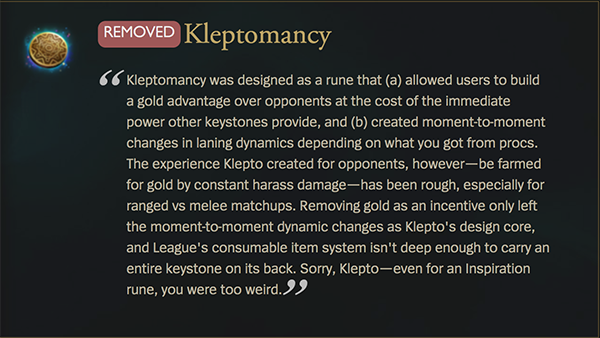 Several runes received changes on 9.23, with the most prevalent changes being to Conqueror, Aftershock, Presence of Mind, Nimbus Cloak, and Kleptomancy. Conqueror has been reworked once again to be similar to the old Fervor of Battle, and now grants two stacks for every melee auto-attack or ability (one stack for ranged auto-attacks). Each stack grants adaptive force depending on your build. Once 10 stacks are reached, 15% of damage done is received as healing.

Aftershock was changed top better serve tanks and fighters over ranged champions who were not intended to use it (that means you, Lissandra). Its flat resistance has been lowered in favor of increased armor and magic resist scaling, meaning champions like Nautilus and Ornn will be much tankier throughout games. In addition to the resistance changes, the cooldown has been lowered from 35 seconds to 20 seconds, which means that tanks can be a bit more aggressive in lane and have a better chance of trading positively.

Presence of Mind no longer grants ultimate cooldown refunds on takedowns and instead grants increased max mana or energy. Champions like Akali and Kassadin will likely enjoy this change.

Finally, Kleptomancy has been removed from the game and replaced by Omnistone, which grants the user a random keystone every so often depending on how quickly it is used. 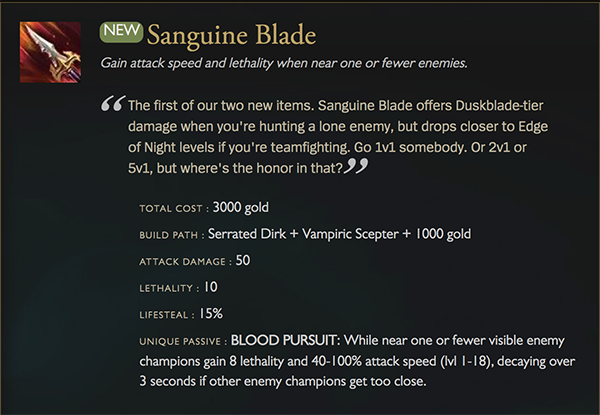 Also featured this preseason are several major changes to items. Ohmwrecker, Zz’rot Portal, Brawler’s Glove, Raptor Cloak, and Spear of Shojin all departed the Rift, with new lethality items brought in as recompense.

Umbral Glaive and Sanguine Blade are two new additions, along with slight reworks to Duskblade of Draktharr and Edge of Night. The most notorious of this bunch, Sanguine Blade, has already been nerfed and remains controversial. The item grants both lethality and lifesteal, with a passive that grants a massive attack speed buff when nearby one or less visible enemy champions.

ADC energized items also got some attention this preseason, most notably Stormrazor. The new Stormrazor is now a crit item and adds a hefty slow to energized basic attacks. Energized effects now stack faster from moving and slower from attacking to promote more kiting from ADC players. Lastly, Cloak of Agility now has 25% critical strike chance and builds into Zeal. 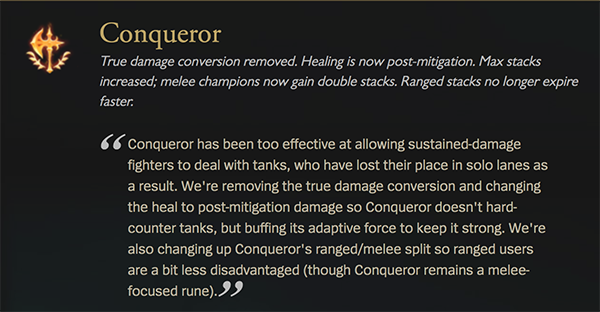 Despite the massive changes on patch 9.23, Conqueror users still rule the day (Image via Riot Games)

As you can see, this preseason has shaken up the meta quite a bit. Despite the massive changes made to League on 9.23, one thing hasn’t changed: Conqueror users still rule the day. That’s right, every non-bruiser’s favorite keystone has not only continued to thrive despite having its true damage removed, but it has exploded in popularity. Champions like Heimerdinger, Ryze, Orianna, Cassiopeia, and Kindred have all adopted the rune, despite the fact that it wasn’t designed for them. However, it is important to note that Conqueror is scheduled to receive nerfs in 9.24, but it remains to be seen how much its effectiveness will be impacted.

On a similar note, champions who can make use of Sanguine Blade such as Nocturne, Shaco, and other 1v1 loving champs, have been seeing a huge spike in playrate, especially Nocturne. The Eternal Nightmare has been terrorizing both solo lanes as well as the jungle this preseason thanks to Sanguine Blade’s insane dueling power. Whether you love it or hate it, there’s no denying Sanguine Blade’s impact this preseason. 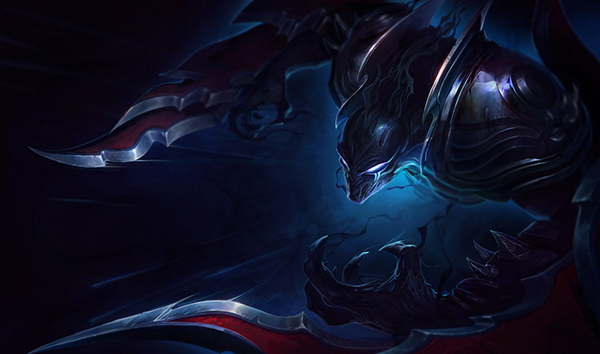 Nocturne has easily become one of the best junglers in League of Legends on patch 9.23 (Image via Riot Games)

With the increased importance of bot side this patch, junglers who can solo dragons and clear fast in the early game have been thriving. Champions like Olaf, Warwick, Shaco, and Nocturne are easy S tier picks in the jungle in the preseason. Objectives, combined with faster respawn timers on jungle camps, have become the deciding factors when determining which junglers will succeed and which will stumble. Moreover, smart jungle pathing and effective ganking are being rewarded, while random pathing and failed ganks are being punished. Catch-up experience has been removed from jungle camps, meaning junglers who spam gank to create lane pressure but fail to secure a kill will rapidly fall behind a power farming jungler.

The preseason is only just beginning, but Riot already has changes lined up to be implemented prior to Season 10. Balance changes are inevitable, of course, but even more exciting than that is the release of the newest marksman champion, Aphelios. Also coming soon is the Night & Dawn event, which will bring with it about a dozen skins and new in-game challenges for players to complete for rewards. All of this is scheduled to be released on December 11, 2019, alongside Patch 9.24 with Night & Dawn kicking off on December 12.