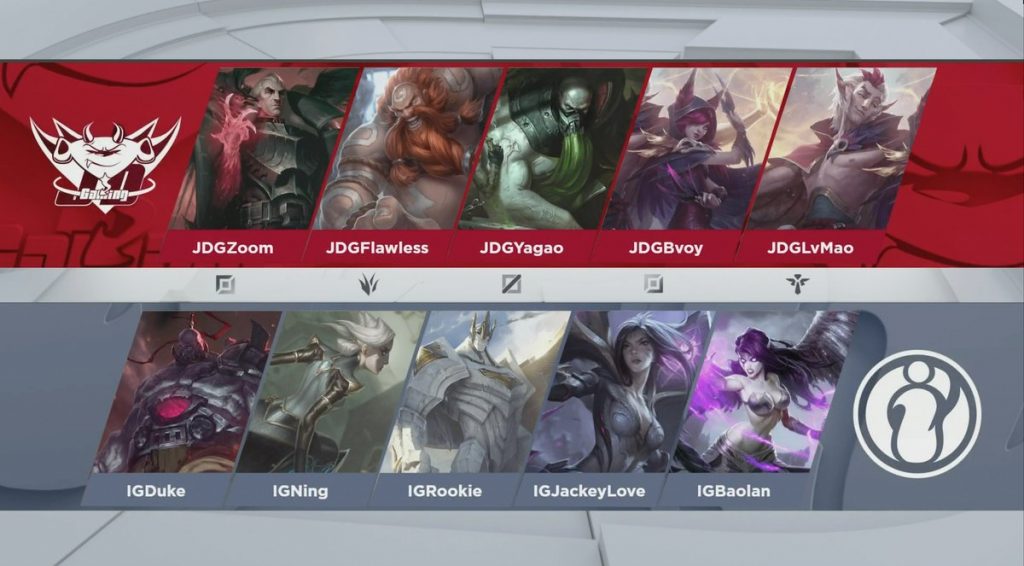 Two weeks are down in the 2019 LPL Spring Split. Suning and Funplus Phoenix have risen to the top of the standings, while LGD Gaming sits at the bottom.

Two weeks are down in the 2019 LPL Spring Split. Suning and Funplus Phoenix have risen to the top of the standings, while LGD Gaming are bringing up the rear. We take a look back at the match results, top storylines, best plays, and standout individual performances from the past week in China.

Game 1 was about what we expected. JD Gaming have rising stars in Zoom and YaGao in their solo lanes, but Rookie and TheShy showed why they are considered the best in the world. Imp continued his struggles despite getting Kai’Sa away from JackeyLove. Levi actually played very well on Olaf, to the tune of a 5/2/1 K/D/A. He also may have convinced JDG he can play a more supportive role with the early Redemption purchase.

JD Gaming made changes starting in Game 2, subbing Levi out for Flawless and Imp for Bvoy. That move paid immediate dividends, as JDG picked up First Blood at 3:57 into Game 2 on a bot gank by Flawless’ Kha’Zix. He repeated the gank only 20 seconds later, able to pick up JackeyLove’s flash and another kill. After finding another kill mid with YaGao’s Lissandra, Flawless participated in the first three kills of the match and solo killed mountain drake to spring JDG to the early lead.

Bvoy didn’t make any flashy plays in Game 2, but he was a solid presence on the team, which is more than you can say about Imp’s contributions so far this season. Rakan and Sion have very strong dive pressure on an AD carry, but fortunately, Ezreal and Tahm Kench have great tools that were able to keep Bvoy safe and pumping out damage. All told, the two substitutions in Game 2 made JDG look like a different animal against the defending world champions.

So why mess with that momentum heading into Game 3? JDG didn’t. Invictus Gaming were the ones to try something new, bringing on Duke for TheShy to go on tank duty. However, the game started the exact same way. Flawless level 3 ganked bot lane, getting flashes out of both JackeyLove’s Kai’Sa and Baolan’s Morgana in addition to First Blood.

Ning attempted to gank Duke’s lane at 6:45, but that proved to be a big mistake. Zoom’s Swain was too tanky with his R Demonic Ascension active and bought enough time for Flawless and YaGao to get top and turn the gank around. JDG took another huge lead early in the game with strong early play from Flawless.

IG fought back at 24 minutes. JDG were feeling strong and pushing top lane after taking the mid inhibitor. Rookie teleported into the middle of JDG and hit a three-man Galio taunt, turning the fight around for IG. Baolan hit a crucial Morgana Q Dark Binding on Flawless at the end of the fight to give IG a big 3 kills to 1 win. With that victory, IG were able to secure Baron and slow the game down despite a 5k gold deficit.

Fights went back and forth from there, as is the tradition in this meta and the LPL specifically. Most importantly for JDG, they were able to find a pick that enabled them to grab their second infernal drake. JDG were able to push down the bot and mid inhibitors, leading to a Baron take, and eventually the series win against Invictus Gaming.

Imp Back on the Bench?

While undoubtedly a signature win for the young JD Gaming lineup, their victory over Invictus Gaming raises questions about Imp’s future with the team. After riding the bench with Team WE in 2018, it was expected that Imp would come onto JD Gaming and recapture his form as a World Champion. That hasn’t happened.

There are always two sides to these numbers. Low gold shares can indicate that a team isn’t playing around a player, leaving him with scraps and making it harder for him to carry. JD Gaming haven’t been playing around Imp, as we’ve mentioned that they have rising stars in their solo lanes in Zoom and YaGao. However, Imp has also shown no reason for JD Gaming to play around him. Bvoy looked like he fit in much better to the current playstyle of the team, and we’d be surprised if he isn’t the option going forward.

Suning cruised along to another 2-0 week, taking care of business against a pair of bottom tier teams in Team WE and Snake Esports. They had no problems closing out the early leads they picked up, as all four of their games ended at or right before 30 minutes.

Most impressively may have been the 6 kills to 4 win in Game 2 against Snake Esports. As a team with the kind of mechanical skill that Suning has, it should be worrying to the rest of the LPL that they can win games through making good map plays. SwordArT’s arrival surely has helped them in that area.

Funplus Phoenix had an important win earlier in the week against JD Gaming, the team that would go on to beat Invictus Gaming. We all knew that Doinb is and would be good, but it’s been surprising how well the rest of the FPX roster has looked so far.

We saw Flawless look great against IG, but Tian’s Xin Zhao outplayed him in this series. Tian finished with a 3/0/6 K/D/A in Game 1 compared to Flawless’ 0/6/3 effort on Gragas. GamGoon also held his own against Zoom, finishing the series with a combined 13/2/8 K/D/A on Urgot and Akali.

The first 5 minutes of the game were fine for Oh My God. After that, it was all Topsports Gaming. Knight kicked off the action with a double kill on Jayce at 6 minutes. At the same time, 369 solo killed Fiora top lane on Renekton. TOP then were able to secure an infernal drake, the absolute worst nightmare for a team that’s already been solo killed twice in the early game.

To be fair to OMG, Renekton, Gragas, Jayce, and Lucian are all early game bullies that snowball when given a lead. Once the early kills started happening, OMG was in big trouble. TOP was strong enough to win any 1v1 on the map and were able to brute force plays over and over.

The game mercifully ended at 22 minutes. The final tally: 10 kills, 10 towers, 2 dragons, and 1 Baron to TOP and nothing but CS and broken dreams to OMG.

Player of the Week: H4cker

While still a top half of the league jungler, H4cker was expected to be more of a glue guy for Suning around their star-studded lineup heading into 2019. Through the first two weeks, he’s shown to be capable of more, perhaps in the mold of a guy like Ning on Invictus Gaming. It’s definitely a lot easier to jungle when you have winning lanes all over the map, but it also takes a great jungler to give laners the tools to be able to win their lanes consistently, and H4cker is doing that for Suning.

His best scoreline came in Game 2 against Team WE when he finished 7/0/10 on Olaf. H4cker played him twice along with Camille twice, focusing on having early pressure on the map rather than a more scaling option in the jungle. That focus allowed his lanes to dominate each game and snowball to quick victories. Additionally, enemy teams got only 4 dragons in his 4 games, compared to the 9 secured by Suning.