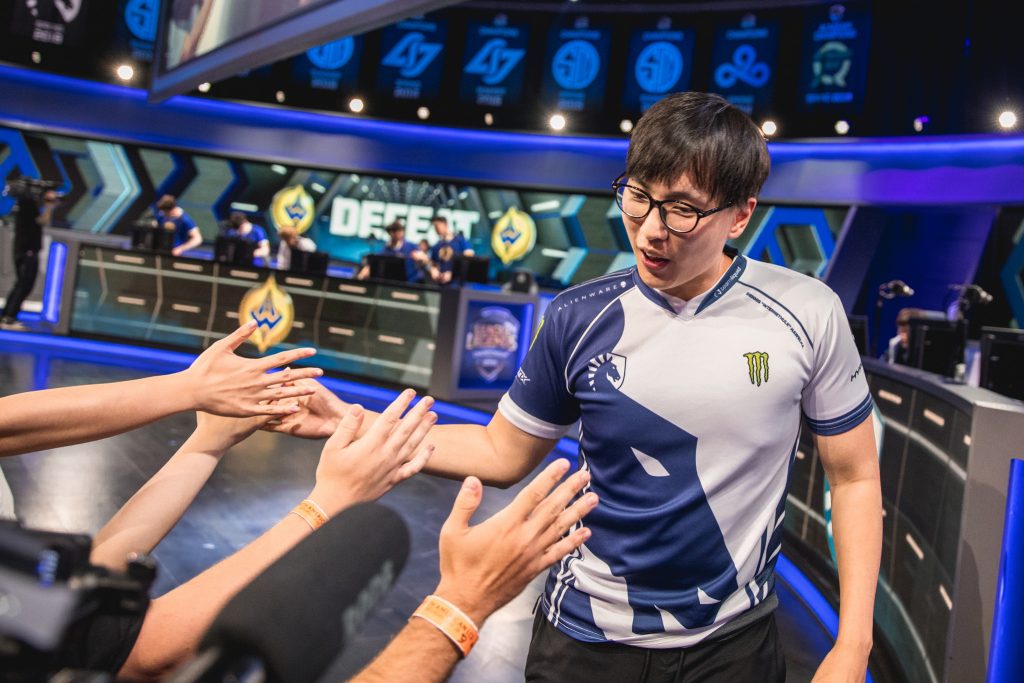 Team Liquid is one of three teams in the LCS to open the Spring Split undefeated.

We’re through the first week of the LCS 2019 Spring Split. Clutch Gaming, FlyQuest, and Team Liquid sit atop the standings, while 100 Thieves, Counter Logic Gaming, and Golden Guardians are still looking for their first wins. We take a look back at the match results, top storylines, best plays, and standout individual performances from the past week in North America.

Team Liquid is Still the Class of NA

Team Liquid have always been the team in North America willing to go for big additions, even after success, and 2019 was no different. Now we’ve finally gotten a look at the new team and the early results are great.

Counter Logic Gaming are not expected to be a powerhouse in 2019, but Team Liquid dominated them in their matchup. TL’s two new additions in Jensen and CoreJJ both did not die, and CoreJJ had an amazing 13 of 14 kill participation in the game. Heavy Rakan nerfs are coming next patch, but CoreJJ retired the champion in style.

The bigger of their two games was against Cloud 9. Jensen faced his former team for the first time and showed them what they’ll be missing. He had consistent mid priority over Nisqy’s Zoe and made Nisqy look silly by sidestepping some of his skillshots.

Impact had a rough time dealing with Licorice in the 1v1, as expected in a Sion vs Urgot matchup, but otherwise Team Liquid looked the better side throughout. Svenskeren helped them out by hard engaging from a poke composition that hadn’t gotten poke down yet, but TL were there to capitalize.

Clutch Gaming’s revamped lineup centered around Huni had an impressive debut over the weekend. They bested Echo Fox, the team they traded Solo, Apollo, and Hakuho for Huni, which has to feel great for Huni and management. Piglet and Vulcan looked good in their matchup against Apollo and Hakuho, while Huni terrorized Rush in his own jungle.

Things didn’t look as promising for CG against TSM, as they fell behind 5 kills early. Huni was solo killed by Broken Blade twice, and Akaadian was more impactful than Lira in the early game. Clutch Gaming were able to stall it out, though, and TSM didn’t make progress against the waveclear of Akali and Viktor. Eventually, Clutch Gaming baited Zven into a mistake, and Lira punished him with a perfectly timed Stopwatch. At equal gold, CG crushed every remaining team fight for the win.

FlyQuest played some weaker competition in OpTic Gaming and Golden Guardians but were still impressive in their opening games. The heavy skirmish meta has been great for their bot lane, as WildTurtle and JayJ are both aggressive players. V1per was put on Sion duty for his LCS debut but flashed his potential during his Irelia game against OpTic. Santorin and Pobelter combined for only 3 deaths in the 2 games, creating a strong middle of the map. We need to see some games against better competition, but FlyQuest is looking more like a playoff contender than a bottom of the standings team.

We had high expectations for both of these teams, but they looked out of sorts in Week 1. 100 Thieves had a rough start with games against TSM and Cloud 9, but it was surprising to see them drop both by a large margin. In the opener, Ssumday was outplayed throughout lane and ended up being solo killed in a Viktor vs Sion matchup. In failing to create any meaningful leads with Viktor, Urgot, Olaf, and Lucian, 100 Thieves lost fights against TSM’s better scaling composition and TSM controlled the game.

Huhi had a game to forget against Cloud 9. He opened the game by wasting his flash into Aatrox’s W Infernal Chains for First Blood. Then when a fight in top lane broke out, he teleported to one of his Nexus turrets instead of into the fight. Now that may have been a bug, but if so, the game should’ve been paused to figure it out. All-in-all, Huhi finished the game 1/4/1 on Ryze and didn’t complete his Seraph’s Embrace until 25 minutes into the game.

Golden Guardians were a popular sleeper pick, given they have a bunch of players who were once at the top of their roles. Unfortunately, the team cohesion is clearly not there yet. In their games against FlyQuest and Echo Fox, players looked lost and the team had no clear direction or win condition. Individually they looked okay, save for Olleh, but it seems like half the team is doing one thing while half the team is doing another. That points toward there being no clear voice on the team yet. They still have the talent to turn it around, but they have a lot to work on macro wise this week.

Expect to continue to see a lot of Ezreal in the coming weeks, as teams that picked him opened week 1 with a 5-2 record. He has always been around in competitive play for his ability to play safe and dish out a bunch of damage from afar, but his recent buffs have given him a new priority in pro play. While he wants to scale up with Tear of the Goddess in lane, he is still a great skirmisher because of his ability to land Q Mystic Shot from a distance and snipe people with the improved R Trueshot Barrage.

We saw a number of different builds come out in week 1, but it is clear that Iceborn Gauntlet is the preferred Sheen item over Trinity Force. WildTurtle and Piglet both picked up Hextech Gunblade in their wins, adding more burst to their arsenal when they were playing from ahead.

As we talked about in our LCS preview, we were going to find out a lot about Broken Blade in week 1 from laning against Ssumday and Huni back-to-back. Turns out Broken Blade is really good. He kept up in CS against Ssumday while playing Sion into Viktor, which is a feat of its own. Then when they transitioned bot lane in the mid game, he actually solo killed Ssumday. With that performance, we can put our worries about his tank play to rest.

While TSM didn’t beat Clutch Gaming, there’s no denying that Broken Blade beat Huni in lane. Maybe he’s just really good against Viktor? Broken Blade picked up two solo kills in top lane as Aatrox, a melee against Viktor. He also assisted in a 2-for-0 2v2 win with Akaadian’s Gragas on a countergank. Broken Blade held a 2.2k gold lead over Huni 13 minutes into the game. That’s unheard of stuff.

So against Huni and Ssumday, two of the Korean star top laners in the LCS, Broken Blade solo killed them 3 times in 2 games. That’s more solo kills in a weekend than a number of top laners will get all season. So yeah, Broken Blade was a good pickup.

Player of the Week: Damonte

Broken Blade was good, but Damonte ended up being better against TSM. Damonte was a rookie last split, and while he played fine in his debut, we had our concerns about a team contending with him in the most important role in the game. That prediction doesn’t look so good after this weekend, and especially after he held his own against Bjergsen and Team SoloMid.

Despite top lane crumbling, he out-CSed Bjergsen mid lane in an Akali vs Urgot matchup and didn’t allow TSM to crack open mid lane. If a lesser mid laner allowed TSM to pressure out mid, Clutch Gaming would have collapsed before they were able to make their comeback.

Several assassinations in fights later, Damonte ended the game against TSM with a 6/0/3 K/D/A. That’s on top of his 5/0/5 performance against Echo Fox the day before. So an 11/0/8 performance for the week on a 2-0 team while playing melee champions? That’s our player of the week in North America.