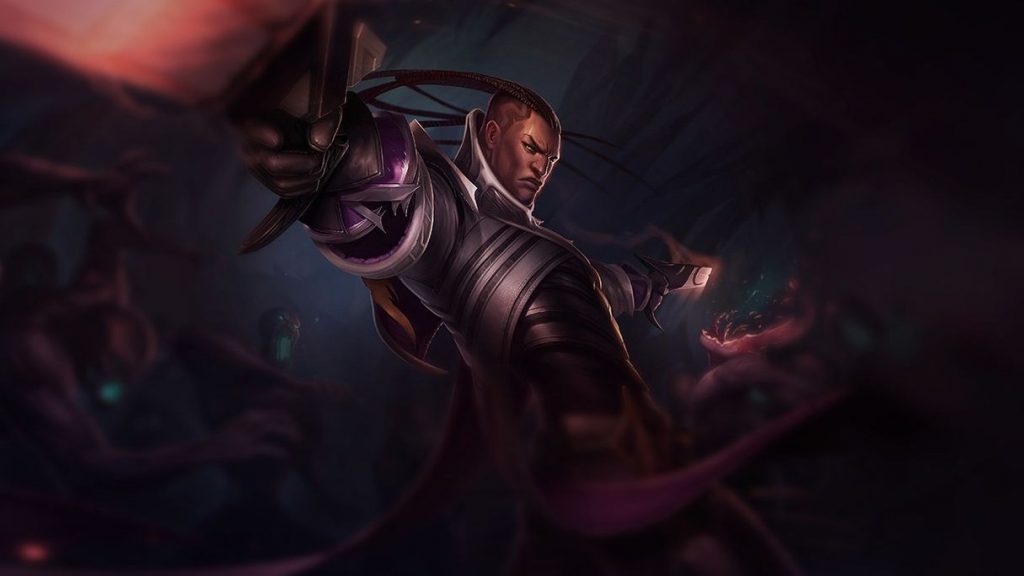 Lucian is one of four champions to have a 100% pick/ban rate through the first two weeks of LCK action.

Week 2 in the 2019 LCK Spring Split is done, and we’re starting to see some separation between the teams. Griffin and SANDBOX Gaming sit atop the standings, while Jin Air Green Wings are the only team yet to pick up a match win. We take a look back at the match results, top storylines, best plays, and standout individual performances from the past week in Korea.

Kingzone DragonX Bounce Back With 2-0 Week

35 minutes into Game 1 against KT Rolster, it looked like Kingzone DragonX were in for another rough week. KZ watched their early 5k gold lead evaporate in the mid game, losing fight after fight until KT finally caught up and surpassed them in gold. KT finished off both KZ Nexus turrets, but KZ were able to push them off the Nexus and regroup.

Deft popped off in the next fight, melting the entire KT frontline with his Ashe Hurricane damage, and miraculously KZ turned the game back around and found the win. Game 2 against KT saw KZ get the same early game lead, but with no problems closing it out.

Their series against Afreeca Freecs largely went the same way, except the stomp was Game 1 and the early lead-into mid throw-into late game win was Game 2.

With each passing match, the loss against SANDBOX Gaming looks better and better, and there is no shame in losing to Griffin in their current form. Kingzone DragonX don’t look like a great team, but they are shaping up better than some of the presumed playoff teams like Afreeca Freecs, KT Rolster, and Gen.G.

Deft and TusiN have been carrying the load for the team, but Rascal had a great weekend as well. He was able to pick up a solo kill on Smeb and had more impact than Kiin in the Afreeca series. Teams will certainly look to force him off the Urgot he played in all four games this week, but things are looking much more promising for KZ after week 2.

Tarzan died for the first time this weekend. Disgraceful. Other than that, Griffin continued to steamroll their way through the LCK with another 4-0 game, 2-0 match week. They did find themselves down 7.6k at 29 minutes to Hanwha Life Esports but casually picked up a 5 kills to 1 ace to turn the game around.

Chovy and Viper are just incredible carries and we think Tarzan has the crown of best player in the world right now. Griffin will get their biggest tests of the season next week, facing SKT Telecom T1 and the undefeated SANDBOX Gaming.

Speaking of SANDBOX Gaming, who would have thought they’d be undefeated through week 2 of the LCK Spring Split. They didn’t look particularly good in falling to Gen.G in the KeSPA Cup but have only dropped one game in their perfect 4-0 match start. That game was to SKT Telecom T1, who stomped them in the first game of the series. Summit went 0/5/0 on Ryze and nobody on SANDBOX dealt more than 10k damage to champions in the 33-minute game.

As they’ve done all season, SANDBOX just fought their way out of the deficit. Ghost and Joker won 2v2s against Teddy and Mata bot in Game 2 and Summit was able to solo kill Khan in top lane. SANDBOX continued to force fight after fight, utilizing the crazy skirmish power of their Akali/Jax/Aatrox/Draven/Thresh composition.

Game 3 against SKT was another route for SB. They held a 6.4k gold lead by 15 minutes and never looked back, racking up a whopping 17.4k gold when they finished the Nexus at 30 minutes. SKT picked up Gangplank, who has been seen as a good pick into Akali and flexed Faker to top lane Urgot duty. This might be the last we see of that, as Faker had an uncharacteristic 0 kill participation in the game with a 0/3/0 scoreline.

These are the four largest champion priorities so far in the LCK. Cassiopeia remains the biggest point of contention, as she has been banned 43 of the 45 games. In addition to being incredibly strong as a champion, the other point of power for Cassiopeia is that she can be flexed into any of the three lanes in the current meta. Only Jin Air Green Wings’ Grace and DAMWON Gaming’s Nuclear have been allowed to play her so far.

Rakan and Urgot have the highest win rates of the 4, both sitting at just over 63%. Those Urgot numbers were helped by Rascal’s 4-0 performance on him in the past weekend, but he is having success on all teams so far in 2019. Rakan is getting crushed by an engage speed nerf in the next patch, so his priority will fall back down. Lucian remains a high priority as crit champions continue to be a thing of the past.

All three of these teams had playoff aspirations, but have gotten off to a rocky start, sitting at 1-3 match scores and in 7th, 8th, and 9th place in the LCK. What’s gone wrong?

You know something is wrong with Gen.G when they drop a game to Jin Air Green Wings. They ended up winning the series as expected, but that’s a team that everyone in the LCK expects to 2-0. The match loss to Afreeca Freecs was more troubling. AF have been using Spirit on mages bot lane while Kiin has been playing AD carries in solo lanes, leaving a huge opening for opposing bot laners to take advantage. That didn’t happen in the series. Ruler finished with meager 1/2/1 and 1/2/4 K/D/As in the two losses, while Life was a non-factor on Alistar. They need their bot lane to carry them like we’ve seen from Deft and TusiN on Kingzone DragonX.

KT Rolster look like an absolute mess. Going into the season they had our vote for the best top half of the map in the LCK, with Smeb, Score, and Bdd. That has not translated in games. Smeb has been getting solo killed in lane and has generally been so off his game that he’s been subbed out for Kingen in multiple games. Spirit is not having his usual impact in jungle, Bdd hasn’t been able to dominate mid lane with a resurgence of LCK talent, and suddenly the KT Rolster strengths disappear.

Afreeca beat Gen.G this week, but have the worst game record (2-7) of the three. They’ve certainly tried to be innovative in the meta, constantly putting Kiin on Lucian and other AD carries while flexing Spirit around on mages. That might keep them more competitive for now, but it’s hard to see how the team grows when players are playing non-meta off-roles this early into the season. We wouldn’t be surprised to see Afreeca on the market for a new ADC, as they clearly have no confidence in Aiming at the moment.

Player of the Week: Chovy

Last week it was Tarzan who didn’t die, but Chovy was the star for Griffin this week. We love watching him on the Akali that he played three times this week, but his best performance was on Zoe in his final game. Chovy went 11/0/5 on that Zoe and almost doubled the amount of damage to champions of everyone else in the game. It brought his total K/D/A on the week to a sterling 24/1/20.

For the season, Chovy is rocking a 33.60 KDA, easily tops in the league over the 11.15 KDA by his teammate Viper. As the season stands, he is more likely to go deathless in a game than die even once. All of the Griffin player stats look ridiculous given how dominant they’ve been, but Chovy stood out in week 2.