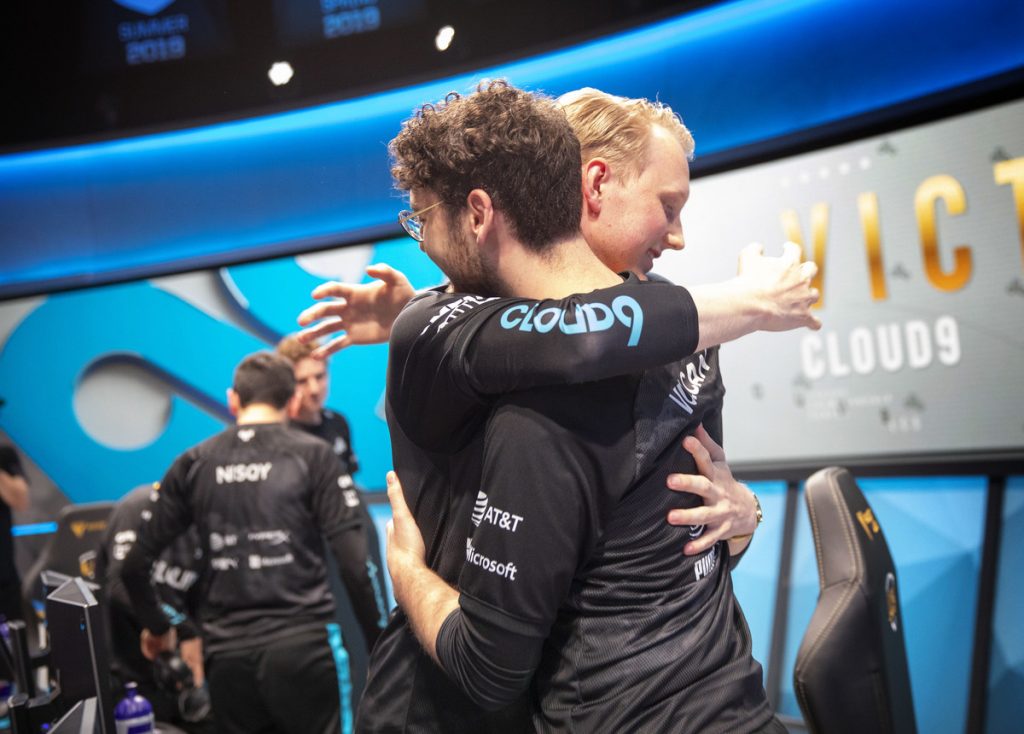 Another week, another 2-0 for the best team in North America. (Photo courtesy Colin Young-Wolff - Riot Games)

The second week of the League of Legends Championship (LCS) 2020 Summer Split has concluded. With so many lopsided victories at the top of the standings, a clear pecking order has started to establish itself. That includes Counter Logic Gaming, who have already matched their Spring win total of three. We take a look at where things stand in the LCS by looking at the top storylines so far in North America.

BIG GAPS AT THE TOP

After two weeks, the Cloud9 tier seems very much the same. After easily dispatching Spring Finalist FlyQuest in week one, C9 took on Evil Geniuses, the only team to take a playoff game off them. The game was not close. C9 opened a 1k gold lead by four minutes, grew it to 3k by 10 minutes, and got as high as 15k up by the end of the 25 minute stomp. The win over Golden Guardians was less dominant, but there are still no serious challengers to C9’s top spot.

Team Liquid looked like they might be the team to give C9 trouble. Though they finished in ninth place last split, their 3-0 start to the season had them looking much more like the team that won four consecutive LCS titles before the nosedive. Edward “Tactical” Ra fit in like a glove, working as the mechanical tool for Jo “CoreJJ” Yong-in to wield. TL were firing on all cylinders and were looking to be an explosive matchup for C9 in week three.

But before they made it to next week, TL played the same EG team that C9 handily crushed. And EG did the same to TL. Colin “Kumo” Zhao’s Volibear crushed Jung “Impact” Eon-yeong’s Mordekaiser, TL had no answer for Daniele “Jiizuke” di Mauro’s Twisted Fate, and EG closed out TL with a clean 1-3-1 split. TL were so behind that they couldn’t even take a fight as their Nexus fell at 28 minutes.

FlyQuest still deserve to be in the conversation with Evil Geniuses in the second tier, but there is now evidence of a pretty good tier gap between them and the next contenders. TSM have once again started a season with dominant victories and meek defeats, 100 Thieves have stumbled to a 1-3 start, and CLG still have to prove that Spring was a fluke.

TL will have a chance to prove themselves against C9 next week and label the EG game a fluke. But their loss against Evil Geniuses proved they aren’t quite back as one of the elite teams in the LCS just yet.

FlyQuest picked up a 2-0 week to keep pace behind C9 in the LCS. However, they did it without a familiar face. FlyQuest promoted Brandon “Mash” Phan in place of Jason “WildTurtle” Tran for their week two games.

As @DontMashMe has been showing UP lately, he will have the chance to showcase his greatness in our #LCS games this weekend!

Time for @WildTurtle to lead our Academy squad and show @TSM Academy who's boss! Tune in to https://t.co/y1soqkJ6cN at 3PM PDT! #FLYWIN #SeaQuest 🌊 pic.twitter.com/9T9sq3eLja

This comes as a surprise because nothing seemed to be wrong with WildTurtle’s play. He has been a mainstay in FlyQuest’s starting lineup since he joined the team. In fact, this was the first time FlyQuest started a non-WildTurtle ADC on their LCS team since the Spring of 2017.

Mash is a familiar name for long-time LCS fans, though it’s been awhile since he’s been in the top league. Mash debuted in the LCS with Good Game University, later known as Team Coast, way back in the Summer of 2013. He later played with Phoenix1 and Echo Fox.

It’s not exactly a surprise that Mash would have good numbers in a pair of wins, but what he did was still impressive. He and Lee “IgNar” Dong-geun picked up 2v2 kills on Yiliang “Doublelift” Peng and Vincent “Biofrost” Wang against TSM, leading to an 11/1/11 performance on Aphelios. Mash led all champions with 27k damage dealt in the game. Mash followed that up with a 2/1/5 Ezreal game against Dignitas.

That’s not to say numbers in the game will decide who starts going forward. WildTurtle went 3/2/5 in the loss to C9 before going 5/0/7 in a win over Immortals. In FlyQuest’s announcement of the lineup change, they mentioned that Mash’s recent performance earned a chance on the stage. This is still probably WildTurtle’s job, but FlyQuest get the added benefit of knowing that Mash is ready and capable to fill in whenever he’s needed. Mash also showcased value as a potential trade candidate and as someone who should be on the radar as a possible starter.

Counter Logic Gaming had one of their worst splits in LCS history during the Spring. Their signing of marquee free agent Lee “Crown” Min-ho was a total flop. Crown’s play was so bad that CLG was forced to bench him after four weeks to bring Eugene “Pobelter” Park back from the coaching ranks. Unfortunately, CLG didn’t do much better with Pobelter, finishing Spring 3-15 and in last place.

After this terrible split, CLG made a grand total of zero roster changes. In some cases, that could be considered giving up on the season. But in this case, maybe it was a sign of confidence in a group that just needed more time to develop together.

With this win we match our wins from Spring Split. 😱 pic.twitter.com/ZEUCo7n6HJ

In either case, that decision to keep their roster together has paid off to begin the Summer Split. With two more victories in week two, CLG is now 3-1 and tied for second in the LCS. There are still seven weeks to go for CLG to prove that they are playoff team, but for now they have already tied their Spring win total.

CLG opened week two with a victory over Golden Guardians. Raymond “Wiggily” Griffin had his most impactful game this season, going 0/0/13 on Trundle for 13 of 14 kill participation. Trevor “Stixxay” Hayes and Andy “Smoothie” Ta also won their bot lane matchup hard, allowing CLG to pick up a decisive win in 30 minutes.

CLG then took a more difficult win over Dignitas to close the week. Most of their lanes went even, but Kim “Ruin” Hyeong-min showed why CLG originally imported the top laner. His Volibear gave Omran “V1per” Shoura’s Aatrox fits, eventually finishing 2/0/5 as the meat shield for Stixxay’s Aphelios. CLG took the win 13 kills to 8 in 40 minutes. 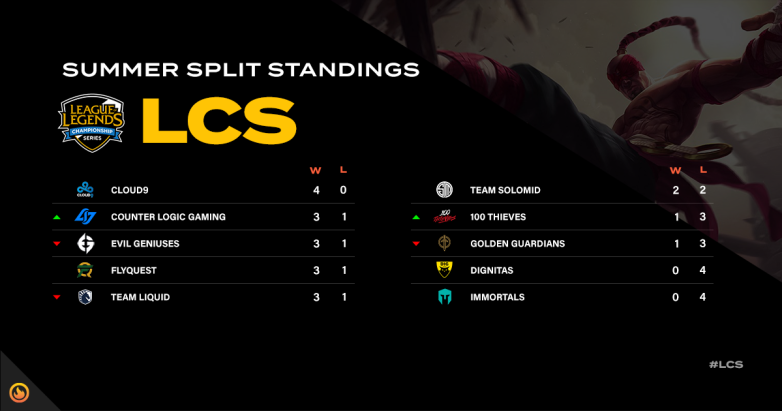 Nobody can touch Cloud9 at the top of the standings, but there is a good battle for second place. CLG, Evil Geniuses, FlyQuest, and Team Liquid are all vying to get that first-round bye in the playoffs.

This matchup was looking a lot more exciting until Evil Geniuses handed it to Team Liquid to close week two. Even still, Team Liquid have the individual skill to make it interesting against Cloud9. Tactical and CoreJJ look to have what it takes to lane against Jesper “Zven” Svenningsen and Philippe “Vulcan” Laflamme, and Nicolaj “Jensen” Jensen won’t be scared of  Yasin “Nisqy” Dinçer. But can Impact hold up against Eric “Licorice” Ritchie?

Evil Geniuses may have lost handily to Cloud9, but their route of Team Liquid has earned them consideration as the second best team in North America. TSM have looked stronger with Doublelift in the lineup so far, but their inconsistency — especially in the draft — still plagues them. TSM will need Mingyi “Spica” Lu to keep pace with old TSM jungler Dennis “Svenskeren” Johnsen for TSM to pull off the upset.