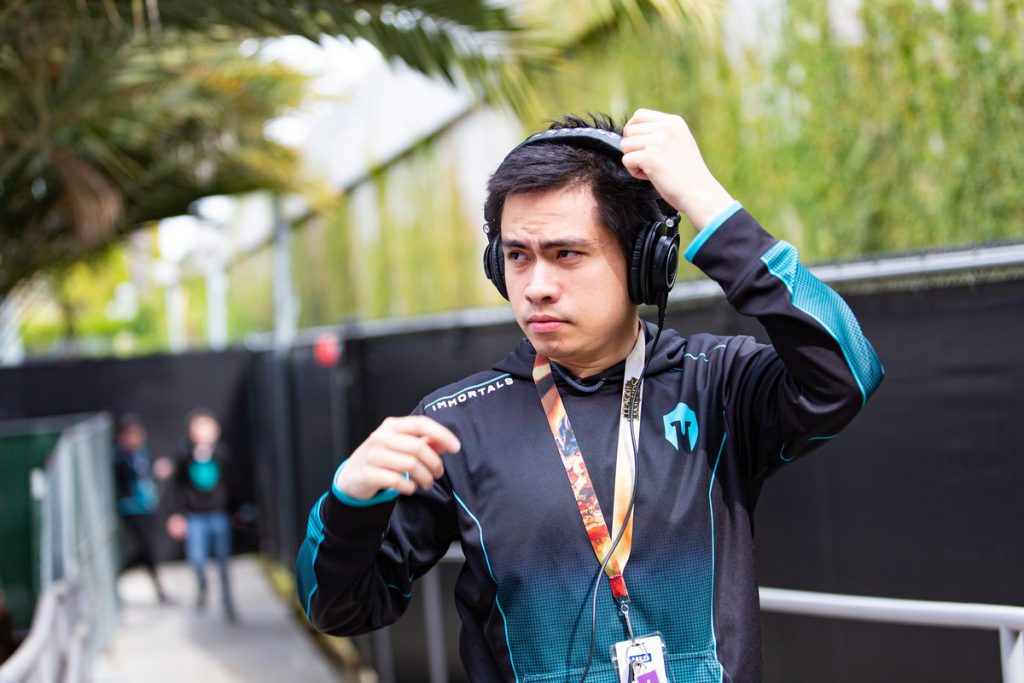 The third week of the League of Legends Championship (LCS) 2020 Summer Split has concluded. After parting ways with their head coach and general manager, Immortals swapped in their academy roster and picked up their first win of the season. Meanwhile, 100T has benched one of their most popular players after a slow start. We take a look at where things stand in the LCS by looking at the top storylines so far in North America.

After finishing in eighth place in the Spring Split, though they tied in record for the final playoff spot, Immortals looked to enter Summer Split in no-man’s-land. They were unlikely to be good enough to compete for an LCS title or a World Championship berth, but they also had a roster full of veterans that was built to win now.

They didn’t get them. IMT lost their first four games of the season, often in non-competitive games. Immortals responded by parting ways with Head Coach Thomas “Zaboutine” Si-Hassen and General Manager Keaton “Keaton” Cryer. Then, they announced they would use their academy roster, headlined by Xmithie, for week three.

For this match, it has to go to @insanitylol in his LCS debut.
He had:
0 Deaths
10 KDA
63% KP
and was the perfect bait for overextending opponents.#ToyotaSoCal #IMTWIN pic.twitter.com/nt4Ddx9bsb

This plan did work, at least to get Immortals their first win of the season. The Immortals “academy squad” — which featured LCS veterans Xmithie, Hakuho, Kieran “Allorim” Logue, and Apollo “Apollo” Price — took care of Golden Guardians in their first game of the week. Xmithie was good in his return, out-jungling GGS’ star player Can “Closer” Çelik. Filling in for maligned import Jérémy “Eika” Valdenaire, David “Insanity” Challe played well in his LCS debut, going 2/0/8 on Orianna. The long-time duo Apollo and Hakuho combined to go 8/2/16 as well. A four-for-zero team fight at 32 minutes sealed the 16 kill to 5 win in 35 minutes.

Unfortunately for Immortals, they ran into the Cloud9 buzz-saw in game two of the week. Immortals were outclassed from the start, but that’s how it’s gone for any North American team playing Cloud9. It’s impossible to draw any conclusions from that game, except to say that this IMT five-man roster is not the second coming of Cloud9.

Throwing out the C9 result, the IMT squad has probably earned at least another week on the main stage. They’ll have tough tests against Team Liquid and Evil Geniuses in week four.

Though Dignitas did not swap out their entire starting roster, they were another 0-4 team entering week three to make a change. They subbed out the struggling Omran “V1per” Shoura for Samson “Lourlo” Jackson in top lane. Touting a 10-man roster full of LCS experience, it should come as no surprise that Dignitas will be quick to make moves as the team continues to struggle.

That said, it wouldn’t be surprising if more changes are on the way after another poor week. Their disastrous ending to their opener against Team Liquid was so bad, it led to the following rant by shoutcaster David “Phreak” Turley in postgame:

Somehow, Dignitas decided to neither contest Team Liquid’s Elder Drake attempt nor guard their own base. Jung “Impact” Eon-yeong’s Jayce happily knocked down both Nexus turrets while the rest of his team teleported and crashed in. It was easily one of the most confusing sequences in a region that has been mocked for poor play.

Dignitas followed that up by losing a single team fight at even gold to Evil Geniuses and then rolling over. EG took a fight four-to-zero, picked up Baron, knocked down all of Dignitas’ inhibitors, and won the game. In those last six minutes of game time, EG only picked up three kills on Dignitas, while conceding two kills of their own. Dignitas’ passivity was on full display for their sixth loss of the season.

Now with Immortals picking up a win with their academy roster, Dignitas is the last winless team in the league at 0-6. The team that rosters 10 LCS caliber players cannot win a single game in the league, while simultaneously declining to use their academy team as a training grounds for rookie players. Their ADC Johnson “Johnsun” Nguyen still looks like a building piece for the future, but it’s hard to see the positives for Dignitas for the rest of this season. They won’t be competing for a championship or developing internal talent.

Dignitas will hope to snap their winless streak against 100 Thieves and Cloud9 in week four.

100 Thieves dropped two more games in week three, dropping their overall record to 1-5. This comes after a third place regular season finish in the Spring. While 100T had a rough schedule to start the year, they can’t use that as an excuse after dropping games to Counter Logic Gaming and TSM in week three.

Maybe it's a blessing

Those losses piling up have obviously had an effect on the team, as jungler William “Meteos” Hartman took to Twitter to announce that he has been benched for next week. In a pair of since deleted tweets, Meteos wrote that none of the players on the team knew about or agreed with the benching. Meteos then went on to tag Head Coach Tony “Zikz” Gray, General Manager Christopher “PapaSmithy” Smith, and Strategic Coach Joseph “JungleJuice” Jang as the decision makers.

This situation is eerily similar to 2018 Summer, Meteos’ last stint with 100 Thieves. 100T replaced Meteos with Andy “AnDa” Hoang after three weeks, at exactly the same point in the season.

It’s tough to evaluate a supportive jungler like Meteos when the rest of the team isn’t doing well, but 100 Thieves clearly needed a change somewhere to shake things up. 100T Academy jungler Juan “Contractz” Garcia will step into the starting role in place of Meteos. Contractz had plenty of LCS experience with Cloud9 and Golden Guardians before joining 100T. He should be a good fit in the more farm and carry oriented jungle meta we’ve seen developing.

While only Meteos has spoken out so far, that doesn’t mean there won’t be more changes for 100 Thieves. William “Stunt” Chen and Tommy “Ryoma” Le have been struggling, though Ryoma had his best game of the split in his matchup with Søren “Bjergsen” Bjerg. We’ll see what lineup 100T put out when they open against Golden Guardians in week four. They’ll then take on Dignitas in their second game of the week. 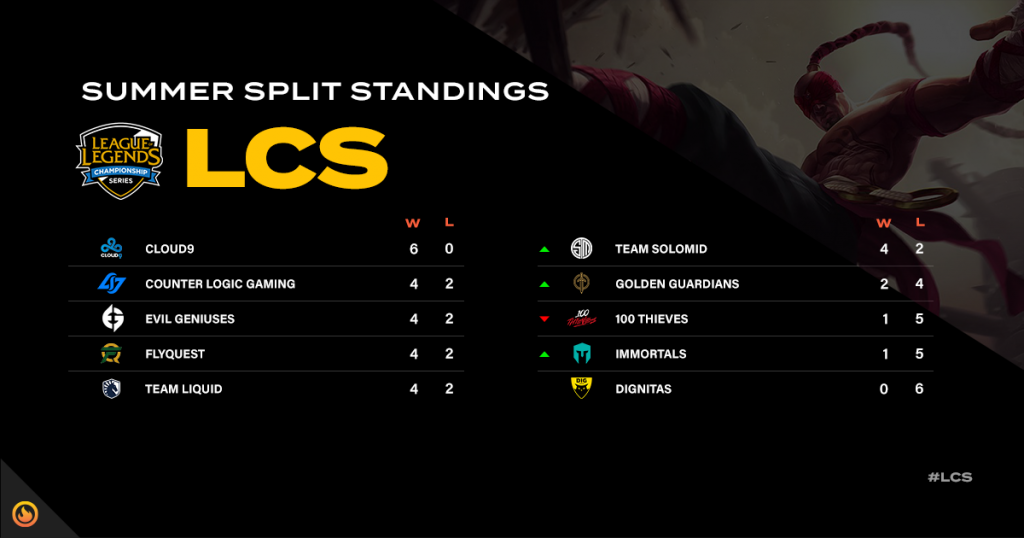 It’s still Cloud9, a large tier gap, and then everyone else in the LCS. There are five teams tied at 4-2 after three weeks, including TSM after their first 2-0 week of the season.

Dignitas are the only remaining winless team in the league after Immortals picked up their first win over Golden Guardians. Dignitas, Immortals, and now 100 Thieves have all made a roster change so far. Will Golden Guardians be next?

This will be another chance for Immortals to see what they have against a team that isn’t Cloud9. Xmithie gets another revenge matchup against Mads “Broxah” Brock-Pederson and his former teammates. Insanity and Allorim will get to test themselves against established stars Impact and Nicolaj “Jensen” Jensen. Apollo and Hakuho also have enough experience and chemistry together that they may make bot lane more difficult for Edward “Tactical” Ra than expected.

It’s been awhile since this matchup has meant something, but both Counter Logic Gaming and TSM are 4-2 to open the season. Once the premier rivalry in the LCS, both teams are trying to pull themselves back up to the league’s elite. TSM certainly have more star power in their lineup, but CLG have already exceeded their Spring win total and have been touted as a dark horse candidate by other LCS teams. This is also a matchup of the supports that were exchanged for each other in the off-season — Vincent “Biofrost” Wang and Andy “Smoothie” Ta.