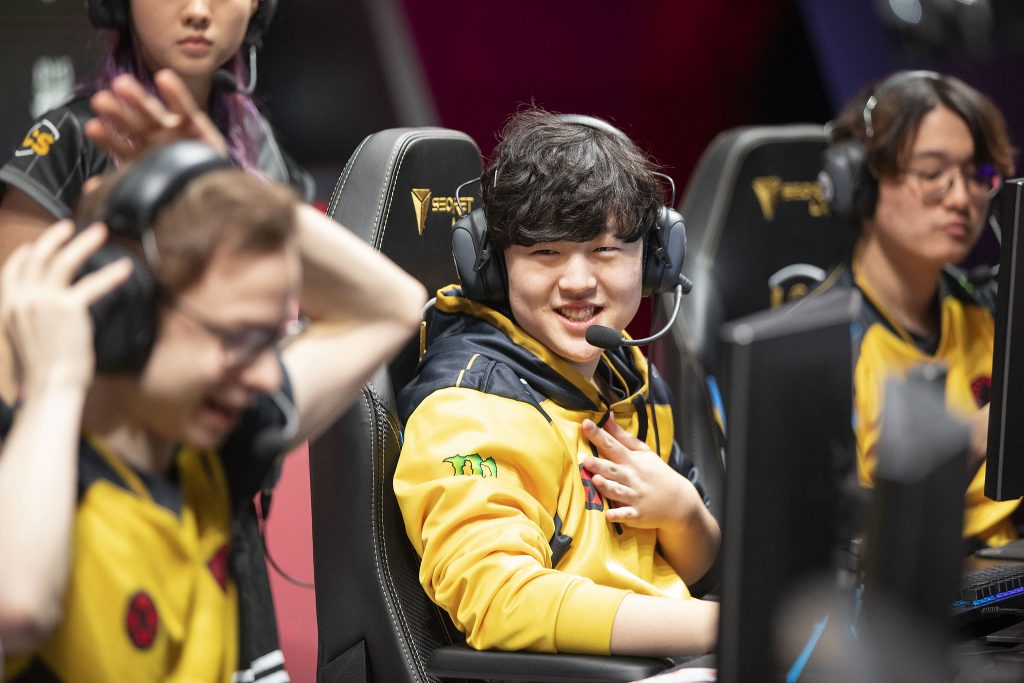 The ninth and final week of the League of Legends Championship (LCS) 2020 Summer Split has concluded. Team Liquid and Cloud9 took care of business to lock up the two playoff byes, while Dignitas earned themselves the final playoff spot in a tiebreaker win over Counter Logic Gaming. We take a look at where things stand in the LCS by looking at the top storylines so far in North America.

With eight teams making the playoffs in the LCS, all the top half of the league had locked up playoff spots well before the end of the season. Instead, Team Liquid, Cloud9, and TSM were all in the running for the top two spots in the league. Unlike Spring, the top two seeds didn’t just get favorable matchups to open the playoffs. This time, the top two seeds earned a first-round bye, advancing them two round two of the upper bracket immediately.

Team Liquid took care of business, locking up the first overall seed with wins over Immortals and TSM. In an ordinary split, Immortals wouldn’t have been playing for anything in their match against TL, but IMT were not technically eliminated from the playoffs at that point. It didn’t matter, as TL won comfortably. Nicolaj “Jensen” Jensen played the first Akali game of the split and didn’t disappoint, going 9/0/8 to earn game MVP in the win. TL won 21 kills to 6 in 45 minutes.

The win over Immortals already guaranteed TL the first seed, but they still took care of business against TSM in a nice playoff tune-up. The game was dead-even for the first 28 minutes, but a series of strong vision denial plays by TL set up an uncontested Baron take to put themselves in the lead. With the buff, TL took a pair of turrets and used the gold infusion to take over the game. TSM secured Ocean Soul afterwards, but they paid for it. TL picked up four kills in the ensuing fight, enough for them to immediately end the game. TL won nine kills to three in 35 minutes, denying TSM a tiebreaker against Cloud9 for second.

Cloud9 are grateful to Team Liquid for their win over TSM, but they first had to take care of their own business. They opened with a very shaky win over Dignitas on Friday, needing a Baron throw by Dignitas to take the win. Dignitas led in gold for most of the game, but Kim “Fenix” Jae-hun’s mis-pathing got Johnson “Johnsun” Nguyen killed and gave C9 enough of a numbers advantage to win the game. C9 won despite trailing 13 kills to 12 in 41 minutes.

C9’s second win was more reminiscent of their dominant days. Playing Counter Logic Gaming’s sub squad, C9 dominated throughout. Yasin “Nisqy” Dinçer was comfortable on Zoe, going 6/0/8 to lead the team to a 17 kill to 4 victory in 27 minutes.

Cloud9 and Team Liquid have earned their byes, but there are still question marks surrounding both teams. With relatively weak opponents in the LCS, do Team Liquid still have another gear or level they can reach to close out the title? Are Cloud9 the team that dominated the Spring and started Summer 9-0, or the team that finished Summer 4-5?

Team Liquid will get their choice of first round opponent. They will pick the winner of FlyQuest vs. Evil Geniuses or TSM vs. Golden Guardians. Cloud9 will face the other winner.

Only Team Liquid, Cloud9, and TSM had a shot at finishing as regular season champions, but FlyQuest still had a chance at forcing themselves into the top two. Two wins by Cloud9 made that impossible, but FlyQuest didn’t let that stop them from moving up the ladder. With TSM’s loss to Team Liquid, FlyQuest’s two wins jumped them up to the third seed in the standings. That may seem insignificant, but it means they will be facing Evil Geniuses instead of Golden Guardians in round one.

GGWP @Immortals! Praise be to the #SeaQuest Fish Gods – Sea y'all in playoffs! #FLYWIN #ShowcaseGreatness pic.twitter.com/vTkNQbYbcB

FlyQuest opened with a win over Counter Logic Gaming. FlyQuest led from the minute Tristan “PowerOfEvil” Schrage picked up First Blood on Jean-Sébastien “Tuesday” Thery to get the action started. Lee “IgNar” Dong-geun made the most of Pyke’s passive, picking up seven kills to tie with Colin “Solo” Earnest’s Mordekaiser (7/1/8) for the team lead. FlyQuest won 22 kills to 8 in 38 minutes.

FlyQuest followed that up by beating the other team to miss out on the LCS playoffs. With Immortals needing a win to avoid elimination, FlyQuest showed no mercy. Despite a back-and-forth early to mid game, FlyQuest found a big team fight win around Cloud Soul to bust the game open. PowerOfEvil’s Orianna (4/0/11) and Jason “WildTurtle” Tran’s Aphelios (5/0/9) led the way in the 15 kill to 6 win in 36 minutes.

Though they were wins over the two non-playoff teams, FlyQuest have now run their winning streak to six games, longest in the league heading into playoffs. Once again, FlyQuest seem to be peaking at the right time. The team has also lost only two games with WildTurtle in their starting lineup, both to Cloud9. With no controversy in the top lane this playoffs, FlyQuest should also have the advantage of devoting 100% of their scrim time to the same five players. They should be viewed as one of the favorites heading into the playoffs.

With eight out of ten teams qualifying for the playoffs, there is bound to be drama at the bottom of the standings in the final week. That was the case here, as Dignitas and Immortals both wanted to chase down Counter Logic Gaming for the final playoff spot. CLG had a one game lead on both heading into week nine.

Dignitas and Immortals both lost their first games, setting CLG up with the opportunity to clinch their playoff spot against FlyQuest. Instead of going for it with the roster that got them there, CLG subbed out Raymond “Wiggily” Griffin for Kristopher “Fragas” Myhal, and more surprisingly, Eugene “Pobelter” Park for Tuesday. Those moves did not pay off. Tuesday had a respectable 4/3/2 score on Syndra, but Fragas’ Sett was victimized early and often to the tune of a 1/7/3 K/D/A.

CLG then had a second opportunity to clinch, playing against Cloud9. CLG stuck with their subs, but CLG once again got crushed. This time it was Tuesday scoring poorly (0/4/3), but he was hardly alone. CLG’s bot lane went 0/8/4, CLG took only one turret, and C9 won 17 kills to 4 in less than 27 minutes.

Immortals lost against both Team Liquid and FlyQuest to be eliminated, but Dignitas’ win over 100 Thieves put them in a position to play a tiebreaker for the final playoff spot. Dignitas beat 100T despite being down 10 kills to 8 when it ended. Johnsun was his typical dominant self, going 5/0/2 on Ezreal to will Dignitas to victory. Joshua “Dardoch” Hartnett was the secondary carry, going 3/2/0 on Nidalee.

CLG went back to Pobelter for the tiebreaker game, but it made no difference. His entire team collapsed around him as Dignitas threatened to go into the playoffs courtesy of a perfect game. CLG ruined that by trading a drake and a turret for a turret of their own, and though they pulled off a pair of picks late, they never really stood a chance. Dignitas built a composition around Dardoch’s Olaf, picking Shen and Soraka for support. Dardoch delivered, going 7/0/6 to propel Dignitas in the playoffs.

Though nobody is giving out an award for eighth place, it is a victory for the coaching staff after a 0-8 start to the Summer. Dignitas turned to Dardoch and Kim “Fenix” Jae-hun over Matthew “Akaadian” Higginbotham and Henrik “Froggen” Hansen, sparking the team to a 6-5 finish. The staff also stuck by top laner Omran “V1per” Shoura, despite his obvious struggles. V1per played a strong 4/2/8 Shen in the win over CLG.

For CLG, the final weekend was a disaster. They had a chance to make the playoffs, but they went to two young players at critical roles over the veterans. Neither played particularly well in the losses, bringing Pobelter back for the tiebreaker. It’s fine if CLG were more interested in checking out their young players than trying to pull off a miracle run, but it doesn’t make sense to then turn back to Pobelter in the final game. Why did the staff want to win that game, but not the others? In that case, did they think that Tuesday gave them a better chance to win than Pobelter in the first two games?

Pobelter didn’t have many options when he joined CLG mid-season, but you don’t engender goodwill to veterans by subbing them out in the biggest games of the season. Pobelter remains signed through 2021. It wouldn’t be surprising to see CLG move on from Kim “Ruin” Hyeong-min, who after a strong debut split, has been a disappointment as an import. The rest of the roster is signed through 2021, though more changes could be made. 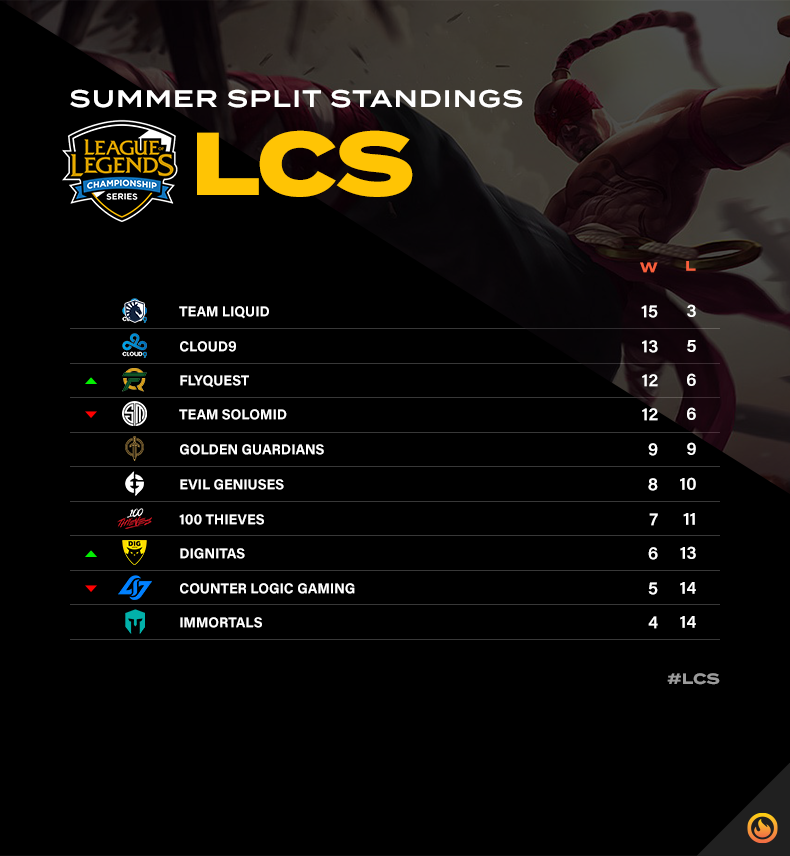 Team Liquid secured the first seed, joined by Cloud9 with a first-round bye. FlyQuest, TSM, Golden Guardians, and Evil Geniuses will all play in the first round of the upper bracket.

100 Thieves and Dignitas made the final two playoff spots. They will start in the lower bracket, awaiting the losers of round one in the upper bracket. Counter Logic Gaming and Immortals have begun their off-season.

The eight team LCS Summer playoffs is a double elimination tournament that will produce the three North American representatives to the World Championship. The tournament begins on Thursday, August 13th at 1 p.m. PST as fourth seeded TSM takes on fifth seeded Golden Guardians.