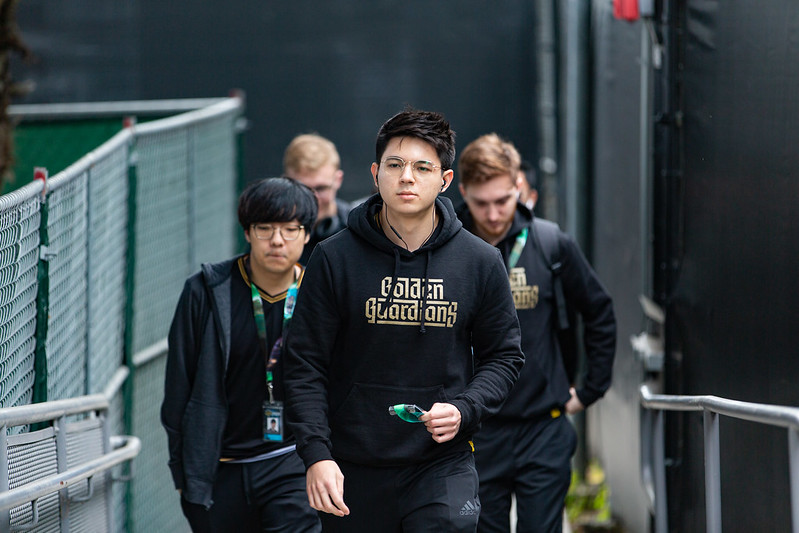 Golden Guardians played their way into a three-way tie for sixth with a 2-0 week. (Photo courtesy Oshin Tudayan - Riot Games)

The ninth and final week of the League of Legends Championship (LCS) 2020 Spring Split has concluded. However, ties for both second and sixth place in the league will force an extra day of tiebreaker matches on Monday, March 30th. 100 Thieves, Evil Geniuses, and FlyQuest will all fight for second place. Meanwhile, Dignitas, Golden Guardians, and Immortals will play for the sixth and final playoff spot. We take a look at where things stand in the LCS by looking at the top storylines so far in North America.

After nine weeks of play, there still is no separation between the teams behind Cloud9. 100 Thieves, Evil Geniuses, and FlyQuest all finished 10-8 to force two tiebreaker matches for second place. Because EG had the best head-to-head record between the three, they will get to play the winner of 100 Thieves and FlyQuest.

With @FlyQuest's victory, @TSM, @100Thieves, and @EvilGeniuses all locked spots in the 2020 #LCS Spring Playoffs! pic.twitter.com/aGEGaE34BV

It was FlyQuest who kicked off the weekend by first securing playoff spots for all three of the teams. FlyQuest beat Team Liquid in their first match, guaranteeing that TL could not reach nine wins on the season. They did so by making Jung “Impact” Eon-yeong’s Renekton a non-factor and then focusing their attention on Peter “Doublelift” Peng’s Kalista. FlyQuest beat TL 12 kills to 6 in 35 minutes.

FlyQuest then dropped their second game of the week to Golden Guardians, losing their shot at finishing alone in second place. Interestingly, they subbed Omran “V1per” Shoura back in for Colin “Solo” Earnest in this game. Solo had played in the previous three games for FlyQuest and was playing well. Given V1per’s 0/3/1 Renekton performance in the loss, Solo looks to have earned the starting spot heading into playoffs.

100 Thieves ended the year on a three game winning streak to move their way up to third. They started the week by beating TSM. TSM had a strong position in mid game, but a botched team fight and 100 Thieves’ superior scaling won the day. The team fight combination of Ornn, Viktor, and Aphelios proved too much for TSM’s disjointed composition, no matter how fed Søren “Bjergsen” Bjerg got on Azir. 100T then took care of business against CLG, winning 14 kills to 13 in 30 minutes. Their 7-2 record in the second half of the season was second only to Cloud9’s 8-1 run.

The Master Plan moves into the next phase… (you're welcome @TeamLiquidLoL @GoldenGuardians @dignitas) 😈 #LIVEEVIL pic.twitter.com/NAiodsSr4s

Still, EG shook off that loss to take down Immortals in their final game of the regular season. Daniele “Jiizuke” di Mauro’s Ryze (6/0/7) and Bae “Bang” Jun-sik’s Aphelios (5/1/8) popped off, highlighting EG’s potential when their carries are on the same page as the rest of the team. They have some of the highest potential in the league if they can become a cohesive unit.

Immortals were in the driver’s seat to secure their playoff spot this weekend and choked. IMT built as large as an 8k gold lead, had full Ornn upgrades, had Ocean Soul  — the most powerful of the dragon souls — and still found a way to throw their opening game against Dignitas. IMT were still up 15 kills to 13 as Dignitas took down their Nexus at 56 minutes. Apollo “Apollo” Price finished the game a perfect 5/0/7 in the loss.

IMT then had another opportunity to secure their playoff spot against EG. As we mentioned earlier, EG won the game rather easily. IMT’s top half of Paul “sOAZ” Boyer and Jake “Xmithie” Puchero combined to go 2/9/8 and IMT lost 15 kills to six. Now, IMT will have to win twice to make the playoffs, including finding a win over the same Dignitas team that they let off the hook to begin the week.

Dignitas needed to win twice to force their way into a tiebreaker scenario and did so. The first was the aforementioned miracle comeback against IMT, but Dignitas also needed to beat TSM or it wouldn’t matter. Following that desperate comeback, Dignitas had one of their cleanest wins of the season over TSM. Heo “Huni” Seung-hoon played a controlled Ornn, Henrik “Froggen” Hansen played an aggressive Viktor, and Dignitas rolled to an easy 10 kills to 2 win.

Golden Guardians also needed to win twice to stay alive. They opened against CLG and won convincingly. Can “Closer” Çelik was active on Jarvan IV, setting up Kevin “Hauntzer” Yarnell (4/1/3) and Ian Victor “FBI” Huang (4/0/4) for success. GGS conceded only one turret in their easy 24 minute win.

GGS then pulled off an upset over FlyQuest to make it into the tiebreaker. Greyson Gregory “Goldenglue” Gilmer had one of his best games of the split, going 3/0/6 on Zoe while dealing a game-high 18.8k damage. Hauntzer had no problem on Ornn despite V1per’s Renekton counter pick, keeping up in CS and finishing 3/1/4 on the tank. GGS won this one in only 27 minutes to give them their most dominant week of the split at the perfect time.

TEAM LIQUID OUT OF PLAYOFFS

It’s hard to believe, but Team Liquid were officially eliminated from LCS playoff contention after a disastrous final week to the season. Team Liquid first lost in a lifeless performance against FlyQuest to open the week. Then, through a miraculous run of positive results, they still had a chance to move into a tie for sixth place in their final game. However, TL lost an absolute heartbreaker to Cloud9 to drop to 7-11 and out of the playoffs.

The last time Team Liquid failed to qualify for an LCS playoffs was in 2017 Summer, a season in which they also finished in ninth place. For context, Team Liquid’s most used lineup that season was Samson “Lourlo” Jackson top, Kim “Reignover” Yeu-jin jungle, Goldenglue mid, Chae “Piglet” Gwang-jin ADC, and Matthew “Matt” Elento support. TL then revamped with a lineup that would go on to win four consecutive LCS titles.

Guys played their hearts out, proud of the team for that. In the end, too late and not enough. Congrats to C9 and the other teams who will qualify. Of course disappointing but not paralyzing – will be back for summer.

There is no doubt that Steve “LiQuiD112” Archancet will be looking to revamp the roster heading into the Summer Split. TL’s drafts have been lacking in consistency and direction throughout the season, so it would make sense to start with some sort of coaching change. Even if there were player champion pool issues hindering the drafts, the final products rarely put TL on equal footing with their opponent. Whether that means giving more power in the draft to a new voice or completely overhauling the staff remains to be seen.

As far as the players go, it’s hard to say whether a change is warranted. TL dealt with Mads “Broxah” Brock-Pedersen’s visa issues to start the season, but that can’t be used as an excuse to finish week nine 0-2. Doublelift admitted a lack of motivation led to his benching, but TL bringing him back after only one game showed how highly they value him to the team. Jo “CoreJJ” Yong-in and Nicolaj “Jensen” Jensen both played well individually, leaving Impact as the weakest performer on the team.

Impact looked like he might be on his last legs when Sergen “Broken Blade” Çelik crushed him in the 2019 Spring Finals, but Impact then rebounded to be TL’s best player at the 2019 Mid-Season Invitational and was a rock for the rest of the year. He still isn’t the best mechanical player in his role, but he’s shown he can bounce back in his career. Still, he’s the most obvious candidate to be replaced if Steve and TL decide to make a move.

All of our tiebreakers will be played tomorrow (3/29) beginning at 12PM PDT / 9PM CET with @dignitas vs @Immortals! Thank you for watching and we will see you tomorrow! pic.twitter.com/S1Xmz09M0P

This is a rematch of the week nine game that Immortals blew. Dignitas seemed to have found something good when they put Huni on Ornn against TSM, so they may try to push him onto a tank in this must-win game. Immortals must bounce back from consecutive tilting losses. They built their lead against Dignitas by Xmithie getting rolling early on Pantheon, so they’ll try to set him up for a successful early game. The winner of this game will play Golden Guardians for the final playoff spot.

100 Thieves will undoubtedly play around Kim “Ssumday” Chan-ho, who has been the best top laner in the LCS this split. FlyQuest have seemingly committed to Solo, but neither he nor V1per has great odds into Ssumday. Instead, FlyQuest should focus on getting Tristan “PowerOfEvil” Schrage ahead. He should be favored into Tommy “Ryoma” Le, even if Ryoma has improved his play throughout the split. Both William “Meteos” Hartman and Lucas “Santorin” Tao Kilmer Larsen are very methodical junglers, so the pace could be slow early. The winner of this game will play Evil Geniuses to fight for the second seed.