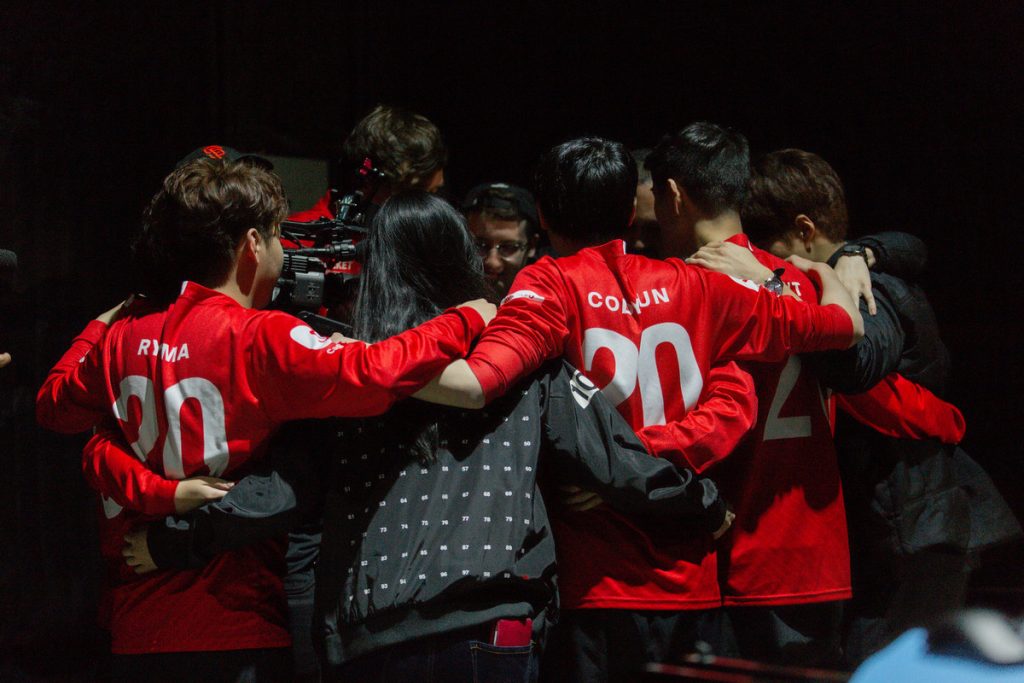 It was 100 Thieves, not TSM, to hand Cloud9 their first loss of the season. (Photo courtesy OSHIN VILLA TUDAYAN - Riot Games)

The fifth week of the League of Legends Championship (LCS) 2020 Summer Split has concluded. 100 Thieves pulled off a shocking upset to deal Cloud9 their first loss of the season, while Dignitas finally picked up their first wins. We take a look at where things stand in the LCS by looking at the top storylines so far in North America.

Cloud9 were on upset alert heading into week five. Not only were TSM the only team to beat them in 2020 Spring regular season, TSM looked even better so far this Summer. With the addition of Yiliang “Doublelift” Peng, TSM entered week five at 6-2 and tied with Team Liquid in second place. They were also on a four-game win streak.

After a close early game, Cloud9 pulled away like they always do, giving them a perfect 9-0 start to the season after the first round robin. They would begin their second pass through the LCS against 100 Thieves, a team C9 beat 14 kills to 2 in under 26 minutes in their first matchup. This time, however, 100 Thieves had a new roster and a new mentality to take down the top dogs in the LCS.

ARE YOU NOT ENTERTAINED? #100WIN pic.twitter.com/amRPq5n7M5

Former C9 jungler Juan “Contractz” Arturo Garcia, brought on to be a more aggressive replacement for William “Meteos” Hartman, was everything Tony “Zikz” Gray and Christopher “Papasmithy” Smith hoped he would be. Contractz dominated his jungle matchup with Spring MVP Robert “Blaber” Huang, using Blaber’s signature Olaf against him. It didn’t matter that Blaber’s Jarvan IV could lock Contractz’ Olaf into his Cataclysm — anyone unfortunate enough to be stuck inside with Contractz was dead.

Contractz dominated to the tune of a 10/1/7 score line, but he was hardly alone. Kim “Ssumday” Chan-ho may have died in a solo kill to Eric “Licorice” Ritchie, but his early wave management catapulted him ahead early and gave Contractz all the priority he needed on the top side. Ssumday also had a good invade on Blaber at his red buff to earn an early kill with Tommy “Ryoma” Le’s Galio.

While the primary focus of the result will be on Cloud9 finally dropping a game, it can’t be understated how big of a win this is for 100T. They entered Summer expecting to be a contender after a third place Spring finish, only to start the season 1-5. 100T made the two roster swaps in week four intending to play more aggressively, and that has definitely manifested in the past two weeks. 100T are 3-1 since the swap and are now only one game out of a playoff spot with almost half the season remaining. This is also with Poome playing on high ping from his home in Canada — he is expected to join the team in California next week.

For Cloud9, this had all the makings of a letdown game. Their match against TSM was hyped all week long, including a showmatch between old rosters of the two teams. TSM also gave C9 early trouble, so C9 had to play a closer game than they were used to playing. After the game, Jesper “Zven” Svenningsen called TSM the second best team in the LCS. So, even if you know you’re going to get every team’s best shot each game, it’s hard to keep up the same level of intensity for every game. C9 should be just fine, even with the loss.

After an 0-8 start to their season, Dignitas tried something they haven’t done since the second week of the season: stick to the same roster. Even if they got crushed by both Cloud9 and 100 Thieves — a loss that doesn’t look nearly as bad now — Dignitas opted to give the three-man squad of Samson “Lourlo” Jackson, Joshua “Dardoch” Hartnett, and Kim “Fenix” Jae-hun another shot. That move paid off as Dignitas not only picked up their first win of the season, but went 2-0 on the weekend after victories over Immortals and FlyQuest.

Fenix’s Azir got things kicked off against Immortals, picking up first blood on Kieran “Allorim” Logue’s Aatrox. Dignitas never looked back, taking their early gold lead and building on it throughout. Dignitas conceded only one death, picking up 15 kills in their 27 minute win. Lourlo’s Ornn finished 1/0/11 for 80% kill participation and Fenix led the team in damage with 16.9k.

Dignitas followed that win up with a big upset over Spring finalists FlyQuest. Fenix recovered well from giving up an early First Blood, picking up a triple kill in a Rift Herald fight to get ahead over Tristan “PowerOfEvil” Schrage’s Kassadin. Lourlo was a rock on Ornn again, conceding zero deaths while being the tanky frontline and gifting item upgrades to the rest of the team. Johnson “Johnsun” Nguyen’s Varus supplied the damage, going 6/1/8 with on-hit Varus and dealing a game-high 17.7k damage.

One thing that stands out from both games is that Immortals and FlyQuest left Azir open for Fenix. 100 Thieves and Cloud9 banned Azir in week four against Dignitas, forcing Fenix onto subpar games on Twisted Fate and Morgana. It’s unfair to label Fenix as a one-trick, especially considering how many professional games he has, but it still is clear that Azir is his best champion. Azir is Fenix’s most played champion in his career at 27 games, and his 66.7% win rate is one of his highest. As long as Azir stays in the meta, it seems unlikely teams will keep giving him over to Fenix.

Dignitas will undoubtedly take the same roster into week six after their first successful weekend. They’ll play Counter Logic Gaming and Golden Guardians as they attempt to extend their two-game win streak.

Entering week five at 4-4, Counter Logic Gaming had already exceeded their Spring win total and looked like a much better team. Still, the team thought they could do better with a roster change halfway through the season. Out went Kim “Ruin” Hyeong-min, in came in Alexey “Deus” Zatorski.

Deus has an interesting pro background. He began his career playing in the North American challenger scene as a mid laner, but went abroad for his first big opportunities. He first left to join M19 in Russia, but he only played three games as a substitute. He then moved to Korea to join bbq Olivers, where he transitioned from mid to top lane. Deus played 10 games with bbq before joining CLG Academy at the end of 2019.

Deus’ LCS debut came against world champion Jung “Impact” Eon-yeong and Team Liquid. Though Deus had a respectable 2/2/3 score line, Impact had the much bigger impact, carrying TL with a 7/0/2 Shen performance. There wasn’t much Deus could do when Impact just used his ultimate to get out of lane and help the rest of his team in skirmishes. Team Liquid won 10 kills to 5 in 38 minutes.

CLG then put Deus on carry duty in his second LCS game, blind picking him Gangplank into Evil Geniuses. EG top laner Colin “Kumo” Zhao responded with Riven, putting the two in a carry on carry matchup. Kumo got the better of that lane early, especially with help from his team, but Deus eventually scaled up in the side lane. CLG won a drawn out 48 minute game, with Dues going 6/5/8 and doubling Kumo in damage dealt.

It was definitely a good enough debut by Deus to warrant a start heading into week six. CLG will take on the two last place teams in Dignitas and Immortals as they attempt to climb above .500. 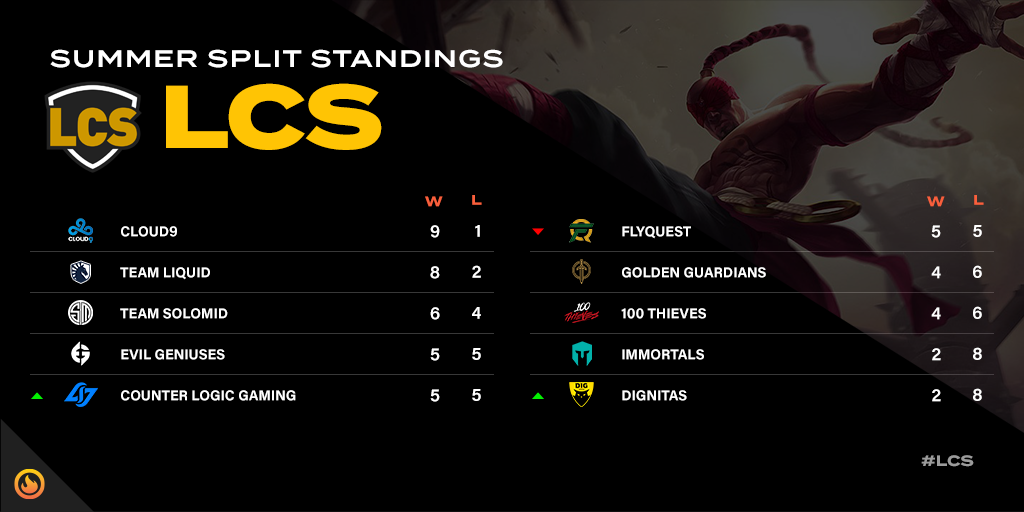 Cloud9 may no longer be perfect, but they still stand alone at the top of the standings. TSM’s two losses this weekend dropped them down to third, leaving Team Liquid alone in second place.

Dignitas and Immortals both picked up wins this weekend to make the bottom of the league look more competitive. 100 Thieves are now only a game out of a playoff spot after a dismal 1-5 start to the season. Evil Geniuses and FlyQuest, once thought to be the top C9 challengers, are both only 5-5 through 10 games.

This is a suddenly interesting match after the teams went in opposite directions in week five. TSM thought they would be the first to knock off Cloud9, but 100 Thieves were the first to follow through. TSM has tried to be more aggressive with Mingyi “Spica” Lu, but 100 Thieves have definitely shown their ability to match aggression with the additions of Contractz and Poome. Ssumday could crush Sergen “Broken Blade” Çelik in current form if TSM don’t give their top laner more attention.

A rematch of the Spring Finals, both teams are coming off a disappointing week five. FlyQuest lost to bottom half teams in 100T and Dignitas, while C9 picked up their first loss of the season. It wouldn’t be surprising to see FlyQuest substitute Jason “WildTurtle” Tran back in at ADC after Brandon “MasH” Phan has had a couple of underwhelming weeks. This game, like the Spring Finals, should be heavily C9 favored.