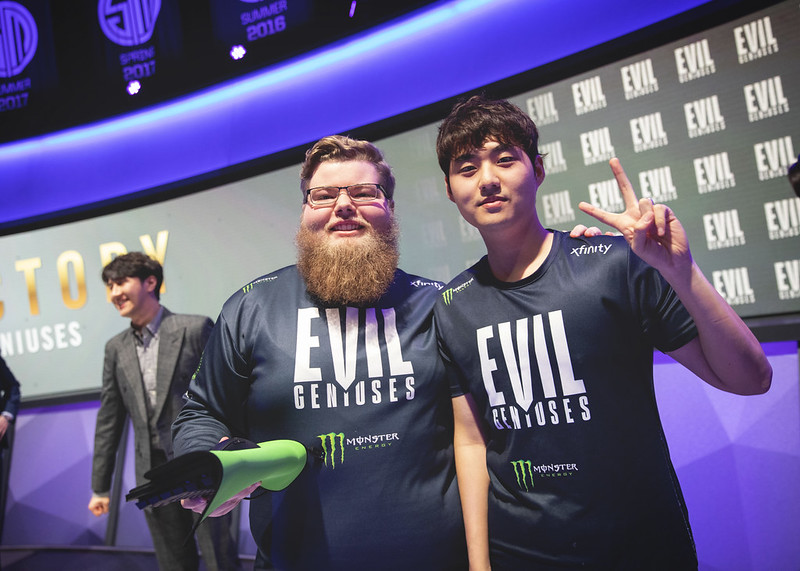 Evil Geniuses are one of the teams left fighting for a playoff berth. (Photo courtesy Colin Young-Wolff - Riot Games)

With only one week left in the League of Legends Championship (LCS) 2020 Spring Split, five playoff spots remain up for grabs. Teams resumed play with a new online format after a week’s delay caused by the coronavirus pandemic. In week eight, TSM went 1-1 for the first time, while Team Liquid’s 1-1 week has them on playoff life support. We take a look at where things stand in the LCS by looking at the top storylines so far in North America.

TSM looked dominant in their opener against GGS. Sergen “Broken Blade” Çelik has been playing like the best top laner in NA the past few weeks, and he got things started for TSM in this one. GGS set up a four-man dive on Broken Blade’s Aatrox at four minutes. Broken Blade flashed the CC, made Can “Closer” Çelik flash out of his Infernal Chains, and slammed Greyson “Goldenglue” Gilmer’s Rumble for First Blood.

The rest of TSM looked good as well. Søren “Bjergsen” Bjerg looked as polished as ever on his famous Syndra, contributing a deathless 5/0/6 score. Vincent “Biofrost” Wang also played his best champion, Thresh, and landed several good hooks, including denying Closer a chance at stealing Baron. Joshua “Dardoch” Hartnett had several good engages on Sejuani and Kasper “Kobbe” Kobberup played the perfect cleanup Aphelios. TSM looked like they were cementing their status as the second best team behind Cloud9 in the LCS.

Then the Immortals game happened. It wouldn’t be fair to say TSM played particularly poorly. They just had a harder-to-execute composition and couldn’t execute it. Immortals sniffed out Bjergsen’s Diana flank attempts so TSM could never get a proper team fight set up. Things would have been easier had they opted for a more traditional mid lane mage, as they already had engage in the form of Dardoch’s Sejuani with follow up from Broken Blade’s Gangplank ult and Biofrost’s Nautilus. Instead, Immortals won the late game team fights to inch their way close to the playoffs.

Though it was their first 1-1 of the season, it was perhaps the most fitting TSM week of the season. In game one, they looked like one of the best teams in the league, like they did in upsetting Cloud9. In game two, they looked like a team that either didn’t have a win condition or couldn’t figure out how to play to it. With little time left in the season, it might be time for TSM to go all-in on straightforward team fighting compositions and see how far it takes them this Spring Split.

Another 1-1 week did Team Liquid no favors in their push for one of the final playoff spots. At 7-9, they are still on the outside looking in and will need a lot to go their way in the final week of the regular season.

Congrats to @TLDoublelift as he is the first #LCS player to hit 1,500 Regular Season Kills in their career! pic.twitter.com/sYe6gihdnF

In their first game of the week against Evil Geniuses, TL had a moment to celebrate when Peter “Doublelift” Peng became the first player in LCS history to reach 1,500 kills. Unfortunately, it was the only kill Doublelift would get all game. Team Liquid looked as disjointed as ever, conceding nearly every objective without contest. Nicolaj “Jensen” Jensen’s Cassiopeia counter pick into Daniele “Jiizuke” di Mauro’s Leblanc was anything but a counter, as Jiizuke picked up 7 of EG’s 13 kills.

It was again hard to imagine how Team Liquid’s composition was supposed to succeed. Outside of a very difficult to land Varus Chain of Corruption, TL had no way to reliably engage fights. The Trundle jungle pick was also curious, considering EG’s only tank was a support Tahm Kench.

Team Liquid bounced back to crush Golden Guardians in their second game of the week. The gold remained even through most of the mid game, but TL was already up in kills and dragons with a scaling advantage. With Jo “CoreJJ” Yong-in on Rakan, TL also had a way to reliably start fights. The follow up potential from Jung “Impact” Eon-yeong’s Gangplank, Jensen’s Zoe, and Mads “Broxah” Brock-Pedersen’s Gragas made it an easy to execute composition for TL from ahead.

Still, the win may have been too little, too late for Team Liquid. TL probably have to win out to have any chance at a playoff berth, and that will still require losses from teams ahead of them in the standings. Those wins won’t be easy, either, as Team Liquid faces 9-7 FlyQuest and 15-1 Cloud9 to close out the season. C9 don’t have anything to play for, but they haven’t had anything to play for in their past four wins. But considering how things have gone so far this season, at least TL has a chance.

PLAYOFF SPOTS UP FOR GRABS

Only two teams in the LCS are not playing for a playoff spot in week nine. Cloud9, with a six-game lead over second place, have had the number one seed locked in for weeks. At the bottom, Counter Logic Gaming have known for weeks that they were officially eliminated from the playoffs. But none of the other eight teams have either clinched or officially been eliminated from the playoffs. That’s a lot more moving parts than in the LEC, where their playoff field has already been set heading into the final week of the regular season.

The 2020 #LCS Spring Split Standings at the end of week eight:

Evil Geniuses, FlyQuest, and TSM are in the best spots at 9-7. Each of them only needs to win one game to secure their playoff spot. They can all still end up making the playoffs even if they go winless in week nine. EG have the unfortunate burden of playing Cloud9 in their first game of the week, but none of the teams have a game against CLG. FlyQuest has the weakest remaining schedule of the three, facing 7-9 Team Liquid and 6-10 Golden Guardians to close the season.

100 Thieves and Immortals are both 8-8 and are the last two teams currently in the top six. 100T get a break by playing CLG for their last game of the season, but their opener against TSM will be tough, especially as TSM still has something to play for. Immortals have a chance to end Dignitas’ season in their first game of the week, followed by a game against EG. IMT hold an important 2-0 tiebreaker over TL, so they will be looking very good if they can pick up a win in week nine.

Team Liquid, Dignitas, and Golden Guardians are all still mathematically alive, but will need some help to make the playoffs. TL’s 7-9 record gives them a better chance, but their 0-2 records against IMT and EG hurt their odds. Dignitas and Golden Guardians would need to win out and have Immortals or 100T lose out to advance. Dignitas would have the tiebreaker over IMT if they win their week nine matchup, while GGS would lose a tiebreaker with 100T.

If it sounds confusing, it’s because it is. That’s what happens when five teams are all within one game of each other, with eight teams still in playoff limbo heading into week nine. Considering how close this season is, it wouldn’t be a surprise if there are a number of tiebreaker games needed to close out the season. It would only be fitting in a league where no team but C9 has stood out from the rest of the pack.

100 Thieves have been coming on strong as of late, winning three of their last four. The only loss in that span was to Cloud9. TSM are still probably the second best team in the LCS, but their inconsistency means they have yet to lock down their playoff spot. Broken Blade has been on a tear the past few weeks, but Kim “Ssumday” Chan-ho has probably been the best top laner over the course of the full season. Their matchup should be fun to watch. Tommy “Ryoma” Le has also been much improved over the second half of the season and gets a litmus test against Bjergsen.

There is a very real chance that this game won’t even matter by the time it’s played. Team Liquid could already be mathematically eliminated, while C9 haven’t had anything to play for in weeks. Still, these are some of the best individual players in the league. If TL still has a chance, we’ll get to see what they look like with their backs against the wall. On the other side, you know C9 would relish the chance to end former teammate Jensen’s run of LCS titles. It’s also in the realm of possibilities that TL upset C9 and still fall short of a playoff berth. There is just too much potential hype to ignore this matchup.