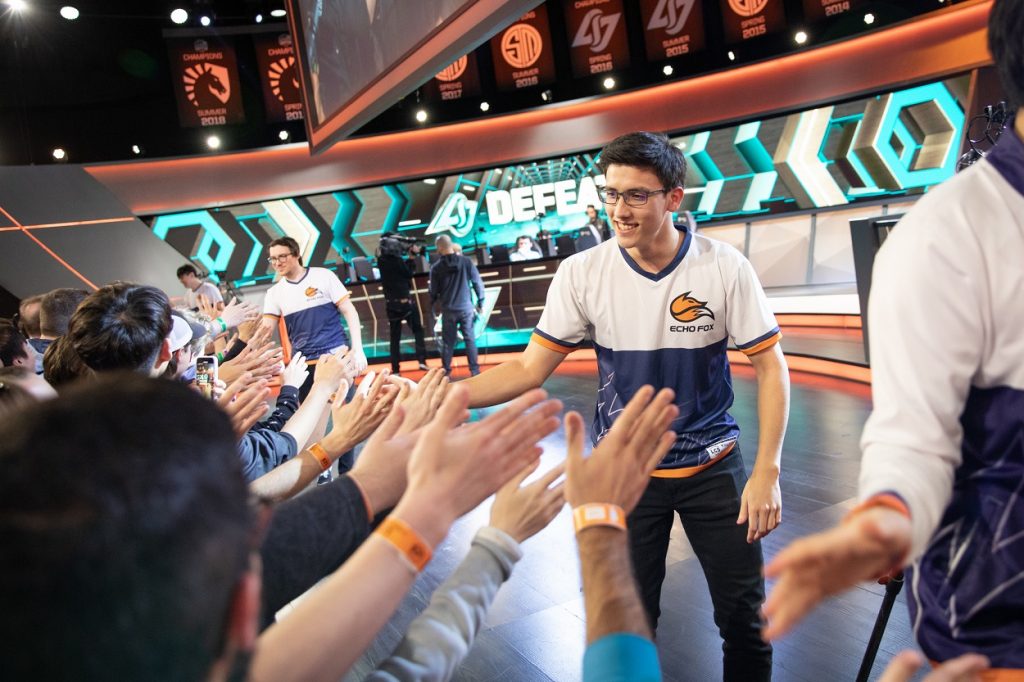 We’re through the ninth and final week of the 2019 LCS Spring Split regular season. Cloud 9 secured the second seed over Team SoloMid, Golden Guardians and Echo Fox secured the final two spots and Counter Logic Gaming fell just short. We look back at the match results, top story-lines, best plays and standout individual performances from the past week in North America.

The race for the final two playoff spots came down to the final day, but Golden Guardians and Echo Fox prevailed over Counter Logic Gaming and OpTic Gaming. Both teams went 2-0 in the final week of the regular season, though Golden Guardians fell in their rematch with FlyQuest in the tiebreaker for fourth place.

Echo Fox had to take on first-place Team Liquid in their first game of the week. Unlike G2 Esports, Team Liquid still opted to field their full lineup for the game, even though it was meaningless for their seeding. Echo Fox won’t complain after pulling off a huge upset win that helped secure them sixth.

Team Liquid picked up First Blood, but Echo Fox were ready on the counter. Teleports from Colin “Solo” Earnest’s Aatrox and Kim “Fenix” Jae-hun’s Lissandra turned the fight around 2 kills to 1 in favor of Echo Fox.

Jake “Xmithie” Puchero’s Rek’Sai outpaced Lee “Rush” Yoon-jae’s Jarvan IV in terms of early levels, but Rush had the stronger support from his team. He caught Xmithie out alone twice, using his crowd control to allow his team to cleanup the kills on Xmithie. Echo Fox had snowballed their early lead to 3.5k gold at 20 minutes.

Echo Fox then just rushed Baron on spawn. With a completed Blade of the Ruined King on Apollo “Apollo” Price’s Kog’Maw, Echo Fox were just barely able to shred it down before Team Liquid could collapse. TL picked up two kills and an air drake on the back end, but Echo Fox won that trade.

Team Liquid fought back with some picks of their own. Jo “CoreJJ” Yong-in’s Tahm Kench ultimate was used to perfection to engage mid and Jung “Impact” Eon-yeong’s Urgot ultimate offered strong execution damage.

Despite those lapses, Echo Fox found another important pick on Xmithie at 33 minutes, freeing them up to start Baron. Fenix zoned Team Liquid while Rush and Apollo secured Baron.

Echo Fox used Baron to push bot lane with a now 6.5k gold lead. Impact engaged a fight just before Team Liquid’s turret could fall, but Echo Fox won the fight with ease. They closed out the upset seconds later, winning 11 kills to 6 over the top team in North America.

As important as that win was for Echo Fox, they still had another crucial game left against Counter Logic Gaming. For the first half of the game, it looked like CLG would be the team advancing to playoffs.

CLG caught Solo out in his own jungle before a minute into the game, giving Raymond “Wiggily” Griffin’s Rek’Sai First Blood. Wiggily used that early gold lead to invade Rush’s Sejuani at will in the early game.

CLG built up a healthy 4.4k gold lead at 17 minutes, largely from the early game advantages they had in every role. Neeko beats Vladimir, Rek’Sai beats Sejuani, Zoe beats Kassadin, and Lucian beats Jinx. CLG needed to accelerate their gold lead while Echo Fox just needed to stop the bleeding long enough to scale up.

CLG mistakenly contested EF’s blue buff just before infernal drake spawned, losing Tristan “PowerOfEvil” Schrage’s Zoe before the fight. CLG then had to peel off and allow EF to take it uncontested, a huge swing in the game to stop CLG’s snowball and allow EF to power up their high DPS Vladimir, Kassadin, and Jinx.

It became obvious shortly thereafter that CLG could no longer win team fights, despite their 4k gold lead. Echo Fox finished some of their item spikes and won fights based on composition alone. Apollo picked up a triple kill at 23:30 in CLG’s jungle as the second infernal drake spawned.

That wasn’t all, though. The teams fought for another minute straight as players re-spawned and ran back to dragon, trading kills back and forth. The most important takeaway remained the second infernal drake pickup for Echo Fox.

With Darshan “Darshan” Upadhyaya’s Neeko now unable to win the side lane against Solo’s Vladimir, CLG were out of steam. Echo Fox took an uncontested Baron and marched into CLG’s base to secure their playoff spot. Echo Fox were strong enough to dive CLG’s fountain to secure a pentakill for Apollo’s Jinx and the win:

Golden Guardians didn’t need to win both matches in the final week like Echo Fox, but their first matchup against OpTic Gaming was critical. It turned out to be no sweat as GGS dominated the game from start to finish.

Golden Guardians then faced FlyQuest to force a tiebreaker for fourth place. They were successful, winning the game 14 kills to 8 in 40 minutes. Hauntzer had a great game on Cho’Gath, finishing 7/2/3. GGS’s bot lane was more involved in this one, as Matthew “Deflty” Chen’s Varus reached five items to finish 4/1/7.

FlyQuest won the rematch in the tiebreaker, despite having to make an emergency substitution for Lucas “Santorin” Tao Kilmer Larsen. Magnus “Maxi” Kristensen stepped in for Santorin, piloting Nocturne to a 3/2/13 score in FlyQuest’s win. Maxi looked great in the match and FlyQuest may find themselves fielding offers from other teams looking to shore up their jungle position for the Summer Split.

Team Liquid may have a Team SoloMid problem. Again with the caveat that TL were not playing for anything, TSM beat them for the second time this season. And convincingly.

Impact has not proven to be a match for TSM rookie top laner Sergen “Broken Blade” Çelik. Broken Blade pulled out Akali against Impact’s Vladimir, a nice flex pickup that both he and Søren “Bjergsen” Bjerg have been working hard on in solo queue. Bjergsen was more active than Nicolaj “Jensen” Jensen, using his teleport to help his bot lane build a lead on Yiliang “Doubelift” Peng and CoreJJ.

TSM are the only team in the LCS that can boast a better solo laner in both top and mid right now. That makes them a tough matchup for TL, as they can use their pressure advantage to influence bot lane and make life difficult for Doublelift and CoreJJ. Fortunately, TL have earned the right to avoid TSM in the playoffs until a potential Finals matchup, but here’s guessing they’ll prefer to see anyone else.

PLAYER OF THE WEEK: APOLLO

It was quite the weekend for Apollo. Echo Fox finished 2-0 — including an upset win over top-ranked Team Liquid — and clinched a playoff spot. Apollo himself finished a combined 12/3/4 on Kog’Maw and Jinx, including a pentakill to seal that playoff berth.

Historically one of the most consistent ADCs in the league, Apollo continues to prove he belongs on a contender. Though he’s never been the hyper-carry you build your team around, his consistency makes him a valuable asset to any team he’s been on. We’ll be looking forward to seeing him on the playoff stage again after his great performance in the final week.