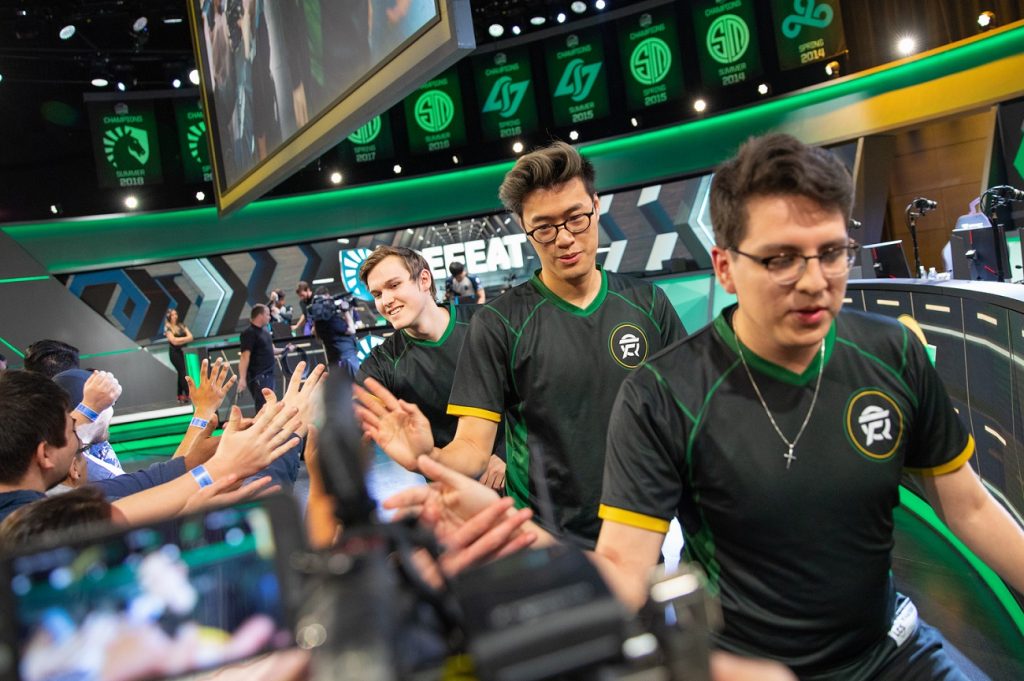 We’re through the eighth week of the 2019 LCS Spring Split. Team Liquid have clinched the top seed in the playoffs despite their loss to FlyQuest, who secured a playoff spot of their own. Counter Logic Gaming, Echo Fox, and OpTic Gaming are in a three-way tie for the sixth and final spot in the field. We look back at the match results, top story-lines, best plays, and standout individual performances from the past week in North America.

It may have been a meaningless game in the standings for Team Liquid, but they showed no signs of messing around in their draft against FlyQuest. They drafted three lanes and a jungler with early pressure advantage, all well entrenched as meta picks. If FlyQuest were to clinch their playoff spot against Team Liquid, they would have to earn it.

FlyQuest did just that, beating the best team in North America and allowing Eugene “Pobelter” Park bragging rights over his former team.

It didn’t happen quickly, though, as Team Liquid came out fast with their early pressure advantage. After invading Lucas “Santorin” Tao Kilmer Larsen at his red buff, Jake “Xmithie” Puchero’s Rek’Sai made a perfect read. He correctly predicted that Santorin would invade his own jungle, assuming that Xmithie would take his tempo lead and finish Santorin’s top side. Instead, Xmithie doubled back to his own raptors to catch out Santorin and secure First Blood for Team Liquid.

A four-man gank bot resulted in another three kills for TL, bringing with it a 2.5k gold lead at only 12 minutes. While FlyQuest would expect TL to have advantages early, this one was close to snowballing out of control before FLY could pick up their core items.

FlyQuest conceded their outer ring of turrets over the next 10 minutes, but otherwise held TL in check. They snuck away an Ocean Drake, evening the drake count at one apiece. FlyQuest snagged their first kill just prior to 24 minutes by picking off Xmithie with Santorin’s Skarner ultimate in the top river.

Though TL still had the gold lead, FlyQuest had stalled the game out long enough to realize their scaling potential. Corki and Ezreal hit their two-item power spikes and Omran “V1per” Shoura’s Aatrox could finally take control of the side lanes over Jung “Impact” Eon-yeong’s Kennen. With no true front line on TL, FlyQuest had now had priority in both split-push and team fight scenarios.

FlyQuest took the first Baron of the game after catching Jo “CoreJJ” Yong-in’s Rakan warding without team support in the top river. Jason “WildTurtle” Tran killed Xmithie to make sure there would be no smite contest, and FlyQuest picked up another two kills as TL desperately tried to regain control. That swing suddenly gave FlyQuest a 3K gold lead and the tools to open the game up.

Impact thought he had the perfect flank to shut down FlyQuest’s siege on TL’s mid inhibitor turret, but FlyQuest turned the fight around three kills to two and secured mid inhibitor and a Nexus turret. TL held onto their base, but not for long.

Team Liquid started up Elder Drake at 38 minutes knowing they could not wait for FlyQuest to set up around the objective. TL secured the four stack Elder with an incredible Kennen ultimate from Impact and now seemingly had control of the game. After a quick reset, they could force an uncontestable Baron with their active Elder buff and retake priority on the map.

If Baron shouldn’t have been contestable, FlyQuest didn’t get the memo. V1per’s Aatrox sliced through TL and killed Impact before he could get his ultimate or Zhonya’s off. He then flashed on Yiliang “Doublelift” Peng to take down TL’s only consistent source of damage and FlyQuest secured Baron for themselves. A quick push down mid lane was all FlyQuest needed to close out the game.

Pobelter finished the game 5/2/5 on Corki, out-damaging his replacement Nicholaj “Jensen” Jensen 25.4k to 24.5k. V1per finished a deathless 3/0/4, including catching out Doublelift in the pivotal Baron fight.

With the win, FlyQuest are assured of a playoff berth and no lower than the fifth seed. A win for FlyQuest over Golden Guardians in week nine would secure a minimum finish of fourth while two wins and two TSM losses would force a tiebreaker for third.

Team Liquid are already locked into the first seed though they have a rematch with TSM in the final game of the regular season.

Previously, Echo Fox benched Lee “Rush” Yoon-jae in favor of Panda after an uneven start to the season. They had alternated wins and losses for the first four weeks before an 0-2 weekend prompted the change. Instead of igniting the team, the move only seemed to backfire. Echo Fox went 0-4 with Panda and looked worse than ever.

Rush remains undefeated in his return to Echo Fox in the LCS. (Photo courtesy of Riot Games)

Enter the return of the Kind Boy. Nobody will argue Rush returned to the form that saw him crowned an LCS MVP years ago, but Echo Fox again looks like a team that could compete in the league.

Rush dealt a paltry 4.7k damage on Tank Jarvan IV, less than Nicholas “Hakuho” Surgent’s Braum support, but he played the role of a front-liner and was active with kill participation in all 13 of Echo Fox’s kills.

He upped that damage on Jarvan IV to 4.8k damage in their next win against 100 Thieves. He once again took part in every Echo Fox kill, giving him an astounding 100% kill participation on the weekend. Seriously, that’s nuts.

Of those five, Golden Guardians and Counter Logic Gaming look to have the easiest schedules remaining. Golden Guardians play OpTic Gaming and playoff participant FlyQuest, but hold at least a one-game lead over the rest of the field. CLG have matches against the already eliminated 100 Thieves and Echo Fox.

Some important 2-0 tiebreakers include Golden Guardians over CLG, OpTic over Clutch, and Clutch over Echo Fox. With such a clumped middle-of-the-pack, it looks likely that we’ll be heading to at least one tiebreaker for a playoff spot next weekend.

PLAYER OF THE WEEK: WILDTURTLE

WildTurtle is consistently one of the most exciting players to watch in the LCS. You never know when he will win FlyQuest a game or lose them one, but you know he will do something. This week it was all good in helping FlyQuest secure a playoff spot.

Facing off against 100 Thieves’ Bae “Bang” Jun-sik and Zaqueri “aphromoo” Black was no problem for Turtle and Juan “JayJ” Guibert. They made their mark immediately by killing aphromoo on his walk to bot lane at level 1. That early priority was key to FlyQuest controlling this one throughout, with WildTurtle finishing the game 3/1/4 on Xayah.

WildTurtle and FlyQuest picked Ezreal into Doublelift’s Vayne against Team Liquid, not exactly the ideal lane matchup. The early pressure from Xmithie and Jensen took its toll, but WildTurtle remained competitive in CS. When he finally hit his 2 item spike, WildTurtle made his presence known in team fights. His kill on Xmithie behind Baron pit was crucial to allow FlyQuest to take the objective without a smite fight. He finished with 31.4k damage dealt, easily most in the game.

We know what WildTurtle is about at this point in his career. His KDA of 3.88 on the season is good for only seventh in his role in the league. However, his CS per minute and gold per minute are second only to Doublelift among ADCs, while his kill and gold shares are tops among LCS ADCs. WildTurtle may die more than your average ADC, but he will make sure he gets his kills too. We’ll be excited to what he and FlyQuest have in store for the playoffs.