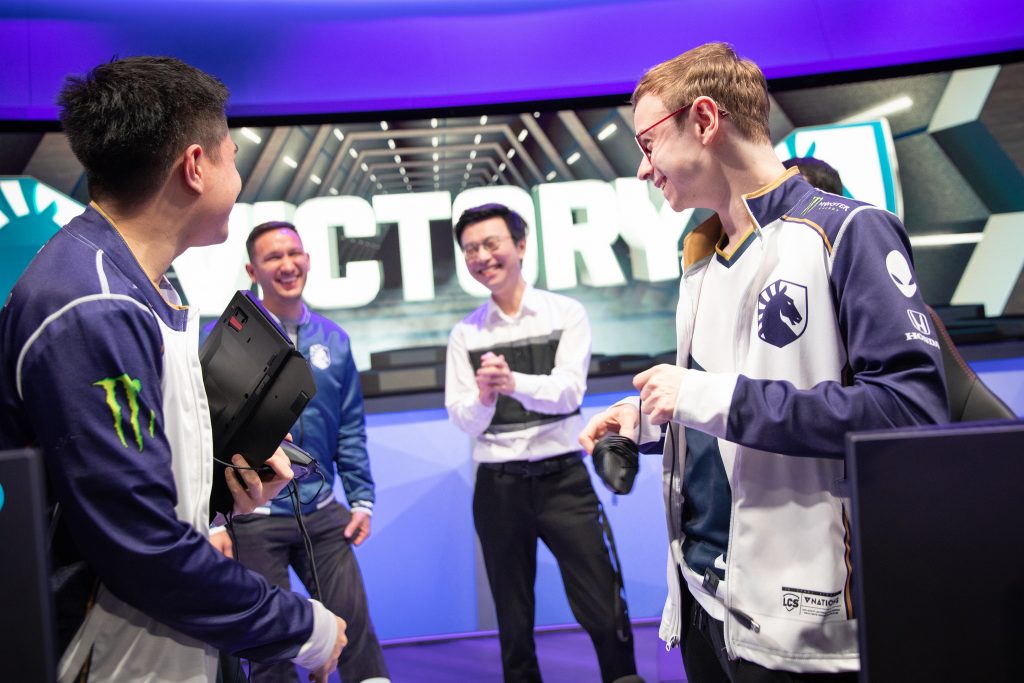 With a Liquid victory, they take a two-game lead and the tiebreaker over C9 (Photo courtesy of Riot Games)

We’re through the seventh week of the LCS 2019 Spring Split. Team Liquid are close to securing the regular season title with a 13-1 record. Some separation is starting to take place in the middle of the pack, as Golden Guardians and OpTic Gaming hold the final two playoff spots. We take a look back at the match results, top storylines, best plays, and standout individual performances from the past week in North America.

This was the big matchup to determine who will be the 1st seed in the LCS heading to playoffs. With a Cloud 9 win, they would tie Team Liquid atop the standings and even up the head-to-head score. With a TL win, they would take a two-game lead and the tiebreaker over C9, almost assuredly giving them the regular season title.

Jensen left Cloud 9 in part because he’s never won a title in his career. That might be about to change after his big performance against his old team.

Svenskeren tried to put the pressure on Jensen early, flashing in on Aatrox to dive Jensen’s Orianna. Jensen countered by using his flash and heal, gaining enough distance so that Svenskeren could not lock Jensen down with crowd control. Xmithie’s Sejuani and the mid turret did the rest of the work, turning a proactive C9 play against them only two minutes into the game.

Undeterred by the early failure, Svenskeren moved top only two minutes later to secure a kill on Impact’s Jayce. If Cloud 9 have an advantage over Team Liquid, it would be in top lane where Licorice is a more dominant 1v1 player than Impact as this point in their careers. Shutting down Impact’s Jayce would allow Licorice’s Poppy to turn the lane around in C9’s favor and render Jayce useless.

Xmithie came top right after, giving Impact a kill he sorely needed to stay relevant. Svenskeren invested more time top to deny Impact from some minion waves with Licorice, but the lane was now salvageable for Jayce. TL also picked up their first air drake while Impact was being zoned.

Cloud 9 sent their three-man top side to take Rift Herald at 15 minutes. Despite holding a level lead in each solo lane, they allowed Team Liquid to walk up and contest it. Xmithie hit his Sejuani ult on Svenskeren, locking him up before he could use his ult to revive. TL got the kill and walked away with the Rift Herald, a huge blunder for C9.

Another crushing moment for C9 came at 19 minutes. Licorice was a sliver of health away from solo killing Jensen. But Jensen got his Stopwatch off just in time, CoreJJ Galio ulted to help, and TL turned it around for a fight win in their favor. Jensen thwarted his former team by barely living once again.

TL, though not really ever taking a huge gold lead, were able to fight for every neutral objective on the map. Sure the drakes they got — double ocean and double infernal  — aren’t the most exciting, but they do help nonetheless.

In their brief moment of revenge, C9’s new mid laner Nisqy stole Baron from Xmithie at 34:30 with a well-timed Syndra combo. Svenskeren died in the pit for his attempted steal, but it isn’t often you see Xmithie miss a smite.

Team Liquid were still able to group up and fight around Elder Drake. Doublelift shredded through Svenskeren, giving TL access to the pit and an uncontested five stack Elder. With that in hand, TL were able to rampage through C9’s base to take double inhibitors.

C9 tried to force a fight down mid lane, but TL won the fight handily three-kills-to-one. They knocked down the double turrets and Nexus just after 40 minutes, securing the season head-to-head result over 2nd place Cloud 9. Jensen and Doublelift both went deathless in this one. Doublelift’s Kai’Sa finished 5/0/6, while Jensen’s Orianna finished 4/0/12 for an impressive 16 of 18 kill participation against his former team.

Team Liquid should only need to win two of their final four games to take the regular season title in the LCS. They will be heavily favored in their matches against Clutch Gaming, FlyQuest, and Echo Fox before their finale against Team SoloMid.

Cloud 9 also will only need two wins in their final four to clinch 2nd and a 1st round playoff bye, as they won the season series against TSM 2-0. They play Echo Fox, OpTic Gaming, FlyQuest, and Clutch Gaming to end the regular season.

The gold lead for 100 Thieves had ballooned to 5.9k at 25 minutes. 100 Thieves were ahead six kills to one, four turrets to zero, and already had a triple mountain drake stack — giving them insane pressure on neutral objectives at only 25 minutes. How could they lose from here?

Well, as we’ve seen throughout the season, 100 Thieves have struggled with macro and this game was no different. TSM used Nocturne ults to make proactive plays, while 100T struggled to actually push their lead in any meaningful way.

It also didn’t help that when 100 Thieves finally tried to take Baron at 32 minutes, Akaadian stole it from AnDa. 100 Thieves tried to pull off, but Bjergsen jumped in to deal enough damage to get it in smite range for Akaadian to finish it off. It was just another blown call from 100T in a season full of them.

Through all of this, 100T still managed to push down two inhibitors by 42 minutes. Triple mountain is just that strong, and the team still had a very beefy frontline for Bang’s Sivir. TSM pushed them away from taking the 3rd inhibitor, but 100T left with a large chunk of TSM’s base.

Akaadian found a pick onto Soligo just after 44 minutes to give TSM a numbers advantage with Elder Drake spawning. AnDa tried to steal it, but Akaadian won the smite fight again and TSM denied the five stack Elder from 100T. Bang and Ssumday tried to backdoor while TSM recalled, but were only able to take one of the Nexus turrets before TSM tracked them down.

TSM were able to pick up Baron uncontested at 46 minutes as 100T had run out of cards to play in the game. Now sporting a gold lead and better scaling, TSM were able to push 100T away from any fights and take their base without problems.

If there was anything that could sum up 100 Thieves current lack of direction, though, it would be the way TSM finished the game off. Instead of throwing themselves at TSM, 100T stood behind their Nexus and allowed TSM to finish it off. All five members of 100T were alive when TSM started their attack, and all five 100T members were alive as TSM finished the Nexus. The lack of initiative to do anything as their Nexus fell is stunning from a team that is just months removed from a Worlds appearance.

TSM have the inside track to the number three seed in the LCS and will need a lot of help to pass C9 for 2nd. Their remaining schedule is against Golden Guardians, Counter Logic Gaming, Clutch Gaming, and Team Liquid.

100 Thieves have four games to make up a two-game deficit to Golden Guardians or OpTic Gaming. They will face FlyQuest, Echo Fox, Counter Logic Gaming, and OpTic Gaming to try to salvage their season.

Player of the Week: Jensen

Jensen said he wanted to leave Cloud 9 for Team Liquid to finally win something for the first time in his career. He’s well on his way to winning a regular season title with TL, and they are heavy favorites to win the LCS Spring Split as a number one seed.

Jensen outplayed his former teammates in key spots against Cloud 9. The gank he survived at level two made a massive difference in how the early game played out, giving TL more control through the middle of the map. The Stopwatch against Licorice in his bot side jungle gave his team just enough time to collapse and bait C9 into a fight that TL could clean up.

His 4/0/12 performance against C9 must have felt sweet, but it wasn’t his only deathless game of the week. The next day his Leblanc finished 9/0/6 against Golden Guardians, an impressive feat given he was playing against a Karthus.

Nisqy is doing very well with C9 and they are still one of the top teams in NA, but Jensen reminded them again this weekend just what they’re missing without him.