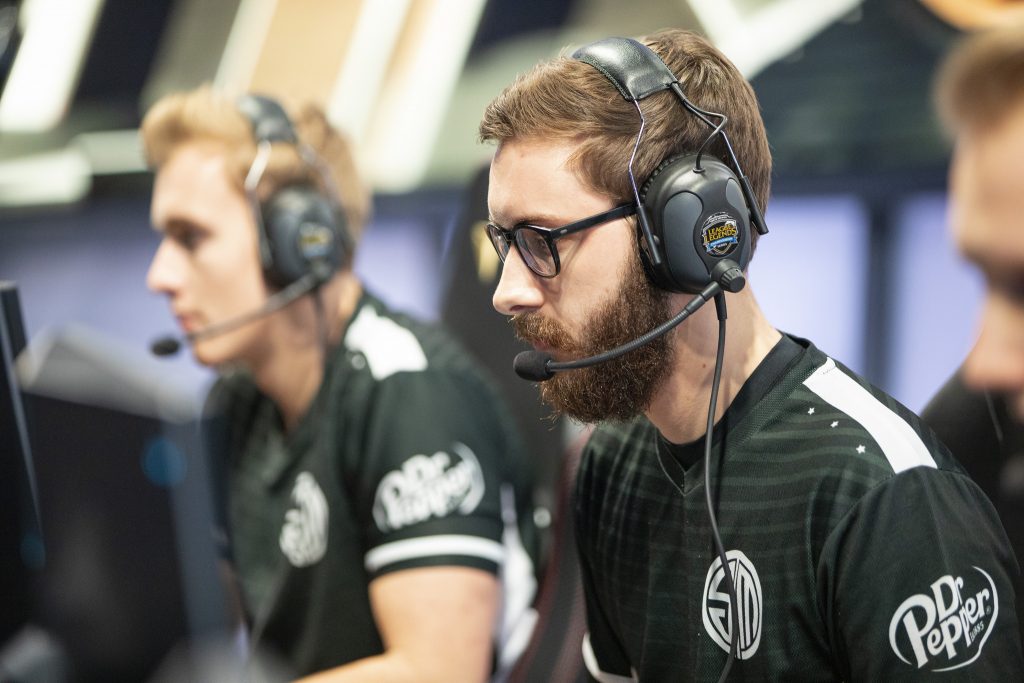 With two losses in the LCS this week, TSM has found themselves at the bottom of the standings. (Photo courtesy of Riot Games)

We’re through the third week of the LCS 2019 Spring Split. Team Liquid sits alone atop the standings, Cloud 9 are second, and the rest of the league is bunched up behind them. We take a look back at the match results, top storylines, best plays, and standout individual performances from the past week in North America.

Team SoloMid have had the same problem for the past couple of years. They’ve always been great at team fighting late into games but were reliant on getting to that point. They drafted to that strength but it made them very one dimensional and has been detrimental in the faster-paced metas over the past year.

With a new year and a new coach, TSM has made some changes. In both games this week against Cloud 9 and Golden Guardians, TSM drafted a better early game composition and one that can force team fights when ahead. Bjergsen was on Lissandra duty in both matchups, Akaadian played early spiking champions in Olaf and Camille, and Zven opted for the pushing power of Lucian and Sivir into Ezreal.

But unlike years past, TSM did not excel in mid game team fights. They had clear leads and opportunities to force fights, but could not find the right fights to take.

TSM were given two infernals against Cloud 9, allowing them the firepower to close the game out with their lead. Instead, C9 were the ones to find the right engages, grouping as five and picking off TSM while members were managing waves in side lanes. By giving C9 so much time to stall, eventually, we saw what Sylas can do in the right situation. Licorice was stealing 2 or 3 ultimates per fight against a team that included Zilean, Sion, and Lissandra.

Cloud 9 is at least a top team, so the loss against Golden Guardians was more troubling. Again they had the early lead, an early infernal drake, and Lissandra/Alistar/Camille/Sivir to engage. Froggen’s Karthus kept TSM too low after fights to push advantages on the map and eventually outscaled TSM’s composition.

So where do TSM go from here? If they want to continue to try to force fights earlier than previous TSM iterations, one consideration may be to start banning out Ezreal. He has had a lot of success in North America so far and is great at poking and disengaging from fights.

Speaking of Ezreal, the champion is now up to a 70.8% win rate in 24 games in the LCS. Amazingly he has not yet been banned during LCS play, despite being the most picked champion in the league. He went 7-2 in Week 3, with the only losses being OpTic Gaming to Team Liquid and Clutch Gaming to 100 Thieves.

Ezreal’s average KDA of 8.85 is the highest in the league for any champions picked more than 5 times.

So why aren’t teams prioritizing Ezreal even more highly than they have been? Ezreal has a safe laning phase, but he isn’t going to win any lanes. He starts slow while stacking his tear and by picking him you are basically conceding the bottom half of the map early.

Now, this should be a problem in the current meta, but it hasn’t been in North America. Maybe that’s because the Ezreal players are so good that they play patiently and perfectly in waiting for their power spike before popping off.

More likely though, Ezreals are getting away with their poor start because NA teams aren’t properly punishing him in the early game. Teams with Ezreal should be conceding early drakes — which have bonuses now — and lane priority for river and jungle movements.

This might not matter as we move to Patch 9.3 and crit is buffed. We will certainly be seeing more of the prototypical crit ADC users, a welcome sight to ADC mains everywhere. However, don’t be surprised if we keep seeing Ezreal in the LCS until teams prove they can deal with him.

Maybe a funny moment in the first game relaxed 100 Thieves from their enormous expectations. CG’s Huni played Zilean top and bought Spellthief’s Edge as his first item. The point of this is to take Kleptomancy as your keystone rune and to continuously auto attack your opponent without killing any minions — save for the cannon. By doing this, you can stay about equal in gold to your opponent while chipping down his health in lane.

Clearly not aware of the strategy, 100T ADC Bang paused the game to report a bug. His scoreboard was showing that Huni had 0 CS and he was sure that could not be true after multiple minion waves.

Coincidence or not, Huhi had his best game as a member of 100T. He was active early on Lissandra, roaming to CG’s top jungle to kill Lira’s Jayce early. As the game progressed, he found engage after engage for 100T by sweeping vision on CG’s flanks. When it looked like 100T might succumb to CG’s poke late in the game, he found a perfect 5 man engage that allowed 100T to ace CG 5 for 0 and end the longest game of 2019.

Meanwhile, Golden Guardians may have found a style that works for them after a couple of lost weeks. We saw Hauntzer’s Sion, Froggen’s Karthus, and Deftly’s Ezreal all repeat their champions this week in their wins. Contractz played scrappy bruisers on Nocturne and Aatrox, while Olleh stuck to melee peel supports Braum and Tahm Kench.

These compositions are much easier to play than the ones GGS were using in the first two weeks, and the results were immediate. GGS just farmed lanes out as best as they could for 15-20 minutes before grouping as 5 to force team fights. With a beefy frontline, consistent Karthus damage, and a self-sufficient Ezreal aided by peel, GGS looked like the dark horse that many thought they could be before the season.

Player of the Week: Froggen

Some were questioning whether Froggen was washed up after his first two weeks back in the LCS. He didn’t look outclassed by any means in lane, but the familiar narrative that he only plays for lane and never roams cropped back up. It wouldn’t have been a surprise to see him or GGS decide he should play a roaming champion in Week 3 if nothing else but to prove that he can do it.

Instead, Froggen and GGS leaned into the perception and brought back out one of his old favorites in Karthus. The results were phenomenal. Froggen farmed, farmed, and farmed to get himself to the point where he could carry team fights, and that he did. His final score lines were 3/1/7 vs OPT and 13/5/8 vs TSM. Even more importantly, he crushed the damage numbers, dealing 32.6k to OPT and 51.9k to TSM.

Yeah, Karthus is supposed to deal a lot of damage, but Froggen pulled it off in this fast-paced meta without hiding the pick in the jungle. That’s impressive and not something we’ve seen in other pro regions, much less the LCS. We’ll see if he can get away with it against fellow former EU mids Jensen and PowerOfEvil in Week 4.