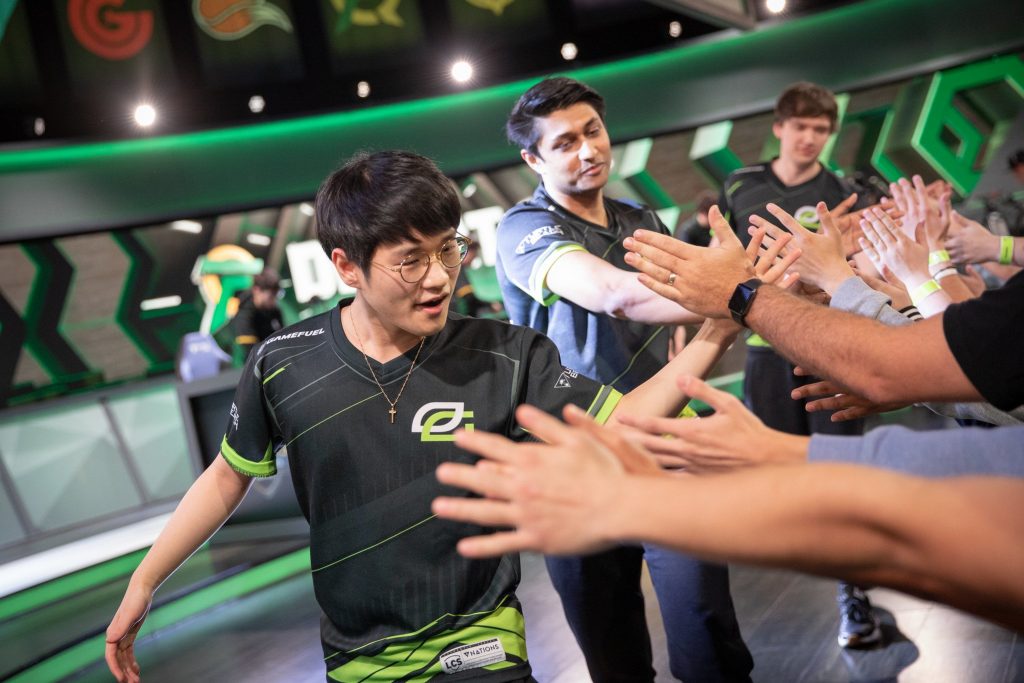 Optic Gaming and Clutch Gaming eked out LCS playoffs spots in the last week of the Summer Season. (Image via Riot Games)

The LCS Summer 2019 regular season has come to a close. Clutch Gaming and OpTic Gaming held off Golden Guardians and 100 Thieves for the final playoff spot, while Cloud 9 beat Counter Logic Gaming in a tiebreaker to secure a first-round bye. We look at where things stand and the top storylines after the ninth and final week in North America.

In one of the tightest finishes in LCS history, Clutch Gaming and OpTic Gaming beat out Golden Guardians and 100 Thieves to round out the six playoff teams.

Clutch Gaming controlled their own destiny in week 9 and took care of business, beating both 100 Thieves and Golden Guardians to finish 9-9 on the season, good for fifth place. Clutch Gaming finished the season 0-8 against the top four teams in the league, but 9-1 against all others, including splitting the season series against OpTic Gaming. That means they lost every game to a top-four team, won every game against the non-playoff teams and split the series against their fellow final weekend playoff team.

It may have been a big weekend for Clutch, but their players showed no signs of nerves in either of their games. They handled both from start to finish, proving they are this season’s FlyQuest, the team that isn’t quite in the elite tier of the LCS, but are still a cut above the rest of the league. Clutch exploited the weaknesses of 100T and GGS in their wins, attacking the solo laners of 100T and the bot lane of GGS.

Cody “Cody Sun” Sun continued wreaking havoc on the league, finishing 6/0/3 on Xayah against 100T and 4/0/12 on Sivir against GGS to close the season. That marks five straight deathless games for Cody Sun, even including a loss to Counter Logic Gaming. His introduction to the lineup over Chae “Piglet” Gwang-jin has been the biggest move in turning a team that finished 5-13 (ninth) in the Spring Season.

OpTic Gaming didn’t have as smooth of a ride to finish out their season, but they nonetheless joined Clutch Gaming as the final team in the playoff field. OpTic Gaming had to play tiebreaker games against 100 Thieves and Golden Guardians after finishing the season on a four-game losing streak. During that time, OpTic Gaming lost to Golden Guardians, Team Liquid, Counter Logic Gaming, and Cloud 9.

Given their slump and 100 Thieves’ miracle run to make it to tiebreakers, it was a surprise to see OpTic Gaming thump 100 Thieves when it mattered most. Lee “Crown” Min-ho shook off a terrible 0/7/2 Azir performance against Cloud 9 earlier in the day to finish 1/0/8 on Sylas, William “Meteos” Hartman got the best of the jungle matchup against Maurice “Amazing” Stückenschneider, and Terry “Big” Chuong’s Braum outplayed Zaqueri “aphroomoo” Black to see OpTic advance to the second tiebreaker match.

The oft-maligned top laner Niship “Dhokla” Doshi took over from there, absolutely crushing Kevin “Hauntzer” Yarnell’s Gangplank with help from Meteos and Crown. Dhokla doubled Hauntzer’s CS at 10 minutes and used his pressure to group around objectives and help OpTic push down GGS turrets. Dhokla eventually pushed down an inhibitor turret in Hauntzer’s face, giving OpTic a commanding lead they would never relinquish.

Aside from determining the last two LCS playoff spots, the most important battle left in week 9 was for the second seed in the LCS. Team Liquid secured the first seed with their 14-4 regular season, but Cloud 9 and Counter Logic Gaming were locked at 12-6 after CLG fell to 100 Thieves to close the season. Cloud 9 took care of business with wins over Golden Guardians and OpTic Gaming to force the tiebreaker.

After using Matthew “Deftly” Chen against his former team Golden Guardians and Robert “Blaber” Huang against OpTic, Cloud 9 unleashed their expected starting roster with Dennis “Svenskeren” Johnsen and Zachary “Sneaky” Scuderi against CLG. That move paid off in a big way, as C9 crushed CLG to secure a bye in the first round of the playoffs and will get to avoid playing Team Liquid in the Semifinals.

Sneaky and Tristan “Zeyzal” Stidam, often needled for their subpar laning, dominated Trevor “Stixxay” Hayes and Vincent “Biofrost” Wang in this one. Yes, they were playing a very strong laning combination in Caitlyn and Morgana, but CLG’s Xayah and Rakan duo are also considered one of the strongest lane combinations bot. That didn’t matter to C9, as Zeyzal hit bind-after-bind while Sneaky placed traps underneath the CLG duo and chipped their health bars away.

C9 used roams from Svenskeren and Yasin “Nisqy” Dinçer to dive CLG’s bot lane, putting them in a situation they could never recover from. Cloud 9 kept that pressure up en route to an easy 10-kills-to-2 victory in only 24 minutes. Zeyzal had a perfect support score of 0/0/10 with 100% kill participation and Sneaky’s Caitlyn finished 5/0/4 and up over 50 CS on Stixxay.

Cloud 9 will enjoy their week off to scout their future opponent in the quarterfinals, while CLG will take on OpTic Gaming in the opening round of the playoffs.

While some teams were fighting for their playoff lives, Team Liquid were already locked into the number one seed as they prepared for their final game of the season against TSM. The only question left in their season is how they would treat that game. Would they take it seriously? Would they sub in some of their academy players? Would they pull out some wacky picks and showcase NA as a fun region?

Team Liquid decided to leave their regular roster in for the game, but they did have a bit of fun with their draft. In a nod to Riot Games’ new autobattler Teamfight Tactics, Team Liquid drafted a full glacial composition of Volibear, Nunu (not in TFT, but a part of Freljord), Anivia, Ashe, and Braum. The composition was by no means meta, but they did play champions who are generally assigned to their roles.

They then smashed TSM with their glacial composition, winning 17 kills to 4 in only 30 minutes. That either speaks to their dominance over the rest of the LCS or how far TSM have fallen to close the season, depending on your perspective. Jung “Impact” Eon-yeong’s Volibear solo killed Sergen “Broken Blade” Çelik’s Sylas and Nicolaj “Jensen” Jensen’s Anivia completely shut down Søren “Bjergsen” Bjerg’s Zed.

Team Liquid will get to watch the quarterfinals from home before deciding their opponent in the Summer Semifinals. TSM will face Clutch Gaming to open the playoffs.

TSM swept the season series 2-0 as Clutch Gaming have been unable to beat any of the top four playoff teams in eight tries this season. TSM will be favored on the top half of the map, regardless of the jungler they choose to start, but Clutch Gaming’s bot lane has been playing at a much higher level than TSM’s over the past few weeks. TSM are the favorites, but they need to find their identity quickly against a team that does well to capitalize on mistakes.

Counter Logic Gaming have to shake off the disappointment of failing to finish top-two after a one-game lead on Cloud 9 heading into the final week of the regular season. They might want to do what OpTic’s tiebreaker opponents did not and ban away Dhokla’s Aatrox, by far his best champion. OpTic have a great veteran presence in Meteos, Crown, and Noh “Arrow” Dong-hyeon that should serve them well in these pressure-packed games. CLG are favored, but OpTic like to match CLG’s preferred split push style.