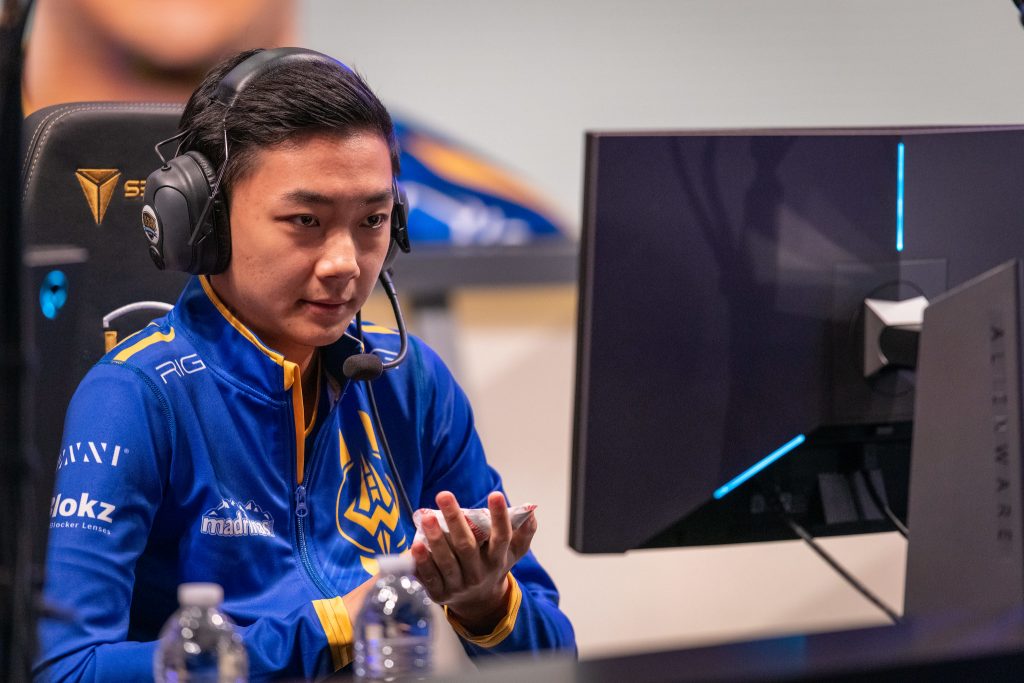 Week eight of LCS Summer 2019 is in the books. Golden Guardians picked up two crucial wins to jump into playoff position, while OpTic Gaming fell twice to set themselves up for a stressful final week. We look at where things stand and the top storylines after week eight in North America.

While they were still in a tie for the sixth and final spot heading into week 8, Golden Guardians looked like the best bet to fall out of contention. Their solo laners Henrik “Froggen” Hansen and Kevin “Hauntzer” Yarnell continued to play well, but the rest of the map was struggling. The new bot lane Victor “FBI” Huang and Choi “Huhi” Jae-hyun in particular had looked very poor since replacing Matthew “Deftly” Chen and Kim “Olleh” Joo-sung bot lane. They got demolished against Yiliang “Doublelift” Peng and Jo “CoreJJ” Yong-in in week 7 and didn’t look like they belonged in the LCS.

What a difference a week makes.

Just as importantly, FBI and Huhi looked like new players this week. While you would expect Hauntzer and Froggen to have a large advantage over FakeGod and Ryu, it was another thing entirely to see FBI and Huhi get the better of Bang and Aphromoo bot lane. Bang and Aphromoo have been one of the best bot lanes in the LCS since 100T’s revival, so GGS’ combined 7/0/13 bot lane score was shocking after week 7.

GGS and their bot lane didn’t stop there, picking up a 40 minute victory over OpTic Gaming to close the week. FBI’s Kai’Sa was a menace, dealing 36.9k damage and finishing 7/1/6 against another very good bot lane in Noh “Arrow” Dong-hyeon and Terry “Big” Chuong. Huhi also looked very comfortable roaming the map and establishing vision en route to a 0/2/13 score on Braum.

If Golden Guardians can get continued solid play from bot lane, look out. Juan “Contractz” Garcia has had his problems since leaving Cloud 9, but his aggressive style requires support from his teammates to work. If the past two games are any sign, he may have that support now.

Golden Guardians close the season with two big matchups. GGS play Cloud 9 in their first matchup, one win in hand already this season. A sweep for GGS and 0-2 week for Cloud 9 would see GGS jump Cloud 9 in the standings.

But most important for Golden Guardians is their second matchup of the week against Clutch Gaming. As long as Golden Guardians win that one, it should guarantee them a playoff spot by virtue of beating 100 Thieves twice in the regular season. We’ll get to see their do-or-die team composition as they have no margin for error now.

Aaron “FakeGod” Lee hasn’t shied away from being self-critical of his performance. The 100 Thieves rookie top laner was quick to tweet “lose lane win game”  after a game in which he went 0/4/5 on Kennen against Omran “V1per” Shoura’s Camille, acknowledging that he was carried despite a poor laning phase.

So when FakeGod tweeted “win lane lose game” after his first matchup against TSM, Sergen “Broken Blade” Çelik wasn’t impressed. Broken Blade pointed out that 100 Thieves put FakeGod in an incredibly advantageous situation and implied that FakeGod did nothing special.

FakeGod explained in a follow-up tweet that he was joking, but the meme lived on. Several pro players would go on to copy and paste Broken Blade’s twitter post whenever a top laner would get put on an island when junglers were splitting the map.

100 Thieves and TSM matched up for the first time again this past weekend, giving us round two in the rivalry. 100 Thieves once again sent Maurice “Amazing” Stückenschneider top early and often, but Broken Blade played around the first two ganks very well, even managing to spam his taunt after the ganks failed.

However, instead of his team carrying through the bot lane, TSM lost the bot half of the map. Amazing, Yoo “Ryu” Sang-wook, Bae “Bang” Jun-sik, and Zaqueri “Aphromoo” Black all went deathless in a 100 Thieves route. To add insult to injury, FakeGod and Amazing did eventually find kills on Broken Blade top lane as well.

FakeGod tweeted after his team’s win over TSM. While his intentions were clear, it is a bit disappointing that he didn’t match the same number of Ds in the tweet as Broken Blade’s original. Regardless, this has the makings of a fun rivalry going forward in the LCS.

FlyQuest needed to win their remaining four games to have any shot at the playoffs after their terribly disappointing start to the season. As poor of a Summer Season as the team has had, they were clearly the fourth best team in the LCS in the Spring Season, and that ability was still lurking somewhere inside.

Unfortunately for Cloud 9, they were the recipients of FlyQuest putting together their finest performance of the Summer Season. Eugene “Pobelter” Park got off Corki and Azir duty to last pick Yasuo into Yasin “Nisqy” Dinçer’s Twisted Fate to great effect. Pobelter finished 5/0/11 and was the more impactful mid laner throughout.

Lucas “Santorin” Tao Kilmer Larsen pushed aside his poor split to dominate top LCS MVP candidate Dennis “Svenskeren” Johnsen in the jungle. He started the game off quickly, going from his top side red buff to a bot lane gank immediately to pop Matthew “Deftly” Chen’s Ezreal for First Blood in his Cloud 9 debut. Santorin kept up that tempo and finished the game 4/1/13 to Svenskeren’s 0/4/6 and FlyQuest needed less than 30 minutes to dismantle Cloud 9.

But for as well as they played against Cloud 9, FlyQuest equally laid an egg against Clutch Gaming to doom their season. Heo “Huni” Seung-hoon and Cody “Cody Sun” Sun had standout, deathless performances as Clutch Gaming were better individually than FlyQuest.

Week 8 was a microcosm of FlyQuest’s season. Just when it looked like they were turning it around, they would fall back again, until finally there is no longer hope for the Summer Season. FlyQuest could still make the Regional Finals, but a lot will have to break right for them after they failed to qualify for the playoffs.

Both seventh-place teams are on the outside looking in as the final week of the regular season approaches. Clutch Gaming won the first matchup on the season and are an incredible 7-1 against teams not named Cloud 9, Counter Logic Gaming, Team Liquid, or TSM on the season (of which they are a combined 0-8 against). Huni and Clutch Gaming will look to attack FakeGod in the top lane.

It was surely thought to be an important game for playoff seeding when the schedule was made, but now TSM may need to win this game just to clinch a playoff spot. Team Liquid are an overwhelming favorite to clinch the number 1 seed, but still can be caught by both Cloud 9 and Counter Logic Gaming. This Spring Season Finals rematch is much more important for the tail spinning TSM team that needs to right the ship as Worlds qualification draws near.