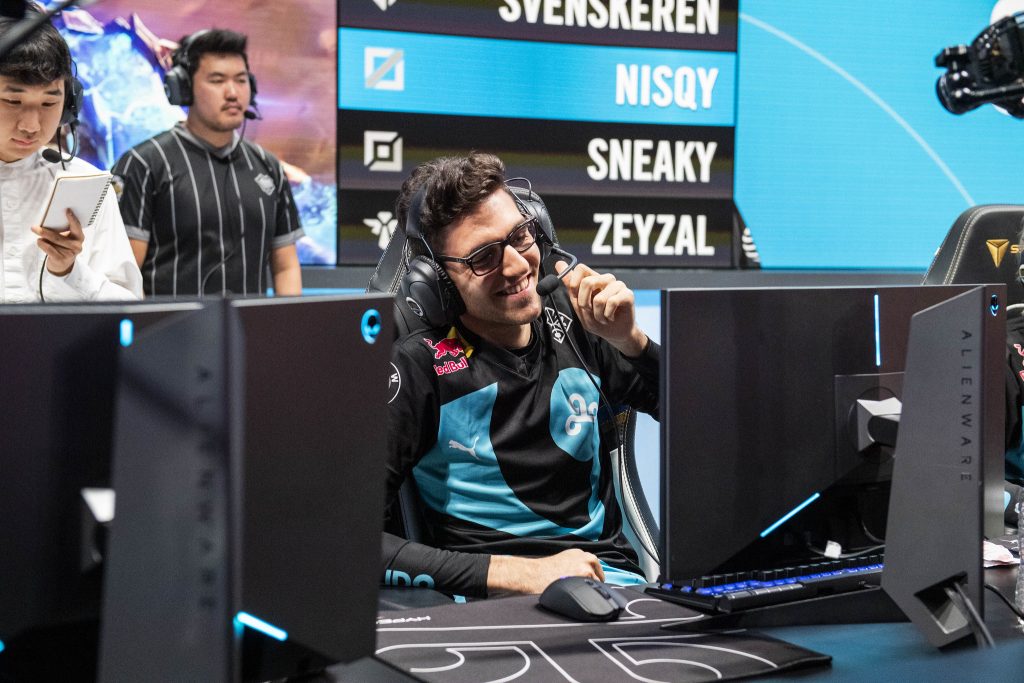 Despite a 7.8K gold disadvantage, Cloud9 rallied to defeat TSM in the LCS (Photo courtesy of Riot Games)

Week six of the League of Legends Championship Series (LCS) 2019 Summer Season is in the books. Team Liquid reclaimed sole possession of first place, while 100 Thieves have climbed within a game of a playoff spot. We look at where things stand and the top storylines after week six in North America.

CLOUD9 RALLY VS TSM IN BATTLE FOR 2ND

A 7.8k gold lead at 22 minutes wasn’t enough for TSM to close out Cloud9 in the battle for second-place in the LCS. TSM’s incredible early game earned them Rift Herald, double infernal drakes, and an eight kills to two and four turrets to zero lead. Their lethality builds on Sergen “Broken Blade” Çelik’s Jayce and Jesper “Zven” Svenningsen’s Varus were online and TSM should have broken Cloud9 with their poke.

Dennis “Svenskeren” Johnsen’s Jarvan IV had other ideas. A day after watching Robert “Blaber” Huang and his team blow a mid-game lead, Svenskeren showed how to play from behind. Svenskeren waited for TSM to overstep at C9’s top inner turret and used his gap-closer to lock three TSM members inside his ultimate. Broken Blade fell to a Lux snipe by Tristan “Zeyzal” Stidam, and though TSM picked up a kill on Yasin “Nisqy” Dinçer afterward, this was the first of many successful C9 engages into TSM’s poke composition.

The combination of Zachary “Sneaky” Scuderi’s Sivir ultimate On the Hunt and Svenskeren’s flag-and-drag gave C9 the ability to engage TSM before they could ever get their poke off. Andy “Smoothie” Ta’s Tahm Kench could save one player at a time, but any 5v5 fight at full health was bad news for TSM. Søren “Bjergsen” Bjerg’s Rumble was the best shot TSM had of turning those fights around, but he had one of his worst games of the season on this new pick. Bjergsen mismanaged his passive in multiple fights to silence himself before he could ult, while the ults he did get off missed their mark.

This game showcased the worst from each team. TSM pushed around Cloud 9 in the laning phase, particularly bot lane. Sneaky and Zeyzal had the range advantage bot lane but TSM’s duo still had lane priority throughout, even if Sneaky’s Sivir would scale better as the game progressed. Cloud9 needs to get better laning performances from their bot lane if they want to compete against the best teams in the world.

TSM once again fell apart in the mid-late game. For a team that was routinely criticized for only playing for the late-game in the past couple of years, TSM has transformed into a dominant early game team who can’t quite figure out how to consistently close their leads. One pick against them snowballs into another and the team loses their ability to establish vision to play around their split-pusher, until they eventually just group as five despite having the weaker team fight composition.

TSM have a chance to work on those issues against a pair of .500 teams in Golden Guardians and OpTic Gaming next week. Cloud 9 will face the rising 100 Thieves before the falling Counter Logic Gaming.

100 THIEVES ONE GAME FROM PLAYOFF SPOT

With a 2-0 record in week 6 of the LCS, 100 Thieves is inching towards a playoff spot. (Photo courtesy of Riot Games)

A tough week 5 schedule brought 100 Thieves’ three-game win streak to a halt but was not enough to kill the momentum they had built with their new lineup. Consider their first test of adversity passed with a 2-0 week 6 against OpTic Gaming and Echo Fox.

Maurice “Amazing” Stückenschneider had another great week, finishing with 10 of 12 kill participation in both 100 Thieves wins. He went from not playing in the Spring Season to being one of the best junglers in the LCS in the Summer, transforming one of the worst teams in the league. It’s very unlikely that a jungler in a non-carry meta from a middling team would ever be named league MVP, but Amazing has had that type of impact in his first season with 100T.

Likewise, the insertion of Yoo “Ryu” Sang-wook into the starting lineup has transformed the team. Amazing wasn’t running over the other junglers in the LCS before Ryu brought an improved presence mid lane. He’s certainly nowhere near his prime, but his leadership has more than made up for his mechanical deficiencies. Ryu matched Lee “Crown” Min-ho in lane against OpTic Gaming without issue, neutralizing OpTic’s biggest advantage.

Aaron “FakeGod” Lee had an outstanding weekend as well. Nobody will mistake him for Kim “Ssumday” Chan-ho, but FakeGod has played his low-resource role well since his LCS debut. FakeGod took that to a new level in week 6, shaking off every attempted gank against him en route to a deathless week. He finished 0/0/8 on Gangplank against OpTic Gaming before going 1/0/5 on Kennen against Echo Fox.

The win over OpTic Gaming was a crucial two-game swing for 100 Thieves in the standings as they try to steal away the final playoff spot. They face Cloud 9 next week before playing FlyQuest in another game with huge playoff implications. A win over FlyQuest would give 100 Thieves the tiebreaker over another team in the playoff hunt and would inch them closer to postseason play.

Team Liquid continued their march toward destiny with another 2-0 week in the LCS, giving them sole possession of first place. Another LCS title would give them four in a row, the ultimate redemption for the team known for finishing fourth place. As things stand after six weeks, no team in the LCS looks ready or capable of challenging them for the title.

Things can change quickly in League of Legends, and best-of-one regular seasons can be too small of a sample size to get an accurate reading on the strength of teams. But with all the data we’ve gathered, Team Liquid looks to be overwhelming favorites in the LCS. They finished first in the Spring regular season and playoffs. They upset Invictus Gaming and made the finals of the Mid-Season Invitational. They took two games off G2 Esports at Rift Rivals and were the only LCS team to have a good showing. And now they are again alone in first-place, easily beating Counter Logic Gaming as Cloud 9 and TSM exhibited their weaknesses against each other.

Their lopsided loss to G2 Esports at MSI has hopefully rid them of complacency as they enter the stretch run of the Summer Season. Neither Clutch Gaming nor Golden Guardians offer an exciting matchup this week, so that may make it even more important to see Team Liquid end week 7 2-0. If they take care of business, no team in the LCS should be able to catch them in the final month of the season.

100 Thieves are must-watch as they attempt to redeem their last year of play. Cloud 9 will boast the superior solo lanes, regardless of whether Eric “Licorice” Ritchie or Ziqing “Kumo” Zhao plays, but 100 Thieves have the stronger bot lane. Amazing against Svenskeren should be the jungle matchup of the season, assuming Bok “Reapered” Han-gyu doesn’t pull the rug out and start Robert “Blaber” Huang.

Counter Logic Gaming and Cloud 9 play an important game for the fight for a first-round bye in the playoffs. C9 won the first matchup and would take a commanding two-game lead with tiebreaker advantage with a win. CLG will try to play through their bot lane, but C9 should be able to target Kim “Ruin” Hyeong-min top lane.

Both of these teams expect to make the playoffs, but neither are among the top-six at present standing. Odds are that only one will sneak their way in, so this game will go a long way toward determining the playoff picture. FlyQuest will try to play through Omran “V1per” Shoura against FakeGod, but Ryu and Amazing have been outperforming Eugene “Pobelter” Park and Lucas “Santorin” Tao Kilmer Larsen this season.