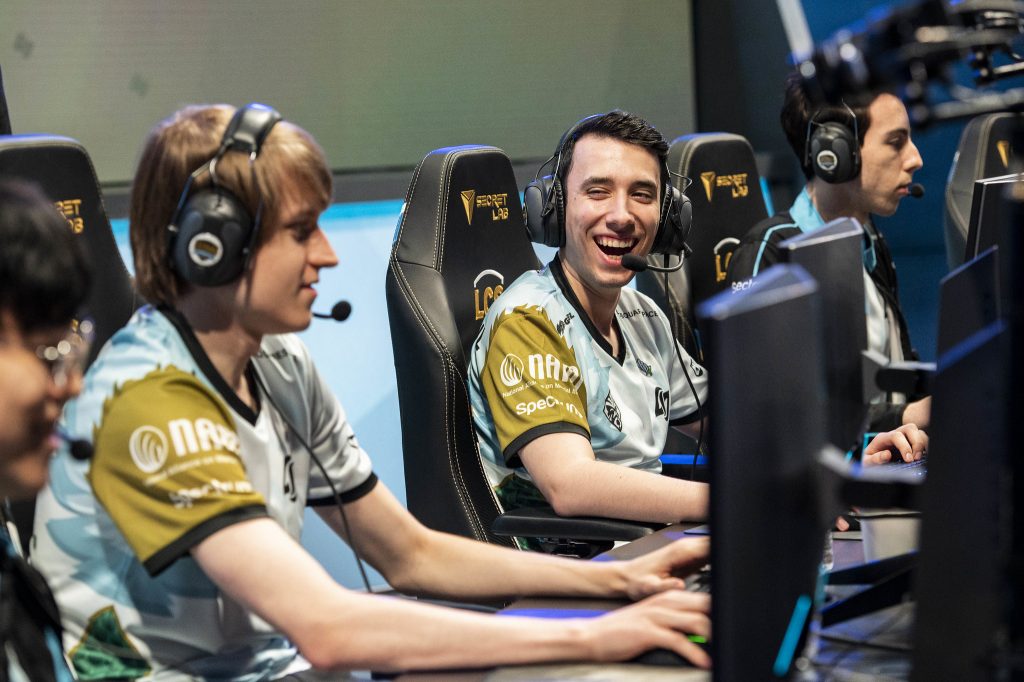 CLG broke their loss-streak versus TSM in week five of the LCS 2019 Summer Season. (Photo by Timothy Norris/Riot Games)

Week five of the League of Legends Championship Series (LCS) 2019 Summer Season is in the books. Counter Logic Gaming (CLG) snapped their 14-game losing streak to TSM, and FlyQuest picked up some momentum with their first weekend-sweep. We look at where things stand and the top storylines after week five in North America.

It took over three years — 1176 days to be precise — but Counter Logic Gaming finally beat their rival TSM once again. Trevor “Stixxay” Hayes is the only player left from that CLG team that beat TSM to win the 2016 Spring Finals.  Though his 2/3/8 score isn’t eye-popping, the lane dominance he and Vincent “Biofrost” Wang asserted over Jesper “Zven” Svenningsen and Andy “Smoothie” Ta made the upset possible. Stixxay and Biofrost constantly harassed the double melee Yasuo and Gragas lane, taking uncontested turret plates and priming the TSM duo for dives via Raymond “Wiggily” Griffin and Tristan “PowerOfEvil” Schrage.

For TSM, the problems were noticeable in the early game. Roams from Matthew “Akaadian” Higginbotham and Søren “Bjergsen” Bjerg at eight minutes were supposed to grab TSM First Blood, but Zven’s Yasuo never ulted on Smoothie’s Flash-Body Slam. The turret dive became a disaster. Double teleport from PowerOfEvil and Kim “Ruin” Hyeong-min turned the fight easily in CLG’s favor for First Blood and a 2-for-0.

Minutes later, TSM tried bringing all five down bot while Ruin’s teleport was still on cooldown. Though successful picking up an initial kill, TSM got caught in between CLG’s bot turrets by Wiggly and PowerOfEvil. CLG were able to chase TSM down 3v5 to pick up three kills and blow the game open.

We highlight these plays not only because they were crucial to springboarding CLG’s lead but also to illustrate how the tables were turned in this edition of the CLG-TSM matchup. CLG have been the ones prone to force bad plays against TSM, scared of their prowess in the late game and obviously feeling the pressure of the streak. This time, CLG played calmly while TSM forced bad plays and dug themselves into an early hole. Proactivity may be rewarded in the current meta, but only when done right.

CLG are now in a three-way tie for first place and hold a head-to-head win over the prohibitive favorites Team Liquid. CLG look to be a real threat to unseat one of the “big three” LCS teams for 2019 World Championship qualification. Unfortunately for TSM, that could be them. They now slide into a tie for fourth place with OpTic Gaming and have split the season series with CLG. Their week six game against Cloud 9 will be crucial in the standings.

FlyQuest did not play the prettiest of games this weekend, but a 2-0 record is just what the team needed to get back on the right track. Maybe they needed a weekend off, maybe the switch to Kim “Wadid” Bae-in at support is paying off, or maybe their schedule just lightened up at the right time. Whatever the reason, FlyQuest are no longer in last place and are now only two games out of a playoff spot with four weeks to go.

Eugene “Pobelter” Park has acknowledged his struggles so far this season, but he reminded us why he’s had so much success in the LCS this weekend. Never flashy, Pobelter piloted his ranged carries well in week 5, finishing a combined 7/3/15 on Corki and Azir compared to a combined 1/9/5 K/D/A for his lane opponent. This includes a 0/5/4 outing on MVP candidate Lee “Crown” Min-ho of OpTic Gaming. Pobelter is definitely back to being a top 10 mid laner in NA.

Regardless of whether Juan “JayJ” Guibert was struggling, Wadid has played very well since being inserted into the starting lineup. Wadid played Yuumi both games in week 5, finishing with the perfect support scoreline: 0/0/27. Not surprisingly, Jason “WildTurtle” Tran had his best week of the Summer Season, finishing 9/1/13 on Xayah and Ezreal.

FlyQuest will need to keep that momentum going into week 6 with big-time matchups looming. Saturday they will play current sixth-place team Golden Guardians, a crucial game that could swing the final playoff spot. Sunday FlyQuest will take on the three-time reigning LCS champions Team Liquid.

Eric “Licorice” Ritchie revealed prior to week five that he’s battling the dreaded wrist pain that has hampered many pro careers before him. After speaking with a specialist, Licorice took week five off to rest, allowing Ziqing “Kumo” Zhao to make his LCS debut. Would Kumo be able to stay competitive with Jung “Impact” Eon-yeong and Team Liquid?

Absolutely. Not only did Kumo stay competitive, he out-played Impact for a solo kill top in a carry-versus-carry matchup. That might not have been impressive earlier on in the Spring Season, but Impact has been in great form and has been crushing international competition of late. To play well against him in an LCS debut is more than impressive.

Though he didn’t play quite as well against Heo “Huni” Seung-hoon, Kumo and Cloud 9 will be ecstatic to pick up two wins on the weekend and pull into a tie for first place in the LCS. A game against last-place Echo Fox to kick off week 6 may mean Kumo gets another opportunity to play on stage. Sunday’s lineup choice will be telling to the severity of Licorice’s injury. Cloud 9 face TSM and a loss would give TSM the 2-0 head-to-head tiebreaker.

FlyQuest probably need to win this game to have a realistic chance of making the playoffs a season after their top-four finish. Pobelter needs to play like week 5 and not weeks 1-4 or FlyQuest will be in big trouble against Henrik “Froggen” Hansen.

Team Liquid may already be looking ahead to the playoffs and beyond, but Counter Logic Gaming are a real threat to steal away the regular season title with a win in week 6. CLG won the first meeting and could extend a virtual two-game lead in the standings. Yiliang “Doublelift” Peng and Biofrost reunite once again.

A rematch of the Spring Semifinals that TSM won 3-2. TSM won the first meeting in the season but sit a game behind Cloud 9 in the standings. This matchup features some of the most explosive solo lane potential in Bjergsen versus Yasin “Nisqy” Dinçer and Sergen “Broken Blade” Çelik versus Licorice or Kumo.