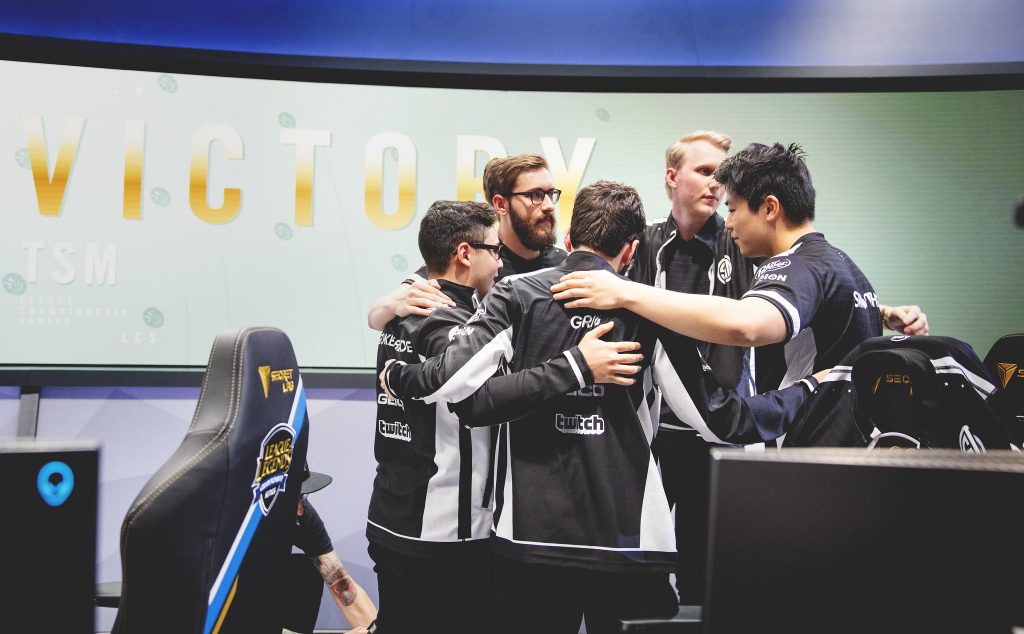 After three weeks of play in the LCS, six teams are tied for first place (Photo courtesy of Riot Games)

Week 3 of the League of Legends Championship Series (LCS) 2019 Summer Season is in the books. An astounding six teams are tied for first place, while 100 Thieves, Echo Fox, and FlyQuest are tied for last. We look at where things stand and the top storylines after week one in North America.

EVERYONE IS IN FIRST

Well, not really — but it is starting to feel that way after six teams finished week 3 in a tie atop the standings. Team Liquid, Counter Logic Gaming and TSM all had 2-0 weeks, while the previously undefeated OpTic Gaming lost their first two games of the season. Cloud 9 and Golden Guardians split their games in week 3 to round out the six-way tie.

Of those six teams, CLG and OpTic Gaming have been the big surprises. Team Liquid, TSM, and Cloud 9 were considered the big three in the LCS heading into the split, while Golden Guardians were a strong playoff team in the Spring Season. Though they won their first four games, it was no surprise that OpTic Gaming fell to TL and C9. Those losses aren’t worrying, though they have another tough game to open week 4 against TSM.

CLG’s 2-0 weekend was a pleasant surprise for a team that has been so inconsistent over the past few seasons. After out-lasting Echo Fox in a 43 minute game on Saturday, CLG followed that up by beating GGS despite falling behind in the early game. Kim “Ruin” Hyeong-min was continually camped without support from the rest of his team, but Tristan “PowerOfEvil” Schrage and Trevor “Stixxay” Hayes were able to farm up enough to clean up the fights started by Vincent “Biofrost” Wang’s Lux.

It’s very promising for CLG that they’re keeping pace in the LCS as they encounter the growing pains associated with incorporating Ruin into their lineup. As CLG and the other teams in the LCS keep getting stronger, it becomes harder and harder to separate the teams at the top of the standings.

Despite some growing pains with Rain, CLG is holding strong in the LCS (Photo courtesy of Riot Games)

100 Thieves have been experimenting with their roster over the past week, playing every member of their original LCS starting lineup, aside from Maurice “Amazing” Stückenschneider, in one or more academy games. To the surprise of many, it was determined that Kim “Ssumday” Chan-ho would be benched in favor of inserting Yoo “Ryu” Sang-wook into the starting lineup for his leadership. 100 Thieves are limited to one import slot among their solo laners as long as Bae “Bang” Jin-sik continues to start at ADC.

As recently as the Spring Season, Ssumday had been 100 Thieves’ best player individually. Though he had the worst KDA among LCS top laners through four games, it was still surprising to see him demoted, especially considering the struggles that Bang and Zaqueri “Aphromoo” Black have had together in bot lane. Aaron “FakeGod” Lee showed promise as a top laner in Scouting Grounds, but he wasn’t exactly lighting the world on fire in academy. Like Ssumday, he was last among top laners in the league in KDA and was struggling to find success.

However, the move did result in the first win of the season for 100T. After another quiet performance against GGS, 100T finally broke free for their first win against Echo Fox. FakeGod played a strong 8/5/6 Irelia game against rising star Colin “Solo” Earnest and the team looked more coordinated with the Ryu and Amazing combination.

It’s unfortunate that 100T must opt for this lineup, especially as Max “Soligo” Soong looks better mechanically than Ryu at this point in his career. But this lineup gives 100T their best chance to win now, and the organization still seems committed to winning in 2019, instead of committing to the growing pains of a young lineup.

TSM’s Summer Season record in games Jonathan “Grig” Armao starts: 4-0. TSM’s Summer Season record in games Matthew “Akaadian” Higginbotham starts: 0-2. It’s a tiny sample size, but the LCS season itself is a small sample size. Akaadian did have starts against top-4 Spring teams TL and FlyQuest, but FlyQuest has lost their other five games this season and Grig picked up a win over Cloud 9.

More telling than the records, though, is that TSM opted to start Grig in both games in week 3. He has come back from his wrist injuries to be more decisive in the Summer Season, something he has struggled with in the past. His jungle pathing has never been questioned, like many TSM junglers before him, but Akaadian had been the first TSM jungler in a while who didn’t hesitate to pull the trigger on engages. Watching Akaadian play in the Spring Season seems to have helped Grig, underscoring the importance of depth in an organization.

Akaadian still may have his moments in the Summer Season, but there’s no reason for TSM to move away from Grig with the current results. He has always had great synergy with Søren “Bjergson” Bjerg and the team is showing results with him in the lineup. It’s very promising to see a team as successful as TSM still wanting to improve their roster and create competition despite having their most successful season in a while last season.

Team Liquid shook off the rust of their slow start to pick up their first 2-0 week of the season in week 3. The mid lane matchup between fellow Danes Nicolaj “Jensen” Jensen and Henrik “Froggen” Hansen will be the one to watch.

Both teams are tied for first and love to play through their solo lanes. Ruin gets his first matchup against North America’s best native top laner Eric “Licorice” Ritchie.