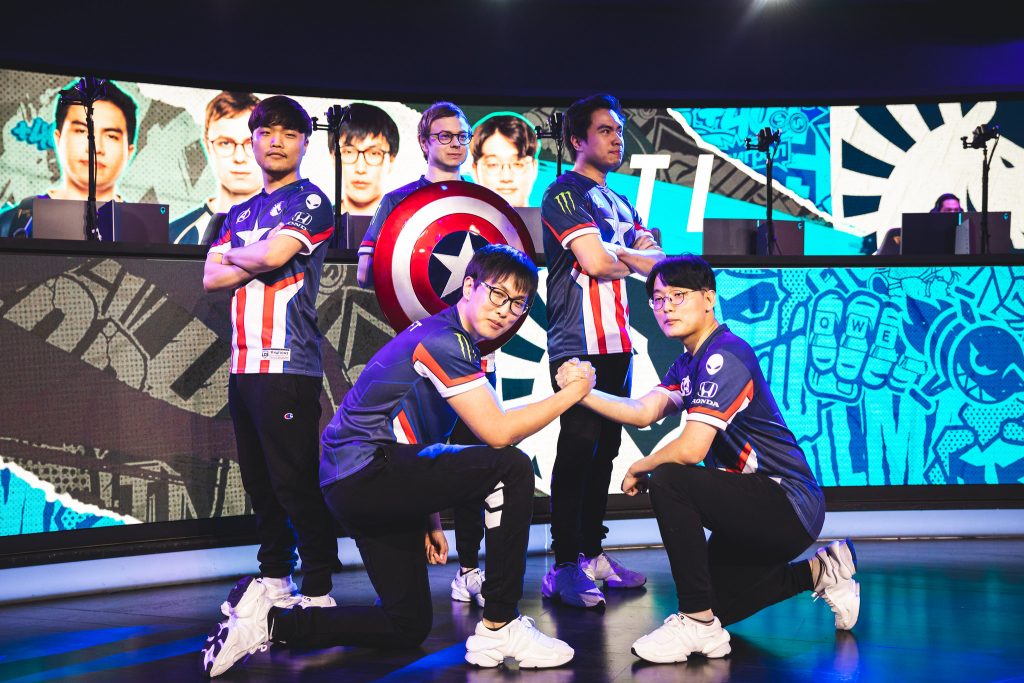 Team Liquid sit at the top of our power ranking for the LCS. The new jerseys may be appropriate. (Photo by Shannon Cottrell/Riot Games)

We’re halfway through the Summer Season in the LCS and the trajectory of the teams is taking shape. FlyQuest’s nightmare season has them near the bottom, but who has the best chance at joining the top three in the playoffs? Below is our LCS Power Ranking heading into the stretch run of the Summer Season and 2019 World Championship qualification.

The addition of Michael “MikeYeung” Yeung gave Echo Fox reason to cut ties with Lee “Rush” Yoon-jae, who was just clogging an import slot at this point in his career. Echo Fox had been trying to decide on using Kim “Fenix” Jae-hun or Lawrence “Lost” Hui in addition to Rush, but Apollo “Apollo” Price has been working his way back into the lineup even when Rush was benched for NA resident James “Panda” Ding.

The best lineup Echo Fox can field to win games includes both Fenix and Apollo, but Lost and David “Yusui” Bloomquist will probably get more chances as Echo Fox falls out of the playoff picture. Collin “Solo” Earnest had been the best performing player this season for Echo Fox, but was subbed out for Samson “Lourlo” Jackson in week 4. Echo Fox should keep an eye toward the future with their lineup going forward.

FlyQuest have been by far the most disappointing team to start the Summer Season. They finished the Spring Season in fourth place, and while not quite up to the tier of the top three in NA, had solidified themselves as a cut above the other playoff teams in the LCS. Now almost halfway into the Summer Season, they are in last place despite keeping the same roster that looked promising months ago.

What happened? Eugene “Pobelter” Park’s play has fallen off a cliff, making the team weak at the most important position in the game. Kim “Wadid” Bae-in finally got his visa issues resolved and looks to be the starter over Juan “JayJ” Guibert, so maybe that will give them a jumpstart heading into the second half of the season. FlyQuest have winnable games against Echo Fox and OpTic Gaming coming out of the break.

Are 100 Thieves good now? Your guess is as good as mine. The team went from staring at a winless season to sitting a game out of a playoff spot in a week and a half. It doesn’t feel good to be sitting Kim “Ssumday” Chan-ho on the Academy team, but the results speak for themselves. The team has played much better and more proactively with Yoo “Ryu” Sang-wook back in mid lane, even if his mechanics are nowhere near that of his prime.

Bae “Bang” Jun-sik and Zaqueri “aphromoo” Black look reborn and are finally living up to their potential together. Maurice “Amazing” Stückenschneider has fit in nicely as the team has become more aggressive with the addition of Ryu. Even if 100 Thieves get little from Aaron “FakeGod” Lee, they look to be heading in the right direction. Games against TSM and Team Liquid in week 5 will tell us how far they’ve come.

The acquisition of Heo “Huni” Seung-hoon didn’t look great in the Spring Season, but he has stepped up in the Summer Season and has played better despite no longer being the sole focus of the team. Tanner “Damonte” Damonte is the most promising mid lane talent NA has had in a while and will give Clutch Gaming great flexibility to add imports around him throughout his contract (expires end of 2020).

Cody “Cody Sun” Sun has been an upgrade over Chae “Piglet” Gwang-jin and has given Clutch the third threat they had been lacking in Spring. Nam “Lira” Tae-yoo is still a bottom tier jungler, especially for an import, but Clutch clearly don’t feel comfortable enough with their alternatives to bench him. Clutch could be one of the teams that sneak into the last playoff spot or two while continuing to develop Damonte, Cody Sun, and Philippe “Vulcan” Laflamme as the contracts of Huni and Lira expire this year.

OpTic Gaming have been the best surprise of the Summer Season, sitting in a tie for second place at the break. William “Meteos” Hartman has established himself as the starter and is in the conversation as best the best jungler in the LCS. Ditto for mid laner Lee “Crown” Min-ho, who is hopefully recovered from his break in week 4. Noh “Arrow” Dong-hyeon give OpTic a great core to challenge with in NA.

The real question is if OpTic Gaming can continue getting good performances out of their top lane. Niship “Dhokla” Doshi has gotten all the starts over Kieran “Allorim” Logue so far in Summer and has done well enough to keep his spot. It is promising that Dhokla has shown he can win on Poppy — tank play has long been his weakness — but it’s also the only one he’s shown. OpTic have two incredible trade chips in Joshua “Dardoch” Hartnett and Marcel “Scarlet” Wiederhofer if they have any interest in making a move to supplement top lane or support.

It hasn’t been a great start to the Summer Season for Golden Guardians, but it’s good enough that they’re still easily in contention for a top-four spot in playoffs. Henrik “Froggen” Hansen continues to be Golden Guardians’ best player and has given the team an added dimension by showing his capability of playing Irelia this split. Being able to play the flex picks both top and mid opens up a world of draft possibilities for the team.

Around him, the Golden Guardians are average. None of the players are in contention for best in their role, but — maybe more importantly — none are in contention for the worst either. They are a solid squad who are reliant on Froggen to carry most games. They probably have the highest floor of the non-top three teams in the LCS, but they have also yet to show a ceiling to compete with the top-three in a best-of-five series

Counter Logic Gaming are so difficult to evaluate. They have good carries in each role, but the sum of the team has not always equaled the sum of the parts. Kim “Ruin” Hyeong-min was brought in for Darshan “Darshan” Upadhyaya and has been subsequently ignored by his team over the first four weeks, left to fend for himself as he gets camped repeatedly. Rather than force early action, CLG is always content to let whichever carries aren’t getting ganked farm up in a sidelane.

We touched on Tristan “PowerOfEvil” Schrage’s champion pool problem earlier, and that remains a real concern. If the meta doesn’t shift and he cannot play melee champions, CLG will continue to be handcuffed in their drafts. Vincent “Biofrost” Wang has arguably been the best support in the LCS in the Summer, while Raymond “Wiggily” Griffin continues to improve in the jungle. CLG has a good foundation and the potential to be great, but they might need some help from a favorable meta change to get there.

Arguing between TSM and Cloud 9 is splitting hairs at this point. The unsettled jungle role between Matthew “Akaadian” Higginbotham and Jonathan “Grig” Armao is the biggest issue with TSM going forward. They need to commit to one of them soon and give him the reps to strengthen his synergy with Søren “Bjergsen” Bjerg. Grig got off to a better start in the LCS, but the team looked much better with Akaadian at Rift Rivals against the top LEC teams.

Sergen “Broken Blade” Çelik still flashes as much carry potential as any top laner in the LCS, but he has been dying too often to ganks early in the season to set himself behind in lane. Jesper “Zven” Svenningsen has not had his best split after making a crucial mistake in game 5 of the Spring Finals versus Team Liquid. TSM have as much — if not the most — potential in the LCS, but they still have far too many lapses in shot calling to challenge for the top spot.

Cloud 9 didn’t look good at Rift Rivals, but they played two days without Zachary “Sneaky” Scuderi and the whole team was rumored to be sick. Sneaky and Tristan “Zeyzal” Stidam have never been known as the strongest laning duo, but Cloud 9 will need more from them to get back to competing with the best teams in the world.

Eric “Licorice” Ritchie remains their standout carry, but he was once again exposed in international play — specifically against Gabriël “Bwipo” Rau. Dennis “Svenskeren” Johnsen and Yasin “Nisqy” Dinçer are at or near the top of their role in the LCS, giving Cloud 9 a formidable top half of the map. Cloud 9 seemingly always turn it on as playoffs and Worlds are approaching, so we expect to see good performances from them throughout the Summer Season.

Team Liquid won three consecutive LCS championships and are the prohibitive favorites to make it their favorite number this Summer. The team’s problems during the regular season are linked more to motivating themselves to compete against a region they’ve dominated for almost two years now. Outside of TSM and Cloud 9, no team seems capable of beating them in a best-of-five.

Jung “Impact” Eon-yeong went from the weak link in their Spring Season run to best performing member on the team during the Mid-Season Invitational. His stellar play has kept up in the Summer Season, leaving no clear weakness on the roster. There is no question that every player is top tier in their role in the LCS. The question is whether the team is good enough to make a deep run at the World Championship against the best of the other regions. Wins over Invictus Gaming and G2 Esports suggest that’s a possibility. But first, they must take care of business in the LCS.