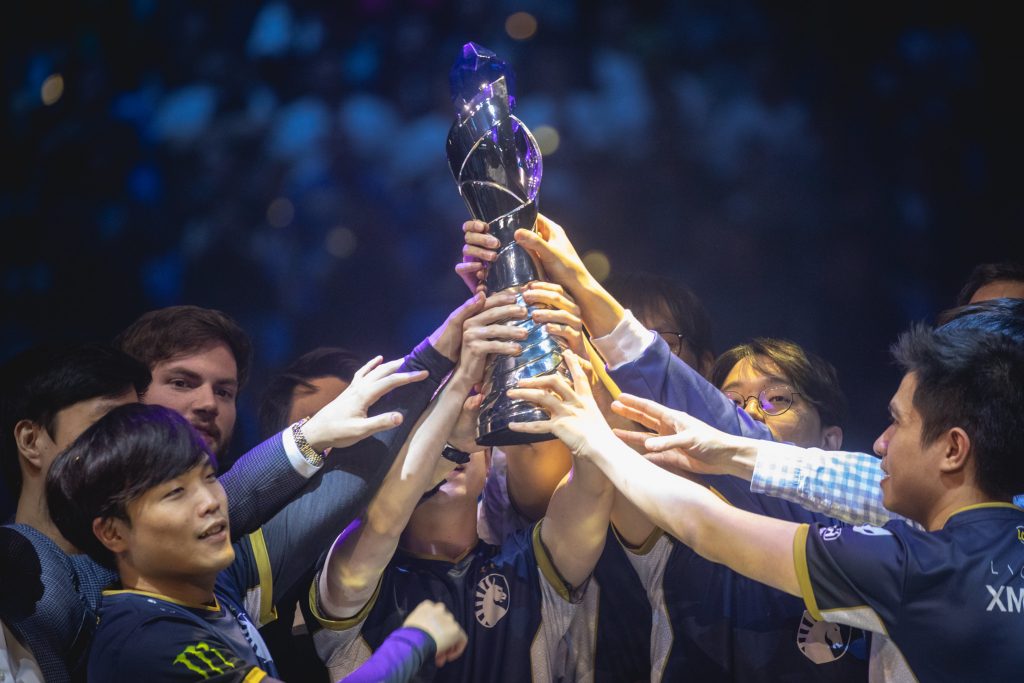 Team Liquid defeated Team SoloMid in an epic 3-2 series to win the 2019 LCS Spring Split Finals in Chaifetz Arena. Coming off two consecutive North American titles in 2018, Team Liquid still sought upgrades at mid and support by bringing on Nicolaj “Jensen” Jensen and former world champion Jo “CoreJJ” Yong-in. Those upgrades might have been the difference between a third consecutive title for TL and TSM returning to the top.

Team Liquid started things off with an unconventional pick in game 1. TSM picked Zoe for star mid laner Søren “Bjergsen” Bjerg in the first rotation, opting to ban counter pick Leblanc away from Jensen. Jensen and TL turned to Heimerdinger, a mage that gave them three early pushing lanes and can use his turrets to reactively block long distance skill shots.

While it may have been a counter pick for lane, that didn’t stop Bjergsen from dominating in team fights. The two teams fought around Rift Herald at 14 minutes for the first 5v5 of the series. Jake “Xmithie” Puchero’s Jarvan IV killed Matthew “Akaadian” Higginbotham’s Rek’Sai to kick off the fight, but TSM kept fighting. Bjergsen deleted Yiliang “Doublelift” Peng’s Sivir after his teleport, then sniped Jensen at the end of the fight to give TSM the four-kills-to-three fight win.

Less than 3K gold separated the teams at 36 minutes, an almost negligible amount at that point in the game. TSM stormed mid lane and caught Doublelift out, hitting every skill shot to just barely take him down to start the fight. Without their carry, TL quickly folded. CoreJJ’s Galio was run down, and TSM got to take both Baron and Elder Drake without contest.

TSM recalled to base, bought up items, and returned for their final push. They executed a 1-3-1 split push to knock down all three inhibitors before TL finally made their last stand. Sergen “Broken Blade” Çelik’s Vladimir closed the door on them, picking up a quadra kill to send TSM to a 1-0 series lead. He finished 11/1/6 in TSM’s 19-kills-to-11 win in 40 minutes.

TL exposed a potential weakness in their drafting on red side in game two. They were so afraid of leaving open any of TSM’s Lissandra, Jayce, and Sylas solo lane flex picks they allowed Taric and Sona through. TSM first picked Taric, then picked up Hecarim and Sona in their next rotation. Bjergsen picked Lux, showing he had his own special counter pick ready for Zoe.

Team Liquid got off to an early lead with a team fight win at dragon, but TSM were waiting for Sona to power up. That meant it was terrifying for TL when TSM took a 4-1 fight win at Rift Herald right after Jesper “Zven” Svenningsen’s Sona was picked off. Broken Blade’s Irelia continued to out-impact Jung “Impact” Eon-yeong, solo killing him in the side lane and dashing around in team fights.

TSM picked up their first gold lead of game 2 just after 26 minutes. Akaadian and Broken Blade dove TL’s back line, and Bjergsen’s Lux sniped out Xmithie’s Rek’Sai for a 3-1 fight win by TL’s top inner turret.

TSM were again down in gold at 33:30 when they found their game winning fight. Broken Blade teleported behind TL while Andy “Smoothie” Ta’s Taric ultimate stalled TL’s engage. TL were forced to a choke point in their bot jungle and were crushed. Broken Blade hit two with his ult, Zven hit his flash Sona ult, and Bjergsen hit the TL back line with his ult. TL were still alive, but had little health left and nowhere to run.

TSM tracked them down 1-by-1 over the next 30 seconds, eventually killing three, enough to end the game. TSM won game two up 14 kills to 10 in 35 minutes. Broken Blade finished 4/3/4 on Irelia, finishing with the most damage (16.7K) in the game.

Team Liquid and Team SoloMid on stage at the LCS Finals. (Photo by Colin Young-Wolff/Riot Games)

Team Liquid switched up their draft in game three, giving Impact Gangplank instead of Kennen. Impact responded when TL needed him the most, having his best game of the series. Impact thwarted multiple dive attempts on him top and using his teleport to support his team rather than play for lane.

Still, TSM had a 1.7K gold lead at 20 minutes in a potential close out game. Akaadian’s Rek’Sai was 4/0/5 for full participation in TSM’s 9-5 kill lead, peaking as TSM were seemingly on their way to the title.

But Xmithie’s Skarner made the plays when they mattered most in game three. He engaged on Akaadian at 24 minutes, and though TL didn’t kill him and get his shutdown, they picked up a kill on Smoothie’s Galio and secured vision control around Baron. Xmithie then picked off Broken Blade’s Vladimir in TL’s jungle at 26 minutes to lead to another TL fight win and mountain drake.

Impact’s Gangplank reached full build and started crushing TSM in fights. TSM started Baron to force Impact’s teleport at 34 minutes and paid the price. TL collapsed, took Baron, and took control of the game. Another pick on Smoothie’s Galio secured Elder Drake for TL and, using that buff, they were able to push and end the game. Impact finished 5/2/10, Xmithie finished 0/0/11, and TL prolonged the series with a 17-kills-to-12 win in 40 minutes.

After three very closely contested games, Team Liquid turned game four into a stomp. They swapped out their Lissandra ban for Taric on red side this time, giving Bjergsen a comfort pick but denying the Taric and Sona bot lane. That choice clearly worked out well for TL.

Akaadian and Bjergsen forced a mid gank too hard at four minutes, giving TL First Blood and two kills. Xmithie’s Skarner was there for the counter gank, allowing Jensen’s Zilean to escape and leaving TSM’s duo too close to TL’s mid turret.

The two teams then moved to a deciding game five for the LCS title. TSM used Broken Blade’s early advantage to take Ocean Drake less than seven minutes into the game. Broken Blade then went on to solo kill Impact’s Vladimir on an Xmithie gank, easily getting away with an assist from Akaadian’s Rek’Sai. Broken Blade was so far ahead early that he forced CoreJJ’s Braum to teleport top so Broken Blade couldn’t 1v2 kill Xmithie’s Skarner and Impact’s Vladimir.

TSM used Broken Blade’s advantage to take the next three drakes, including two infernals, and firm control in game five. They were up 5.4K gold at 34 minutes, and TL had no answer for Broken Blade’s side lane pressure. Then disaster struck for TSM.

Zven saw Xmithie standing on a Crystal Spire and tried to land some poke, but he got too close. Xmithie closed the gap, landing CC on Zven that allowed Doublelift’s Kai’Sa to ultimate over to Zven and finish him off. TL immediately forced Baron, bringing Impact in with teleport while Broken Blade’s was still down. TL picked up another kill on Smoothie’s Galio and Akaadian couldn’t find the smite steal. Suddenly TL had Baron, only a 2K gold deficit, and the better scaling team.

Zven went too aggressive again at 39 minutes, Arcane Shifting into two members of TL for his death by Elder Drake. That forced TSM’s remaining members to back off and allowed TL to secure it for themselves. TL used that buff to secure Baron at 42 minutes, and TSM braced for TL’s final push.

Broken Blade teleported in behind TL, but TSM had no options left in a team fight if they could not first secure a pick. TL quickly wiped TSM four kills for zero and pushed down the Nexus to secure their reverse sweep for the title. Doublelift’s Kai’Sa finished the final game 5/1/7, giving him a combined 21/12/30 K/D/A for the series. He would go on to be named Finals MVP.

This is Team Liquid’s third consecutive LCS title. However, it’s the first of mid laner Jensen’s career. He was vocal that his move was about not only competing for titles, but actually winning them. Despite coming up short earlier in his career in the Finals, notably his failure to Zhonya’s Hourglass on Ekko against TSM in 2017, Jensen was spectacular in the big games in this series. His Leblanc in game five had much more impact than Bjergsen’s Leblanc in game three.

It was a heartbreaking loss for TSM, but they can be proud of what they accomplished in the Spring Split. They rallied from a 2-4 start to finish 11-1 in their final 12 regular season games and overcame their struggles against Cloud 9 in the semifinals. They did this while incorporating three new members, including Broken Blade’s first season in the LCS. They look like the most lane dominant team in North America and will be a force to be reckoned with in the Summer Split.

Team Liquid will be the North American representative at the Mid-Season Invitational. While Impact was exploited in lane by Broken Blade, TL as a whole are one of the most controlled teams heading into the tournament. We’ll see if that will be enough to hold up against the elite mechanical talent from the rest of the world.