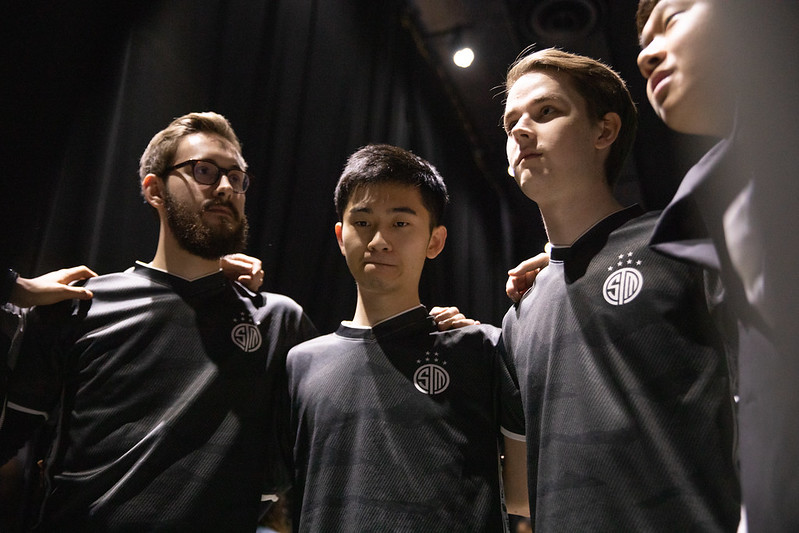 The 2020 LCS Spring Split playoffs continued in the lower bracket with TSM and 100 Thieves. 100T lost their opening match to Cloud9 3-0 to set up an elimination match with the fifth seed TSM.

TSM out lasted 100T in a tense five-game series to come out on top 3-2. They will advance to Round 2 to face FlyQuest, while 100T are the first top four seed to be eliminated.

100 Thieves opened the game one draft with a standard first pick Ornn for Kim “Ssumday” Chan-ho. Sergen “Broken Blade” Çelik is a believer that Aatrox beats Ornn in lane, so TSM counter picked that for him. TSM’s Varus and Tahm Kench have the early lane priority over Miss Fortune and Nautilus, while Orianna and Corki look to clear mid lane. 100T’s composition scales better, but TSM have a lot of early priority on the map.

TSM used that early priority to win the first skirmish at six minutes. Ssumday tried to bait Broken Blade into a fight as William “Meteos” Hartman’s Gragas was close for a gank, but Joshua “Dardoch” Hartnett was also close for TSM. With Ssumday getting the worse end of the trade, TSM won the eventual 3v3. Broken Blade picked up First Blood on Meteos and then got another kill on Ssumday after a clean TSM turret dive.

TSM then used their bot priority to be the first to roam up the river in another skirmish around mid lane. With an early 4k gold lead at 15 minutes, TSM were able to push down turrets early and get their split push going. 100T attempted to engage 5v4 bot lane, but Broken Blade’s Aatrox interrupted Meteos’ flag-and-drag, all the while Bjergsen took down 100T’s mid inner turret.

.@TSMBrokenBlade and @Dardoch dive into the @100Thieves back line and set up the game winning team fight! 1-0 to @TSM! #LCS #TSMWIN pic.twitter.com/TxxC84qsLA

TSM were up 9k gold and on Mountain Soul Point at 32 minutes when 100T felt forced to fight. Broken Blade and Dardoch instantly got on top of Tommy “Ryoma” Le’s Orianna, killing him through his flash and deleting half of 100T’s damage. Cody “Cody Sun” Sun and Ssumday were the only two survivors as TSM walked in to destroy 100T’s base. TSM took game one 13 kills to 4 in 33 minutes. Bjergsen finished a perfect 5/0/6 on his Corki.

100 Thieves clearly didn’t think the draft was the issue in game one. Just like in the opener, they banned Senna, Syndra, and Xayah before first picking Ornn. TSM again responded with Aatrox and Varus. And on and on. Each pick and each ban coming in the same exact order until game two’s draft was a carbon copy of game one. Every single pick and ban was the same and in the same order. Tony “Zikz” Gray was banking on better execution from his team in game two.

TSM got off to another small early lead, but it was nowhere near as big as in game one. Critically, TSM’s early kills went to Dardoch’s Gragas instead of Broken Blade or Bjergsen this time. On the other side, Ryoma’s Orianna was the beneficiary of 100T’s early kills.

When the teams met for the fifth dragon spawn at 30 minutes, it was obvious that 100T were now stronger in the 5v5 fights. 100T secured it to put themselves on Soul Point and won the ensuing fight. Ryoma picked up another double kill to give himself 10 of 100T’s 12 kills. After taking their free Baron, 100T were up 4.5k gold and three Ornn upgrades.

TSM made their last stand as 100T pushed their bot inhibitor turret, but 100T were too strong. 100T instantly turned on the flanking Tahm Kench/Gragas duo to pop them before turning on the rest of TSM. It got sloppy for 100T as they chased into TSM’s base, but the end result was Cody Sun and Meteos left standing against Broken Blade. Cody Sun was able to finish the Nexus before the rest of TSM could respawn and 100T took game two 16 kills to 11 in 33 minutes. Ryoma finished 12/2/4 on Orianna.

TSM took blue side for game three, forcing the draft to be changed up even if the teams would have run the same draft a third time. TSM prioritized Kalista with their first pick, while 100T went for Sett. TSM have consistently left counter pick for Broken Blade, giving him Pantheon into Sett. TSM’s composition had a weird mix of champions who want to engage in Olaf and Pantheon, versus their Azir who wants to sit back and fight front to back. 100T lacked some hard engage, but Sett, Viktor, and Miss Fortune were perfect picks into TSM’s engage.

A first blood that befuddled the casters… SOLO KILL for @TSMBrokenBlade! #LCS pic.twitter.com/BCZuogVsyx

We saw what Broken Blade likes in the Pantheon/Sett matchup immediately. Broken Blade picked up First Blood on Ssumday at level two, putting him hugely ahead in the lane. Broken Blade also showed us that Pantheon’s Aegis Assault is the perfect counter to Sett’s Haymaker.

TSM were in control of the early game and picked up the first two dragons. But by the time the third dragon spawned, Pantheon and Olaf had begun to lose some of their early effectiveness. This became an issue for TSM where they both wanted to dive onto 100T’s carries, but Azir and Kalista weren’t able to follow up into the counter engage of Sett, Viktor, and Miss Fortune. Instead of using their gold lead to set up around objectives and force 100T into them, TSM continued to ram themselves straight forward into their own death.

The final nail in the coffin for TSM was a pick onto Dardoch at 35 minutes. With it, 100T played around fog of war and found another pick on Bjergsen. That led to Baron, a final push, and match point for 100T. 100T won game three 17 kills to 10 in 39 minutes. Cody Sun positioned perfectly throughout the game to earn a 9/0/8 score.

TSM went for pure lane dominance in game four. The familiar Varus and Tahm Kench once again would have early pressure on Miss Fortune and Nautilus. Meteos picked Sejuani into Dardoch’s Meteos to give TSM even more early pressure, perhaps prompting Broken Blade to go ahead with his Kalista pick into Ssumday’s Aatrox. With Zoe’s access to early summoner spells giving her an early advantage mid, TSM had advantages in every role. They just needed to make sure 100T didn’t stay close in gold through the early to mid game.

TSM made sure 100T did not keep it close. An early invade from Dardoch and Bjergsen on Meteos gave Dardoch First Blood at 3 minutes. That made it so that Meteos went from unlikely to unable to influence his lanes early. TSM built 20+ CS leads in every lane by 12 minutes and had total control of the map.

TSM didn’t need to get kills to extend their lead. With the pressure advantage everywhere, they took turret plates, turrets, and CS advantages to build a 5k gold lead at 17 minutes. 100T stole the Rift Herald away from them, but TSM picked up another kill and built a 10k gold lead by 25 minutes.

100T went for a final desperation fight at 32 minutes but were too far behind. Broken Blade flanked with Kalista, ulted Dardoch’s Lethality Rek’Sai into 100T, and TSM blew up 100T to force a fifth and final game. TSM were up 13 kills to 1 and 15k gold when they pushed down the Nexus at 33 minutes.

TSM finally got their hands on Xayah and Rakan in game five. Kasper “Kobbe” Kobberup and Biofrost were 5-0 on the duo doing the regular season. 100T went back to Miss Fortune and Nautilus again, again opting for a wombo-combo team fight with Sett, Viktor, and Sejuani. TSM rounded out the draft by giving Broken Blade his fifth consecutive counter pick, this time picking Gangplank into Sett. Both teams had engage, scaling, and good team fights.

100 Thieves got the better of the kill trades early, but large CS advantages generated by Bjergsen and Kobbe kept the gold relatively even through the mid game. A team fight mid lane at 28 minutes traded three kills for three evenly, but 100T were able to take a three dragon to two lead with Cody Sun’s health advantage.

Another team fight started mid at 33 minutes as the teams postured for the dragon. 100T picked up kills on Biofrost and Dardoch to seemingly secure their Cloud Soul, but Bjergsen had other ideas. His Deathcap Zoe flew in to one-shot Cody Sun from full health, forcing 100T to abandon the dragon. TSM then used their numbers advantage to secure it for themselves to set up Soul Point for both teams.

Now with Last Whisper, Kobbe was able to do damage to the full armor Sett and Sejuani in the Cloud Soul fight. Though the teams traded one for one, TSM picked up the objective to set themselves up for a win.

"OH MY GOODNESS, @Bjergsen!"@TSM take down the Nexus and win game five against @100Thieves! #TSMWIN pic.twitter.com/H440MSGB92

TSM took a risky fight near 100T’s mid inner turret, but Kobbe popped Ryoma’s Viktor and TSM eventually won the extended fight. With a four to one advantage, TSM went for the end without Baron. Cody Sun did his best to clear the minion wave and stall for respawns. 100T killed three of four TSM members, but Bjergsen last hit the Nexus with a fraction of his health remaining to send TSM on to Round 2. TSM were down 2.5k and 15 kills 23 when Bjergsen destroyed the Nexus at 44 minutes.

The LCS playoffs now move on to Round 2. Top seed Cloud9 will open it up against Evil Geniuses on Saturday, April 11th at 1 p.m. PST.