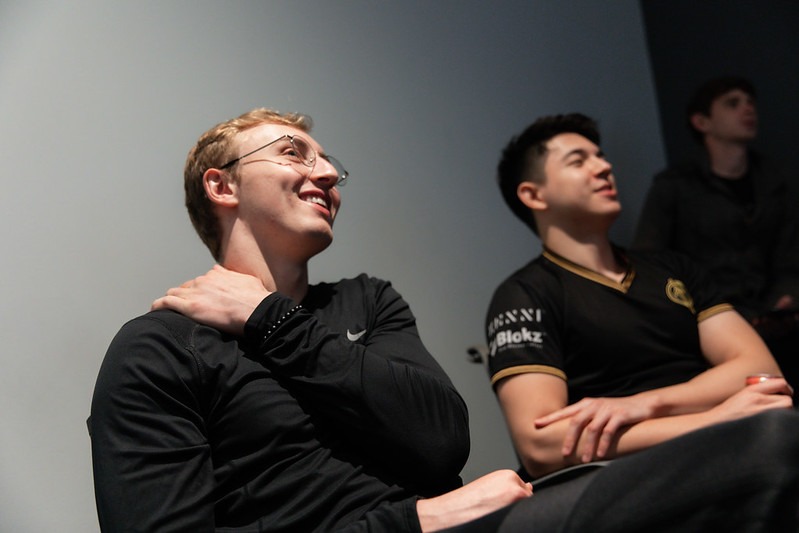 Week nine of the regular season wasn’t enough to settle the 2020 Spring Split playoff picture in the LCS. Three-way ties for second and sixth place made four tiebreaker games necessary. In the end, Evil Geniuses secured the second seed, while Golden Guardians took the sixth and final playoff spot.

It was a relatively quiet early game, as both teams were feeling each other out in such an important match. Paul “sOAZ” Boyer kicked off the game with First Blood at 9 minutes. Jake “Xmithie” Puchero’s gank helped secure it, but Xmithie then fell to Matthew “Akaadian” Higginbotham’s Pantheon ult for a counter kill.

The two teams met to fight for the third dragon of the game at 18 minutes. With both junglers there to contest, Akaadian won the smite battle and secured infernal for Dignitas. Dignitas then won the ensuing team fight three kills to two, extending their gold lead to over 1.5k.

By securing their third dragon on the next spawn, Dignitas were at Soul point at 29 minutes. The possibility of Infernal Soul meant Immortals were forced to contest. sOAZ’s deep flank resulted in a one for one trade to open the fighting, but Dignitas were advantaged for trading their support for IMT’s top. Xmithie zoned Akaadian off dragon to secure it for IMT, but IMT lost three members in the process. Dignitas then just transitioned to a free Baron to break the game open.

.@dignitas take down @Immortals and will face off against @GoldenGuardians later this afternoon for the final spot in the 2020 #LCS Spring Playoffs! #DIGWIN pic.twitter.com/ijiDPRsfJq

Dignitas used Baron to crack open the mid inhibitor and set themselves up for a free Infernal Soul on the next spawn. Instead of allowing it to go, IMT ventured too far into their jungle and got run down on the retreat after Dignitas secured Infernal Soul. After a four kills to one team fight win, Dignitas marched it in through mid lane to destroy the Nexus. Dignitas won 15 kills to 8 in 36 minutes to advance to the second tiebreaker against Golden Guardians.

Immortals are now officially eliminated from playoff contention just two days after losing one of the biggest leads of the season. They will remember being so close to qualifying for playoffs, only to lose three straight.

As expected, Colin “Solo” Earnest earned the start over Omran “V1per” Shoura in top lane for FlyQuest. Unfortunately, Solo had his worst game of the season. Solo attempted to make a big play on Kim “Ssumday” Chan-ho at 9 minutes but was roamed on by both Cody “Cody Sun” Sun and William “Stunt” Chen to feed Ssumday 300 gold and allow 100T to transition it into a free Rift Herald.

With the early map pressure advantage of killing all three outer turrets, 100T were able to secure the first three dragons of the game without contest. 100T were up almost 7k gold when the next Infernal Drake spawned at 23 minutes, but FlyQuest had no choice but to fight. Cody Sun picked up an early double kill on Tristan “PowerOfEvil” Schrage and Lee “IgNar” Dong-geun before Tommy “Ryoma” Le came in with a great teleport flank to round up the rest of FlyQuest.

100T picked up the three remaining members of FlyQuest, secured Infernal Soul, and were in total control of the game. Lucas “Santorin” Tao Kilmer Larsen went for a blind hero steal on Baron at 26 minutes, but he was several thousand HP early and got bursted down before he had a chance to smite. 100 Thieves secured Baron and pushed for the win.

100 Thieves won their game with a final score of 20 kills to four in 29 minutes. William “Meteos” Hartman finished a perfect 2/0/10 on Sejuani, the only one of his teammates not to die. Meanwhile, Solo’s 1/6/1 Aatrox performance opens the door for V1per to get another look in top lane in the first round of the playoffs.

Golden Guardians dropped Rift Herald in top lane at 12 minutes to kick off the first big engagement of the game. Heo “Huni” Seung-hoon used his teleport to flank Golden Guardians and Dignitas picked up two kills for zero to extend their early kills lead to three to zero.

However, Golden Guardians were the team to get the dragon stacking started. They picked up the first two uncontested, setting up an opportunity to get Mountain Soul on a team with Sett, Varus, and Braum. Interestingly, Golden Guardians used a team fight win at 25 minutes to secure Baron over Mountain Drake, opting for the more immediate gold influx and power. That allowed Dignitas to even the dragon count at two apiece.

The game descended into what is commonly known as an NAram, as both teams continuously group mid lane and ran at each other. The teams traded the next two dragons, setting up Mountain Soul point for both teams at 41 minutes. The teams once again fought in mid lane, started by Akaadian’s Pantheon ult. Huni’s Renekton was the first to fall, while Kevin “Hauntzer” Yarnell’s Sett barely survived with his shield.

With the man advantage, GGS had control of the dragon pit and secured Mountain Soul. Knowing that they would be highly disadvantaged from this point forward, Dignitas attempted a desperation Baron while GGS finished the dragon. Dignitas only made it halfway through Baron’s health bar before they pulled off and conceded that they could not finish it before GGS arrived.

It's Golden Guardians vs the world! With this victory we secure the 6th and final Playoff spot! #GGWIN

The teams reset and fought once again around Baron. With Mountain Soul, GGS had an easy time disregarding the Ashe and Viktor poke of Dignitas. GGS picked up four kills in the extended fight and secured Baron without contest. Armed with Baron and Mountain Soul, GGS were finally able to crack Dignitas’ defenses and end the game. GGS secured the sixth and final playoff with a 16 kills to 13 win over Dignitas in 46 minutes.

100 Thieves took a strong early lead in the fight for number two seed. Dennis “Svenskeren” Johnsen attempted to kill Ssumday’s Sett top, but he and Colin “Kumo” Zhao could not burst through Ssumday’s shield. Ssumday picked up kills on both Kumo and Svenskeren, while Meteos fell to Svenskeren. Kumo then died again a minute later in the top river, giving 100T another kill as they secured Ocean Drake.

Evil Geniuses tried to respond by targeting Ssumday. A three-man dive highlighted by Daniele “Jiizuke” di Mauro’s Malzahar suppression netted them one kill, but their next attempt only put them farther behind. 100T were ready for the counter gank, allowing Ssumday to escape and teleport back behind EG. 100T picked up three kills for two, dropped Rift Herald for turret plates top, and already had a 2k gold lead at 12 minutes.

100T were on Cloud Soul point at 24 minutes when they just fell apart. They opted into a fight in the bottom river, despite their team not being grouped together. EG picked off kills on Cody Sun and Ryoma to secure the dragon, then found another kill on Stunt in 100T’s top jungle. That extra death allowed EG to take Baron and now EG suddenly had a 4k gold lead.

The @LCSOfficial Spring Split script is progressing exactly according to plan…

Find out the next step in our Master Plan as Evil takes the 2nd seed heading into the playoffs! 😏 #LIVEEVIL pic.twitter.com/rSIufEagTm

EG used that Baron to push top. Bae “Bang” Jun-sik’s Aphelios sniped out Ryoma, while Stunt died trying to block for him. Suddenly, the game was over. EG dove straight onto 100T’s Nexus turrets, killing Cody Sun and Meteos to leave Ssumday alone in the fountain. They won the game 13 kills to 9 in 27 minutes to secure the second seed in the playoffs.

LOOKING AHEAD: LCS PLAYOFF ROUND 1

Evil Geniuses are riding high coming off their win over 100 Thieves to secure the second seed. They also defeated FlyQuest both times in their regular season meetings. They have become very focused around Jiizuke and Bang, so expect them to get priority in the draft. Meanwhile, FlyQuest dropped their games to GGS and 100T to close the season and seem unsettled on their top laner heading into playoffs. Considering top lane is the weak point for EG, they’ll need whoever they choose to put on a good performance.

Despite 100 Thieves defeating FlyQuest in the tiebreakers, Cloud9 chose them as their first round opponent. Cloud9 have one of the few top laners in the league who can go toe-to-toe with Ssumday in Eric “Licorice” Ritchie, while having advantages in every other role. They are the team to beat in the playoffs. 100T’s best shot is giving Ssumday a winning matchup and giving him every resource he needs to carry.